It’s about 5:45pm and I’m waiting for an the elevator after touring a 12th floor king studio apartment hotel room. When the stainless steel doors of the elevator part, I’m greeted by a guest of the hotel and as I go to press my floor number I see it is already lit. Floor 3. My man-bunned elevator friend and I are both traveling to the same floor.

Since it is New York City and we are in an elevator, we experience that awkward moment of silence after saying hello and we soon cascade into a silence of avoided eye contact. Typically, these moments of “do we make small talk or remain silent?” are soundtracked by elevator music of corny do-do-do-da-dahs and minimalist percussion; a few groovy yet mundane guitar riffs here and there if you’re lucky. But not in The Assemblage John Street. The Assemblage is hip, trendy, luxurious, and highly curated.

Bumping in the elevator is music that I can only describe as a Tycho sunrise set from Burning Man. It’s minimal, it’s deep house, it has international as well as intergalactic elements, and as my new elevator friend and I are transported nine floors lower I descend in my mind to the playa of Black Rock City, just as the sun is beginning to rise over the hazy desert horizon after a long and strange night.

“It’s so,” I say to my elevator friend pointing to the elevator speakers, “…Burning Man?”

My man-bunned acquaintance laughs, “Dude,” he says, “this whole hotel is Burning Man.” 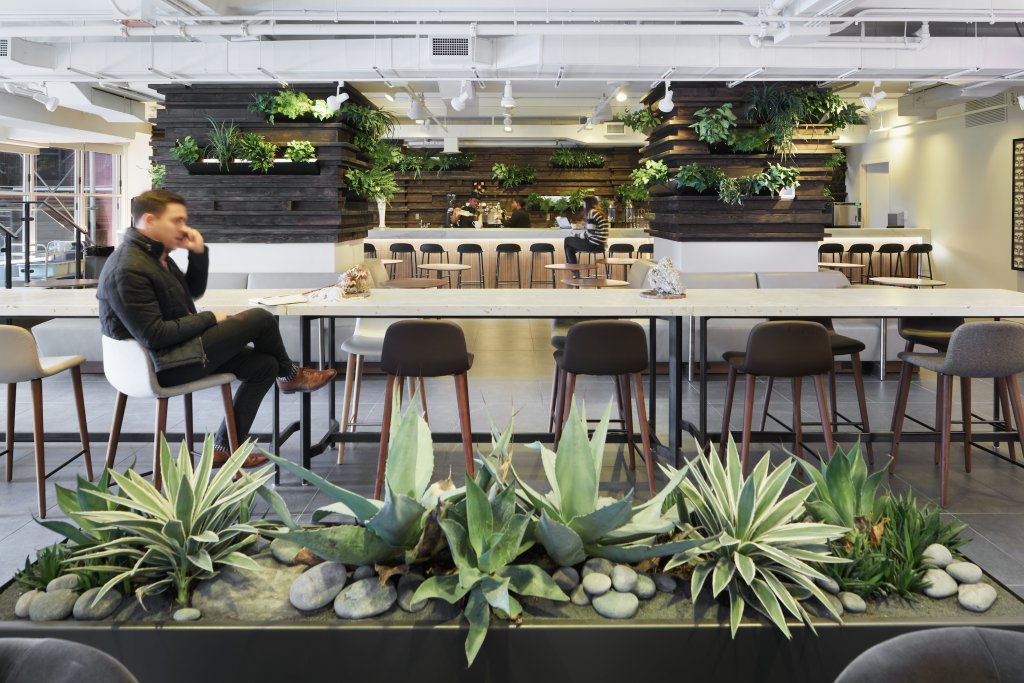 There is some truth to Man Bun’s words. From the ayurvedic restaurant, intention-setting fountain at the front desk, living plant art on the walls, bountiful yoga classes, and massive gong by the front door, there is certainly an emphasis on wellness, unplugging, spirituality, and nature. It’s Burning Man without the desert, camping or wild revelry. There is no bar in the hotel, but there is a focus on making connections, friendships, and creative collaborations with strangers on the floor pillows of the coworking space. From a section of The Assemblage’s “about” section: “John Street offers a friendly, open-minded place of convergence and growth for those at the frontier of social change, self-exploration, and discovery.”

I ask my elevator friend a second question before we approach our stop. “Are you going to the sound healing meditation class, too?”

“Of course, man,” he says with a smile that is not only as wide as a New York City avenue, but also the breadth of the Mojave desert.

The Assemblage John Street is the second and largest project for the brand. Located 2.5 miles (and only a few subway stops) from the John Street location is the brand’s first property, The Assemblage NoMad, a 12-floor co-working space (starting at $200 per month) complete with hundreds of communal hot desks and private offices, four meditation rooms, a restaurant, and a tranquil rooftop garden. Also part of The Assemblage family is The Sanctuary, a nature retreat 2 hours outside of the city designed around “reconnecting with nature,” with workshops in “self discovery” and retreats for specific groups, like June’s all women weekend.

With the success of NoMad as a popular coworking and lifestyle space in New York City,  The Assemblage John Street opened this past spring to offer an extended experience to overnight guests and short term visitors of Manhattan. The concept comes from an emerging need for short term rentals in large cities and takes its place somewhere between the international SoHo House and NYC-based WeWork, who just launched their newest hotel, WeLive.

Each of the property’s 79 room apartments (starting at $359 per night) are available for both short and extended stays with full use of the property’s coworking spaces—nearly 300 hot desks, lounge seating, three meditation rooms, a tea ceremony room (I attended my first cacao ceremony on my last morning before departing) as well as two calming terraces, a rooftop patio, restaurant, yoga studio, AND an elixir bar (I sampled the Lucid Dreaming elixir before going to sound healing- which was, to say the least, a wild, wild time.) 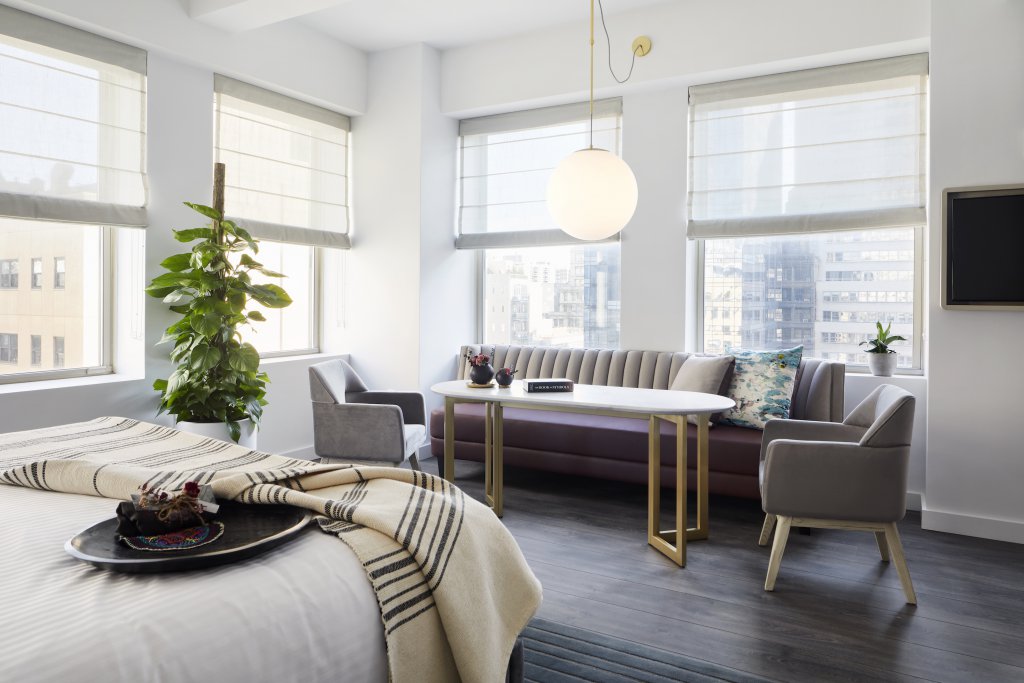 As the class convened (and my elixir kicked in), the Himalayan chimes and gongs were readied in the sound meditation room. As everyone situated themselves comfortably on the floor, I chatted with a few of the incoming participants. Among the twenty sound meditation enthusiasts were fashion designers, tech start-up big shots, writers exhausted by their old routines of traversing the city in search of spacious and WiFi-capable friendly cafes, as well employees of larger companies who had leased out The Assemblage’s more private office spaces.

Many of the participants were using the sound healing meditation as a relaxing break before working long into the night while others were winding down after a heavy day of meetings and emails and phone calls and screen staring. I overheard many of them of them planning to stay beyond  the meditation for the evening talks and events that happen a few times a week, from “Organize and Meditate Presents: White Fragility” to the screening of The Narwhal’s Wake.

Wherever they were or weren’t going after, there was an intimacy among them—it doesn’t seem logical to join The Assemblage if you don’t believe in collaboration, friendliness, social and environmental engagement.

Soon the long-haired instructor dressed loosely in linen pants instructed us to lay on our backs on the pillows. The session began with chimes and bowls before booming into gongs—ending an hour later with a chorus of chants.

From Forbes to CNNMoney, New York City always finds itself atop lists of the United States’ most stressful cities. The reasons are predictable and endless: the highest population density, escalating costs of living, serious lack of greenspace (except for Central Park).

But in the concrete jungle of the Financial District, The Assemblage John Street offers a little bit of nature—or at least the reminder of it with biophilic design—with garden terraces and rooftops, a commitment to natural lighting, preserved tree fungus ornamenting hallway walls, hundreds of cacti spread across the coworking floors, as well as the hotel’s moss-coated entrance tunnel (as well as  the live moss installations in each hotel room) that infuse the entire building with a sweet, earthy perfume.

The greeting scent of the entrance’s moss alone provided me with instant rejuvenation after walking the loud, trash-piled sidewalks and sewer-steaming streets of Manhattan (honestly, what the hell is steaming from those sewers?!). As a nature lover and tree hugger, I adored these touches of the natural world blending kindly with an urban work space, for it’s been estimated we spend nearly ⅓ of our lives at work—some  90,000 hours.

Moving to the countryside and truly “connecting” with nature isn’t practical for everyone— so if we must live in a mega-city and we must spend 90,000 hours of our life at work—let all coworking/living spaces, hotels, homes, and as many public spaces as possible be filled to the brim with cactus and moss and Cateracterum Palm and fiddle leaf trees as well as anything else from the most glorious and lofty kingdom, Plantae.

Let us smile in the presence of plants.

Let us not overlook biophilia as a hip trend set by luxurious hotels and coworking spaces by rolling our eyes like we do when our friends tell us their Burning Man tales—let biophilia be the bedrock of our future planning and commonplace in public spheres.