Gus’s Way is a little street on the southern side of Telluride, Colorado by the town’s winsome free gondola, named in Kenworthy’s honor after his 2014 Sochi silver medal in freeskiing. 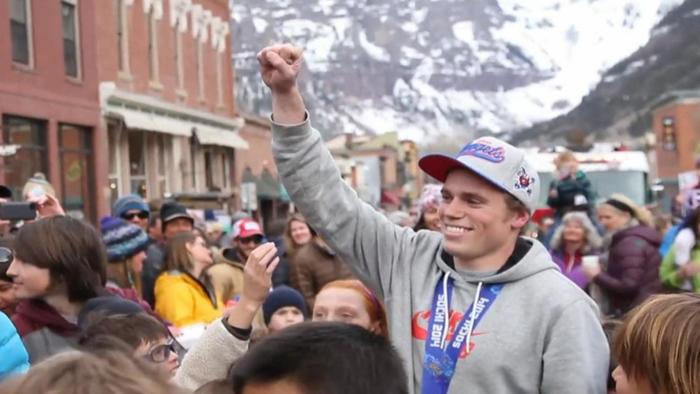 Since competing in Sochi, saving puppies, and coming out on the cover of ESPN Magazine in 2015, Kenworthy has established himself as a stereotype-breaking star in the heteronormative atmosphere of action sports. While much of the world cheers him on in PyeongChang, no one is prouder of him than his small hometown nestled in a cozy box canyon in southwestern, Colorado.

Flying across the globe to PyeongChang isn’t a possibility for most of us, but a trip to the town that raised three of the game’s Olympians (also competing from Telluride are Keaton McCargo and Hagen Kearney) is a highly recommended, once in a lifetime experience for visitors looking to escape city life, chase pow, do-si-do into laid-back mountain culture, and be inspired the spectacular vistas Telluride generously deals.

It is true that most ski resort towns have small populations and accordingly minuscule queer populations. But, what sets Telluride apart from other ski towns, is its embrace of progressive art, film, and music festivals that have been running for decades since the ski resort’s founding in the seventies. With the skiing came hippies, trustafarians, bohemians, and jam band groupies that infused the once rural mining town with a mellow, accepting, and open-minded culture.

Telluride Gay Ski Week (February 24th to March 3rd, 2018) is the queerest time of year for the town which attracts over five-hundred proud attendees. While the focus of the event is for die-hard skiers and eager newbies to take turns on the town’s legendary slopes, other events like hiking, angling, and apres-ski revelry fill the week. Organizer Rosie Cusack says this year’s lineup is the “best of the best.” Performances include Leslie Jordan, Frankie Grande (Ariana Grande’s brother), and RuPaul’s Drag Race Season 3 Winner – Raja Sultan, alongside many others as well as a nightly routine of DJ parties around town. Cusack says, “The Telluride Community, business owners, and town government open their doors for this event.” The pride flags on main street help show the full support of the community for a festive week. For more on gay ski weeks, see INTO’s 2017/2018 Ski Guide. 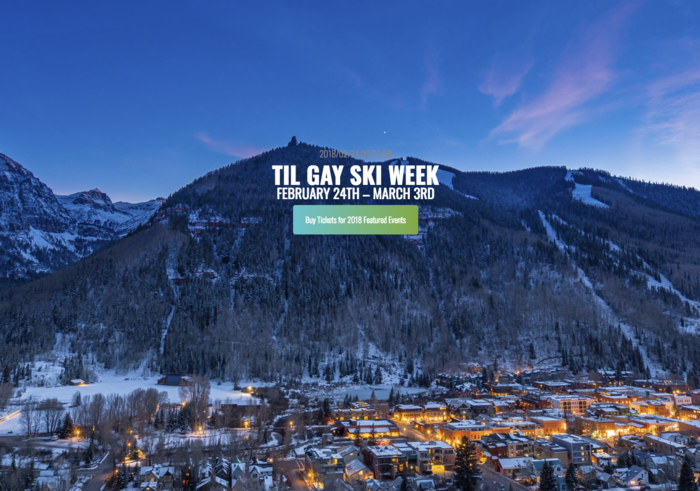 Telluride Bluegrass Festival, now in its 45th year, happens every summer around the solstice (June 21-24th, 2018) and brings together the friendliest festival crowd I’ve ever encountered. I’ve been three times with my local friends and would go every summer of my life if possible. Last year, out singer Brandi Carlile took the stage, gave a beautiful speech about acceptance of queer rights during a troubling administration and stripped her poncho off during the chorus of her last song. This year, legendary singer and icon Emmylou Harris leads the lineup for a festival full of dust kickin’, hula-hooping, Chacos, tie-dye, river swims, and late-night impromptu campground jam seshes. 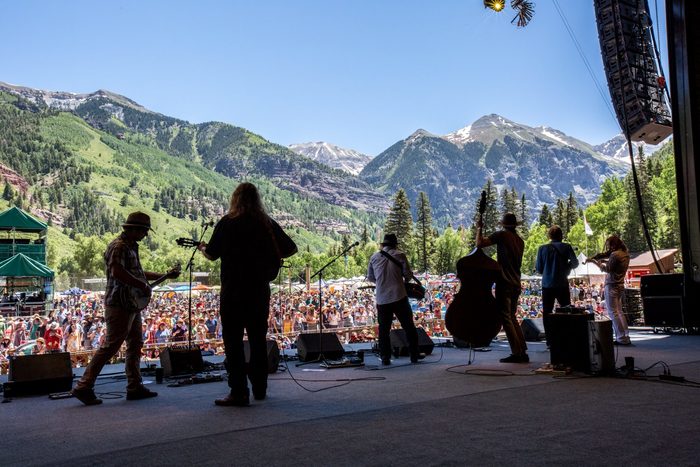 Other whimsical times to visit are the Telluride Film Festival (August 31rst to September 3rd, 2018) which featured “The Shape of Water” and “Battle of the Sexes” and plenty of nonchalant celebrities as well as the Literary Arts Festival (May 18th-20th, 2018) and Telluride Mushroom Festival (August 16th-19th, 2018.)

Adventurers – In winter, hardcore skiers will be delighted with Telluride’s hike-to-terrain, particularly an ascent of the ski resort’s highest point, Palmyra Peak (13,320’) which is an astoundingly epic hour and a half climb to an airy summit with dramatic views of the craggy volcanic formed peaks of the high San Juans and a narrow chute down over 1,500’. And in summer, be sure to have a go at Telluride’s Via Ferrata with Telluride Mountain Guides, a unique mountain climb on the “iron path” up the mountain’s vertical walls. 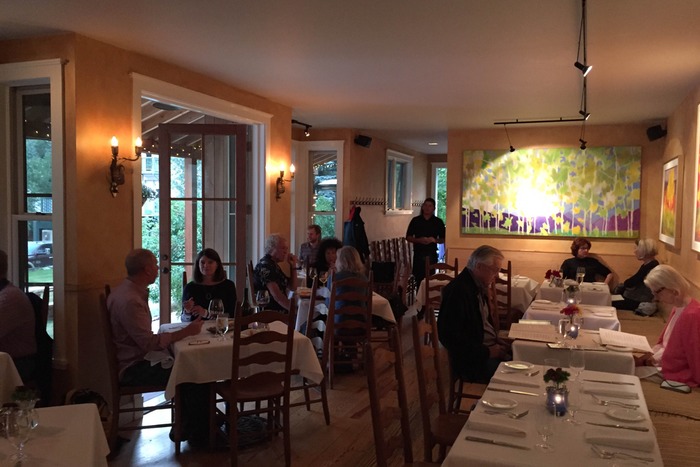 Foodies – Telluride is a gourmand’s alpine dream. For the best dinner in town, try the modern 221 South Oak which serves two separate menus, one that’s meat heavy and one exclusively for vegetarians. The restaurant is a proud project of Chef Eliza Gavin (from Top Chef season 10). Find the best breakfast burritos before hiking or skiing at The Butcher and the Baker Cafe on main street and be sure to have the Telluride classic cocktail: The Flatliner, a delicious espresso martini with Telluride Distillery vodka, espresso, Kahlua, and Bailey’s Irish Cream. And for a truly unique dining experience, book a dinner with Telluride Sleighs for a horse-drawn sleigh ride to a warm tent for an incredible Colorado cuisine dinner in a cozy tent with views of the entire region.

Even as one of the most remote ski towns in the country, Telluride is surprisingly easy to get to with direct flights to nearby Montrose Airport from major hubs like Los Angeles, San Francisco, Chicago, New York, Dallas, and seven other major hubs. There are also direct flights available from Denver to the breathtaking Telluride Regional Airport (5 minutes to town). The Telluride Express drives you 67 gorgeous miles (with views of the Dallas Divide and Ralph Lauren’s stunning Double RL Ranch) before snaking along the San Miguel River and entering the dramatic, box canyon ski town.

Telluride is divided into two sections: Town and Mountain Village, which are connected by the only free gondola in the world (a handsome 13-minute ride.) Town is where most locals live and contains a grid of streets lined with colorful Victorian homes, historic brick buildings, and wonderful dining and entertainment options. The best pick in town is The Hotel Telluride, which has classic Colorado charm, hot tubs, and is walking distance from every venue in town. 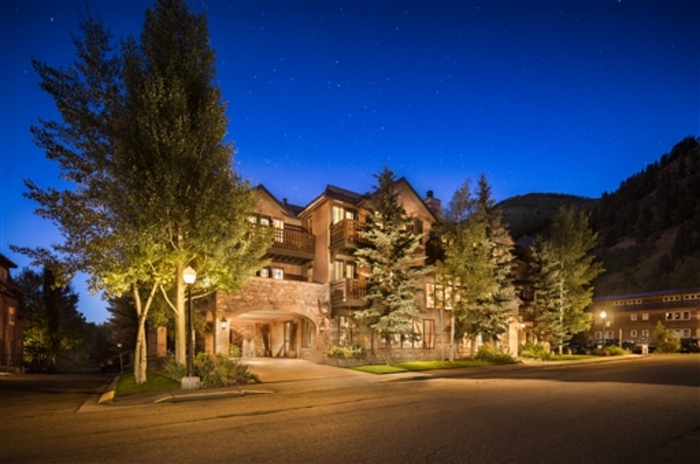 Mountain Village has much more of the resort feel comparable to Vail Village and Aspen’s Snowmass with large capacity hotels and condos. While it has less personality than town, the hotels cater to a more opulent clientele, especially the Auberge’s Madeline Hotel and Residences, with a stunning private pool and spa. 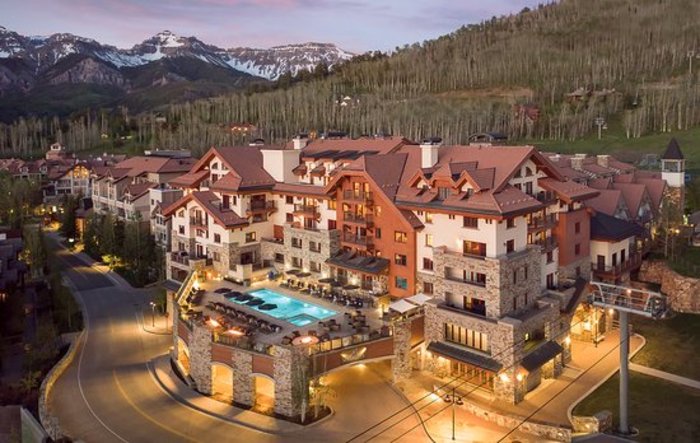