Ireland has made history again.

Leo Varadkar was elected the European nation’s first openly gay prime minister after winning his party’s election on Wednesday. Making Varadkar, the openly gay son of an Indian immigrant, poised to be just one of a handful of openly LGBTQ politicians to lead a nation—a short list that includes Luxembourg’s Xavier Bettel and Iceland’s Johanna Sigurdardottir.

But while Varadkar’s history-making moment has made international news, there’s one place it hasn’t been a headline: his own country.

Before Varadkar joined the prime minister race, he came out publicly during the 2015 campaign for marriage equality, when Ireland became the first-ever nation to legalize same-sex unions through popular vote.

But since coming out, the former Minister of Health’s sexuality has barely been mentioned in mainstream media coverage—even during the election. Brian Finnegan, the editor of Ireland’s only LGBTQ newspaper, Gay Community News, told INTO during a phone interview that it wasn’t a story at all until the week of the party vote.

“The reason it’s not a huge story here is that the Irish people don’t really care about what their politicians do in the bedroom,” Finnegan said. “They really care more about their policies and what they stand for.”

With Varadkar’s sexuality being treated as a non-issue, LGBTQ activists in Ireland say that represents a major step forward for a country that has made significant strides in equality in quite a short amount of time. A country with a long history of discrimination.

When openly gay lawmaker David Norris ran for president in 2011—a symbolic position in Irish politics—he was the target of a smear campaign that destroyed his run for office.

Norris, who spoke over the phone with INTO prior to last week’s election, claimed that the media told “every conceivable kind of lie” about him. They alleged he was a blind alcoholic and a pension fraud. Even worse, his opponents spread rumors that he was a pedophile who advocated parents have sex with their children. 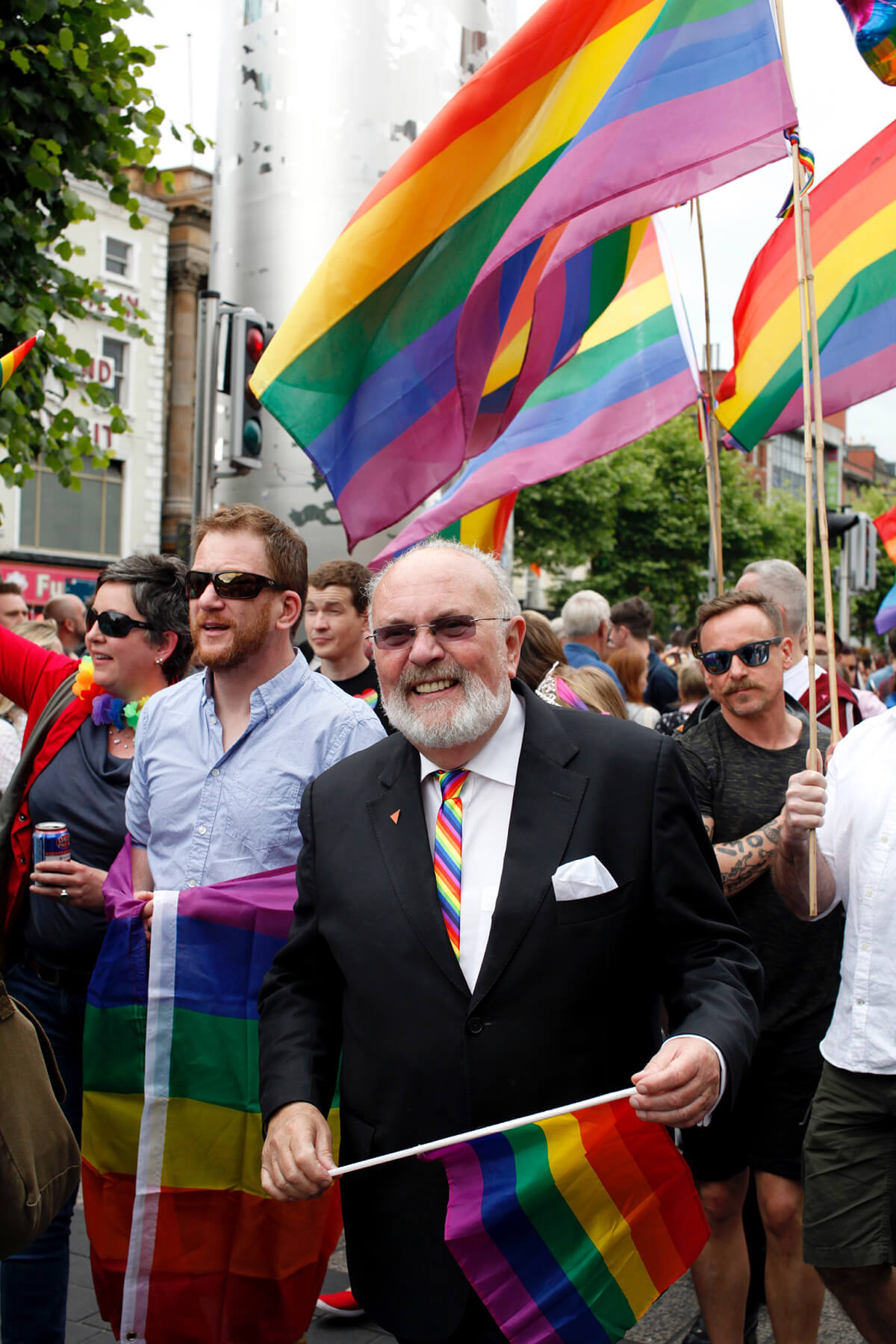 “I was attacked by the media, and a large part of it was homophobia,” Norris said. “It was a different lie every single day. I kept a dignified face in public, but I was devastated personally.”

Norris, who would later sue for defamation, claimed that critics of his campaign would make jokes on the radio where they imitated the noises that he would make while having sex with children. Someone even created a fake website trolling his campaign, and a message on the homepage read: “Hello, my name is David Norris. I’m a homosexual. A homosexual is someone who interferes with little boys.”

The 73-year-old politician, who has been working for equality for five decades, has watched his country, where homosexuality was once illegal, become an international leader in LGBTQ rights. Norris, who was first elected as an independent senator in 1987, challenged the country’s prohibition on same-sex relations the following year. Although the European Court of Human Rights sided in his favor, homosexuality wouldn’t be formally decriminalized until 1993.

On top of this, the 1922 Censorship of Publications Act allowed the government to target LGBTQ news publications, frequently serving to stifle any positive representation of the community.

“We had this aura of criminality that infected and pervaded every single aspect of Irish society,” said Tonie Walsh, founder of the Irish Queer Archive. “All aspects of male homosexuality were considered taboo and illegal. It stopped mainstream Irish society from engaging any of our concerns or our fears.”

“It was extremely repressive and quite frightening,” Norris added. “If you were exposed as gay, you could lose your job, and you could be put in jail.” 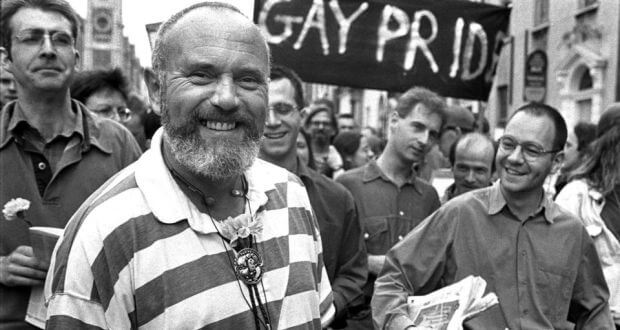 Many LGBTQ people fled Ireland in the 70s and 80s for countries viewed as more accepting—like the Netherlands and the United Kingdom.

Finnegan left for London in 1985, where he discovered a world of gay bars and drag queens he didn’t know existed; many of these spaces had been forced underground. Walsh stayed in Ireland, where gay people would remain silenced throughout the 80s and often persecuted.

Walsh and his boyfriend were kicked out of a bar in 1981 for holding hands, but there was nothing they could do about it because LGBTQ people were still not protected under Irish law, and the police wouldn’t pursue cases of anti-gay violence or harassment. You would be laughed out of the station.

“It was not a pretty time to be gay or lesbian,” Walsh said. “The endemic homophobia was shocking. I cannot overstate that.”

When Ireland’s first Gay Pride Week was held in 1980, there weren’t enough people to march. Attendees handed out pink carnations and fliers reading, “Gay liberation is your liberation.” With thousands coming out for last year’s Pride event, it’s clear the country has taken that message to heart in the years since.

When homosexuality was decriminalized in 1993, there was an “explosion in gay culture across the island” during a time of rapid economic growth. Once LGBTQ people were allowed to live openly and freely, it not only helped with visibility of the community but also led to the first financial boom in Ireland’s history. Known as the “Celtic Tiger,” gay bars began to operate openly, even popping up in smaller cities outside the major metropolitan areas. 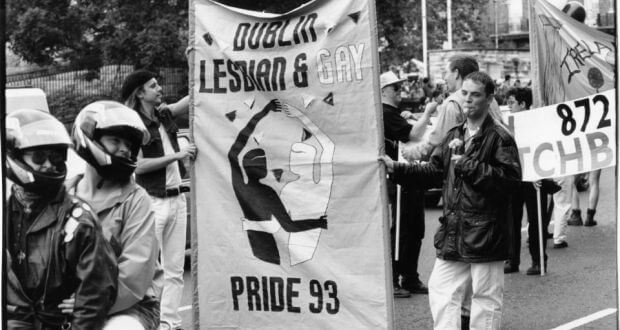 But what’s often lost in this conversation, Walsh explained, is that Irish people had long been supportive of the country’s LGBTQ population. The laws passed by the federal government at the time, however, did not reflect that acceptance.

“Change comes dripping slowly in this country, but people have been ready for a gay prime minister for several years,” Walsh said. “It’s like most societies. The population at large tend to be ahead of their political masters.”

When Ireland first allowed legal recognition for same-sex couples in 2011 with the passage of civil partnership laws, but a poll conducted the same year showed overwhelming support for full marriage equality. Seventy-three percent of respondents told Sunday Times/Red C that gay and lesbian couples should be allowed to marry, while 53 percent were strongly in favor of the idea.

When equality finally went on the ballot in 2015, it passed with a 62 percent majority.

And befitting this recent wave of progress, Varadkar’s win was a similar blowout: He won with 60 percent of the vote.

In Ireland, prime ministers are elected not by the public, but by members of the majority party in the legislature. Varadkar, a member of the center-right Fine Gael, lost the vote among rank and file members. He was heavily favored, though, by party leadership to succeed former Prime Minister Enda Kenny, who announced his retirement earlier this year. Those upper members make up 65 percent of the final tally.

Norris, put through the political ringer just six years ago, was touched by Varadkar’s landslide victory.

“In my generation, we didn’t know there were any other gay people,” Norris said. “That is a universal phenomenon of people of my age group. There were absolutely no role models whatsoever. To have a young, handsome politician who is widely respected by all parties, that’s a great thing. It says to a young person, ‘Yes, you can have a career in politics if you want. You can be successful. You can even be prime minister.’”

After the June 2 vote, Varadkar, however, had a few hurdles to clear before officially being named PM.

Following election from within the party, the Prime Minister’s win must withstand a vote of the full parliament, one scheduled to take place next week. This ratification process is usually a During a Wednesday vote, Varadkar won by a margin of 57 votes to 50 — and with 47 members of parliament abstaining from the vote. He was swiftly sworn at a confirmation ceremony in Dáil, the lower house of the Irish legislature located in Dublin.

In addition to becoming Ireland’s first openly gay PM, Varadkar will also be the youngest. He’s 38, making him also the most junior leader in European Union. France’s Emmanuel Macron is 39.

As much as Varadkar’s victory is a sign that Ireland’s LGBTQ community has broken the political glass ceiling, it was a smaller moment that reminded Norris just how far the country had come. Days before the election, he witnessed a gay couple strolling across O’Connell Bridge, a popular tourist spot in Dublin’s city center, arm in arm. Norris said that he often spent so much time fighting for equality that he didn’t get to enjoy the benefits for himself.

But three decades after gay men were kicked out of public spaces for doing nothing more than holding hands, the fruits of his labor was solace enough.