My Dad and I are in the colorful Victoria Harbor paddling our arms off so that we’re not in the landing zone of a descending seaplane.

For such a quaint provincial capital city, Victoria’s harbor is one of incredible action.

Besides the buzzing planes (many of which  are a part of Harbour Air’s fleet, the largest seaplane operator in the world) there are massive ferries that blow their blaring horns for all of the city to hear as they pull in at the end of the day and drop off locals, hoards of tourists and their cars and then again as they depart for the mainland the next morning.

There are also smaller watercraft, like sailboats and motorboats and then there are the paddlers: kayakers, canoeists, rowers, and dragon boaters, all sharing the same multi-use harbor.

The guide of our intimate three-hour-long kayak tour with Ocean River Sports and Adventures tells my Dad and me that the harbor is so busy, that it’s patrolled by a harbor guard who ensures the safety of all boaters, planes, and paddlers. We see him later on our tour, he is in a black boat, wrap-around sunglasses, and means business as he goes after a negligent sailboat full of rosé drinkers in the landing zone.

After we cross the harbor and the tipsy sailboat is diverted, the seaplane plunks its pontoons into the water with rugged grace, quickly coming to a complete stop before taxi-ing off the floating Victoria terminal. Kayaking the waterways and harbor, especially in the regions’ high season, is an exciting place to begin our exploration of British Columbia’s capital city, Victoria. 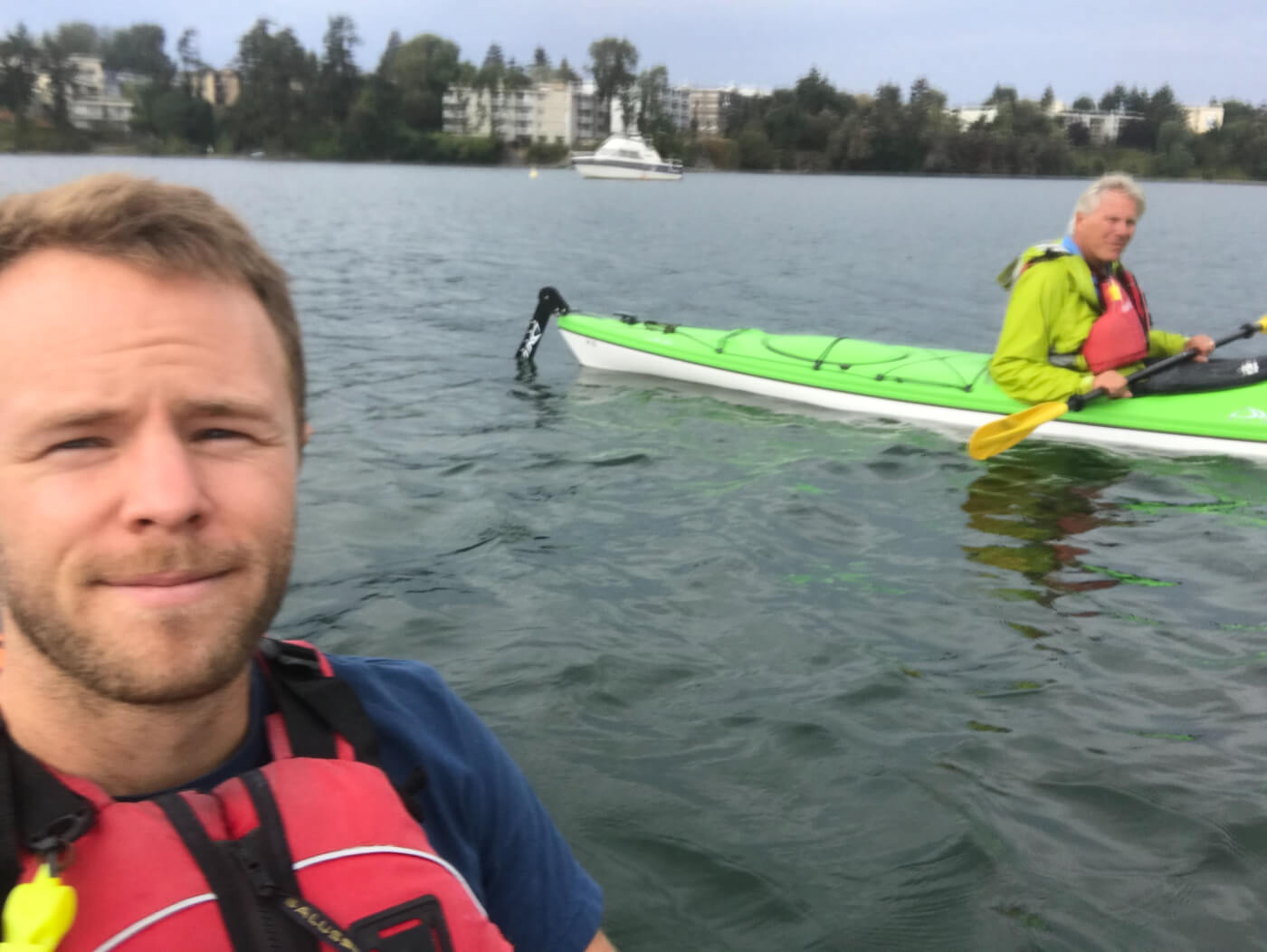 Located on the southern tip of the epic Vancouver Island, Victoria is the biggest city on the island, and second biggest in the province, but most noteworthy, it is one of the oldest cities in the Pacific Northwest. Victoria was established in 1843 as a trading post of the Hudson Bay Company, though, the region had been home to first nations people, the Coastal Salish and Songhee, for thousands of years before Spanish and British arrival.

Since its founding in the 19th century, the “Garden City” capital has become a booming tourist destination, cashing in over 3 billion per year.

It is felt on the town’s promenade. There are the summer tourist staples: ice cream and fresh lemonade stands, shops with swag with pictures of seaplanes, orcas, and the city’s famous parliament building. Grand and bright flower arrangements decorate the sidewalks and entryways of the city’s most significant buildings.

During my Dad and my’s British Columbia trip that included a weekend in Vancouver and a road trip that transversed the island to an extended stay in the seaside town of Tofino, I knew that as a travel writer I wanted to check out Victoria to see what all the hullabaloo was about. I mean, 3 billion dollars in tourism for a city of 350,000 is substantial!

I knew there had to be more to the city than the classic tourist stops I’d read about. While I loved the aesthetics of the gardens, tea houses, and grandiose hotels like the famous Fairmont Empress, and the horse-drawn carriages, these main tourist draws didn’t excite me — but I knew there must be more to the city and region, this was Vancouver Island after all, an outdoor enthusiast’s mecca, not just a town “for little old British ladies” as one harsh Vancouverite I spoke with wrote it off before I visited.

My Dad and I arrived in Victoria after a short puddle jumping flight from Vancouver before renting a car, and driving the surprisingly bustling streets and checking into our hotel, The Inn at Laurel Point, located right on the harbor.

What I loved about the hotel and much of Victoria, is the ode to beautification, whether it be the tranquil Japanese inspired landscaping of the Inn, or the city’s nearby and famously over the top Butchart Gardens, so much of the city’s aesthetic is is ornamented in natural spectacle and it already rests in one of the most gorgeous pockets of the Pacific Northwest.

For this reason, as well as the region’s incredibly temperate climate of dry summers and wet, rarely freezing winters, the city has become a place for retirees seeking a life of ease without sacrificing excitement and culture. Victoria has been named one of the top 20 cities for quality of life, according to Numbeo.

I knew that by signing up for a kayak tour, we’d get to see the other, active and natural side of Victoria. 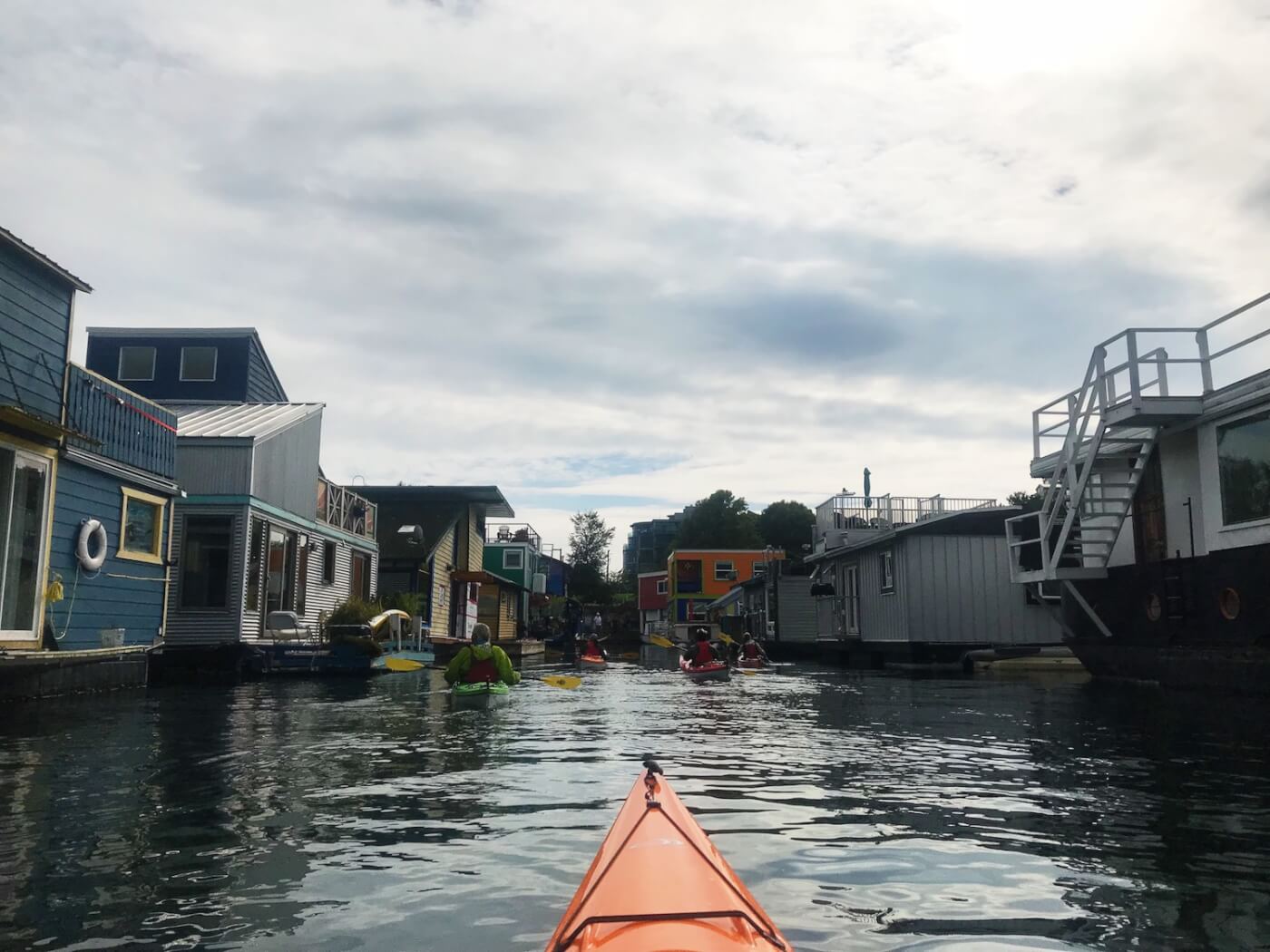 As we paddled deep into the Gorge Waterway from the main harbor, this became abundantly clear. Alongside the water, small private docks stretched like fingers into the water and led to beautiful apartment buildings, house boats, and homes that hid in the foliage of the red-barked Pacific madrones.

The homes, with canoes resting eagerly on their wood docks, resembled the classic Canadian summer cottage but were just a short drive from downtown and an even quicker boat ride. They proved that one could have it all- a permanent, year-round vacation home in near a city of significance.

Best of all, the further we paddled long kayaks with gentle easy strokes rotating side to side, the wilder the waterway became. Once polluted as a heavily industrial harbor, the inlet is now teaming with wildlife. Blue herons, endangered in the region, waded their thin legs in the shallows and seals sunbathed their blubbery bodies on smooth driftwood.

We paddled below bridges that spanned the inlet and by islands with golden grasses. One particularly memorable landmark was an old train bridge that had since been converted into a busy bike path as a part of the rails to trails initiative that stretches from Saanich to Victoria to Sooke, proving Victoria as a place of activity and motion.

Having grown up kayaking every summer in Canada on the lakes of Algonquin Provincial Park and later instructing kayaking at a camp myself, I was immediately in love with paddling the waterway and dreamt of a little home on the inlet. I mused of paddling into town to watch the city’s famous Symphony Splash in early August.

My father loved being on the water. I’m certainly and proudly his son. Although our thin sea kayaks were tight, I saw him smiling as the bright sun reflected off the surface of the water.  My dad has always been a man of the water. He began as a past waterfront instructor at a summer camp in New York, became an accomplished high school and collegiate rower, and just a few years ago, rafted the entire stretch of the Grand Canyon.

I grinned too, having him with me as we explored new territory together on cool northern waters. We were reunited on a father-son trip. 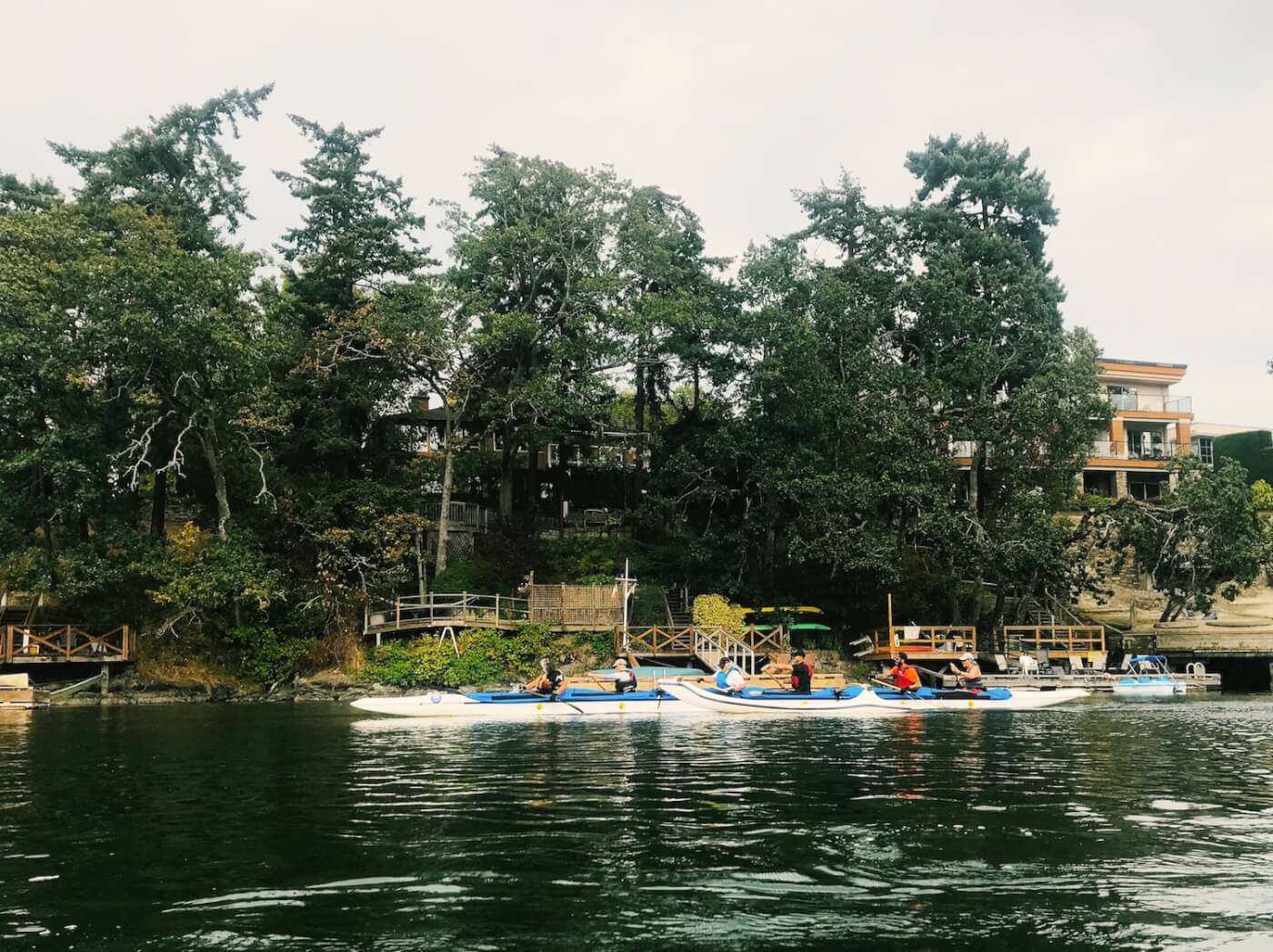 As the afternoon went on, we eventually turned around after having a snack of the season’s last wild blackberries that hung off the inlet’s shores.

Soon, we traced our strokes back to the harbor where we began our paddle. From a distance, we could still see that the harbor was busy as ever with seaplanes flying overhead to other adventurous locales, like Tofino and Whistler, with boats departing for afternoon whale watching tours all while many of the tourists of Victoria watched the spectacle from the promenade with ice cream cones and lemonades in hand.

Victoria’s robust tourism flourishes, I determined, because it is a place of hidden contrast. For some, it is a luxurious launching point for further exploration with adventure lurking in its own harbor, and for others, it is a place to come to relax, indulge, stroll, and take in the beauty of cool, pleasant days.