To look at the cover of the first twelve issues of Elska Magazine is to get a kaleidoscopic glimpse at queer men from around the globe.

A bespectacled young man in a tee with a loud floral print stares at us while blurred Welsh flags hang in the background. A tattooed guy in just his swim shorts is framed by windows that look out onto the Toronto skyline. A mustachioed man in just a white t-shirt, jeans, and a backwards cap stands in the middle of a busy cross street in Taipei. Each cover suggests the plurality inherent in the most utopian ideas of what a global queer community can look like.

Celebrating two years this month, Elska magazine is kind of travelogue for the Instagram age. It was founded and is run by Liam Campbell, whose previous job as a flight attendant is what first gave him the idea for what Elska has become.

“I had this idea to make a book,” he told INTO. “To travel somewhere, shoot a bunch of guys in the country and then write a book. You know, with some stories, but just a lot of pictures of the local people. Then, I thought, if I do a book that’s kind of like a one-time thing. But if I call it a magazine I could do lots of thema new one every couple of months.” 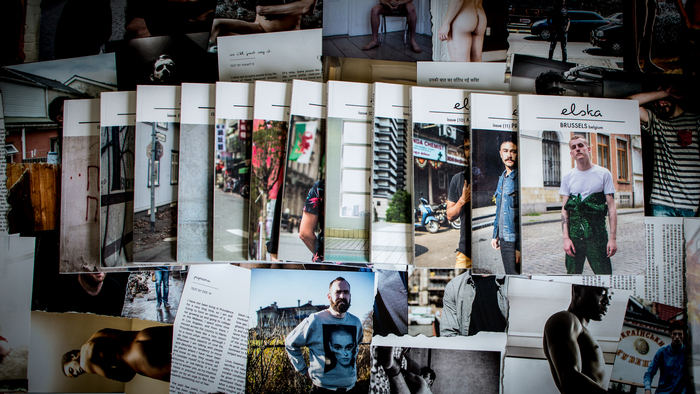 With twelve issues under his belt and with his magazine stocked in over 50 shops around the world, Campbell has found there’s a clear interest in these roving looks at men. Browsing through any issue of Elska, whether the one in Reykjavik, which Campbell loves, or the one in Providence, where he’s now based out of, is to get a glimpse of the “average men” that you are a click away on any given dating app; the ones you’d meet at a local coffee spot or find yourself catching late night at a gay bar.

And while some of the spreads skirt the line of propriety, suggesting and creating a vibrant queer intimacy, there’s no hard and fast rule about nudity or provocation. It all depends on the comfort level of those Campbell collaborates with. He recruits subjects and writers on the spot, often using social media to arrange photo shoots. He’s not looking for models. His motto is, “Anybody is welcome to take part. Whoever wants to.”
“You wear what you want. We shoot outside, inside, whatever you’d like. We can do nudity. But it’s up to you!” he tells the men who, as he recounts, have all too generously donated their time and bodies to Elska’s pages. 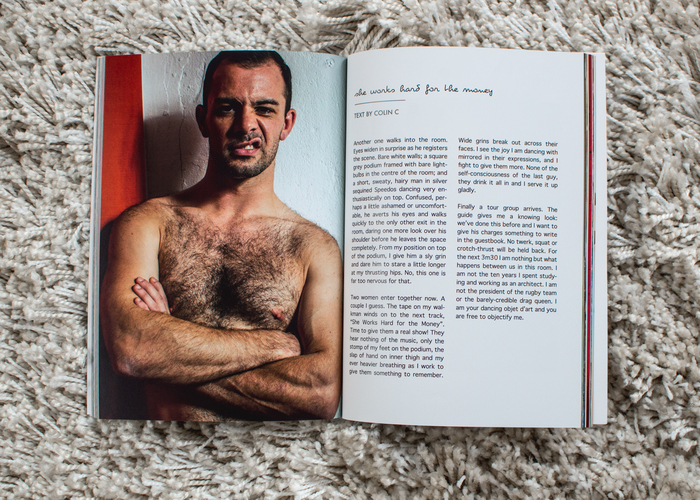 There’s a sense of discovery in the mag’s pages that mirrors Campbell’s own journey in making each issue. That’s due not just to the sensuous photo spreads that make up the glossy mag, but to the casual writings that litter its pages.

“Most of these guys aren’t experienced with writing,” he admits. But he’s found that their raw, near-unedited voices are what make each issue feel so authentic.

“Some are brilliant writers and have been super creative. And others are a little bit boring. But I do like this documentary aspect to it” even if he’s sure it might be “off-putting for a casual reader who picks it up off the shelf and happens to flip to an article that’s kind of dull. But once you understand what the concept is you just realize it’s about real people that you might meet and appreciate the honesty of it.”

Concerns about readership and, in turn, profitability don’t faze him. After all, if he wanted to chase after what sells, he’d be sticking a blond, white guy on the cover every chance he got.

“It’s just like on an Instagram page. If I have some white guy with his shirt off,” he told INTO, “it’s always gonna get like three times more likes than a chubby Indian guy. Always. It’s like science.”

He witnessed that firsthand when he published the first non-European issue of Elska set in Taipei. That run, he found out, became the lowest-selling one in Western countries and earned him plenty of tone-deaf responses.

“You know, I hope you don’t do this again. Because I’m just not into Asians,” one subscriber wrote. As disappointing as such interactions were, Campbell feels vindicated by the fact that Taipei eventually became the second best-selling issue worldwide.

Rather than shy away from embracing the full breadth of the queer global experience, Campbell has since also traveled to India (Mumbai), Japan (Yokohama), and hopes to shoot the first issue below the equator sometime soon. He wouldn’t mind heading down south to Buenos Aires or Sydney, but he’s most eager to travel to Africa. Not Capetown, which would be too obvious, but maybe Dakar, Senegal or Addis Ababa, Ethiopia. 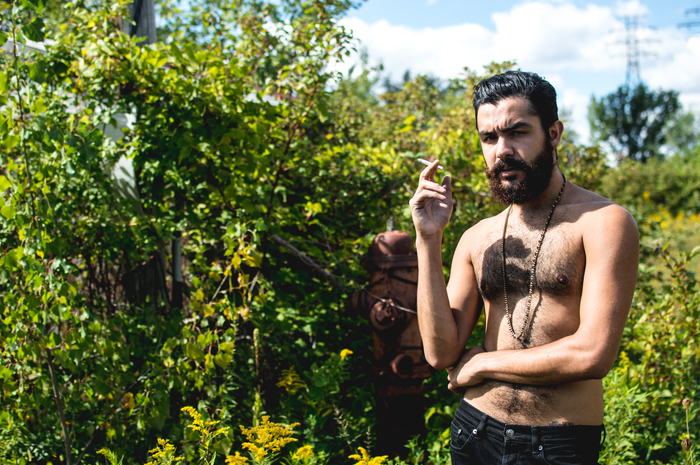 “I’ve tried to set issues there, but the people I talked to, there were some that wanted to do it, but others told me ‘I think this is dangerous. Not for me, but for others to be published in this type of publication,” he says. “And as much as I’d love to put a spotlight on an African gay community, it may not be ethically the best thing to do.”
In the meantime, Campbell is happy to be celebrating this two-year milestone and glad to take stock on how his pipe dream of an idea has since evolved into a globe-trotting project.

Looking back at the many men who opened their doors to him, and let him photograph them in their bedrooms, their bathrooms, out on the streets, in the nude or in their skivvies, he can’t help but beam with pride and remind himself what Elska is all about. It’s always been about shining a light on local communities for a global audience.

“I’m just trying to be honest about it. Show different places,” and if that happens to show readers what a diverse and inclusive gay media company can look like, so be it. As he puts it, “The people I meet are the people I meet.”