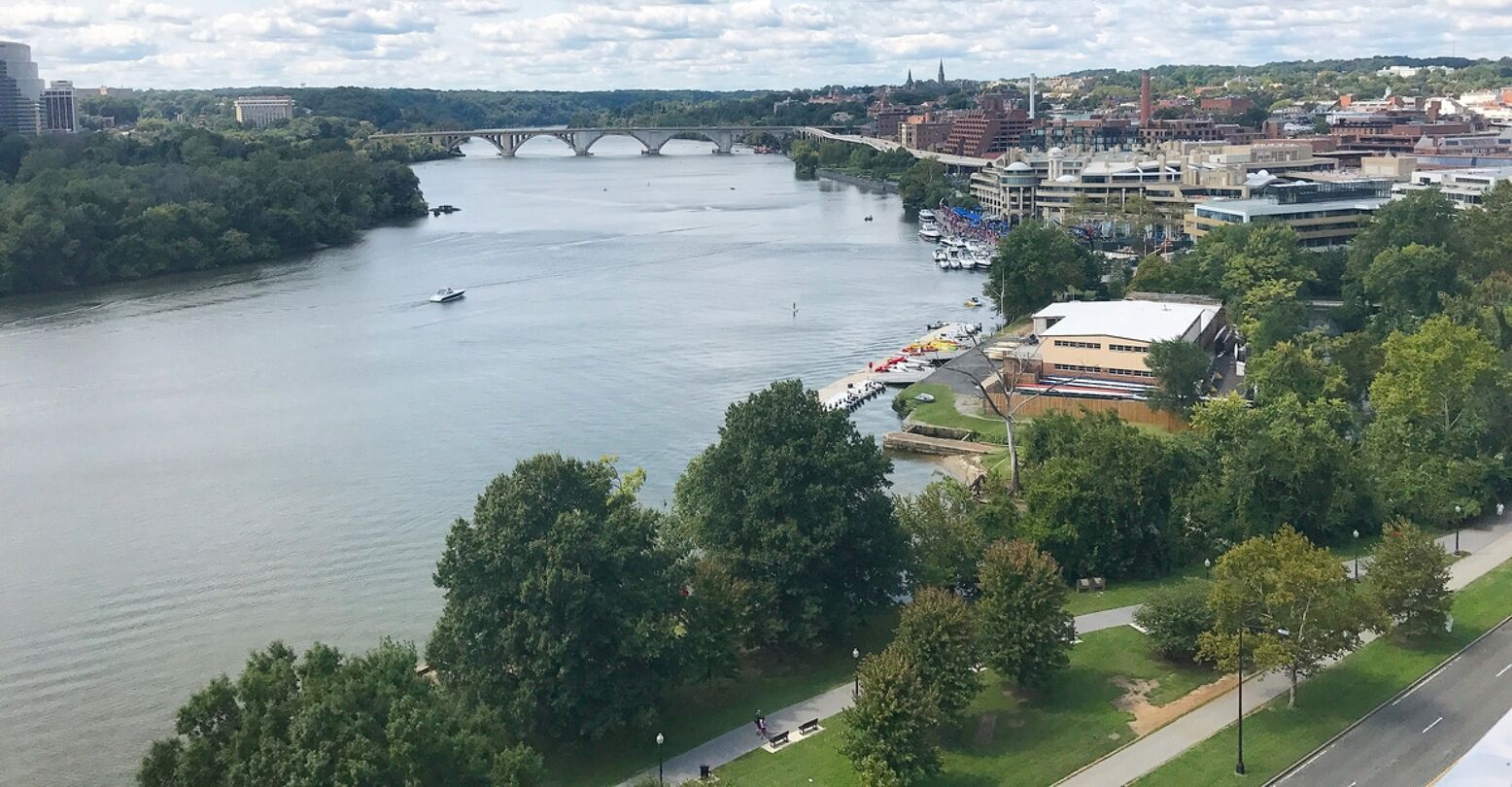 These days it seems like I wake up each morning with hopes that Robert Mueller has come closer to finishing up his investigation into the possible corruption, collusion, and overall shadiness of the president and his administrationbut after glancing at my news alerts, I typically bury my face in my pillow (and at times scream) because it seems like it’s never ending.

There’s been so much comparison to “Watergate” with what’s currently happening that one can only truly hope that whatever the outcome is in the end, we can finally move on from it and get our country back on the right path, whatever path that may be. 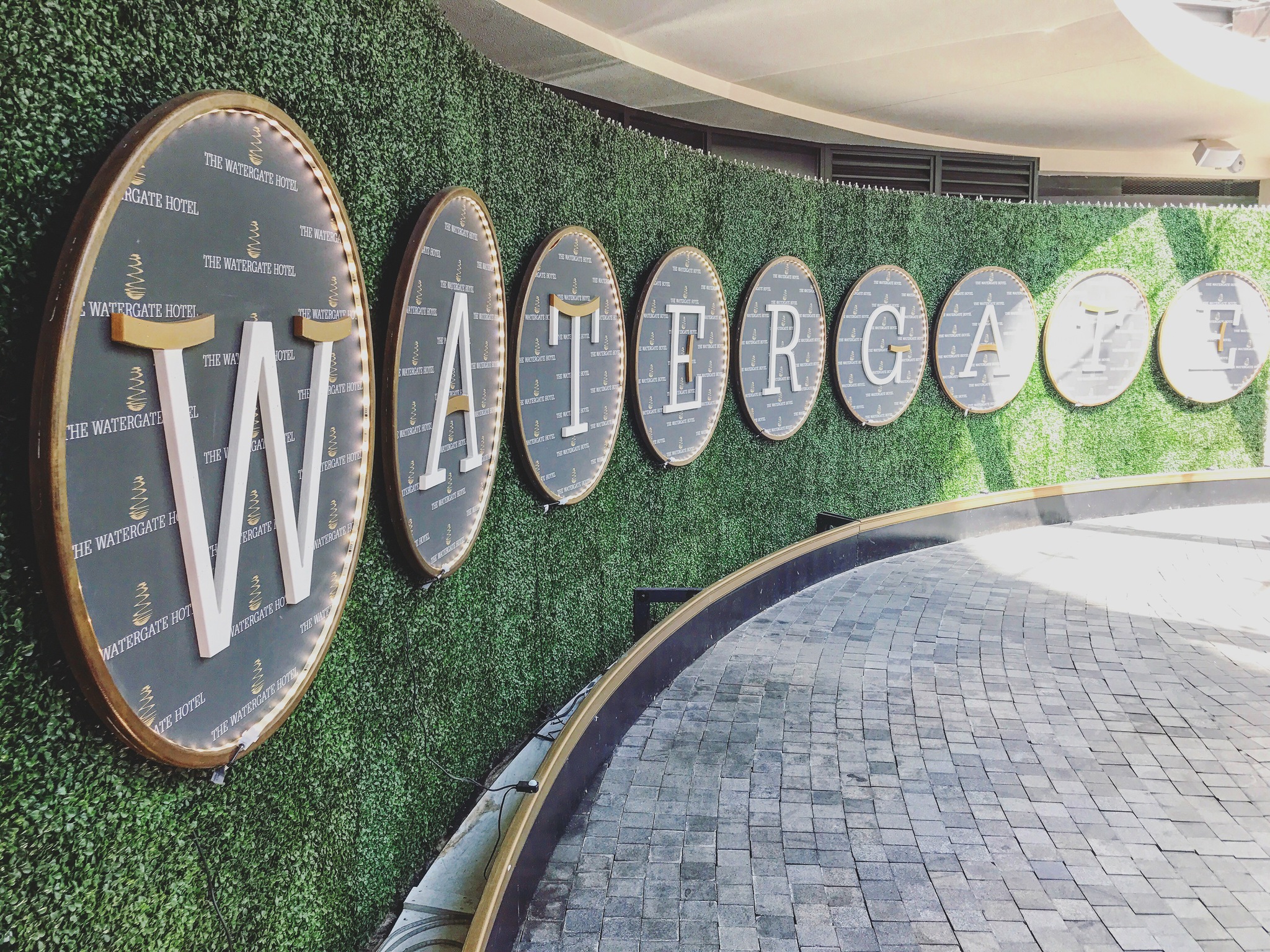 When I was booking a trip to Washington, D.C., I was checking out hotels and came acrossThe Watergate Hotel. At first, I questioned myself because I was pretty sure that the hotel was no longer operating under that name, or at all really, and it turned out that I was partially right.

The hotel had undergone several names and transitions since the 1972 scandal had taken place inside and within the Watergate Complex, but had just reopened a year ago after a new owner spent a fortune renovating the place and returning its original name to it.

A brief history lesson for those who may not be totally tuned into 1972 politics, fromHistory.com:

The Watergate scandal began early in the morning of June 17, 1972, when several burglars were arrested in the office of the Democratic National Committee, located in the Watergate complex of buildings in Washington, D.C. This was no ordinary robbery: The prowlers were connected to President Richard Nixon’s reelection campaign, and they had been caught wiretapping phones and stealing documents.

Nixon took aggressive steps to cover up the crime afterwards, and in August 1974, after his role in the conspiracy was revealed, Nixon resigned. The Watergate scandal changed American politics forever, leading many Americans to question their leaders and think more critically about the presidency.

From the outside, the hotel and surrounding buildings have not changed, they still have the same iconic look they always had, but once inside, it was hard not to go into stimulation overload. My suite wasn’t fully ready upon my arrival so I was escorted to the library, an elevated glass room overlooking the hotel’s signature restaurant and the lobby.

The furniture was retro mod with vibrant pops of color. Everything was very streamlined and strategically placed, making it impossible for me not to start taking pics and posting them. When it was time to head up to my suite, I wasn’t fully prepared for what I was about to experience upon stepping inside.

My one-bedroom suite had a separate sitting room with this magnificent brown leather couch – it was just so simple and pretty. The designer didn’t fill the space with furniture, but instead took the time to ensure that each of the limited pieces of furniture were all incredibly sexy stars of the show, making the room feel like an interactive museum, interactive because there was no way I wasn’t going to use and touch every piece in there. 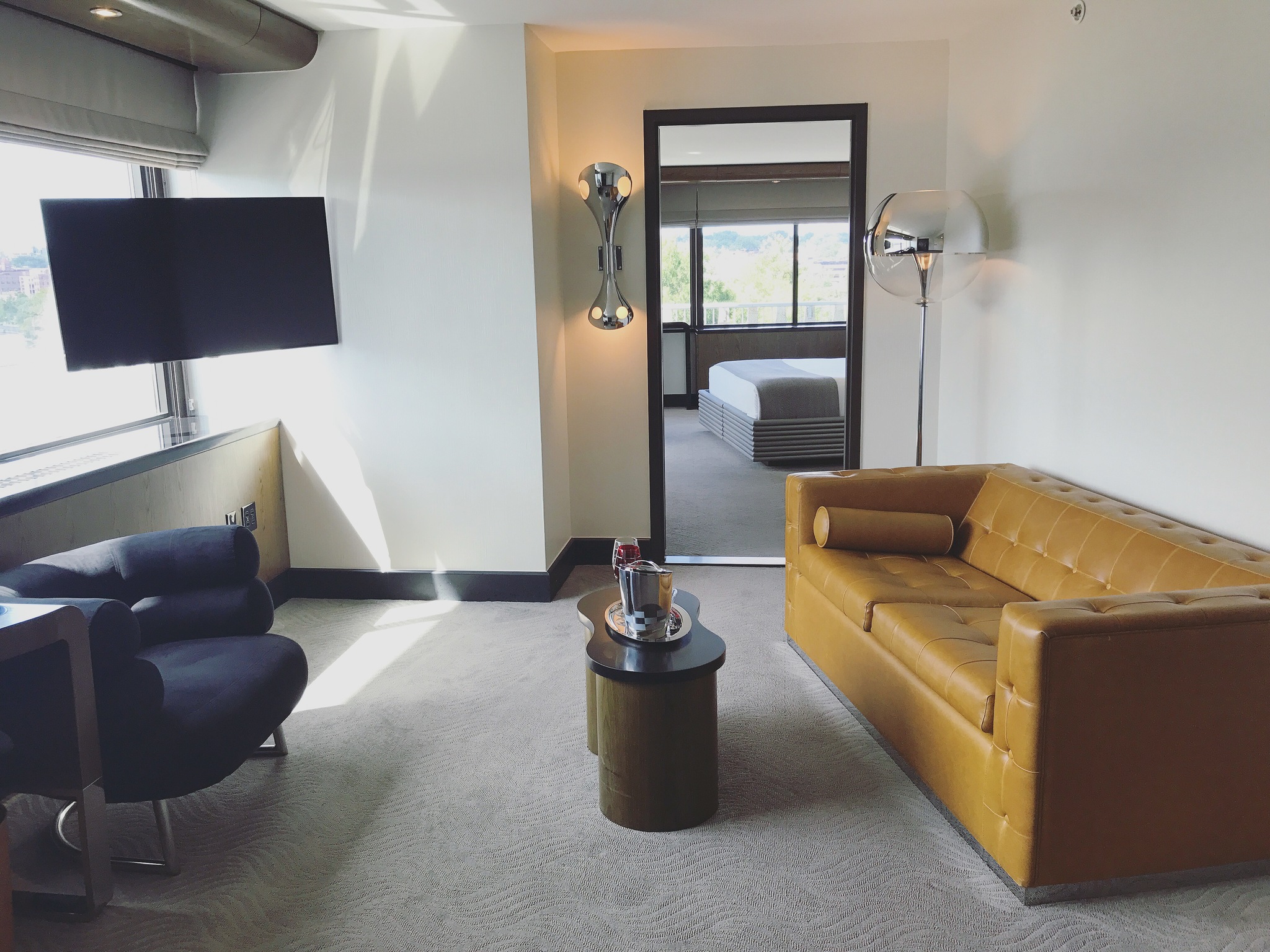 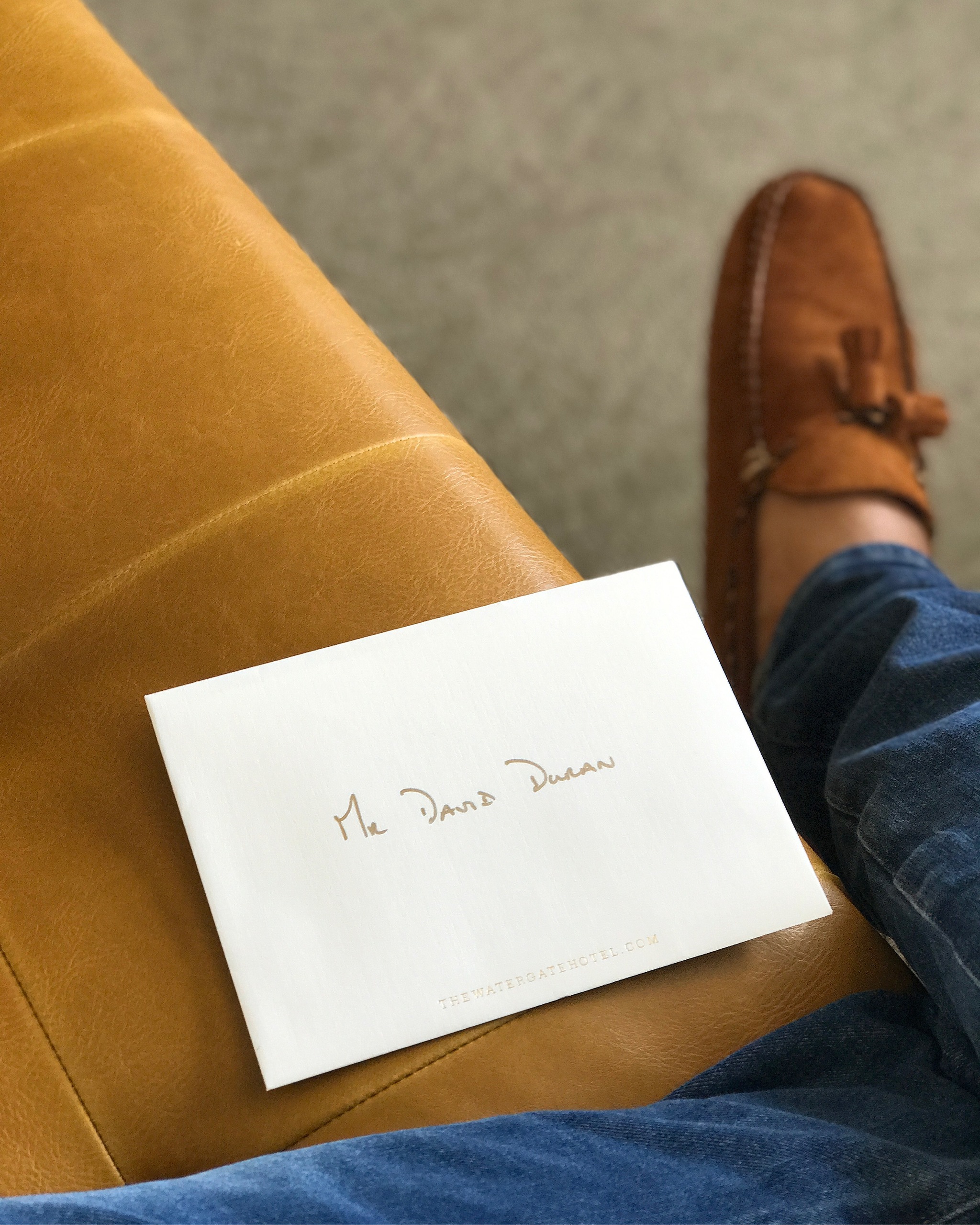 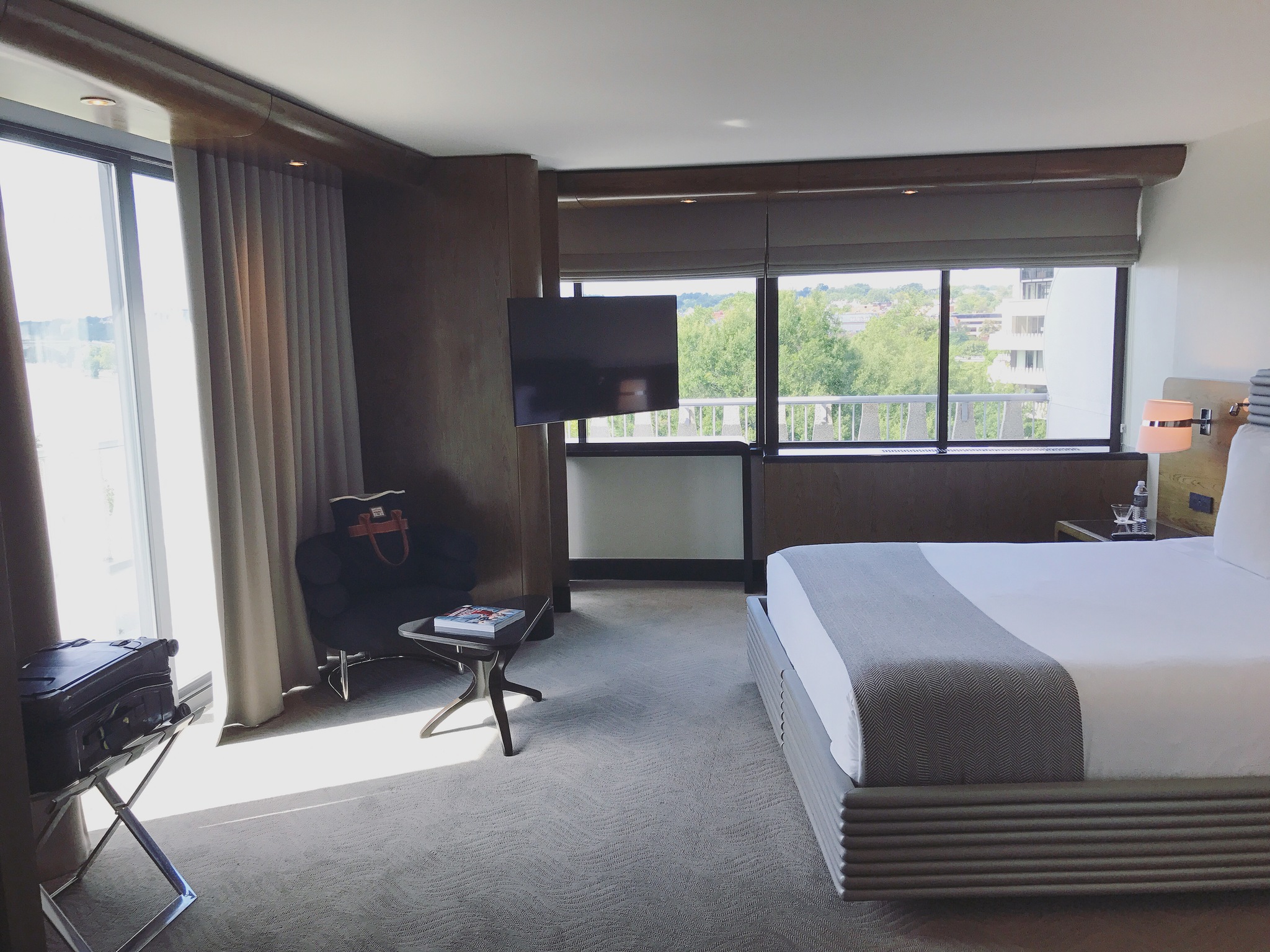 Through the doorway, the bedroom continued with the simplistic modern theme and the wraparound balcony with views of Georgetown to the right and the Mall to the left, with the Potomac River acting as the centerpiece.

The river area directly in view served as a helicopter highway, and the low-flying copters were seriously fun to see as they passed by every now and then. I was told that even the presidential helicopters along with military escorts would pass by, and I was hoping to see them, even though I wasn’t particularly interested in who would be inside.

The bathroom within the suite was beautiful and black and had one of my favorite hotel bathroom features of all time – a bath within an enclosed shower. There’s just something about being able to slip out of a bath, directly into a shower to rinse off. The hotel designer had really gone out of their way to not overlook any detail. I mean, there were even pencils that had “stolen from The Watergate Hotel,” written on them. One night, I swore I even heard mumblings of a conversation coming from my telephone, but that could have been the champagne talking

Speaking of drinks, the Top of the Gate, their exclusive rooftop bar was the place to be, and thankfully I managed to snag a last minute reservation (it might have helped that I was going to write about it, just saying). The place was packed by 8pm and the drinks were flowing all night. They serve some pretty awesome thin-crust pizza up there, and since it’s thin crust, it’s guilt free and totally healthyat least that’s what I tell myself. 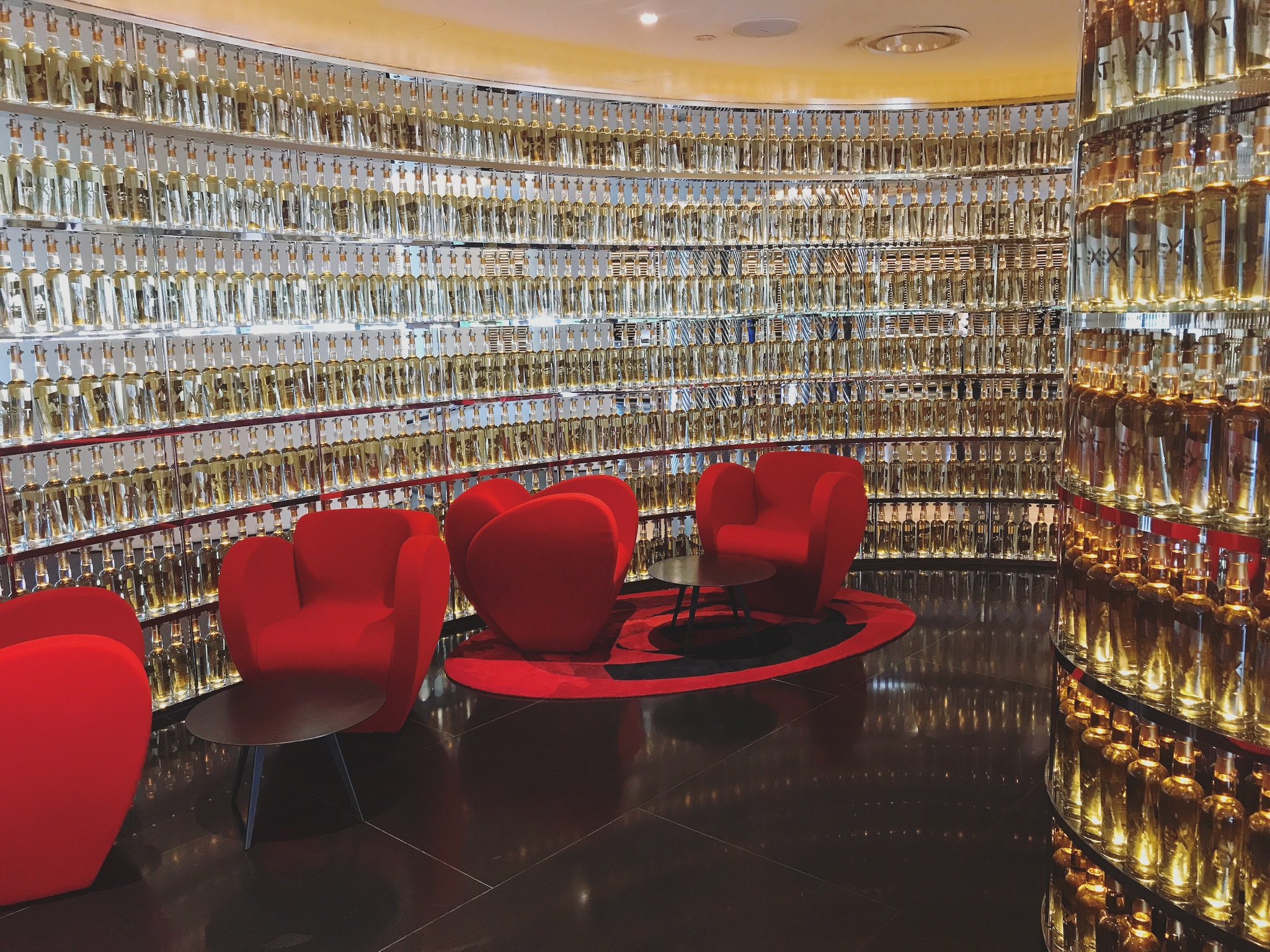 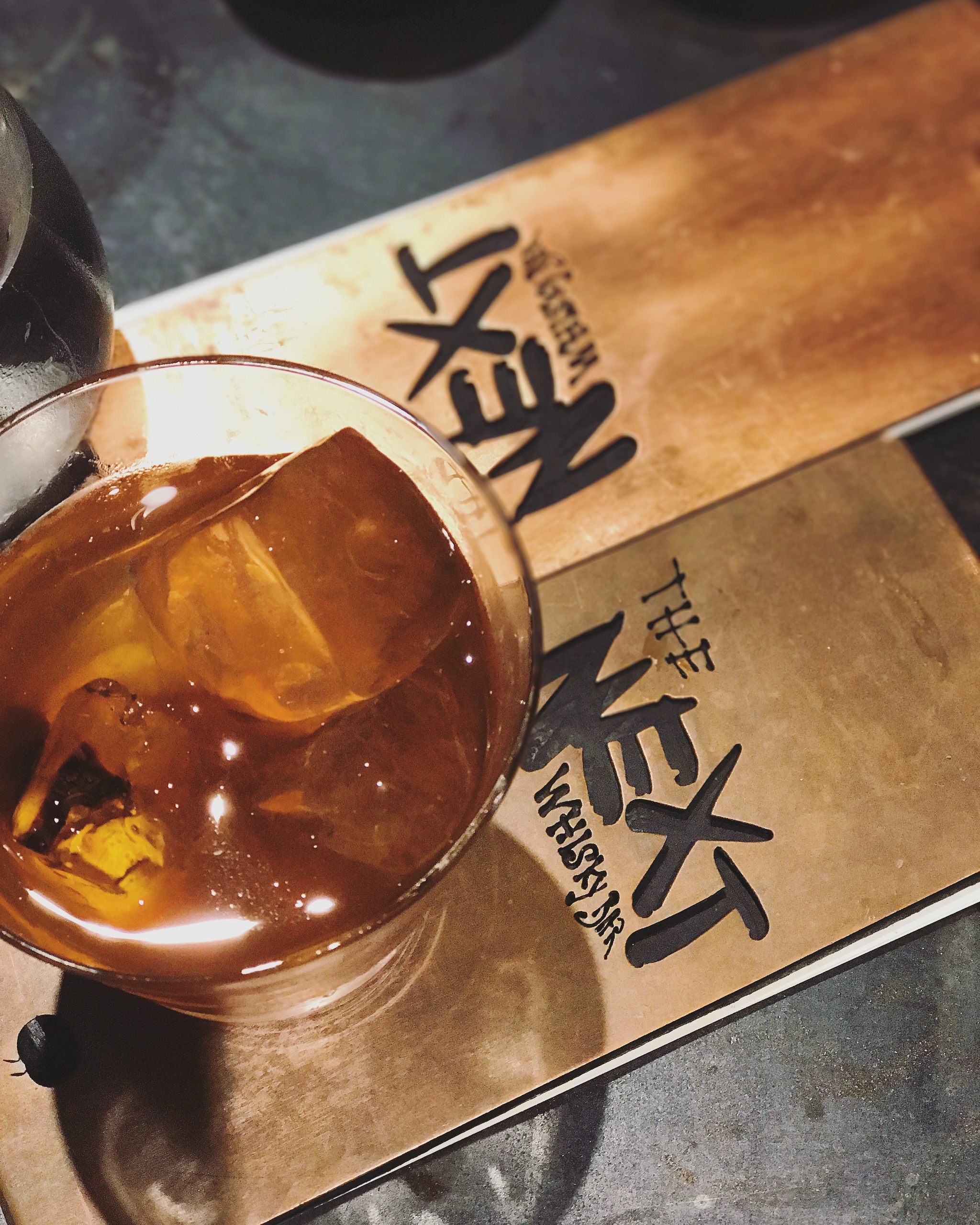 Downstairs, in the lobby, The Next Whisky Bar is the centerpiece upon walking into the hotel. Tucked away behind a wall of whisky, literally over 2,000 custom whisky bottles made just for the hotel, is this beautiful bar with the most complex whisky menu I’ve ever seen. Naturally, I had to taste as many rare whiskeys as possible during my stay – for research purposes, obviously.

And their signature restaurant, Kingbird, played host to my final hours at The Watergate, as I had Sunday brunch there. Keeping with the theme of the hotel, the menu was limited but was made up of all incredible options. Plus, the bottomless mimosas for $17 were a steal (Watergate reference, totally not on purpose) for an upscale brunch.

This beautifully modern hotel provided me an opportunity to take a step back in time with its nods to history and what took place there, without being so obvious about it. The clues were everywhere and finding them, and digging deeper, uncovered so many unique touches to the décor and atmosphere that are probably often overlooked.

It was nice to be able to step away from our current political climate (and scandals, depending on who you ask), and immerse myself within a part of our past that really changed the office of the presidency forever (except until now, because this current guy obviously hasn’t read a history book).