For three days last week during the government shutdown, Joshua Tree National Park was semi-closed. Or, semi-open, all depending on whether you’re more glass-half-full or empty kind kind of cat. Either way, it was more enter at your own risk and don’t expect much help or common commodities “open.”

During the shutdown, national parks across the country were largely unsupervised by rangers increasing potential for vandalism and accidents while basic services like garbage collection and restroom management were delayed until reopening. And to many visitors’ dismay, some visitor centers, like Joshua Tree’s, was closed from Saturday the 20th to Monday the 22nd, neglecting first time visitors educational information and suggested itineraries.

While this is not the first time a government shutdown has affected national parks (most recently in 2013 and in 1995-96) it was the first time I’ve had the opportunity to investigate what a closure and its aftermath look like in a park. 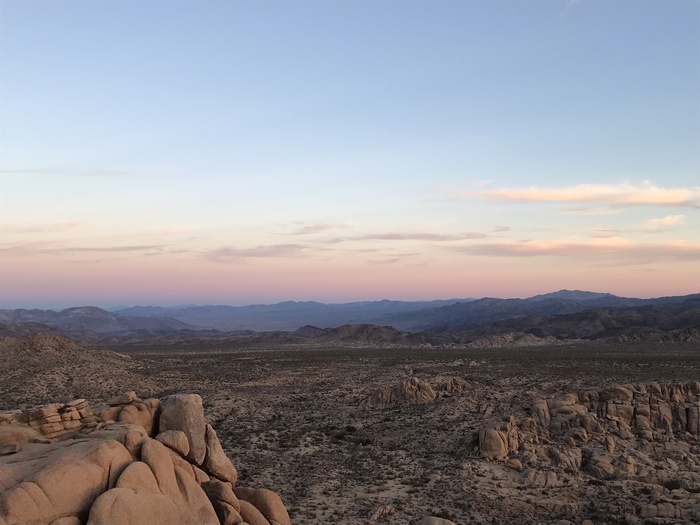 And so, I hurled across the Los Angeles basin with my cousin Haley, past the mighty San Jacinto and the Sand to Snow National Monument, before threading the passes of the Twentynine Palms highway to the West entrance of the park where, a day after “reopening”, park rangers handed us information but were unable to process credit cards for the $25 entrance fee. This would be the last time we came across a ranger until passing through the same gate on our way out, 24-hours later.

We rode the curves of Park Boulevard through the dribble-drop landscape of granite rock piles and joshua trees in search of a campsite (as they go quickly in Joshua Tree! Always arrive early.) The famous trees that speckle the park’s terrain were named by the first mormons settling in the region after for the biblical Joshua, who enthusiastically held his hands up to the sky for God.

The park of course borrows its name from the trees, which actually aren’t trees at all, but giant yuccas, scientifically yucca brevifolia. A nerdier readership may like to know that the yuccas are evergreen, arborescent monocots that bloom white flowers in panicles while more unassuming readers will find pleasure in the yucca’s whimsical and wild Dr. Seussical appearance as the shaggy plants twist, snarl, and gnarl from the gruss of the high Mojave. 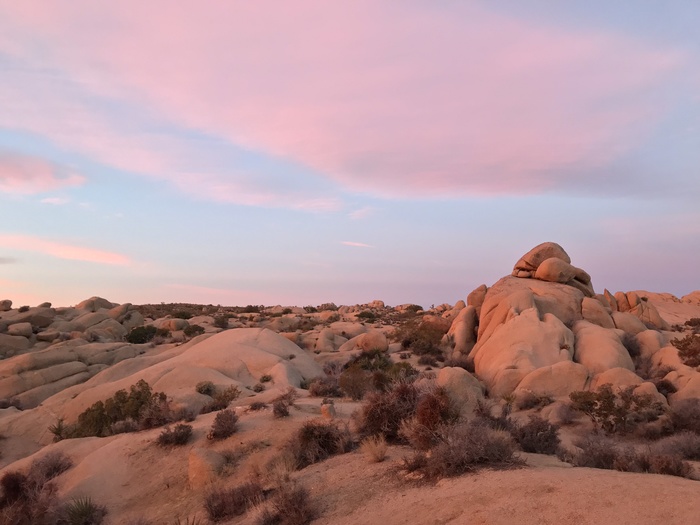 Miles in on our drive, the park showed us its enormous valley surrounded by bare and dry mountains. The massive expanse of joshua trees and carpets of brittle brush marry the feel of a Namibian savanna in the dry season with an unforgiving, martian terrain. But don’t be confused earthling, though the giant yuccas may wring like the acacias of Africa from afar, this region is classically desert.

And because it is desert, temperatures are mercurial. Summer days soar and winter nights dive, sometimes layering the higher altitudes of the Mojave (and all of its sand, cactus, yucca spears, and chuckwallas) in a thin sheet of snow.

But the park’s namesake “trees” are not the only reason to visit the famous park for there are rock piles that desert bighorn sheep scurry across and boulders that rock climbers send like spider people. There are wind battered 5,000+ foot rounded peaks that intermediate hikers summit allowing them to view the eternal smooch of two great desertsthe Mojave and the lower lying Coloradoconverging in a split-lipped canoodle as they brush their scruffy cholla faces against one another. 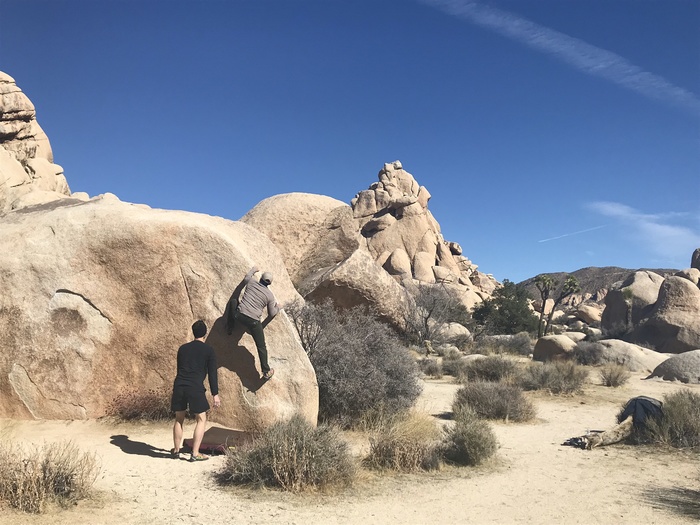 But most indelible are the colors the two deserts’ unity paints come nightfall and daybreak: cantaloupe, atomic tangerine, blood orange, rose flush, Tiffany box blue, followed by a most mellow periwinkle. And then of course, the quick absence of those colors when darkness gives visitors of the park a nightlong performance of constellations, milky ways, comets, planets, moons, and shooting stars.

After having little luck looking for a campsite in the notoriously full Hidden Valley Campground, my cousin and I set up our tent at the nearly full Jumbo Rock Campground at a site that had the clearest view of the sky i.e. completely unobstructed by rocks (jumbo or otherwise) for the upcoming celestial performance. With a clear forecast ahead, we omitted our tent fly so we could doze off as we gazed.

But with darkness hours away, we went for a hike to boulder hop for a sunset vista. Up we went, scurried like the desert sheep up the largest dribble drop castle of granite to an unnamed flat top with views of snow capped Old Greyback and San Jacinto, the San Bernadinos, the Hexies, and the cute little Pintos. Far, far off in the periwinkles of the sunset were the beginnings of the elusive, sand-duned, and wondrous Mojave Trails National Monument. 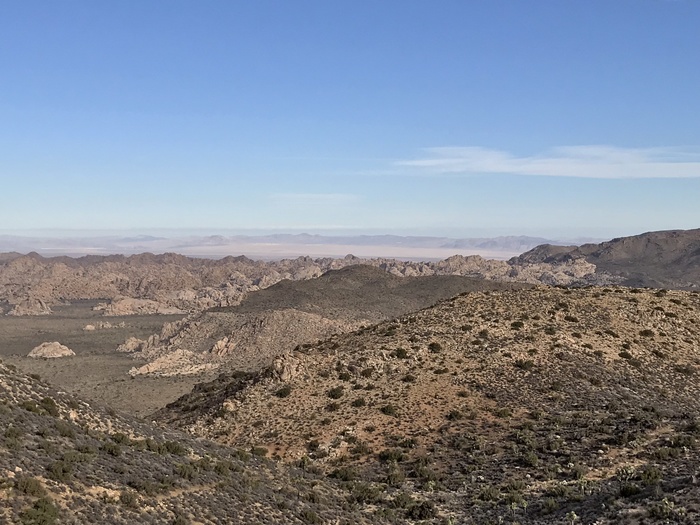 Yes, from up high, the park before us, the sun setting, we had forgotten about the park’s closure days before. The landscape remained the same, it was only on the trails, roads, campsites, and entrances’ that the park felt slightly delayed by productivity. For instance, after scrambling our way down to our campsite in the last slithers of daylight, we came to our campsite to notice our $15 dollar campsite payment had still yet to be collected by rangers (and wouldn’t be all evening or morning when we set off for another hike.) After talking with a ranger on our way out the next day, we learned that during the shut downwith no park rangers managing the gateway admission was completely free, as well as camping.

Park rangers were not able to give an official statistic of lost fees during the three days of the shutdown, but it seems the park lost thousands of important dollars due to government incompetence. And remember, this is just one national park.

This is a revelation from an administration that plans to hike prices to popular national parks (like Joshua Tree) to $70, a move that has been largely criticized for excluding lower socio-economic classes who already make up a small percentage of visitors as is.

But, enough about the administration and Interior Department’s incapability of managing, appreciating, and guarding our wonderful interiors, and more about the stars on that clear, chilly desert evening that smelled like spiny hopsage and freckled milkvetch. 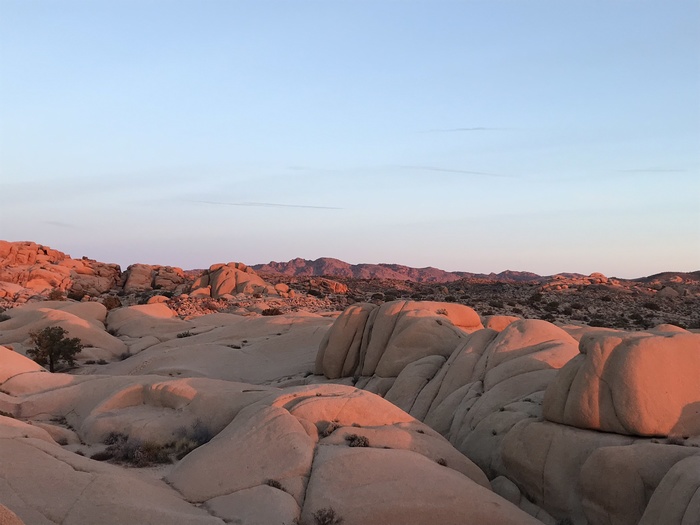 After cooking dinner with our bright headlamps, we retreated to our tent where our orange, fluffy sleeping bags waited patiently to warm us as the temperature continued to drop to freezing. Stretching above us, the northern hemisphere constellations of winter, unobstructed by city lights.

There was Orion, the hunter looking as ruggedly handsome as ever. Sporting his overworn belt and above him, Cassiopeia everyone’s favorite seated queen who won’t stand to kiss the hand of royalty and glares demeaningly at vain Leo mane from a distance. And nearby, Ursa Major, the great bear, strong and thick and fierce- scoured the night sky for berries and Pisces.

What would stargazing be without shooting ones? Charmed, we were as a few blinked across the sky in our hour of watching and talking as we neared serious sleeping bag snugs. Together, we counted a handful. What we wished for of course was competent leadership, but also, to forever recollect the hues of that aforementioned dusk: periwinkle and rose blush becoming the twinkle of desert hush. 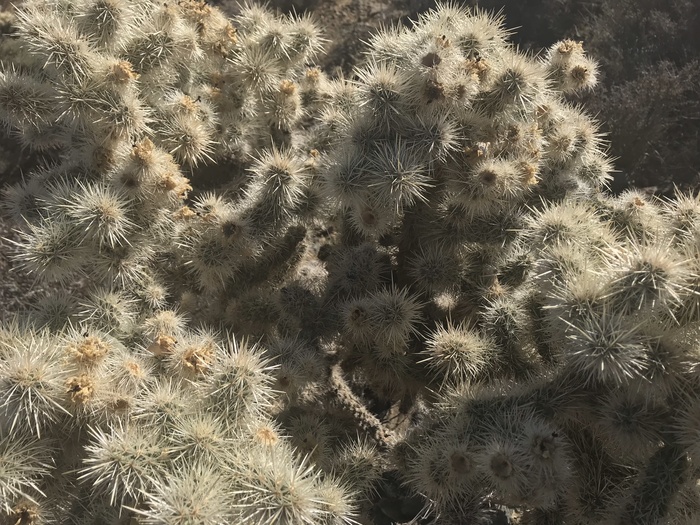 With growing worry of automobile traffic and population influx, socialite, desert plant lover, activist, and comprehensive bad-ass Minerva Hoyt convinced President Franklin D. Roosevelt to declare 825,000 acres of southern California desertland a national monument. The monument was promoted to Joshua Tree National Park status in 1994 under the Desert Protections Act. The park’s greatest threats include a growing number of visitors (doubling to three million per year since 2014), climate change, and off-roading/vandalism. When visiting, use leave no trace principles, bring plenty of water, and be prepared to peacefully share the park with many other visitors.