There is a time of day on the slopes just after a pocket lunch of PB and granola bars where a spring sun begins to soften the snowpack of a longstanding winter. The result is butter soft as skiers and boarders carve into the forgiving suppleness of a typical hardpack formed by cold February. The phenomena happens at many western ski resorts on warm vernal days but was most sublime this past week at Idaho’s appropriately named Sun Valley, America’s first destination ski resort, which glows in over 280 days of sunshine a year.

I was lucky enough to ski the legendary Bald Mountain, affectionately known to locals and die hards as “Baldy,” on one of these particularly bluebird days as I lounged about on my telemark skisa chilly morning of cardboard corduroy unhurriedly became a friendly and forgiving mass of soft serve as the degrees soared, causing goofball skiers to shed layers one by one until late afternoon a wild posse of bare-chested and sports-bra-ed hooligans straight lined by me emitting yeehaws of guttural stoke.

Their lower bodies decorated in bright, vintage ski garb: neon pink, lime, electric blue, and pineapple yellow. Their equally rad coats were tied around their waists and the interiors of their backpacks clinked with fallen soldiers of freshly shotgunned Coors Light. 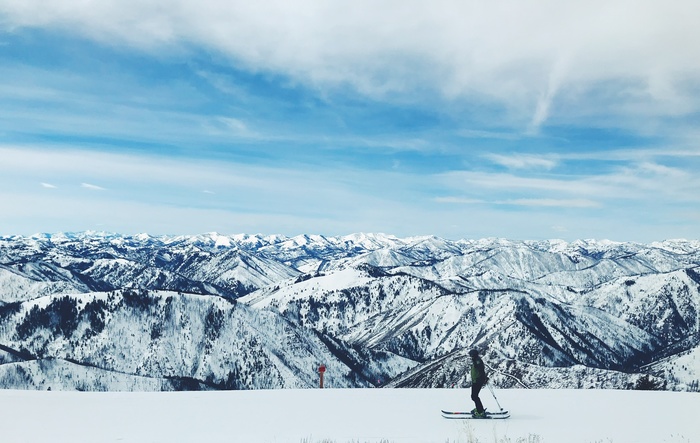 They skied switch and hit lips for tight 180s and sloppy 360s landing on the coarse corn snow, the most favorable of spring skiing conditionsthe kind of snow that melts by the afternoon only to refreeze at night. There is enough give in the loose conditions to catch even the sloppiest of jumpers and slow down the most out-of-control speedster if they allow themselves the swift submission of their edge.

The only thing missing from this raucous group of spring breakers was a ski movie soundtrack of rock’n’roll- realizing it or not, these skiers were the subjects of their very own modern ski flick in the tradition of the great and late Warren Miller who passed away this January at 93.

And whether or not you know it, you’ve seen a Warren Miller film in some snipped capacity. Whether it was reeling at a bar during your family’s trip to Colorado, playing on the screen of an outdoor sports store, or secretly being consumed on the computer screen of that beanie wearing (and possibly doobie smoking) kid in your high school math class. Miller’s prolific 500 outdoor films are of true extreme sports documentation legend. And even if you haven’t seen any of the films, you’ve seen their influence zip into any outdoor adventure flicks or amateur GoPro edited loosely on iMovie. 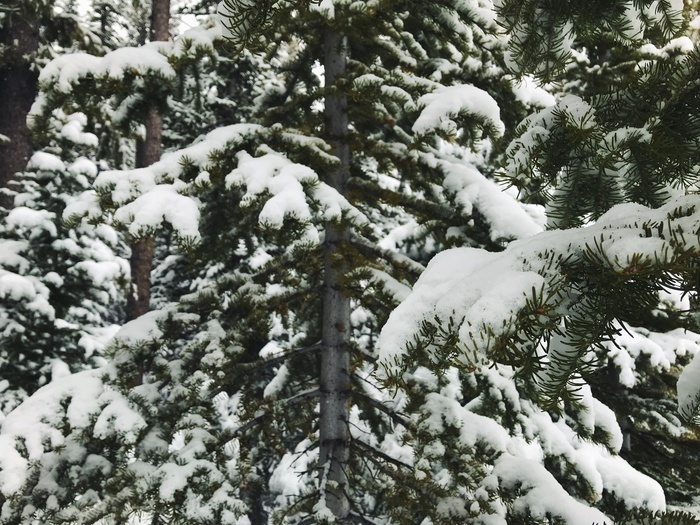 Each of Miller’s films were a combination of daredevil big mountain skiing, fun ski resort tricks, experimental techniques (like the infamous headstand skier), and of course, the absolute tomfoolery of risk takers in kayaks launching down steep snowy couloirs, skiing underneath live horses, and a man lighting himself on fire for a run in Beyond the Edge. Every movie was, of course, followed by blooper reels of wipeouts, wipeouts, and WIPEOUTS.

The stupid stunts in many of the films predate the late 90’s Jackass shenanigans by decades, and were at times, just as idiotic and goofy (though, much less crass) but underneath it all was an underlying presentation of fun, laid-back lifestyles, joy, and an air that said “we’re lucky any of this is even happening” as well as, “I’m still gonna flippin’ send it!”

My favorite Warren Miller flick has to be 1980’s Ski People which shuttles around North American ski resorts (including Idaho) and has these outrageous, superfluous scenes of smiley skiers in matching onesies swishing back and forth in free flow choreography that must be some of the campiest scenes in any ski film. The colors, costumes, spread eagles, and flamboyant hip sways are out of this world wonderful. 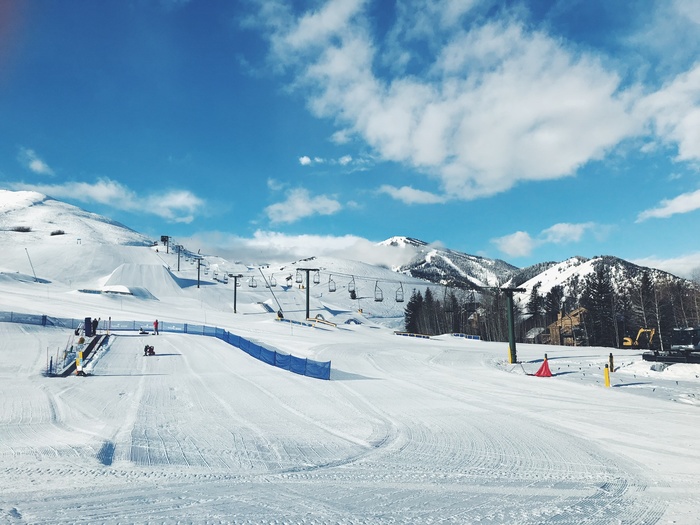 The amount of genuine self-expression and gratuitous flaunt emitted through the skiing in the film gives even today’s best drag queens a true run for their money in entertainment and performance.There is emotion, personality, steeze, and a hell of a lot of sass, and it is all appreciated and welcomed in comparison to the serious, serious, SERIOUS Winter Olympics we’ve just sledded through. Ski People is zeal, showgirl performance, and flurries of kitsch.

Thirteen years later in the concluding narration to 1993’s Black Diamond Rush, Miller muses on this self-expression and exploratory identity“It doesn’t matter if you’re in Valdez, Alaska skiing out of a helicopter or putzing around on a hill in Iowa, the adrenaline rush comes when you satisfy your most basic instinct, your own search for freedom…So get with the program and go out and explore places you might not have before. Go out and explore the outer reaches of your mind and body”

Through my research on Miller, I couldn’t find documentation of the snow sports icon’s stance on queer rights, but his widespread message of freedom seems only to hint at acceptance, anything else would be contradictory to his passionate portrayals of self-expression. 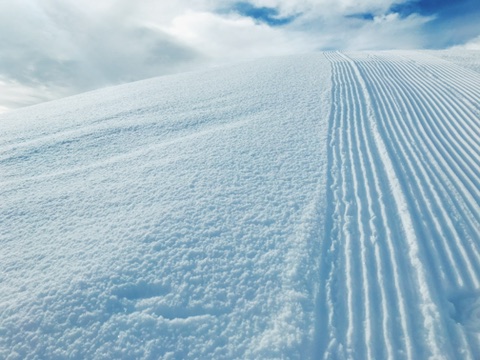 His greater message was one of an intense zeal for life which was celebrated during my stay in the form of block party in the man’s honor, a part of the the 2018 Sun Valley Film Festival, where partygoers caroused in the streets of Ketchum in their brightest vintage ski gear, bumped and grinded like hooligans on stage, and warmed their hands by gas-lit fires as a blizzard brewed far awayclassic scenes from Miller flicks splashed behind a DJ playing progressive house and trap.

Miller’s lively and prolific film career began in the little resort town of Sun Valley in south central Idaho in the 1940’s after he arrived in the town in his early twenties, where he began living the classic ski bum lifestyle, where there are reports of him renting out an unheated garage (later a teardrop trailer) for cheap rent and ski instructing to allow him limitless days on the mountain where he began making his documentaries, in turn elevating the already popular Sun Valley to international status as skiing picked up across the country.

You see, Sun Valley was the site of the first ski liftin the entire world. It was the littlest BIG thing in the world of snow sports at the time, just over on Rudd Hill (it’s still there, but not operating.) Quickly the small resort town became the prime ski destination for Americans who had experienced the greatness of Europe’s lofty Alps and craved for more snow-covered runs on their own home peaks.

And so, with brilliant public relations led by Averell Harriman who invited Hollywood in droves; a fur-clad Marilyn Monroe, Lucille Ball in snow bunny realness, the handsome Westerner himself, Gary Cooper, the mustached and slickly-combed Clark Gable, many other actors, and, of course, Ernest Hemingway, who wrote For Whom the Bell Tolls in suite 228 of the now newly renovated Sun Valley Lodge. 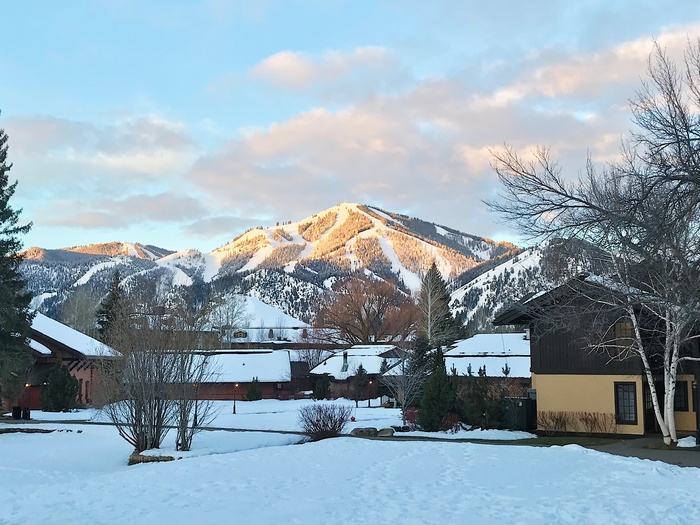 This starlit genesis, influence, and general proximity to large West Coast cities like Los Angeles, San Francisco, and Seattle (as well as an efficient bus service) set up the resort with an open-minded flair as a pocket in the middle of ranchlands and conservative ideology that celebrated performance, the arts, and a little bit of glamour. Still to this day, the warmth and open-mindedness persevere, welcoming more celebrities, but much quieter (and less fur-clad) ones than Aspen or Vail.

All of this, coupled with the extreme, grateful, and enthusiastic culture of Warren Miller’s legend established this little sliver of Idaho as an open-minded Shangri-La even though the valley of 21,000 residents has a comparably tinsy queer population.

But if drag queens are the markers of innovation, the town may be on its way to queerer days with the Limelight Hotel’s first Drag Queen Extravaganza this past November hosted by Boise-based drag queen troupe Charley’s Angels. The town may not be the place to move to find your same-sex lover but it is the perfect escape for queer couples ready to be welcomed with open arms, wild vistas, and radical Warren Miller-esque self-expression, like the troop of shirtless skiers ripping by me. Hopefully, in years to come, ski towns like Sun Valley will draw larger populations of year-round queer residents who will shuck off their ski boots, drop their skis, and call Idaho, Idahome. 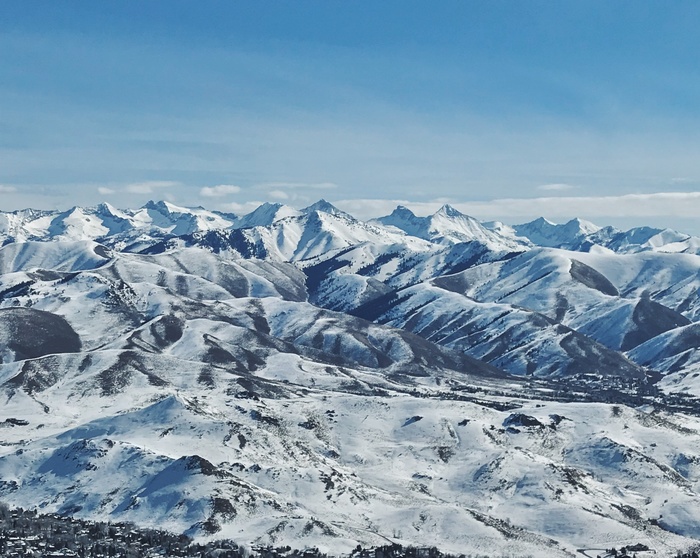