As my friend Lee and I suntanned in the buff on rust-red sandstone, we heard voices coming through the ghost gums. We had hiked a few kilometers through the hottest hours of the day to a little swimming hole in the heart of the Outback during a three-week road trip across Australia’s remote Northern Territory. After seeing the cool waters of the gorge, we underestimated our solitude, shucked our clothes, jackknifed, and horsed around before slipping onto the sunbaked rocks on the far shore to snooze and warm ourselves like lizards.

The gorgeous plunge was tucked between some of the tallest mountains of central Australia’s MacDonnell Rangesan unexpected four hundred mile chain of desert peaks that erupt from the Outback’s flat expanse to five thousand foot quartzite summits. Through terrific faulting and erosion, cracks and crevasses gave life to permanent water sources significant to the Arrernte people for thousands of years. While some of these gorges remain sacred places and prohibit dips and visits, many, like the one Lee and I snoozed by, allow swimming. 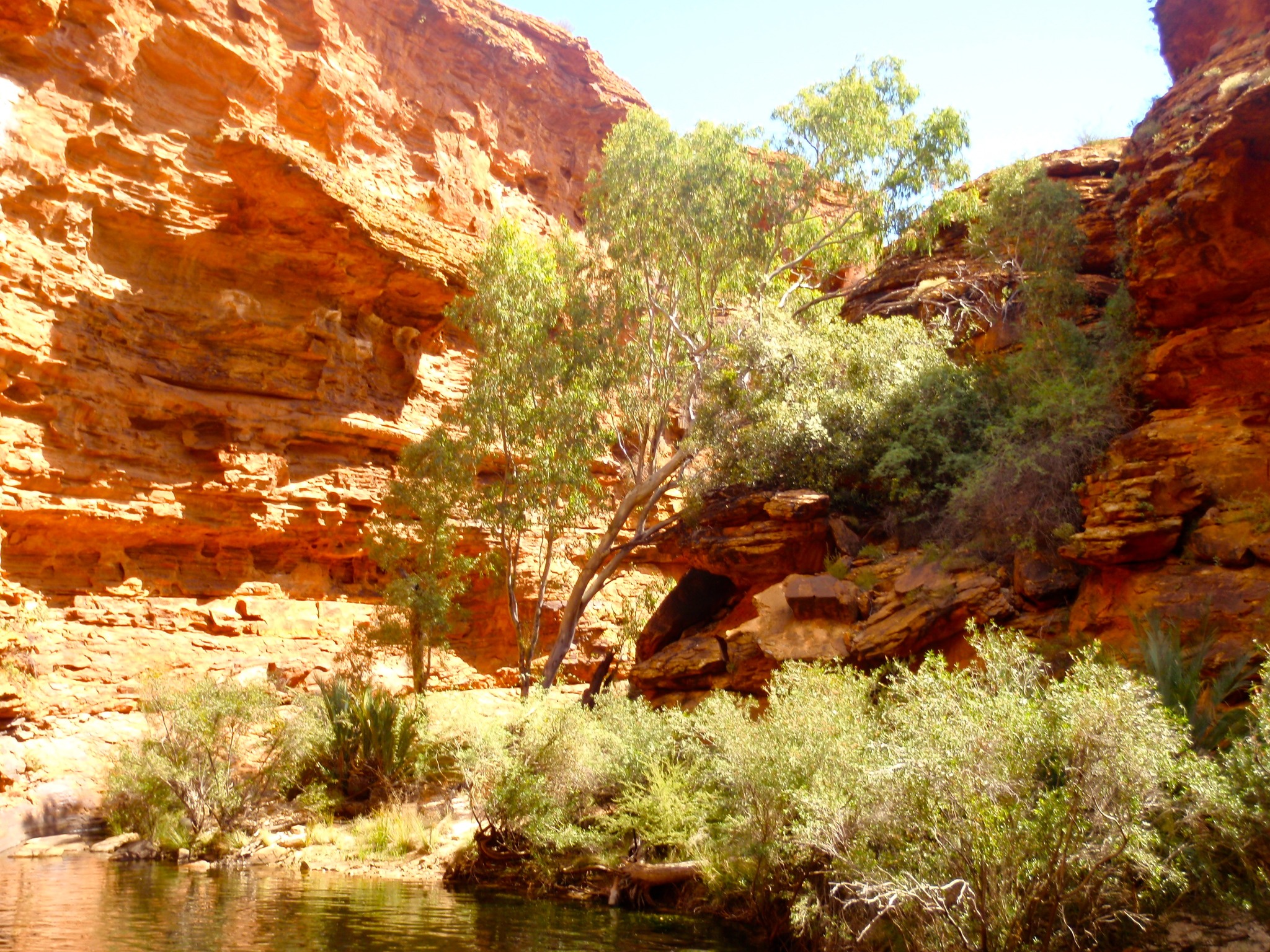 As the voices approaching grew louder, we woke from our siesta and realized we had marooned ourselves from our clothes.

Without time to grab our underoos, Lee and I retreated into the water hoping its shimmering surface in the afternoon sun would conceal our lack of swimwear. As we coyly hid, an elderly group of German women in big floppy sun hats, safari shirts, and clicking trekking poles threaded the cycads, scattering a flock of noisy budgerigars.

The five capri-ed women ooooo and awwww-ed and wunderbar-ed at the gorgeous oasis and were surprised to see others, but exchanged the typical pleasantries one does when coming across other travelers in the bush. Their German accents admitted they were tourists from abroad, just like us.

Lee and I had thought that by “casually” wading in the waters the women would be none the wiser, but one of them jokingly caught our bluff, “we came all the way from Deutschland to see platypus, but all we see is naked man!” All five erupted in light-hearted laughter, before two of them stripped to their undergarments, removed their shoes and socks, and joined our mortified selves in the cold gorge water. 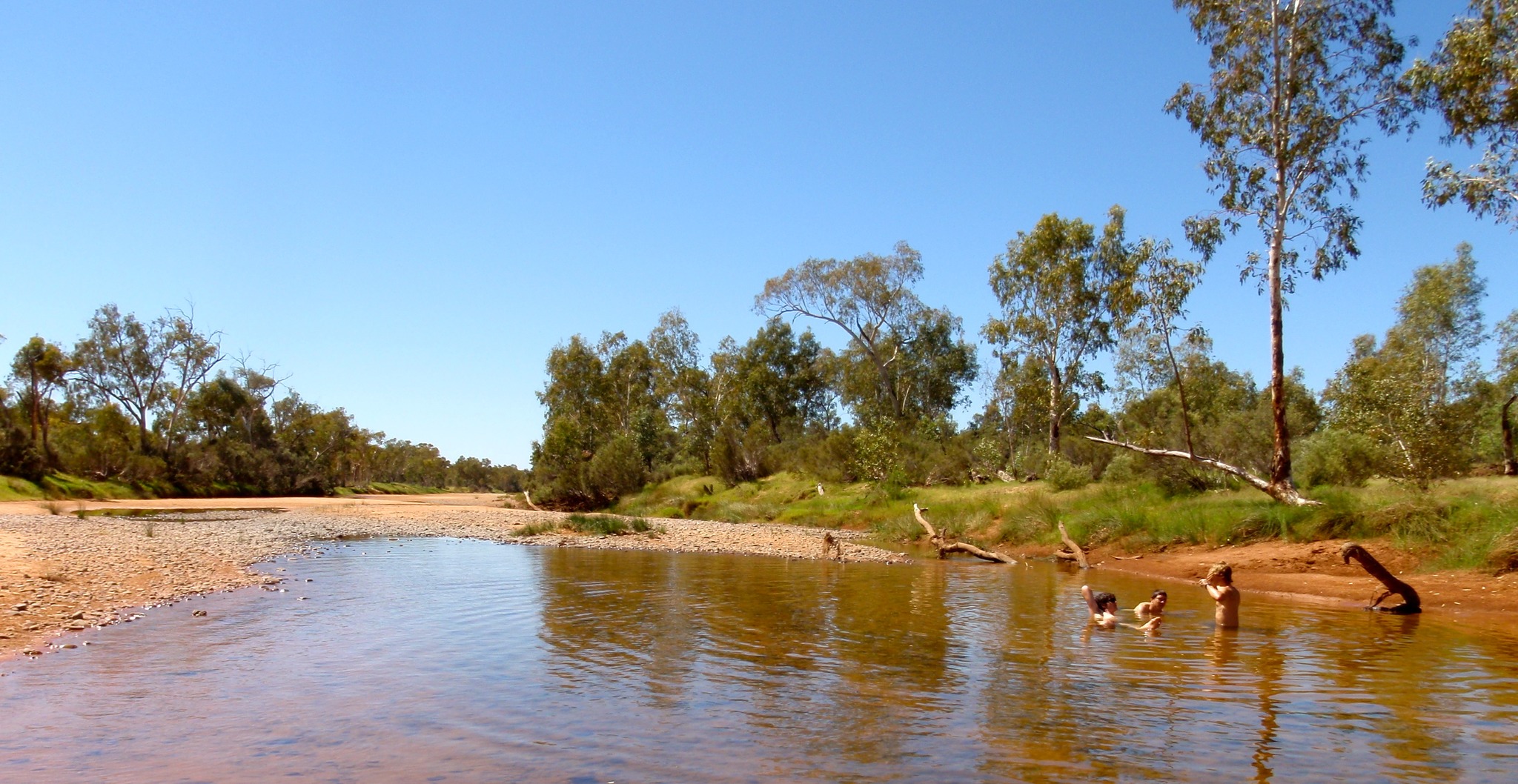 Platypus, unfortunately, do not habitat the Outback, preferring the eastern riparians of the continent, but we did not allow ourselves to be the bearer of this misguided news. To our discontempt, the women swam in the water much longer than we anticipated, to the point where we became goosebumped, eventually chattering our way over the sandy drainage to our clothes beneath the bone white eucalyptus.

As we did, the women chorused in giggles and whistling across the surface of the water in amusement. We dried off and yanked on our shorts and continued to *casually* make small talk as they women told us where they had been on their trip and where they were going. They filled us in on their highlights and favorite swims in the Territory after seeing our enthusiasm for a skinny dip.

When we left to trek back to our car to set up camp for the evening, one of the women who hadn’t gotten in the water yet said, “now it’s our turn to do the naked swimming!” her accent made the phrase particularly amusing and her wink infused its charm. 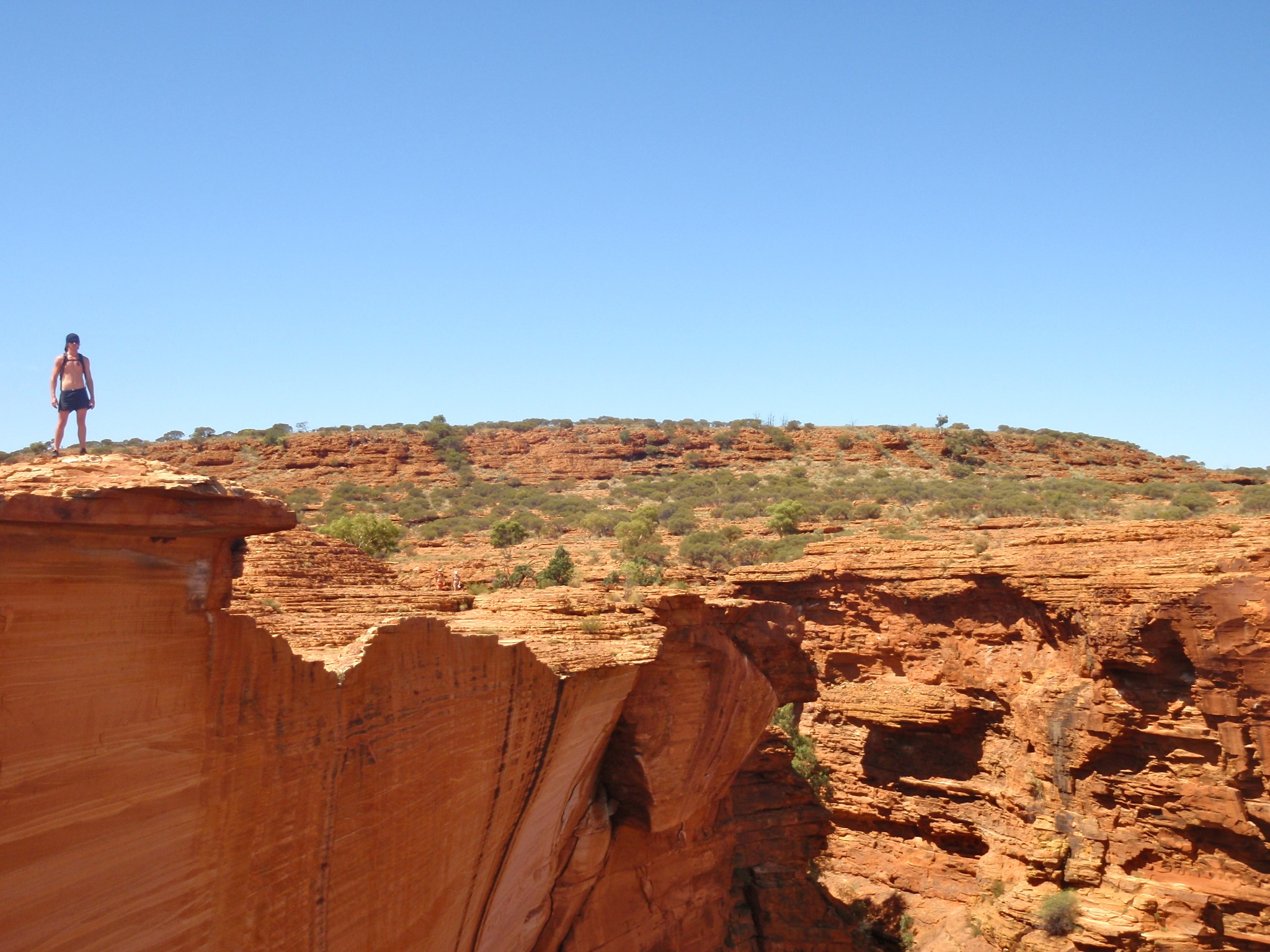 Many mistake the “Outback” as a landscape only worth visiting to briefly see the “The Big Rock,” arguably Australia’s most famous natural landmark. Known locally as Uluru, the red monolith rises more than a thousand feet from the arid plains of the Outback. The unique sandstone formation became a poster child for Australian tourism as international visitors began tacking on trips to the Red Centre to their vacation down under.

But it’s the visitors who choose to tour the beyond the resplendent Uluru that are treated to lesser known gems from Kata Tjuta, the mysterious Attila mesa, the surprising beehive formations of King’s Canyon in Watarrka National Park, and my clear favorite of the Territory the chain of swimming holes within the idylls of the MacDonnell Ranges.

The pools of these mountains hold the best swimming of the Red Centre, only a small section of the Northern Territory that is more than twice the size of Texas! For a true aquatic road trip, combine the possibilities of northern latitudes at the “Top End” of the Territory where the Outback meets the tropics. Where rivers and billabongs provide adventurers with ample swimming opportunities in the legendary national parks of Litchfield and Kakadu. 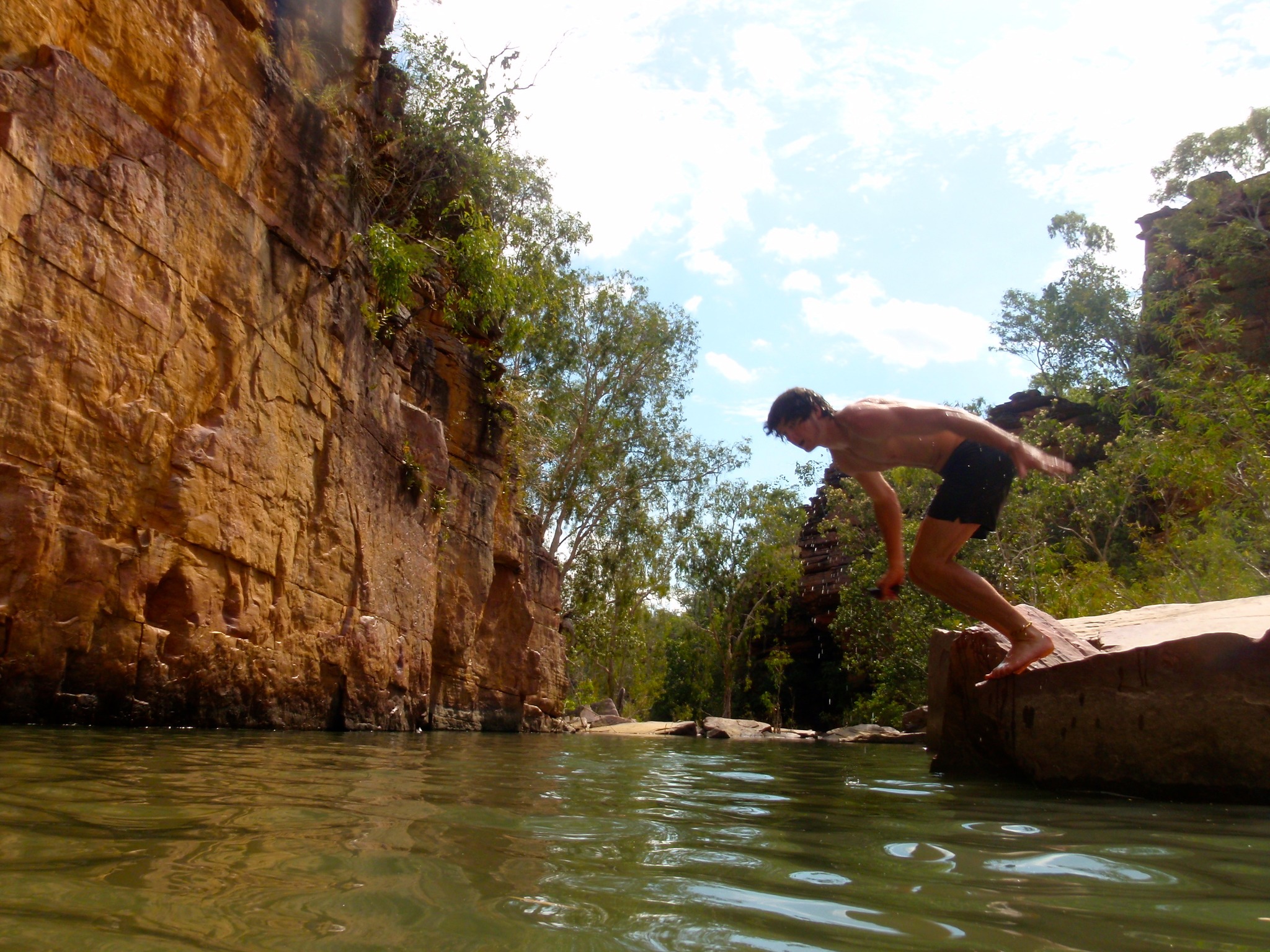 The Top End certainly holds more swimming potential than its central counterpart, but the region is far more precarious as both salt and freshwater crocodiles often infiltrate the swimming holes. Always be crocwise and know that if sixteen-foot-long living dinosaurs aren’t your cup of tea, stick to the swims of the Red Centre.

Lee, myself, and two other friends decided on a three-week trip in the Territory after hearing about its vast wilderness, small crowds, raw adventure, and epic swims.

We picked up a Toyota RAV4 from Wicked Campers, a fun, ostentatious company with a fleet of spray-painted campervans and four-wheel drive vehicles, after flying to Alice Springs from Melbourne. We went during the April shoulder season when days aren’t too hot and desert nights don’t dip below freezing.

After a brief trip to Uluru, we took the permitted Mereenie Loop to the MacDonnell Ranges and spent an entire week cannonballing our way across the best gorges. Redbank Gorge was our favorite for slot canyon exploration, Ellery Creek Big Hole for cliff jumping, and Ormiston Gorge for socializing. 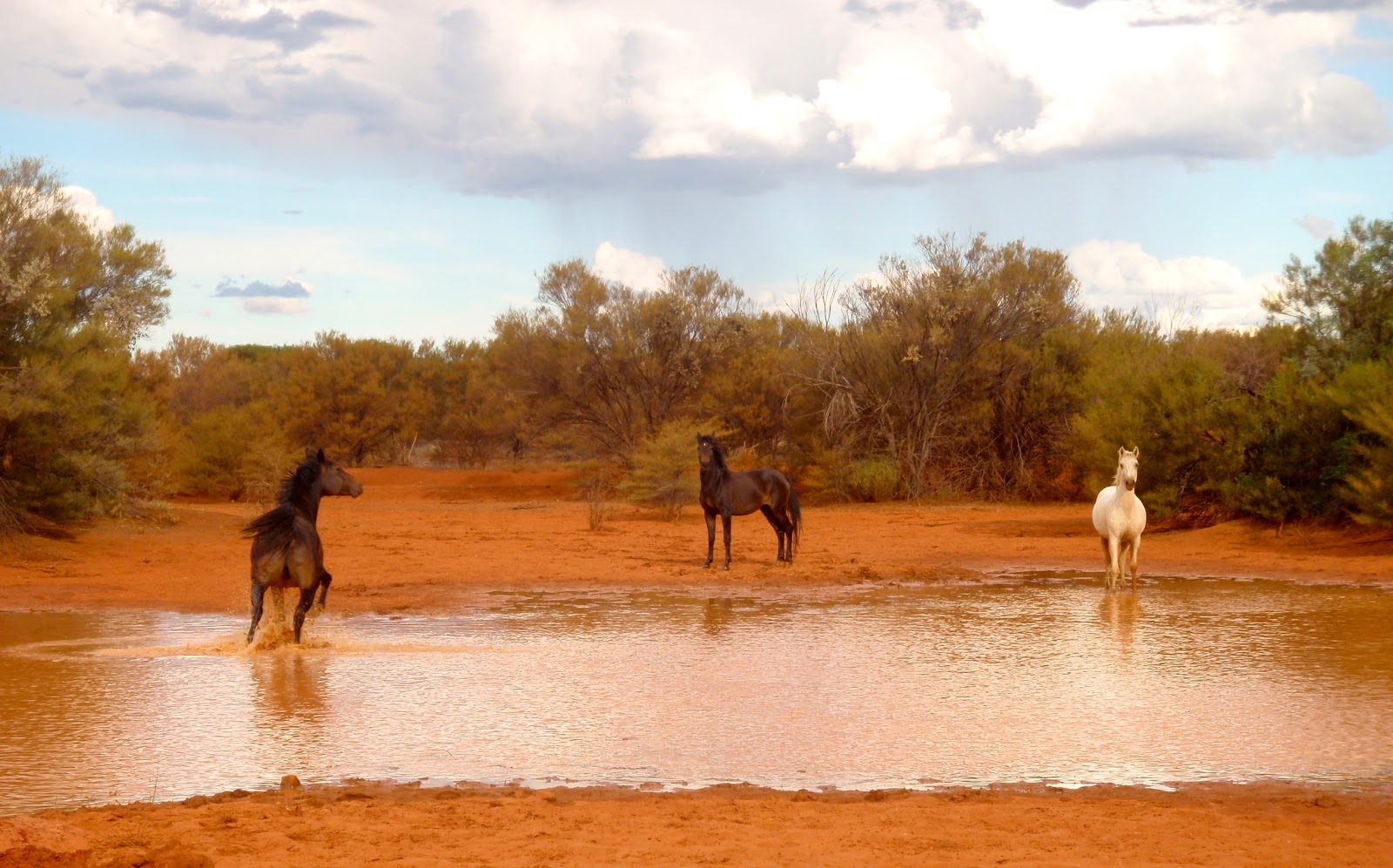 After we left the splendor of the MacDonnell, we connected to the Stuart Highway and followed the sealed road north to Darwin, the Territory’s small capital with a population of just over 100,000. The highway cuts across arid wilderness and vast cattle stations thousands of heads strong. Brumbies, red kangaroos, dingos, monitors, snakes, and camels roam the expanse while massive “truck trains” three to four semi-truck containers long plow across the highway.

On our drive, we were relieved to continue our aquatic voyage as we came across the warm pools of Mataranka Hot Springs, where we soaked beneath a full moon. We were happy to rinse in the natural cliff showers of Umbrawarra Gorge. And we were exuberant in the falls and natural water slides of Litchfield National Park. 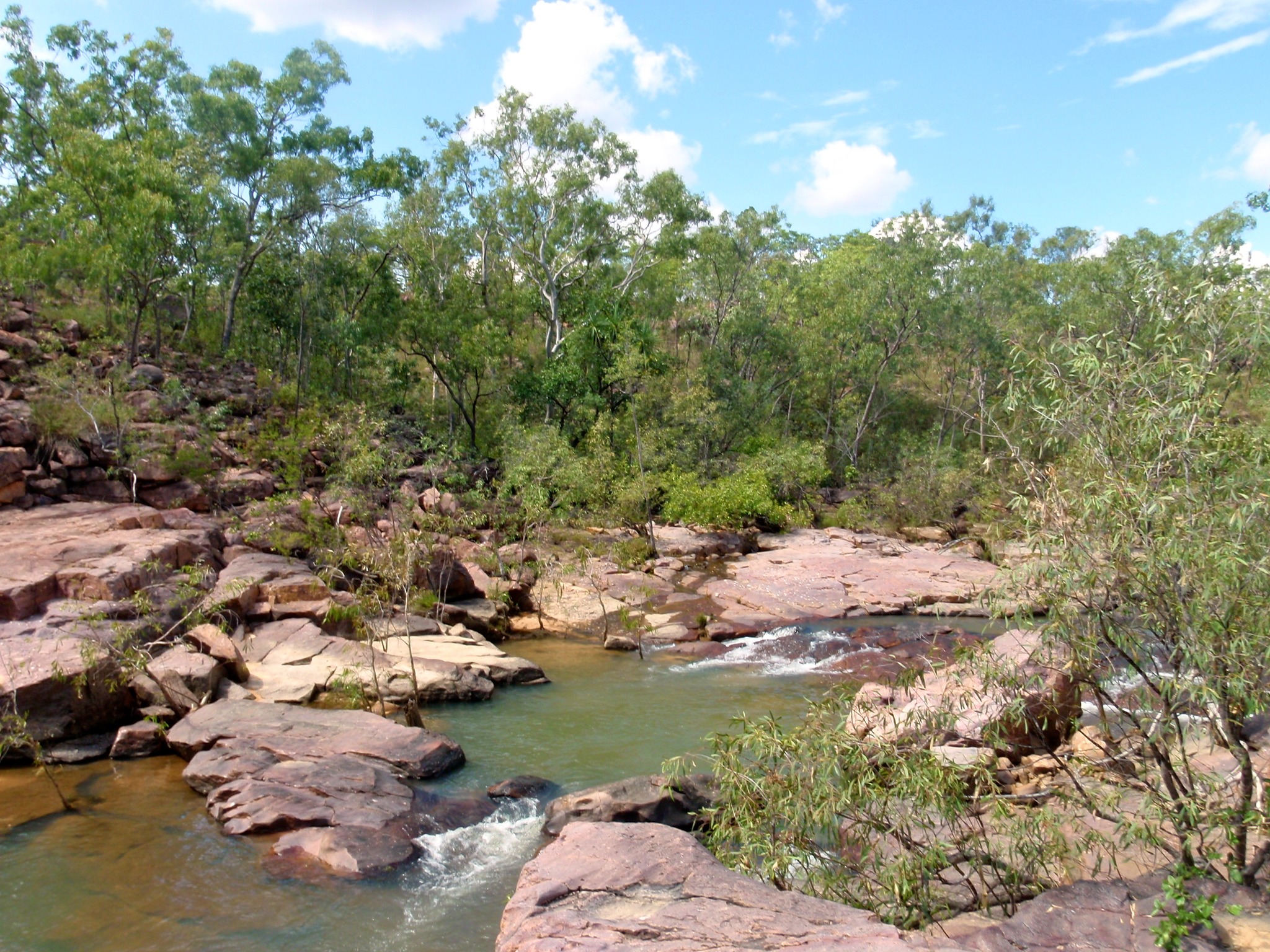 Litchfield proved memorable but its proximity to Darwin and its heavily visited campsites made us miss the remote desert swims of the MacDonnell, now a thousand miles below us, where we could better relax, never having to worry about the freak possibility of a crocodile.

On our final day before flying back to Melbourne, we dropped our rental car in the small city of Darwin and hoped for one last dip to culminate our swimming tradition. But this being Australia, we were denied the swan song swim of our trip, for not only were there crocs and sharks darting in the harbor by the white sands of the city’s Mindil Beach, there were also millions of lethal box jellyfish below the bright turquoise surface of the sultry Timor Sea.