In the middle of the night in late July 2006, a few paparazzi stalked the late queer icon George Michael from the bushes of Hampstead Heath, London’s largest park. He ridiculed the photographers for invading his privacy as they snapped photos of him exiting the hedgerows with a burly 58-year-old.

In an interview shortly after the tabloids were published, Michael said, “The fact that I choose to do that on a warm night in the best cruising ground in London – which happens to be about half a mile from my home – I don’t think would be that shocking to that many gay people.” 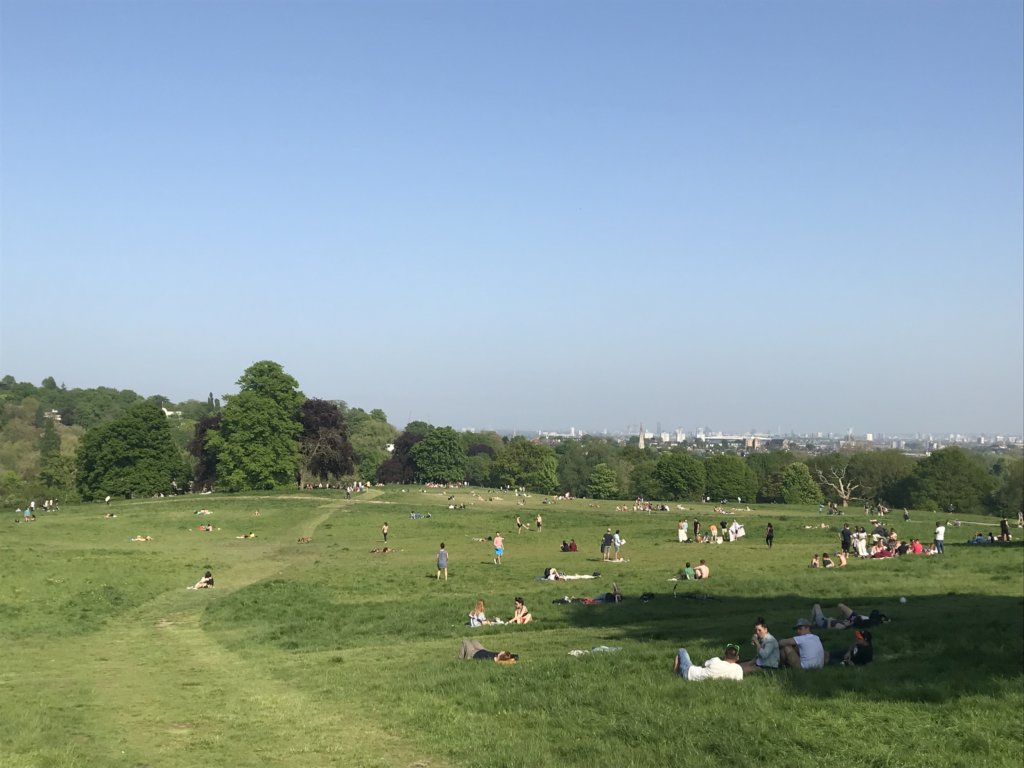 To this day, 12 years later, the Heath still remains one of London’s cruisiest places, but there is far more to the park than a clandestine parade through thickets of lurking eyes, butt grabs, and crotch pats below the razzle-dazzle of a North London moon.

At 790 acres, the park is the green lung of London, and on warm spring, summer, and fall days, Londoners come out in gaggles. There are loving picnickers on fleece blankets discreetly complementing their brie with pinot grigio, university students with their shirts off reading Kafka, rambunctious birthday parties of freeze tag-playing children, barefooted football players juggling with their mates, jazzercisers beside the lush woodlands, and birders on the lookout for blue tits, coal tits, and ring-necked parakeets.

But most sensationally, there are some 25 ponds freckling the green landscape, some of which are swimmable (year round!) and looked after by lifeguards. Among the most popular are the ponds on the eastern shoulder, just off Millfield Lane. There is the Mixed Bathing Pond for all genders, as well as a separate Highgate Men’s Bathing Pond and the Kenwood Women’s Bathing Pond, which as of December 2017 officially welcomed trans women. 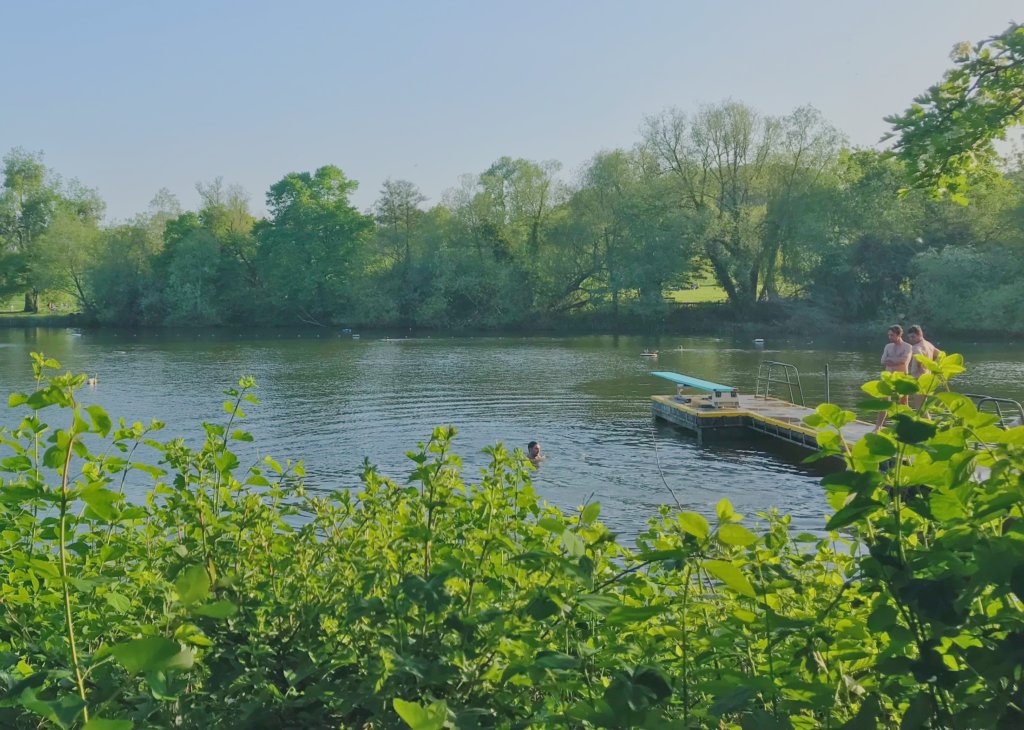 At the recommendation of a daredevilishly handsome local, who I met while riding bikes the day before on the canals of London’s Eastside, I made my way to the Highgate Pond, because I will forever be a sucker for a swim.

I had grown tired of perusing museums, pretending to gawk at the famous architectural sites, palaces, and towers all fat with tourists. I was no longer impressed by the beefeaters and their silly red dresses and even sillier black hats. I did not want to hear another word about the Royal Wedding, I wanted to see Londoners letting loose in the good ol’ out of doors—I was ready for cold water and a frolicsome afternoon.

I grabbed a towel from the hotel, my book, my journal, and descended to the tube from Shoreditch’s Old Street and sweated ridiculously as the stuffy London Underground zipped me 30 minutes across town.

As I made my way to the ponds, I strolled over the rambling clay hills of the park punctuated by great willows.  And as I did, I felt two things simultaneously. The first was that since I was among such vast, well-kept English lawns (and had read a great deal about England in high school and college), I felt like what I imagined Elizabeth Bennet of Pride and Prejudice once felt like as she rebelled against the patriarchy of her time, running on the wide-open meadows of Netherfield as the heroine of her own narrative. 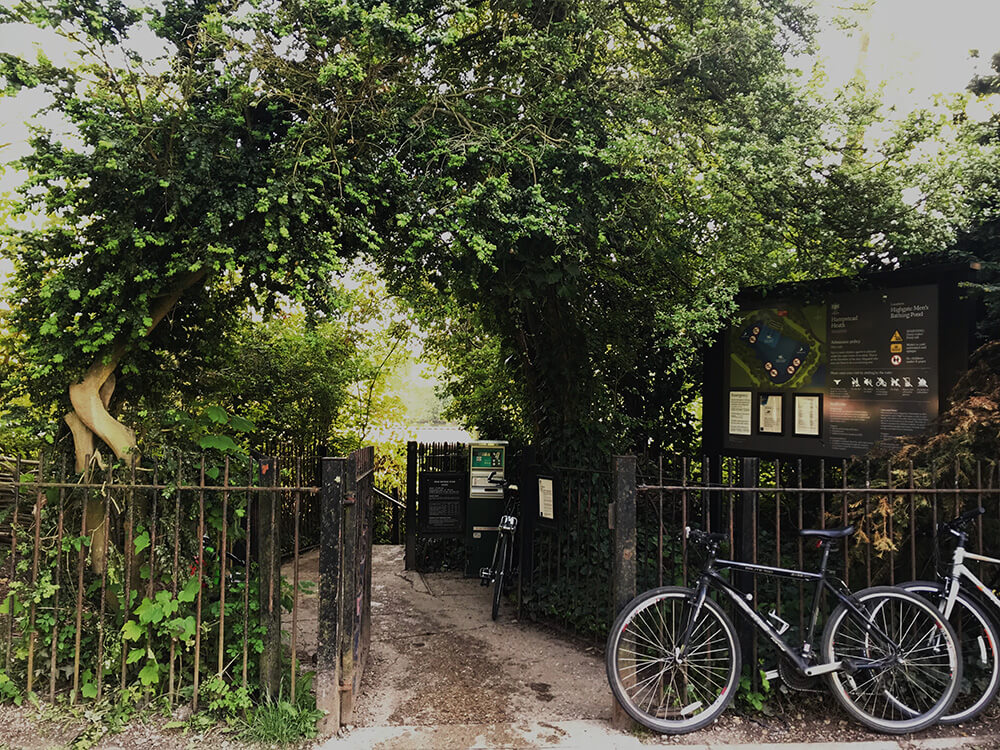 The second feeling was cheekier, most likely because I was at the Heath. I felt the chutzpah of a young, hairy-chested, mullet-flaunting sex pot—like George Michael in the Wham! days of yesteryear.

Isn’t it wild that simply by being in a new place, full of sunshine and possibility, we can acquire wildly delusional confidence?

By 3pm, I had strolled half a mile from the Camden Underground and arrived at the Highgate Pond in brilliant sunshine as speckled wood butts and red admirals flopped happily from yarrow to purple harebells. It was a Sunday and one of the first sunny days of the season. It was the kind of Sunday everyone had been pining for, to darken their winter hues and flirt like floozies with the shining sun. The type of day that made one say, “Zip-a-dee-doo-dah!” and “zip-a-dee-ay” but also: “my, oh, my, what a wonderful day!”

On the outskirts of the men’s ponds, hundreds were squeezed into a sliver of grass beside the tall trees—here was excitement for warmth, for heat, for sun on bodies, for the possibilities of summer, perhaps, even for horniness, for leisure and for checking out the sun spilling itself generously onto other bodies. 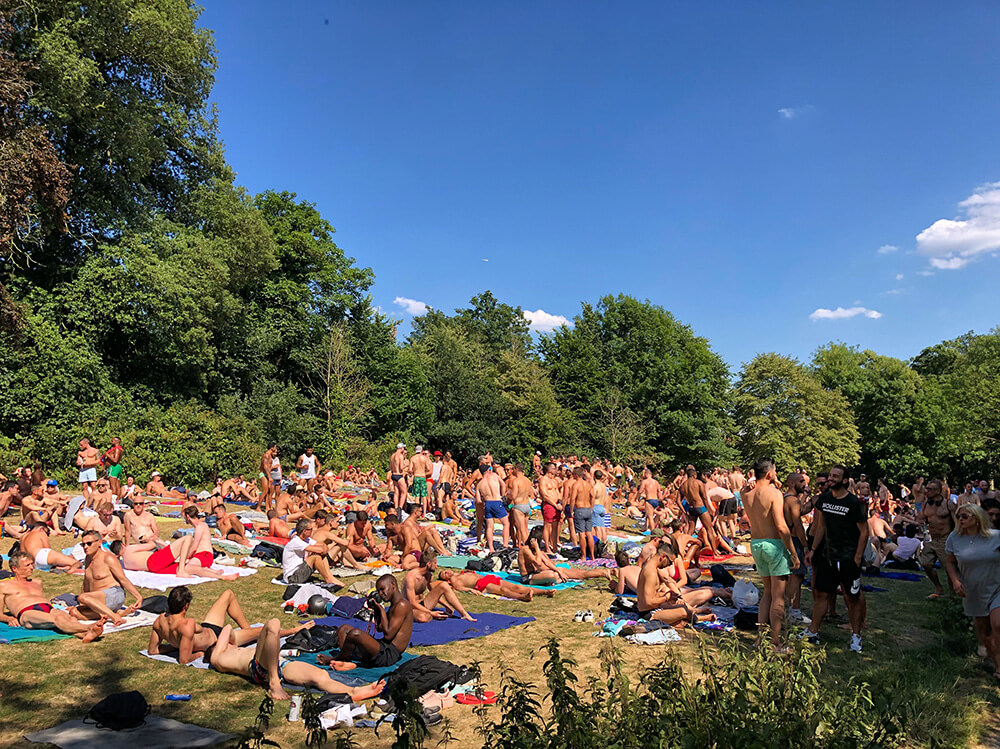 Well, to begin, I no longer felt quite as sex-potty as I walked the commons of nuclear heterosexual families—there were cliques of men proudly displaying six packs that were cut so deeply they could hold an entire quart of lemonade in their chasms and butts so rotund I was becoming quite suspicious that they had snuck a soccer ball or two in the lycra swimsuits covering their hindquarters.

But never compare yourself to others, old chap, I told myself— everyone was wonderful and I was a part of their afternoon contingent. Some were paler than others, some had the littlest darn nipples I’ve ever seen, while some had nips as enormous as a £2 coin. There were bruin bellies and hairy backs as thick as carpets, freckled shoulders, as well as smooth, completely shaven legs beside wild Hobbit feet, and all of them were canoodling in the sun.

I read on the grass, alone, for half an hour after arriving, before a man around my age in glasses and a messy bird’s nest of hair,  sat nearby and read his own book—Blood Wedding (Bodas de Sangre) by Federico García Lorca—and soon we chatted and I found out that he was a playwright himself, recently single, and a grad school student who resented his ex-boyfriend who he claimed had become much funnier since they had broken up. 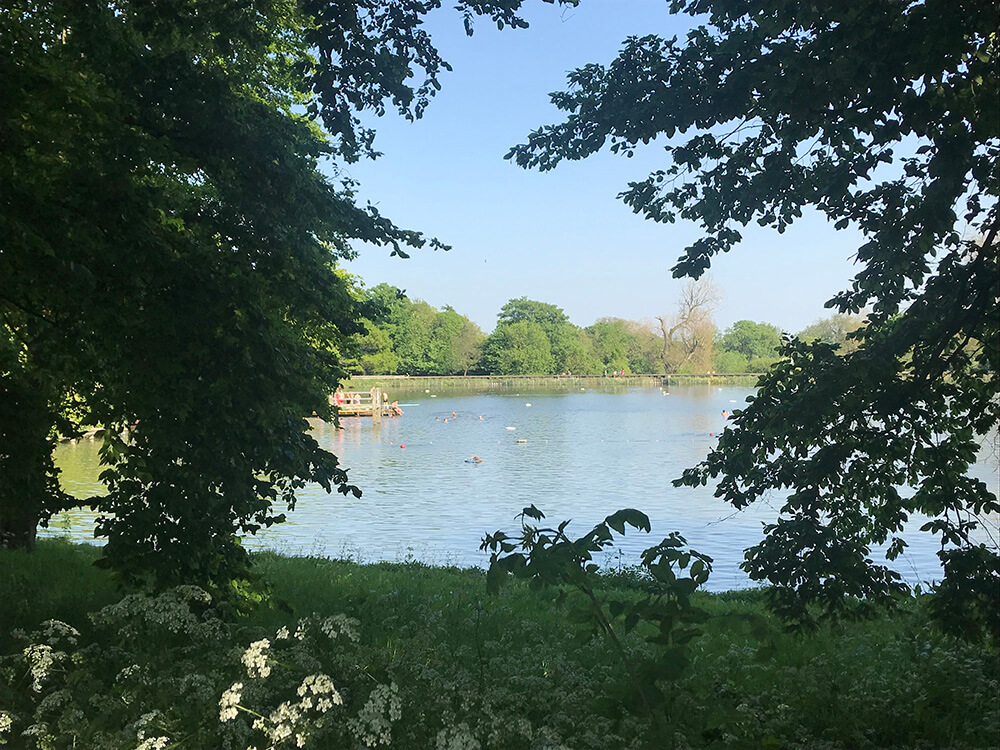 I did know, man.  I mean, what’s worse than dating a bore, only to find out they’ve become hilarious after parting ways? And worse, apparently, this ex-boyfriend was now writing plays too—and apparently they were good.

“I come here every Sunday,” he told me. He never had to worry about seeing the ex-boyfriend because he was a “vampire” who hated the sun—and swimming.

“It’s the only place I feel like I can relax, have a spliff, cool down, and I always make a mate,” he said with a wink.

And like that, I had been upgraded from the ‘stranger by the pond’ to ‘mate’ in the matter of a casual conversation. What wasn’t to like about the Brits?

But soon, the humidity and heat persuaded me it to swim even though I was enjoying talking spitefully about someone else’s ex I didn’t know (but was honestly curious to meet to see how funny he really was).

I left my new mate who wasn’t yet ready for a dip and made my way to the busy gate of the Highgate Pond where men of all ages whizzed in and out, every single one ignoring the £2 entry fee on a self-service payment machine. Through the doorway marked “Men Only” a large concrete courtyard opened where men dried off, changed, and loitered.

On the left, in a small section were the nudists. The classic nudists you can already imagine without me even describing them—but I will anyway.

Mostly baby boomers unafraid of their bodies, unlike those modest changing-under-the-towel millennials. Some were bald, some were alone, and others were in groups with such casual rapport it appeared they were weekend regulars. They must be here every Sunday, I thought. They gathered and talked and there seemed to be a general consensus that like the invisible boundaries at a nude beach, this walled off area was the place for al fresco butt nakedness and who would complain about that?

The other section was much larger, like an outdoor locker room where brief moments of nudity were common. Pedestrian clothes were shucked and exchanged for board shorts, rugby shorts, booty shorts, or athletic cut briefs. Boyfriends changed next to each other beside straight fathers and their sons. Straights beside gays, bros between queers and none of them with fears for they were bonded in a comradery of mirthful summerness because beyond the changing area was the dock, and at the end of the dock, there was a diving board that launched you into a pond that persuaded even the most mature man into a brief cannonball of puerility.

I dropped trou and changed into short, leggy swimmers and felt quite European for the first time, maybe ever, as I made my way down the dock toward the diving board where there was a queue.

As I waited, I observed the pond that was sunk into the ground, dug in the 17th or 18th century and filled by the underground waters of the River Fleet and guarded by large three-story tall trees that hid the pond coyly from onlookers. It was a private sanctuary of freshwater dunking. 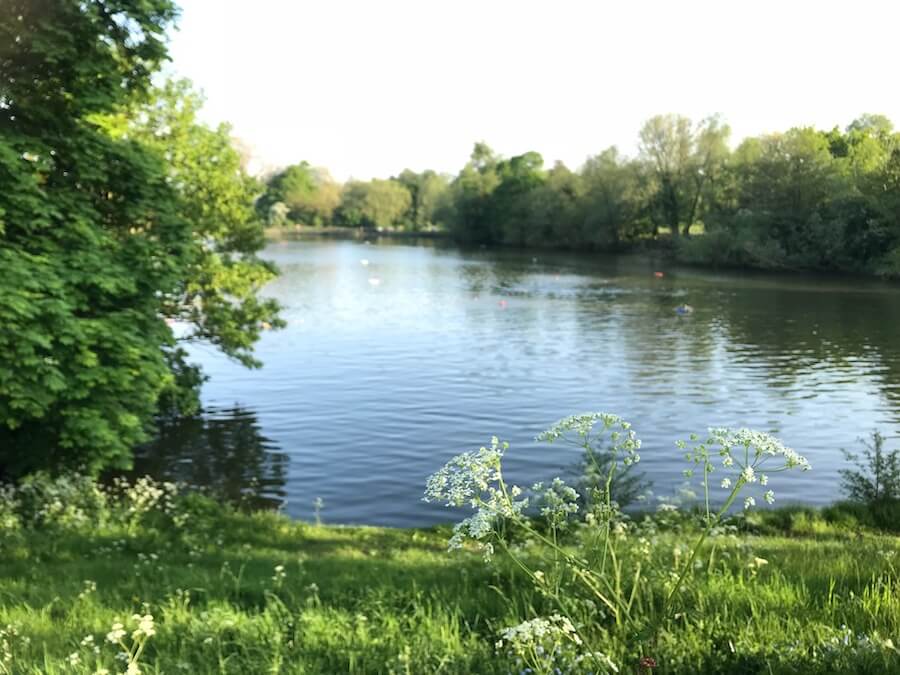 “That’s bloody cold!” one rugby-built man yelled to his friends after attempting a dive that became more of a belly flop in his clumsiness. I was, however, happy to hear the word “bloody” again as the synonym for “very.” It’s how I knew I was again in the Commonwealth and reminded me of my Australian days, years ago.

“That is bloody cold!” One of his mates yelled soon after a strange leap off the board that was somewhere between cannonball and a nerdy nose plug jump. But there was laughter as all of them pulled themselves from the dock for another go.

And then, it was my turn.

I stepped onto the diving board and looked out onto the water of the pond where wild lap swimmers went from buoy to buoy, where two Egyptian geese nestled in the reeds and yapped up an angry duet at a nearby squirrel.

I had not dived in a while, but with this group of well fit mates nearby, I knew the pressure was on, even though the stakes were incredibly low after their pitiful diving performances despite their clear athletic prowess.

As I walked to the end of the board, again, I was again hoping for the repose of an Elizabeth Bennet, but also, again, the nonchalance of a George Michael fresh from the cruising hedgerow.  So I leaped, brought my hands together, bent my body in a nice arc, pointed my toes, and plunged into the cold waters still lingering from winter, slowly being persuaded by summer.

If I were to rate the dive, it would have been an 8— except for the fact that my shorts weren’t tied tightly enough and the men on the dock had let me know as soon as I surfaced that they had been yanked over my bum.

“That’s a bloody white arse!” They cackled, they laughed, and I loved the cheekiness of it all—here in London, we could be teenage boys again and tease strangers for lunar buttocks.

The water was fresh, the men and boys were swimming all around in jocundity as the cicadas buzzed on the shore plants, and the trees dazzled their lime green leaves like eccentric jazz hands in the gentle afternoon breeze.

I’d be lying if I said I didn’t pity the tourists in humid, concrete traps of the city center—Big Who? The Tower of Where? Buckingham What?

I put my hands behind my head, puffed my chest to the sky, floated, and looked at the clearest bluebird sky I’m sure London’s ever seen humming George Michael’s “Outside”—

Back to nature, it’s human nature.