I remember my first visit to Reno fondly. My brother and I were on a 3-month-long road trip through the west coast and we were passing through so we decided to stay a night. We had asked the front desk attendants at our hotel about sushi restaurants in town because Daniel had a craving, even though I had a rule about never eating sushi from a place not located next to an ocean (this was 2011, before my trust in sushi restaurants grew exponentially). When the person working behind the desk referred us to a local strip club, I looked at my brother in disgust while mouthing the words, “we have to go there.” It wasn’t the gentleman’s club that disgusted me; it was the thought of eating sushi inside an establishment that was never meant to be a sushi restaurant. (Side note: A quick Google search will lead you to actual sushi restaurants in Reno that are said to be excellent, I wouldn’t know because I didn’t want to taint my personal sushi recollection during my most recent trip.)

My brother and I did actually have an amazing time inside the strip club. The woman who gave me a lap dance (don’t ask, we all do silly things when we drink) is still a friend of minethanks to Facebook, and one of my tattoos was inspired by hers, so truly, a lot more came out of that night besides eating sushi while watching women dance for dollars. As for the sushi, I honestly don’t even remember eating it, but Daniel swears it was worth every penny.

Fast-forward many years later, I found myself in Reno once again, but this wasn’t the same town I had remembered. For one, the famous sign with the words, “The Biggest Little City In The World,” was now a shiny new blue (literally freshly painted the day I arrived). If you’ve ever been to Reno, you probably have an idea of what the downtown area looked like, but it has changed, not entirely, but mostly. It’s clear that an effort has been made and the city is continuing to make efforts to keep it that way.

If you are into Burning Man and appreciate the art that comes from the party in the desert, then a trip to Reno is in order. They have some of the most incredible pieces of art from past Burning Man festivals on display in the downtown area. We are talking massive sculptures on display; there is even an entire area dedicated to some of the sculptures. My personal favorite though is the iconic “Believe” sculpture created by Jeff Schomberg that now sits in downtown’s Art Plaza, formerly known as City Plaza, and is alongside other works of art that will now grace the popular tourist spot. 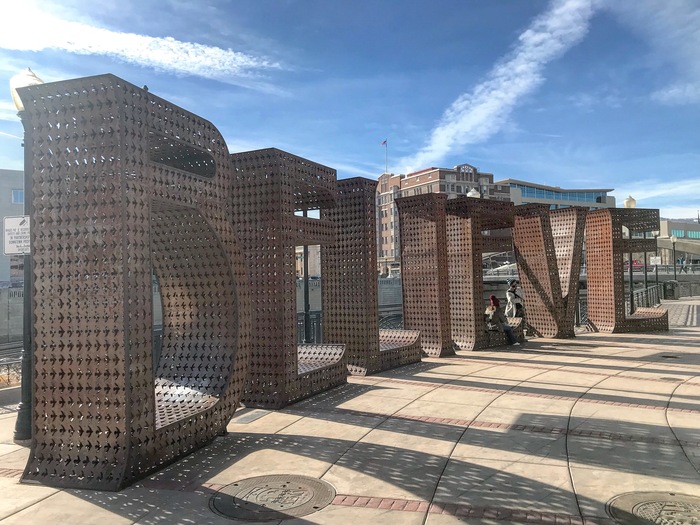 The Nevada Museum of Art is also worth a visit when in Reno. Not only is the art on display incredible, but they also are responsible for ingenious collaborations of art, including the Seven Magic Mountains that are on display outside of Las Vegas. The museum, with artist Trevor Paglen, is also gearing up to launch a satellite into space. The Orbital Reflector project will place a 100-foot long inflatable, diamond-shaped balloon sculpture into low Earth orbit. The geometric object will reflect sunlight while flying over the night side of Earth, making the sculpture visible, without a telescope, to observers on the ground. This will be the first satellite to exist purely as an artistic gesture. 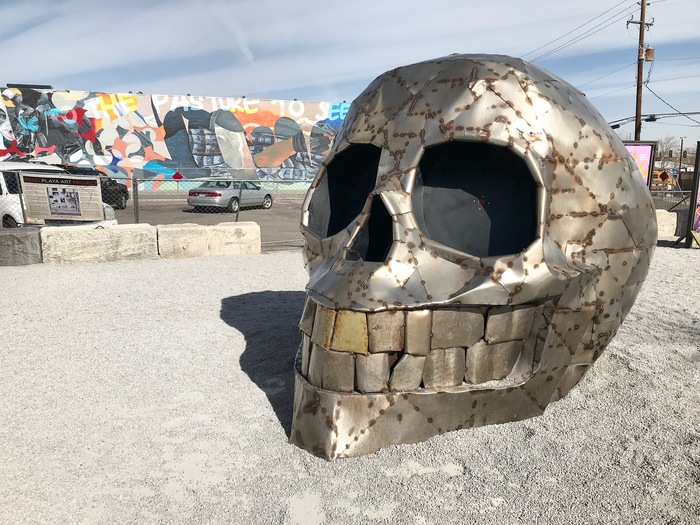 But the most exciting art in Reno is most definitely the street art that has taken over most every blank wall in downtown. The city has worked with local as well as internationally renowned artists to cover the walls of buildings throughout downtown, with the result being some of the most visually stunning murals, all uniquely different and stimulating to the eye, not to mentiontotally Instagram worthy. 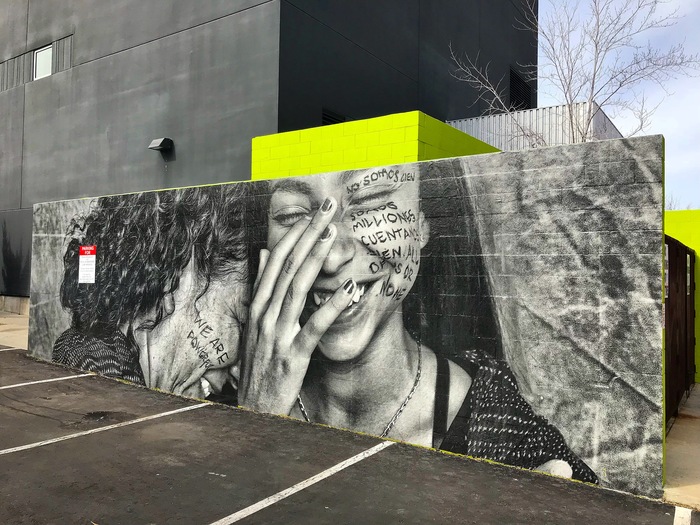 Tahoe Is Literally Right There

If you need another excuse to visit Reno, there’s a really good one, Tahoe. Located just a short drive away is Lake Tahoe, and during the winter season, some of the best ski resorts on the west coast. Squaw Valley, which hosted the 1960 Winter Olympics, is highly recommended as it’s home to Alpine Meadows, a destination within that is filled with endless activities including the Olympic Museum, snow tubing, aerial tram rides, snowshoeing, dog sledding, and much more, including killer skiing and snowboarding. For those who are snow sports challenged (like myself), private instructors are available for half or full-day lessons. There are also many options for après ski time, but the most iconic of them all is Le Chamois & The Loft Bar, an iconic destination that has been drawing people in for decades. There’s no better way to end a day on the slopes than with some pizza and beer at this place. 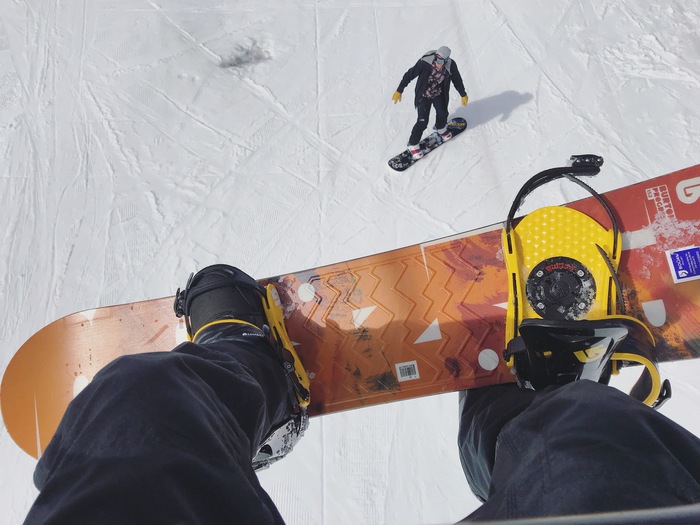 Located right next to the famous “biggest little” sign in downtown Reno is the Whitney Peak Hotel, the newest hotel to pop up, a luxury boutique that is non-gaming and non-smoking and which is also ultra pet-friendly. The hotel has 310 guest rooms, including a concierge club (for a premium) that includes breakfast and a private space to enjoy throughout the day. 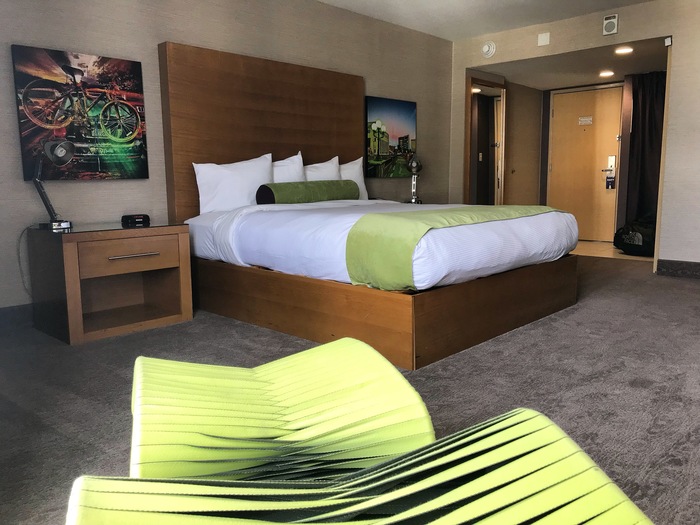 Other amenities include Roundabout Grill, featuring chef-inspired comfort food, Cargo Concert Hall – Reno’s best live concert venue and BaseCamp Climbing Gym, their 7,000 sq/ft indoor bouldering park. Not only that, the hotel also holds the Guinness Book of World Records “World’s Tallest Climbing Wall” which is located on the outside wall of the hotel, reaching 164 feet. 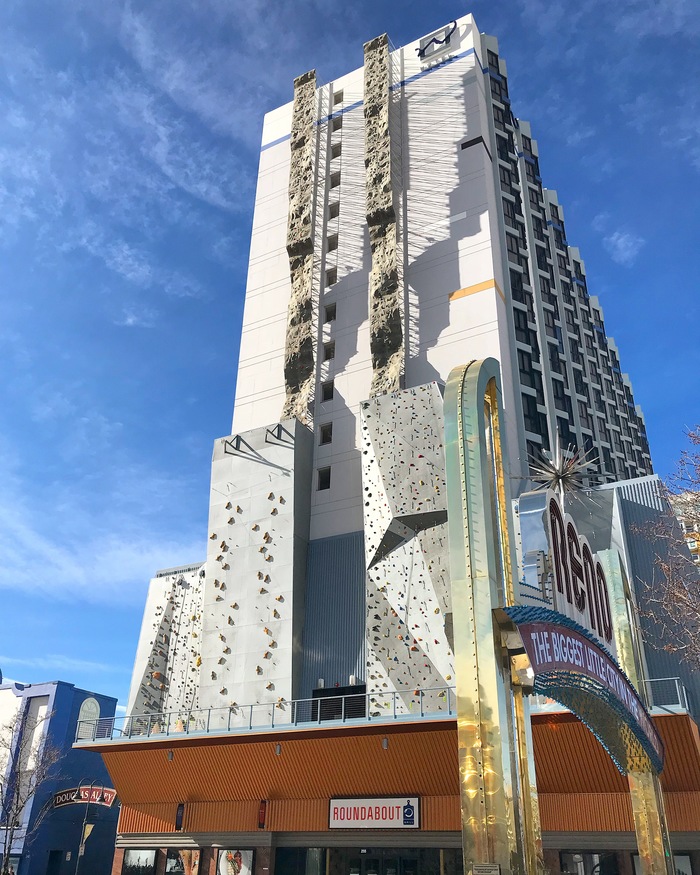