Just last month, the Tourism Authority of Thailand–a part of the Thai Government’s Ministry of Tourism and Sports –hosted the first ever Thailand LGBT Travel Symposium in bustling Bangkok. This is a monumental milestone not to be overlooked. While Bangkok ( and Thailand in general) has long been a queer travel hot spot for its more liberal views on gender diversity as well as the country’s notorious queer nightlife, the Thai government is now officially making a commitment to welcome queer travelers from the world over. Could this mean gay marriage is somewhere on the horizon?

Thailand is vast, from the pastoral strawberry fields of the North to the famous limestone islands of the South, so let the country’s capital city serve as your official introduction to “The Land of Smiles”. Whether you’re touching down for just a few days before touring the country, in town for Asia’s biggest gay dance party,  gCircuit, or staying for business for a few weeks–there is an endless excitement on the effervescent streets of Bangkok. From cosmopolitan restaurants to markets filled with the scents of sizzling curries, Bangkok is a wild concrete jungle of rivers, tight streets, and leaping overpasses–navigated best by tuk-tuks, motorcycle taxis, pencil boats, trains, cars, and of course, by your own venturesome soul.

Begin your the weekend on the Supanniga Cruise and sip your welcoming craft cocktails on this 40-person river cruise (many other river cruises are packed with 200-300 people and lukewarm buffets soured by amateur karaoke). Pass by Bangkok classics like Wat Arun and see the city at its most colorful as the golden afternoon casts itself upon the jagged skyline. 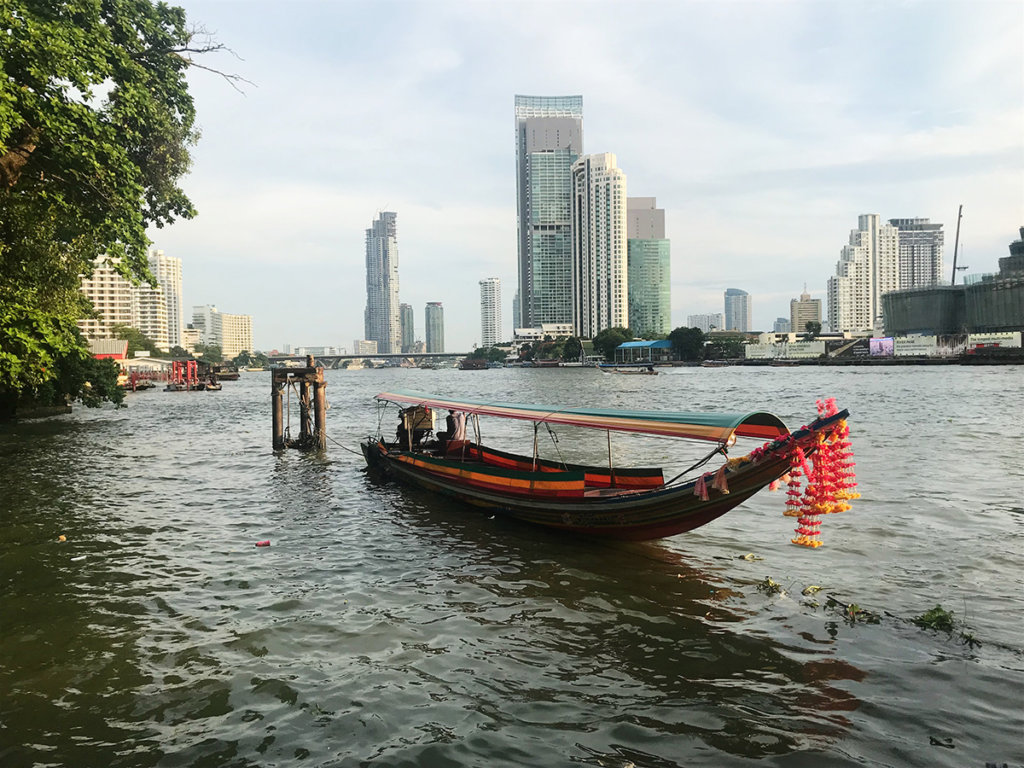 One of Bangkok’s buzziest neighborhoods is its emerging Creative District. Here, historic, modern, local, and European architecture are interwoven beside the mighty the Chao Phraya River. Many of the buildings are occupied by vibrant restaurants, bookstores, jewelry shops, and art galleries–like the Seredia Gallery which just featured artist Sudaporn Teja’s queer exhibit  “Loves Get Better with Time Quietly.” After the gallery, make some new friends at one of the district’s many cozy pubs like saki bar Jua or gin bar Teens of Thailand. 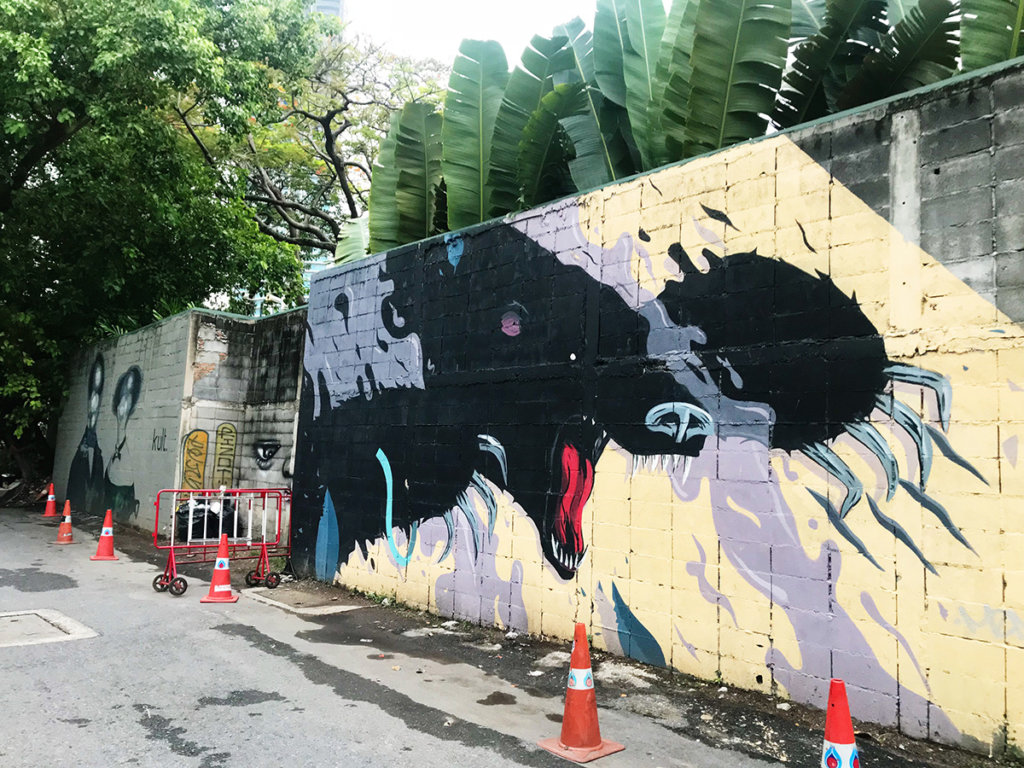 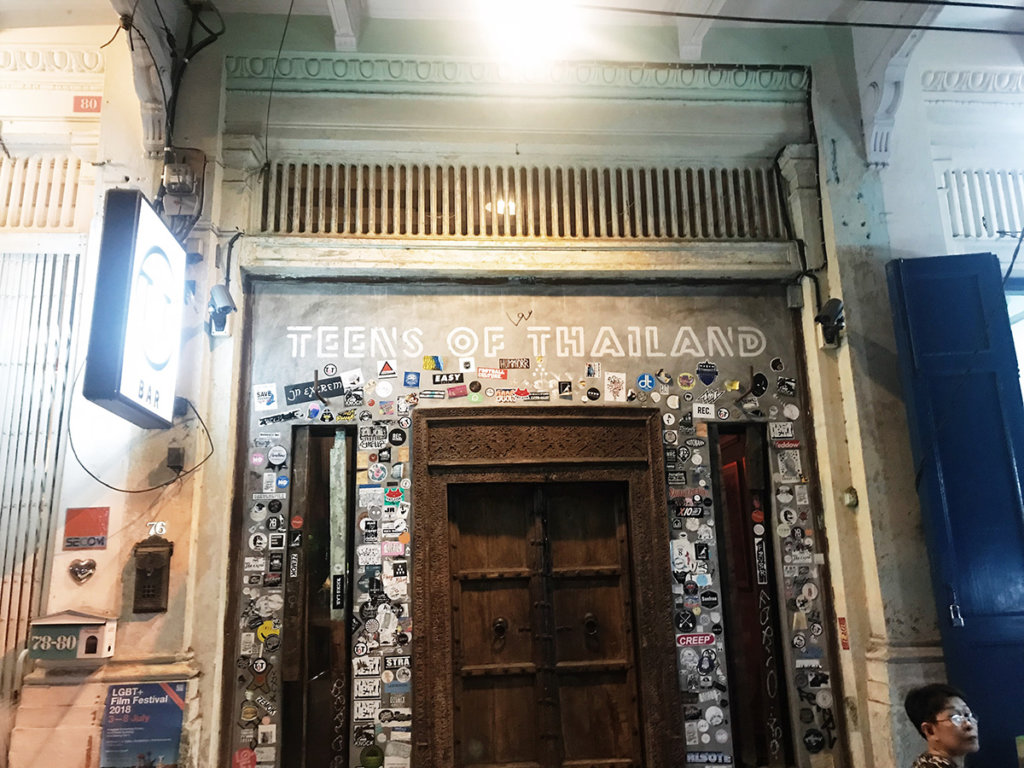 Let’s get straight to to the noms. Not far from the Creative District, just off the banks of the Chao Phraya, in a converted ice factory, is the handsomely designed The Never Ending Summer, which even after 12 days in Thailand, still held its own as my favorite meal of the entire trip and certainly, my favorite Thai meal ever. Each dish is exquisite and puts a zesty spin on a Thai classic.

The trick is to get up and beat the heat (and crowds) at the legendary Chatuchak Weekend Market–an outdoor market with over 15,000 stalls that covers 27 acres (you can literally and figuratively get lost here.) What are you looking to buy? Knock-off Aussiebum jock straps? No problem. A meerkat? A stingray? I’m vehemently opposed to the sale of wildlife, but anything and everything exists within the market, legal or not.  Soap in the shape of dicks? You got it. Dicks in the shape of soap? I didn’t see any, but I’m sure it’s there. Be sure to bring cash and follow your nose for the street food vendors and many restaurants tucked inside. Make sure to bring cash, and why not make your first attempt at bartering? 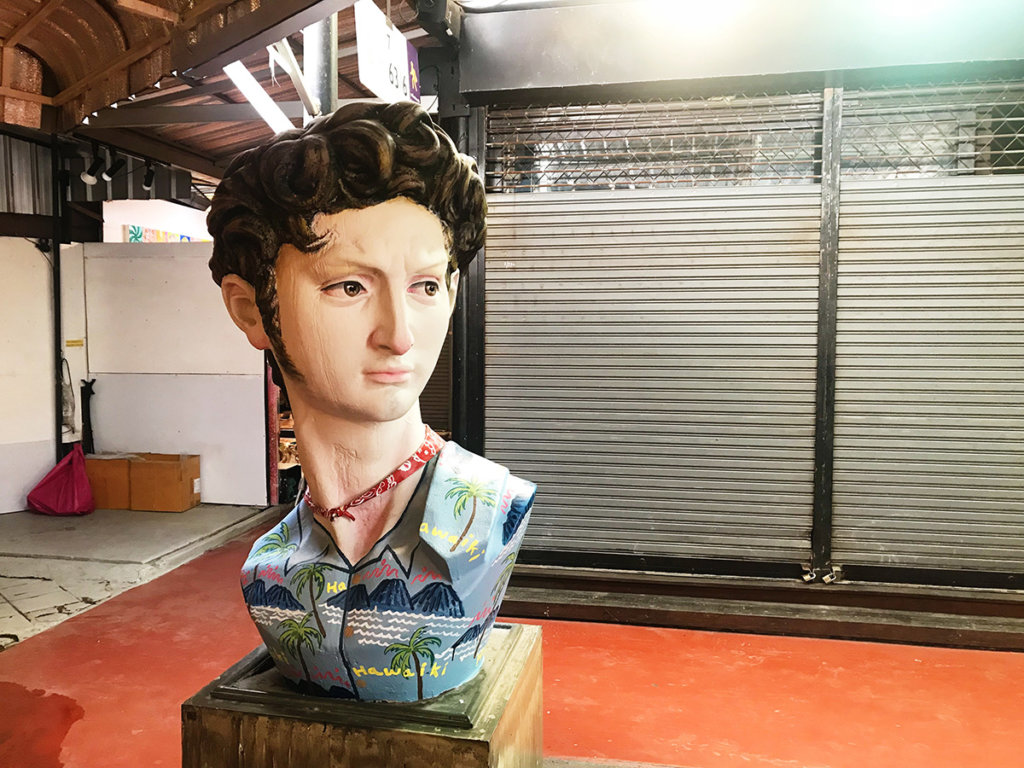 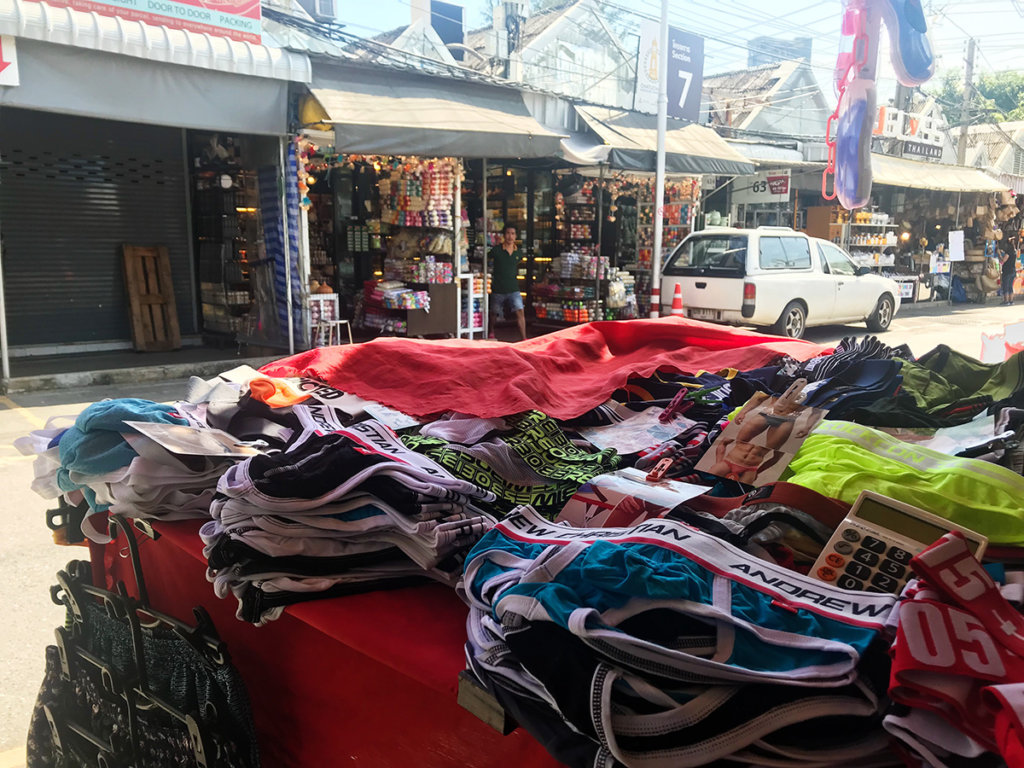 That was a lot of walking, and I know you broke a sweat and the heat has you snoozy. Let’s Wake up with a trip to Divana Spa for one of the best massages in town. What would a trip to Thailand be without experiencing a little nuat phaen thai (Thai-style massage?) With techniques nearly 2,500 years old, the Divana’s Siamese Relax treatment is a great pick me up that will rock, roll, pull, and compress you.

How about some more tasty and modern Thai overlooking one of Bangkok’s most gorgeous landmarks, Wat Arun, the Temple of Dawn? One moment you’re on the busy, touristy streets outside the city’s most famous temples of Wat Pho, the next, you’re inside the elegant and air-conditioned Sala Rattanakosin Eatery and Bar (part of a cute boutique hotel, the Rattanakosin) being offered cool towels soaked in lemongrass ordering Thai-iced teas and flavorful Phanaeng curries.

We love a pool party. If you’re lucky enough to be in Bangkok during the last Saturday of the month, be sure to check out the SO Sofitel Bangkok’s vibing monthly pool party So Pool Party. Some months are certainly queerer than others, but the event always has a strong LGBT contingent.  A gorgeous infinity pool spills out into views of the wild sprawl of Bangkok and a lovely mix of locals, expats, backpackers, and business people splash about at one of Bangkok’s hippest and most queer-friendly hotels.

Although only 410 meters long, the street is said to have “one of the longest dreams in the world.” Here you’ll find true backpacker’s paradise. Cheap accomodations, an overabundance of Wifi cafes, tour planning offices, buses to Chiang Mai, street performances, cheap restaurants, grilled insect stands, as well as some of Bangkok’s more controversial sides, like the infamous ping pong shows. No matter what budget you’re on, it is worth a self-guided stroll and a stop for a late afternoon coffee or happy hour to exchange tales and tips with fellow travelers.

Here’s the thing–I’m a real sucker for a rooftop bar and I thought I’d seen them all. Moonbar at the Banyan Tree Hotel Bangkok absolutely knocked my socks off. Located 61 floors up, this hot spot is constantly in the top 10 of the world’s rooftop bars. The lofty heights, minimalist house music, and celebratory atmosphere are sure to make your experience dreamlike as you sip away and feel the thick Bangkok breeze.

You’ve been itching and scratching to go out,  here’s your chance. Check out GoGrrrls!, a “girl-love-girl” all female-DJ dance party that’s been igniting Bangkok since 2013. As in any big city, venues and dates rotate so keep up to date on the event’s Facebook page.

More mainstream Thai nightlife can be found at Silom Soi 2, a hub of queer bars that cater more specifically to men. “Soi” in Thai means “ally” and this one is filled to the brim with gay establishments. The most popular is DJ Station (and its nightly stripper show) but don’t be scared to explore beyond this hot spot–it’s always more exciting when you choose your own adventure. Looking for a little more of a local experience? Check out Fake Club or APP Arena, which both put on quite the show as well.

Nightlife goes late in Bangkok. Rise when you can, but when you do, make your way to The Museum of Contemporary Art Bangkok for five stories of  thought-provoking modern Thai art (with a few international artists on the fifth floor). The museum stands out among others for showcasing artwork that tackles and comments on many of the skeletons hidden in Thailand’s closet.

Bangkok’s Central Park. This whole weekend you’ve been hurtling through a vast concrete jungle of impossible skyscrapers, tight alleys, and bumping shows–now it’s time to take in a moment of respite at the 142-acre Lumpini Park with a self-guided stroll. Called by some the “Green Lung” of Bangkok, the park is a hotspot for joggers, birdwatchers, bikers, picnickers, swan boaters, and local flora and fauna–including massive water monitors who casually pop out of the pond to sunbathe.

Sunday night in Bangkok mean’s a stop in at Maggie Choo’s, a well-known jazz bar that hosts a popular gay night on Sundays. Located in the basement of the Novotel Bangkok Fenix Silom, this long standing party puts on a great weekly drag show that’s hosted by the host of Drag Race: Thailand Pangina Heals.

Billing itself as “Bangkok’s First Urban Design Hotel,” the SO Sofitel is one of the hippest hotels in the city and a constant draw for queer travelers looking for luxury and mingling. The hotel has 237 rooms decorated by the elements in four different layouts: Water, Air, Earth, and Metal. The property also hosts a gorgeous infinity pool, and many of the rooms look out onto the soothing expanse of Lumpini Park. Rooms from $208 USD and up.

This cute, Thai-owned boutique hotel is located right on the waters of the Chao Phraya and looks directly at Wat Arun, the Temple of Dawn. The hotel is the perfect option for those looking for a more intimate accommodation that doesn’t lack in luxury. Rooms from $140 USD and up.

One of the most aesthetically striking hostels in Bangkok, the Minimis Hostel is a great place to stay on a budget, without feeling like you’re on one. Beds starting from $22 USD and up.