What’s that smell? Is it the sea? Or is it the freshly roasted beans filling the air as the tattooed barista yanks the espresso lever? No-it’s not the spruce tips or the fern coils. It’s the smell of weed legalized four years dancing with hoppy I.P.A.s outside the local microbrew. Whatever it is, they don’t make a candle of it, so for god sakes, savor it.

This is the city by the sound. The Emerald City. The crown jewel of the Pacific Northwest. Don’t fret, it is not only for Filson-wearing lumbersexuals or Arc’Teryx trail runners: Seattle is for grunge sentimentalists, rebels, and innovative entrepreneurs, but the metropolis is always mellowed by an undeniable West Coast nonchalance. Physical activity is popular among the region’s glacial stratovolcanoes and rugged waters, but there is refuge in the arts for those unimpressed by spruce stands. And at night, the party can go all night as Amazon-ians brush by drag kings in the city’s trendiest clubs.

Start the weekend with a plunge. Madrona Park on the western shores of Lake Washington brings you T-Docks, a dock in the shape of a “t” launching into the swimmable depths of the lake. Here the hipsters tan on the limited real estate of wood planks, slipping into the lake on warm afternoons. Wear a Speedo, wear a three-piece, but don’t tell me I didn’t tell you the lake was cold! 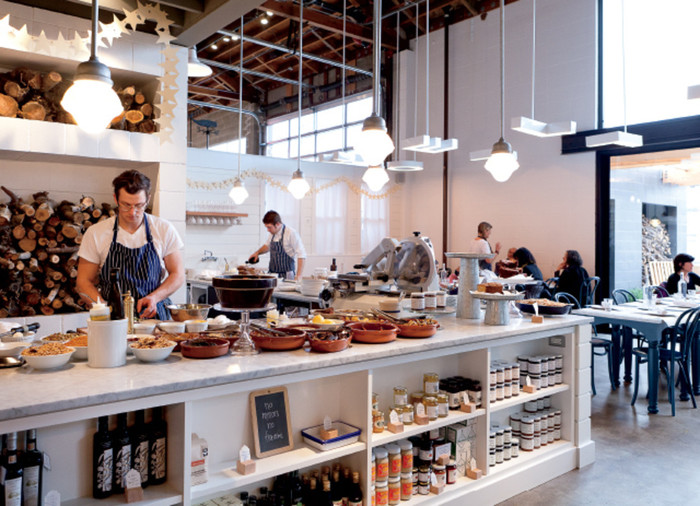 Everyone knows Renee Erickson is the new Julia Child. The award-winning chef of seafood brings Seattle a batch of restaurants with lovely nautical themes, but The Whale Wins in Fremont is her most whimsical. Pleasant turquoise accents compliment the floor-to-ceiling glass windows. Inside, foodies share small plates (like the famous harissa roasted carrots) and nom on entrees like the Hama Hama clams (expensive AF).

In the modern tradition of speakeasies that actually aren’t that secretive, Gin and Bathtub Co. loiters in a downtown alley off Blanchard street between Avenue 1 & 2. To find it, look for the wood door (or the long line if you show up past 10pm.) A cozy setting of dark woods and exposed brick are your backdrop and a wide selection of gin your focus. Sample the local Hedge Trimmer or Voyager distilleries, or sing sin with a crafted cocktail, like the Atticus Finch- a mix of gin, red vermouth, black walnut bitters, grapefruit juice, and the elusive Licor 43 (expensive AF). A hand-drawn check by the waitstaff is a wonderful ribbon to an intimate evening. 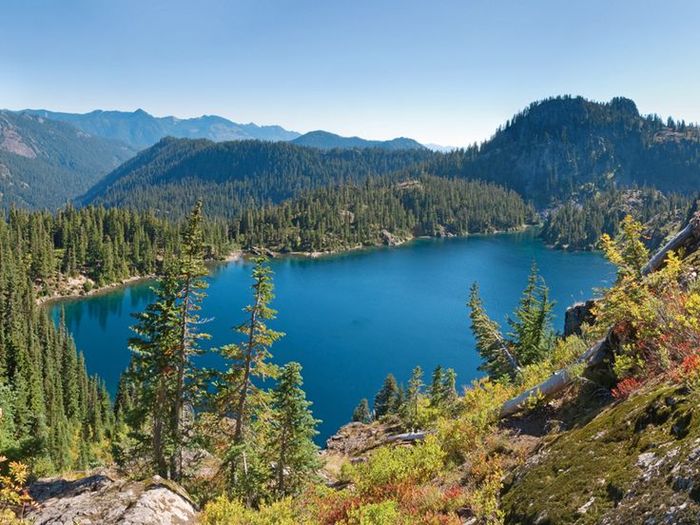 Rise and shine, sunshine. This morning we are hiking Squak Mountain State Park, just 19 miles from downtown Seattle (free AF). The lesser visited state park is one of the quickest escapes for a chance of solitude among the ancient forests of the Pacific Northwest. Here, sword ferns cover the stumps of old growth trees cut down long ago by loggers. A 3.3-mile trail snakes its way to the summit of Central Peak, a 2,028-foot mountain in the middle of the park. If the summit is too far, the remains of an eerie stone fireplace of a family’s historic cabin are a popular turnaround with a bench to sit and hydrate at.

Big glass windows and festive paper lanterns welcome you to Pablo y Pablo with one of the more creative brunch menus in Seattle. Located just ten minutes North of downtown, the restaurant zests up traditional brunch classics with Latin American inspired specialties. Diners rave about the collection of delicious breakfast tacos and mole spiced granola, but if you’re looking for sweets, try the challah french toast that comes with a hearty dollop of horchata whipped cream. The Oaxacan coffee is sublime and so is the boozy, blood orange margarita (reasonable AF).

The Burke Museum opened its doors in 1899 as the Washington State Museum. Now known as the Burke Museum of Natural History and Culture (affordable AF), the museum displays numerous exhibits near the University of Washington. Currently, the exhibit Pacific Voices displays a thorough look at first people’s culture, combining the past with identities of the present. View the stunning artwork of capes and colorful masks alongside studies documenting the fading Lushootseed language. Also be sure to check out the Bill Holm Center for special workshops in basketry and tool-making.

University Village offers lovely open-air shopping and restaurants near the museum. The area is wonderfully landscaped with colorful flora as you stroll between favorite local shops like Kiehl’s, Free People, and Marine Layer. Be sure to refresh with a Moscow Mule at Rachel’s Ginger Beer, only $7 during happy hour from 4-6pm. In the same neighborhood, Blue Owl Workshop has some of the best menswear in the city with an extensive jeans selection if you’re in the market for a fresh pair of denim, raw, Japanese, or otherwise. 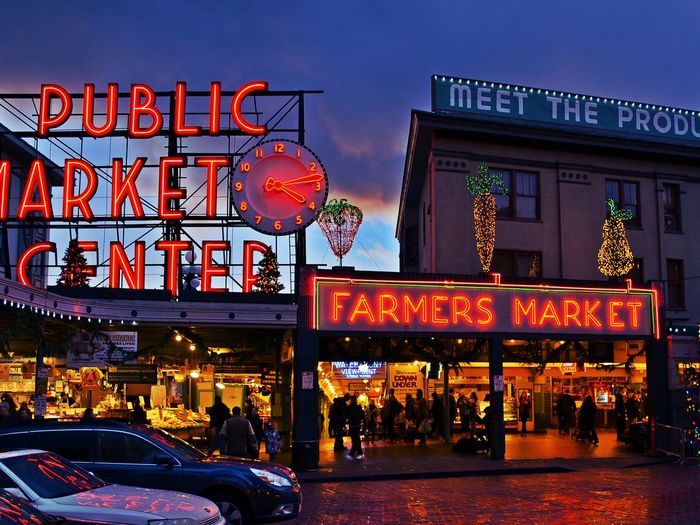 A stroll through Pike Place Market is an obligatory “how could you not?” while visiting Seattle. This is the market where giant Alaskan salmon are tossed to entertain by strong workers and hundreds of small businesses, craftspeople, and restaurants come together in a cultural mixing pot. The seven-days-a-week market is sprinkled with wonderful culinary delights that allow you to sample many small plates from different vendors, or to sit down for a full meal at one of the smaller restaurants. You can have anything from the “The Smokin’ Hot Bitch” (gravy, biscuits, jalapenos, and hot links) at Biscuit Bitch (reasonable AF) to a lovely fish of the day (expensive AF) overlooking the iconic neon market sign at Matt’s in the Market. If neither sound good, any international cuisine can be found by looking in the directory.

On the last Saturday of every month, Kremwerk and the Timbre Room Complex puts on an epic Drag King Show. It is one of the few shows like it anywhere in the world as the men put on lip syncs and dance numbers as wonderful caricatures of men from Spock to Yeezus. Doors open at 7pm and the show starts at 8pm. Kremwerk is one of Seattle’s hippest “queer-centric” nightclubs with drag shows, progressive techno DJs, and inclusive fetish nights. The complex is located downtown in an industrial basement. 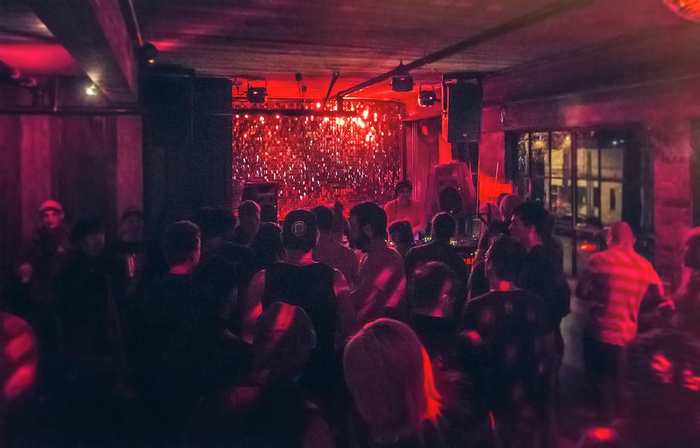 Not far in the Industrial District, Monkey Loft gives Seattle’s night owls late-night revelry until 4am. The upstairs patio can only be described as “vibes” and offers a great view of the city. One thing is certain, the DJs here know how to lead a crowd to morning.

It is time to try the esteemed coffee. Kaladi Brothers Cafe (a small chain from Alaska) finesses incredible pour overs. Try the Kaladi Special. The queer-friendly cafe also shares walls with Gay City, Seattle’s LGBTQ center. Be sure to inquire about the Gay City Arts performance schedules of performances and galleries, now in its fifth season. This year’s theme: Resistance. 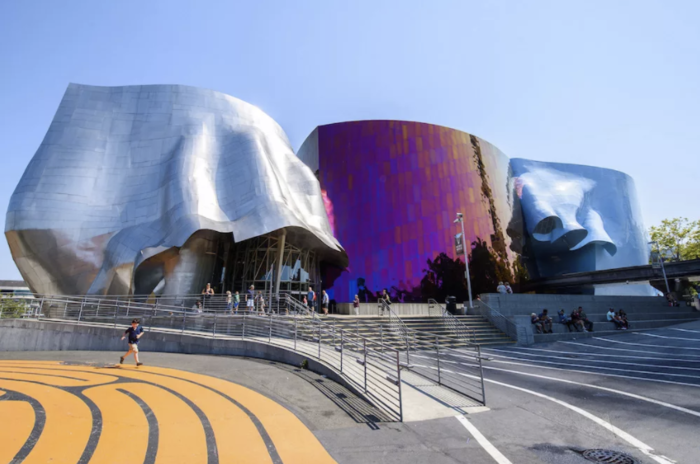 Arrive in eco-friendly style to The Museum of Pop Culture MoPOP (reasonable AF) by riding the Seattle Center Monorail from downtown at the Westlake Center at Fifth and Pine. The museum’s building was designed by eccentric architect Frank Gehry, who is well known for his Walt Disney Concert Hall in Los Angeles and Guggenheim Museum in Bilbao, Spain. While some architecture critics say the exterior resembles a pile of colorful metallic garbage, the interior hosts an interactive collection of permanent exhibitions like The Guitar Gallery and the wonderfully nerdy Science Fiction Hall of Fame. The museum also pays tribute to Seattle’s most influential rock musicians Jimi Hendrix and Nirvana.

Taking a ferry to Bainbridge Island (reasonable AF) gives visitors the opportunity to see the Seattle skyline from a new perspective as their boat chugs across the Sound to the quaint little island of bike paths, vineyards, and everlasting charm. During the warm summer months, rent a bike (affordable AF) for a self-guided day tour and circumnavigate the entire 35-mile island or cruise from cafe to craft shop before drifting the day away in the aisles of the Eagle Harbor Book Company store. The ferry ride back will offer great perspective.

Fancy Pants – Looking out from your room at The Edgewater will make you feel like Rose at the bow of the Titanic, feeling the freedom of the maritime air as Jack lifts you to fly. The hotel hovering over the pier offers large rooms, top-notch service, and unforgettable views. The tasteful nature-inspired decor emits the flora of the region and the Space Needle, Pike Place Market, and city aquarium are all within walking distance. Waterfront rooms from $215 and up.

Goldie Locks – The Ace may be Seattle’s favorite boutique hotel. It shyly hides in the hip neighborhood of Belltown in a gorgeous brick building. A glamping theme brings woolen blankets to the foot of beds and wonderful indoor plants to brighten the clean, minimalist walls. The hotel has standard rooms with shared bathrooms and deluxe rooms with their own bathrooms as well as a hearty breakfast. Rooms from $129 and up. 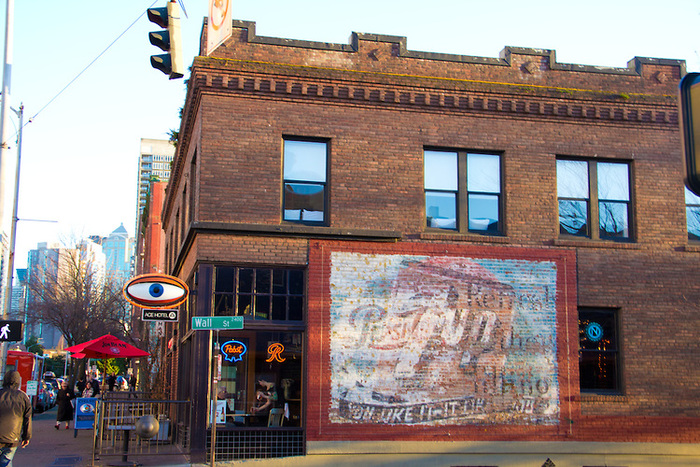 Backpackers – Hotel Hotel Hostel gives budget travelers a home away from home (complete with an in-house fire-oven pizza restaurant and bar) in Fremont, a lovely neighborhood a short bus ride away from downtown. The hostel offers dorm rooms and private rooms. Beds from $21 and up.