You’re in Norway’s second largest city, Bergen, and you’re surrounded by seven mountains, the country’s longest and deepest fjord, and a coastline whose waters are surprisingly moderate despite the city’s northern latitude.

You check into your hostel near the center of town, because, tbh, the cost of traveling in Norway is as high as your grade school teacher’s pants; not only is the exchange rate stiff, but simple excursions like a trip to the grocery store are damaging. You’re looking for an activity in town that is classically Bergen—one that is free of cost but rich in experience. 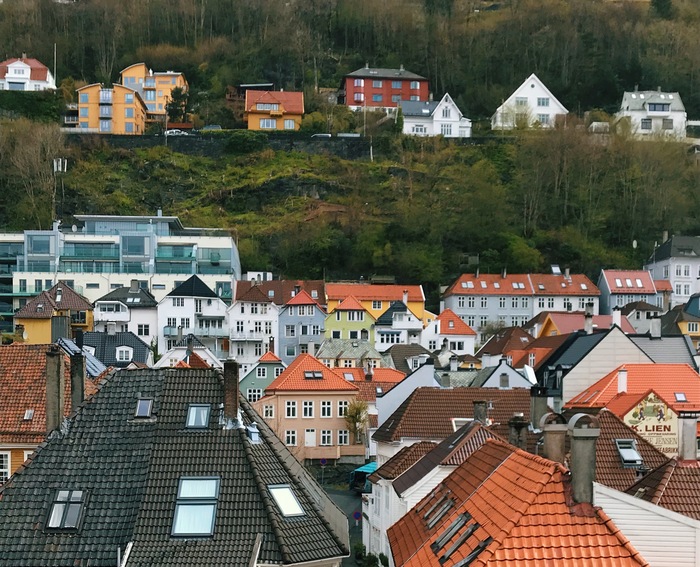 It’s 21:30 but because it’s spring, the light lingers. As you look out the 8-person dorm room window from the the fourth floor of the Marken Guesthouse, you can see the city’s tallest mountain, Ulriken, ornamented by a spiky television tower. You can trace the hiking route you will take the following day that schleps itself across the mossy, boggy alpine to the city’s other famous mountain, Fløyen. This route, called Vidden, is one of the most popular hikes for locals and visitors alike, with good reason, there are vistas, waterfalls, tarns, and cute little cabins hiding in the rock outcroppings.

There are two beds left in your hostel’s room, a top bunk and a bottom bunk, this is a cheap joke but also the beginning of a choose your own adventure and somehow after deciding, against all odds, you fall asleep in your creaky bunk bed despite the snorting and night terrors (in Portugese) of one of your seven roommates. In a lull, your marvel over the snowy vistas ahead of you on your first Norwegian hike. 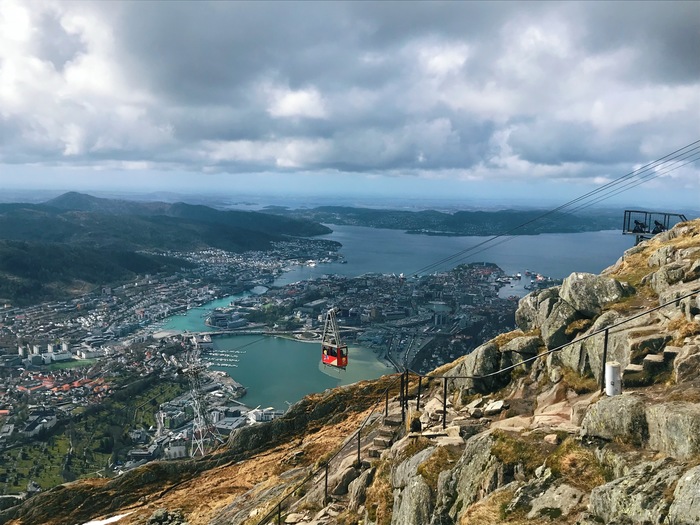 The morning is drizzly and grey and so the city’s brightest houses stick out like easter eggs in pastels of yellow, red, and key lime green. You notice them as you take the bus to the Montana station, a few kilometers southeast of the city’s center. On the way, there are no billboards— the city banned them years ago—and Visit Norway’s slogan “Powered By Nature” seems earnest. The only advertisements in Bergen are the flanks of its seven mountains and you were sold before you even arrived. You wouldn’t have made the trip all the way up here if you weren’t, right?

You alight from the bus, walk through more suburban neighborhoods roosted on the mountainside before you pick up the trail for Ulriken. There are many options but you decide to take the steepest. It is one of the most well-maintained trails you’ve ever walked in all your dearest adventures. There is a staircase made entirely of stone with erosion mitigation decorated on its side; a little creek tumbles down like a spa fountain.

At the top of Ulriken (2,110 feet) you mingle with a visiting Japanese family who took the cable car “Ulriksbanen”, grab a coffee from the restaurant, top off your water, and set off onto the Vidden trail that will shepherd you 15 kilometers (9 miles) across the golden plateau.

Since it’s spring, a decent amount of snow remains on the higher elevations clinging to the shoulders in thick drifts. In a few sections, the snowmass spills over the trail. Warmer days, rain, and the resulting runoff have already begun to morph the once frozen land of winter into ephemeral bogs, puddles, and mud pits and you are thankful you wore your seasoned shoes and thickest wool socks.

On the upper reaches of the hike there are 360 degree views of all of Bergen’s seven famous mountains— Fløyen, Løvstakken, Damsgårdsfjellet, Lyderhorn, Rundemanen, and Sandviksfjellet, and you are becoming quite fond of these words you’re having a difficult time pronouncing. Because the rain has cleared, you can see the far away Folgefonna Glacier. Vidden’s well marled single track path seamingly winds through the air and turns it’s ordinary trekkers like yourself into mythical skywalkers. 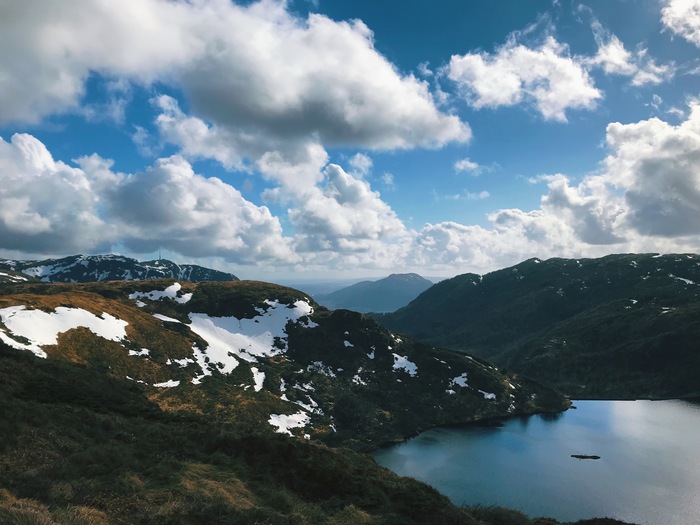 A little beyond halfway, you begin to thread between Øvre Jordalsvann Lake and the lofty waterfall cascading into Tarlebøvannet Lake. Plop, plop, plop—a swift runner and her boyfriend overtake you from behind and splash you with mud as they zip by on what appears to be a casual afternoon run they were able to squeeze in after a full day of work.

Not long after the trail runners, you collide with two backpackers heading to one of the many huts speckled across the golden plateau who tell you they are out for a two night trip. This is the beauty of Bergen you discern—the modern city of ~400,000, with delicious restaurants, craft beer culture, upscale boutiques, and a lone (but hopping) queer bar called Fincken that attracts a mixed crowd for serious dancing— also has wilderness and adventure accessible directly from town.

You being to imagine a life where you don’t even need a car to live in a city and outdoor oriented life. Perhaps you imagine spending the evening in one of those little red cabins (with that white trim) on the plateau with your friends, perhaps, even a lover. Them in their long johns, helping you make a fire in the stove as you sip on some potent akevitt. You imagine a little Bergen life where you can have it all. 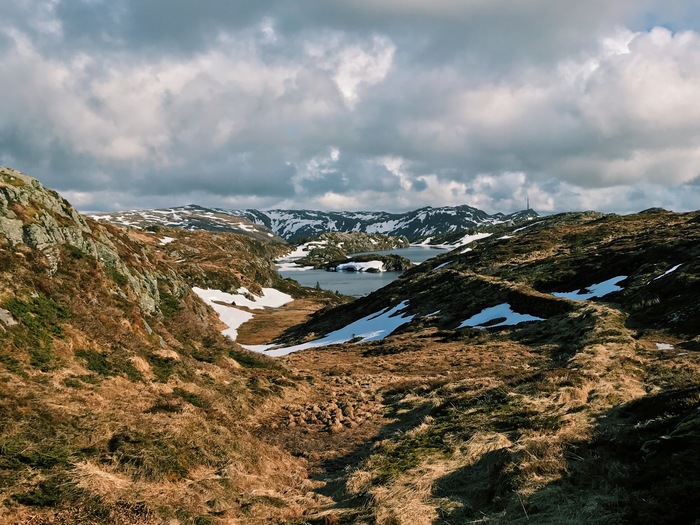 When you summit Rundemanen (1,864) you can feel the long hike coming to an end, your knees have grown sore and more and more runners and mountain bikers take advantage of the late day sun, getting in their outdoor fix after a long and cold winter. You are forlorn to be leaving such grandiosity but excited for a hot shower, a meal, and a light Norwegian lager.

The ending point of Fløyen is the much busier endpoint of the Vidden trek and looks gloriously over the town, coastline, and far away islands. Here, Fløyen cradles Bergen’s greatest park where mellow trails weave through a dense forest with playgrounds decorated with trolls spook little Norwegians and picnic tables welcome picnics in warmer months. 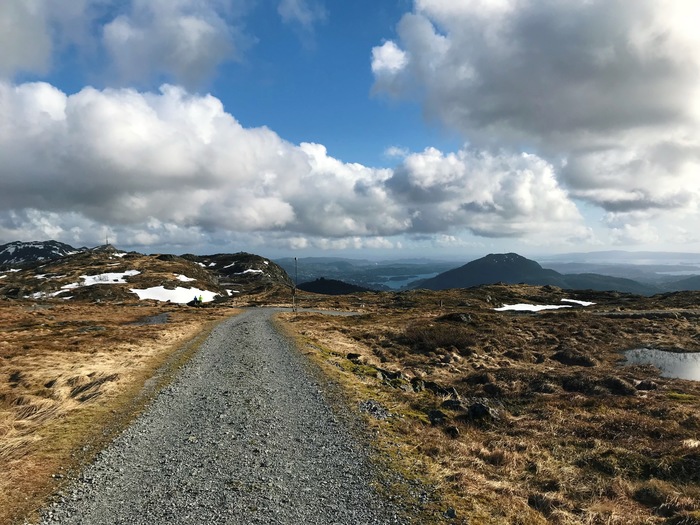 At the end of the hike, your quads, hamstrings, and glutes are especially tired after such a trying traverse of muddy, challenging terrain, and your shorts and back are crusty with mud after taking a few nasty wipeouts on the slickest sections of the trek’s steepest terrain. Vidden: 1 Your Muddy, Messy Ass Self: 0. You are thankful for the 50 NOK ($6) funicular ride direct to the city center and that night you may dream of the possibilities the great backcountry of Norway has to offer beyond Bergen.