It’s always been a dream of mine to re-create every moment of Romy and Michele’s High School Reunion, because it’s the simple things in life that truly matter. The iconic movie has provided us all with so many quotable phrases, cementing its importance within pop culture. I woke up one morning to an overly anxious boyfriend who didn’t want to spend his day off sitting around the house, and he looked to me to come up with some brilliant last minute plan, because apparently, that’s what I do. Day trips for us have become sort of a norm, as we don’t mind spending time in the car and are typically both eager to explore places we haven’t been to or spent much time in.

Since we were in Phoenix, we had lots of options for day trips, but today was the day we would finally make it to Tucson. Living in downtown, we drive past the 10 freeway every single day, and the massive overhead signs before entering the onramps read “Los Angeles 10W” and “Tucson 10E.” We had taken the 10 towards L.A. countless times but we had never gone outside of the Phoenix Metro area heading East, until today. As he quickly Googled things to see and do in Tucson, I pulled up the famous clip from the movie where the two friends hop in their borrowed Jaguar XJ-S and zoom off to Tucson. Within minutes, we were in the car, with the sunroof open (it was the closest we could come to a convertible), on our way to Tucson.

The journey to Tucson from Phoenix is relatively simple: You get on the 10 freeway and drive East for about two hours until you reach the city. Between the two cities is a whole lot of nothing, reminiscent of portions of the drive from Los Angeles to Las Vegas. As the city appeared in the distance, though, I was genuinely shocked at how big it appeared. Somehow, within the span of a decade since I had last been there, the city had transformed. Driving into downtown Tucson, we found a parking spot and ventured off to see what we could find. We had about 6 hours in total before turning around and heading back to Phoenix, so the next time you are looking for a quick day trip to Tucson, here are three must-not-miss experiences that will give you a good taste of what Tucson has to offer. 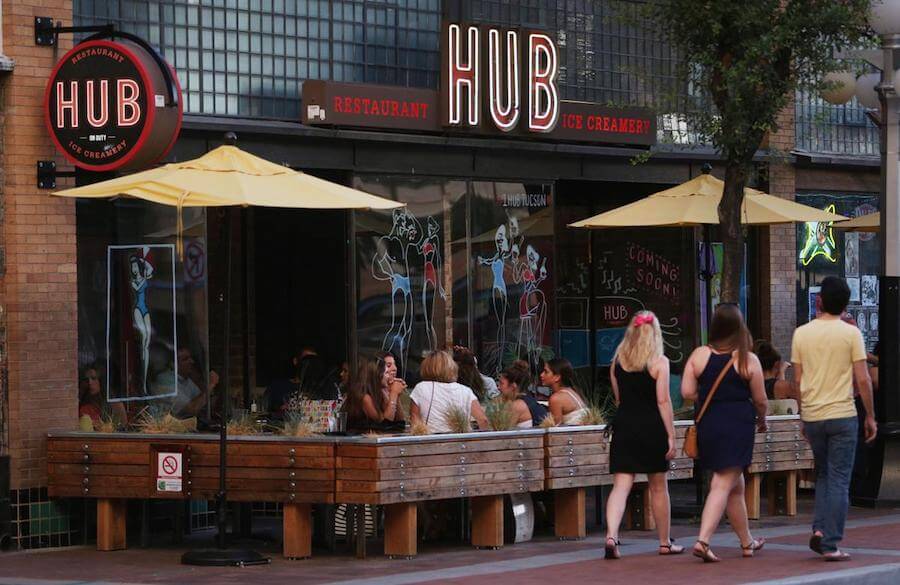 After that long stretch of nothingness before arriving to the city, you will be famished. Head to historic Congress Street in the center of downtown Tucson, find a parking spot, and wander your way around until you find yourself at HUB Restaurant. The restaurant is located in the city’s fastest growing and most exciting area, and there’s tons of street parking available. If for some reason you find yourself parking further away, no worries, the Sunlink Streetcar passes right past the front doors of HUB.

I’d suggest starting off with a cocktail, possibly the Tucson Tea, made with vodka, tequila, watermelon liquor, black tea, HUB hibiscus syrup and citrus. Or go for the Old Pueblo, made with local whiskey, orange peel, sugar, HUB brandy-soaked cherries and orange bitters. Just remember this is a day trip so drink responsibly. For food, the Glory Curds — Wisconsin cheddar curds flash-crisped with sriracha ketchup — are heavenly, as are the cornmeal and ancho chili dusted calamari. For mains, the Airline Chicken, a roasted airline breast served with fingerling potatoes, sauteed brussels sprouts, bacon bits, bourbon cream sauce, leeks and watercress is pretty tasty. But you guys, save room for the Mac & Cheese. Your options include a classic mac, bacon, chicken or lobster, with the latter being the obvious favorite. If there’s room for ice cream, they are known for their unique flavors like Mexican Wedding Cookie, Guava Tamarindo Chamoy, Strawberry Tres Leches Cake and even Vegan Chocolate. 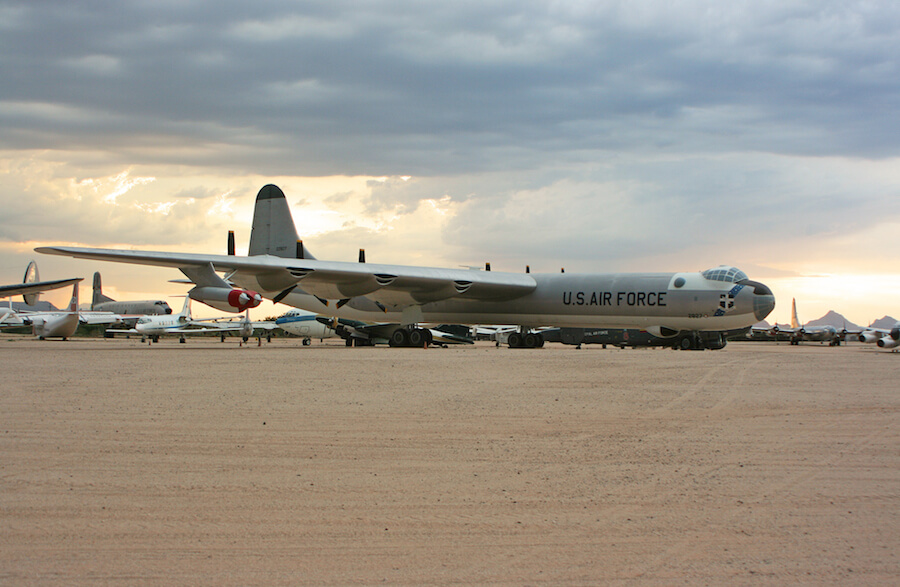 I grew up in Southern California, next to (a now defunct) Marine base, and my parents would always take me to the air shows. What kid wasn’t obsessed with airplanes? For aviation geeks, though, the Pima Air & Space Museum is like finding the treasure at the end of the rainbow. The museum is filled with aircraft of all types from all different eras of aviation. The hangers are filled with aircraft while the outside is a beautifully preserved airplane graveyard. The museum is one of the largest non-government funded aviation museums in the world, featuring over 350 historical aircrafts, from a Wright Flyer to a 787-Dreamliner. Sitting on 80 acres, the museum opened its doors to the public in May of 1976, growing immensely to encompass six indoor exhibit hangers (three dedicated to WWII). Having that Dreamliner there is seriously exciting, and it was the first aircraft I ran to once I reached the outdoors portion of the museum. During my visit, I did see a 777 in a hanger just outside of the public access area, so I’m hoping that during my next visit, it will be ready for public viewing. 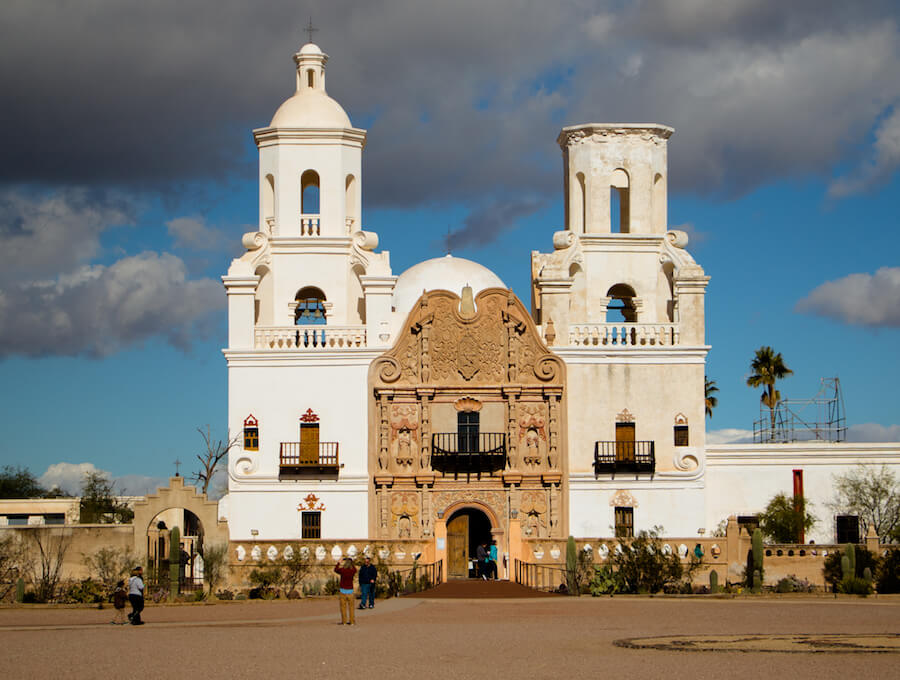 Chances are, when you Google image search Tucson, one of the first things you will see is this glorious church. A national historic landmark, San Xavier Mission was founded as a Catholic mission in 1692. Construction of the current church began in 1783 and was completed in 1797. The church is the oldest intact European structure in Arizona. The interior is filled with marvelous original statuary and mural paintings and allows visitors to step back in time and enter an authentic 18th Century space. There is no charge to visit the Mission, and some 200,000 visitors come each year from all over the world to view what is widely considered to be the finest example of Spanish Colonial architecture in the United States. Just keep in mind when visiting that the Mission was created to serve the needs of the local community, and although everyone is welcome to attend Masses, the church is first and foremost a church. I personally enjoy the outside more and could easily have spent all my time just observing the landscapes and color-changing sky around the beautiful church.