The stunning area was once the location for the 2000 film, The Beach, which featured a svelte, post-Titanic Leonardo DiCaprio in a paradise-gone-awry thriller. While the movie didn’t steal many hearts (it received a 20% on Rotten Tomatoes), its setting did. Alongside the James Bond movie The Man With the Golden Gun, also shot in the region, the film put the limestone karst islands and their gold sand beaches on the map as one of the hottest spots in southeast Asia. 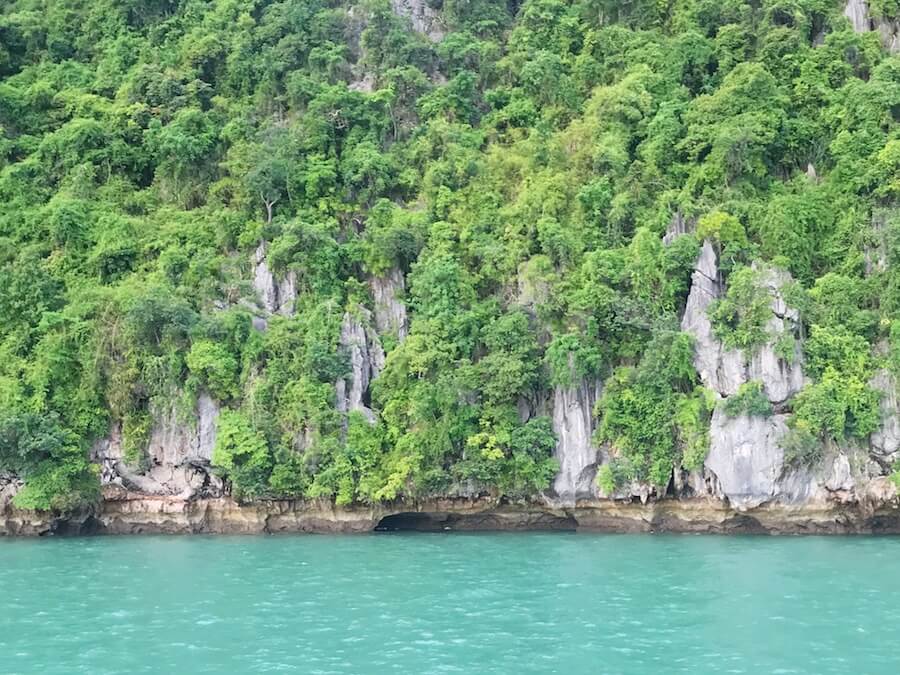 The island of Phuket, beyond its natural beauty, is also known notoriously as a party paradise where backpackers come from far and wide to let loose in the monthly Full Moon parties. While these parties draw a more heteronormative crowd (though they can at times and in certain pockets be quite queer-friendly), the island also hosts some of the best queer nightlife in Thailand outside of Bangkok.

It is in fact the only province to organize a Pride festival, a large colorful (and wild) week that takes place every April. Aside from the festival, the island hosts incredible drag cabaret shows in a collection of gay establishments that make the region incredibly popular for queer tourists.

Because of the many attractive factors drawing tourists to the Phuket region, many of the beaches and bays surrounding Phuket and Phi Phi now consequently bear an overabundance of activity. To say it kindly—they are being loved to death. In Maya Bay’s case, sometimes as many as 5,000 people a day are crammed onto the thin beach while 200 boats bob side by side in the warm, polluted (yet beautifully green) waters where nearly 80% of coral reefs have diminished.

When I visited Phuket over the summer, I was aware of Maya’s closure (the bay was originally temporarily closed for a few months over the summer before being closed indefinitely this fall) as well as the national park, Ao Phang Nga National Park, being placed on Fodor’s “no” list for 2018 to give the area a chance to recover. I felt guilty about visiting, concerned about my place as a tourist, another invasive number in the region’s mass of tourists, contributing pollution simply by my presence.

As a backpacker and hiker, I’ve always valued leave-no-trace principles— leaving places the same (or better) than I’ve found them. But as a travel writer, I wanted to see firsthand what drew so many tourists to the region. I wanted to witness the spectacle of mass tourism and decide if the must-do boat trip was even worth recommending if it rightfully deserved its place on the “no” list.

I decided to join despite my initial reservations, comforted that I would be seeing the region with John Gray’s Sea Canoes, a thirty-six-year-old company that has won recognitions like the Skal Ecotourism award and has been praised for its commitment to hiring only local guides. 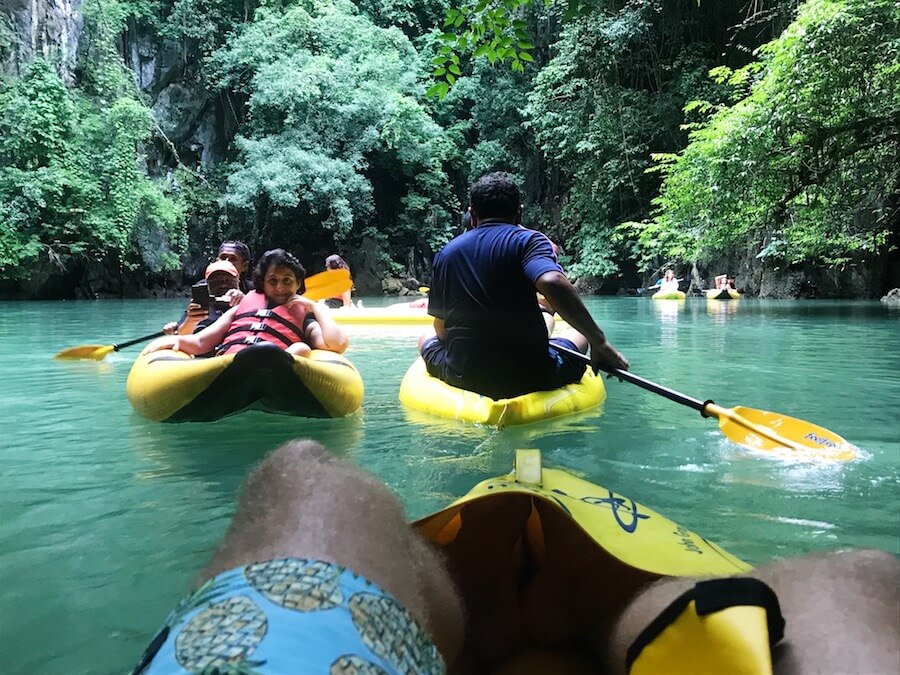 I was also partially persuaded after reading about the owner, John “Caveman” Gray, a wild, crunchy man who often cleaning up the sea by kayak. In one photo, he paddles an entire shattered plastic chair on the stern and a heavy bag of plastics on the bow.

At the end of Gray’s mission statement on his website, he says, “Never Give Up! Mother Nature cannot afford to lose the Battle for Planet Earth!”

Gray’s hippy-dippy, tree-hugging, and ocean-saving online presence gave me an assurance of the company’s commitment to the region, as well as the well being of the world at large, and so, I stepped onto the boat more open to the experience, something I wouldn’t normally partake in because of its large group numbers.

After embarking on a massive two-story boat from Phuket filled with inflatable kayaks, a handful of local guides, chefs, and around 30 guests tackled the day forging across the stunning Andaman Sea that was further dramatized by sheets of rain that the limestone karst formations loomed behind like bashful titans, until a mid-afternoon sun burnt off the rain and the day became perfectly blue.

Our first stop after crossing leagues of open water was to take a look at the famous James Bond Beach. Our guide talked over the microphone about why the company doesn’t stop at the beach or at Phi Phi Islands where many tour boats allow their guests to feed the local, wild monkeys on Monkey Beach. 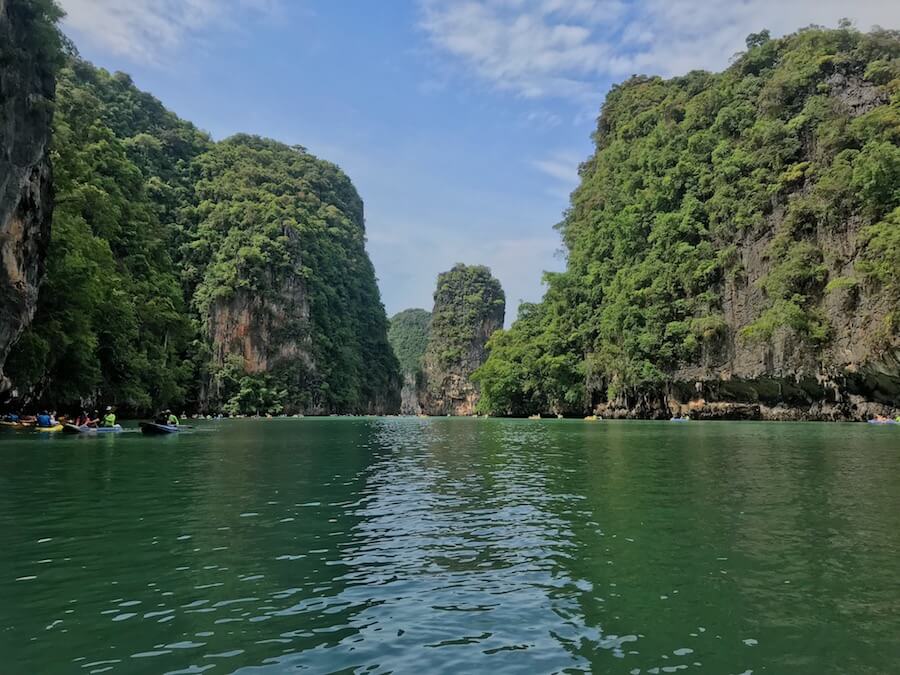 “We at John Gray Sea Canoe want to take you to places a little more remote,” he told us, “And we don’t want to overwhelm the environment or feed the beautiful animals.”

In front of us at the beautiful James Bond Beach, there must have been around 60 boats and perhaps several hundred tourists squished on the narrow little beach. There were stands set up on the beach selling coconuts and trinkets and drinks. Here, paradise was lost, and it was quite sad to see. There were so many people on the beach, they were almost only able to walk in a line as if they were in a crowded night club, or waiting in line to get into Coachella—going against the tide of bodies would prove difficult.

We forged on, making our way to places “a little more remote.” We came to a set of islands within the national park that surprisingly didn’t have any other boats—except for three other John Gray Sea Canoe tours each carrying the same amount of tourists and guides as our boat. The company certainly knew the islands and caves to explore where basic level tour operators didn’t trek, but by putting four boats in a location at the same time, the tour never seemed remote or particularly wild—but maybe that wasn’t the point.

We were soon assigned our kayak guides, hopped onto the inflatable boats, and were paddled beside the remarkable limestone formations where vines and trees full of tropical birds and buzzing insects screeched and sang. 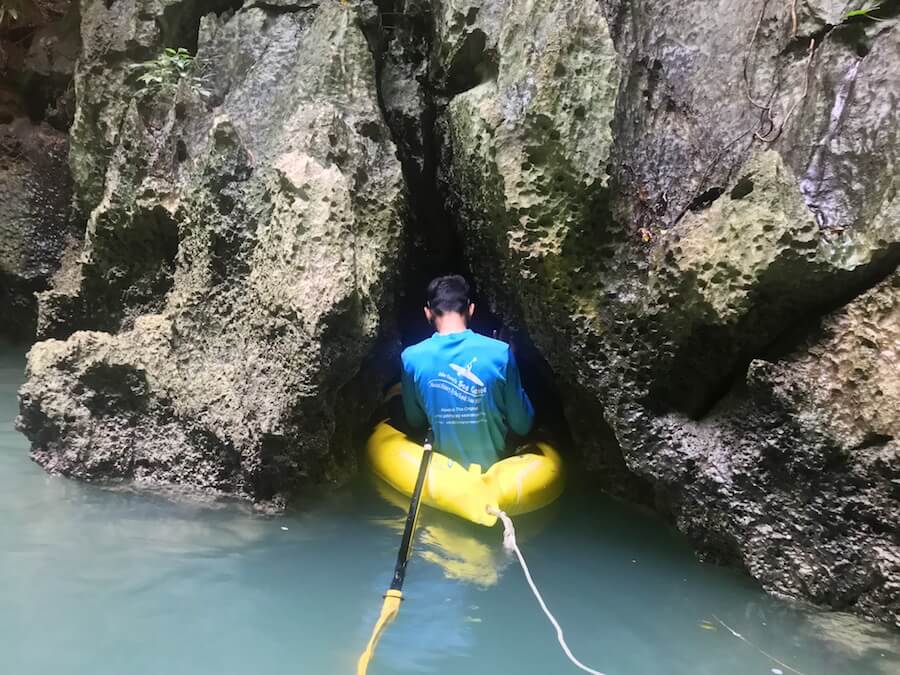 Gradually, we approached a small opening in the formation, a “sea cave” that was only possible to squeeze below in low tide. My guide paddled us to where the cave ceiling was so low that he had to guide our boat with his hands, pushing slowly against the walls as I laid on my back—the limestone only an inch from my nose—until we entered a beautiful circular inlet of mangroves. It was like being in the middle of a miniature jungle, though, in the middle of the sea. The walls towered hundreds of feet above us as plant life clung on dearly to their sides.

This environment was, to say the least—sensational. The experience was a truly unique adventure made accessible to anyone. A place that typically required caving skills, kayaking skills, a decent level of fitness, a high sense of adventure, as well as complex ocean navigation skills to reach was made accessible to nearly all by John Gray’s Sea Canoe. Over fifty kayaks at a time were paddled around the secluded sinkholes, making the remarkable experience no less stunning, but much busier, constantly reminding me of my presence as a tourist.

I’ve lived a lucky life of exploring beautiful landscapes, but seeing these karst formations with their unexpected sea caves was one of the most exotic and unforgettable experiences I’ve had—it was here in the ease of accessibility to adventure and exploration, coupled with a warm, tropical climate that I realized an obsession for the region. One did not have to be a a hardy outdoorsy person to enjoy the day. It was the perfect blend of excitement, scenery, and relaxation.

For the rest of the afternoon, we explored two other islands, had drinks on the boat, and got the chance to explore one karst formation without our guides, paddling around the warm waters in the late afternoon sun—my favorite part of the day—before eating a delicious Pad Thai dinner on our boat. 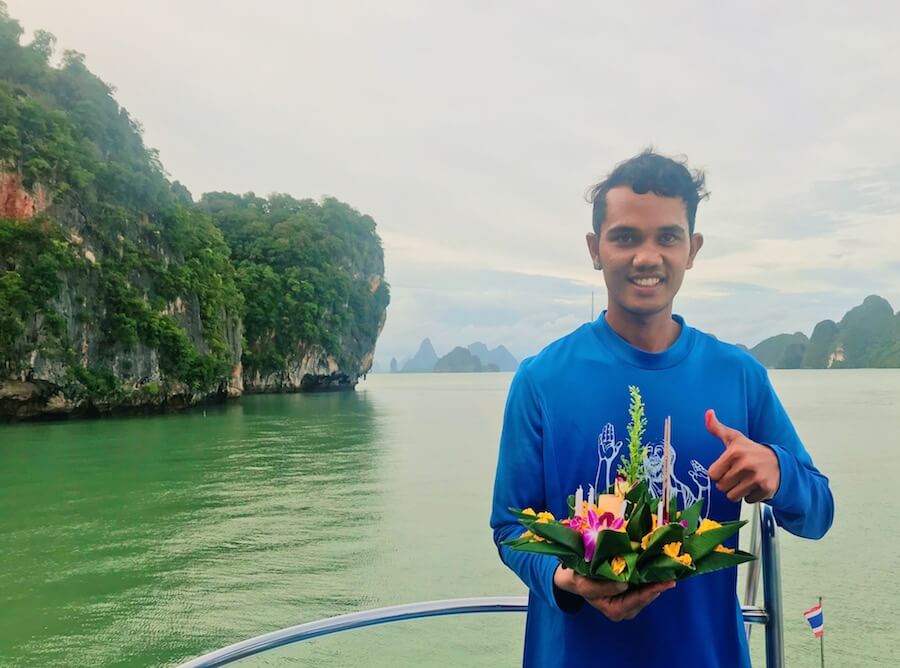 We ended the trip just after sunset, pushing floating lanterns (which we collected after use) of leaves, wood, and flowers that we made and lit with candles in the deepest, darkest and most crowded cave of the day as bioluminescent plankton were activated like fireflies with our every paddle stroke. Finally, we hopped on our main boat, before transferring to a speedboat and chugging back to the island of Phuket.

I commend the Thai government and parks service for closing Maya Bay indefinitely to give it a chance to recover, much like I commend the American Bureau of Land Management (in this instance) for managing truly delicate public lands, like Arizona’s Wave, with permits that only allow 20 visitors a day.

The challenge, I believe, in showcasing the world’s most incredible landscapes will always be one of great balance. Our national parks, all over the world, make stunning places accessible to nearly anyone, paving roads to quiet summits, wide trails through rough landscapes, and boat tours to beautiful bays.

Their very designation as a national park—synonymous in my opinion with “spectacular place with millions of visitors”— can ruin the very place we are attempting to protect, whether it be from traffic jammed roads in Yosemite Valley, packed beaches in Thailand,  eyesore developments over the Grand Canyon, or worse of all, by human waste.

I wrestle with this question daily as a travel writer—how do we get everyone to experience these incredible lands so they can begin to care about nature, climate change, and our world’s public lands, without overexposing the landscapes and consequently loving them to death? 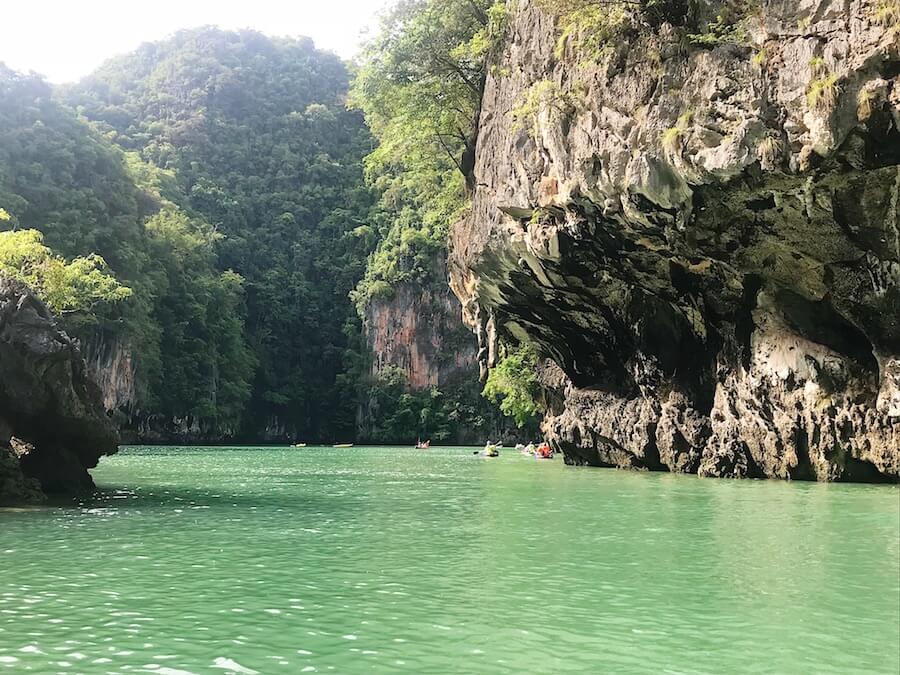 It is too easy as a writer to recommend other places near Phang Nga Bay in Thailand that are stunning and lesser visited, but wouldn’t that just help bring more boats and tours their way? What happens when the lesser visited becomes just as popular—will we one day have nothing less?

In the instance of Phang Nga Bay, I do recommend seeing it perhaps in an even more in depth way if you’re looking to avoid crowds, whether it be a multi-day tour with John Gray or other “eco-friendly” companies like Paddle Asia. But even though these trips will offer more solitude, they still expose the hard-to-get places to more humans, but at least in smaller, private groups and with higher leave-no-trace principles there is true respect for ecosystems.

As I would never say “don’t immerse yourself in the granite-walled vistas of the Yosemite Valley” or “don’t walk the rim of Bryce Canyon,” I could never tell someone to avoid the karst landscape of Phang Nga Bay. It is one of the places in the world that makes you feel deeply and wonderfully for our earth. It is the type of place that reinvigorates your own zest for life. The question is: how can we the people protect the earth from humanity so we never forget it, and for that matter, ourselves?