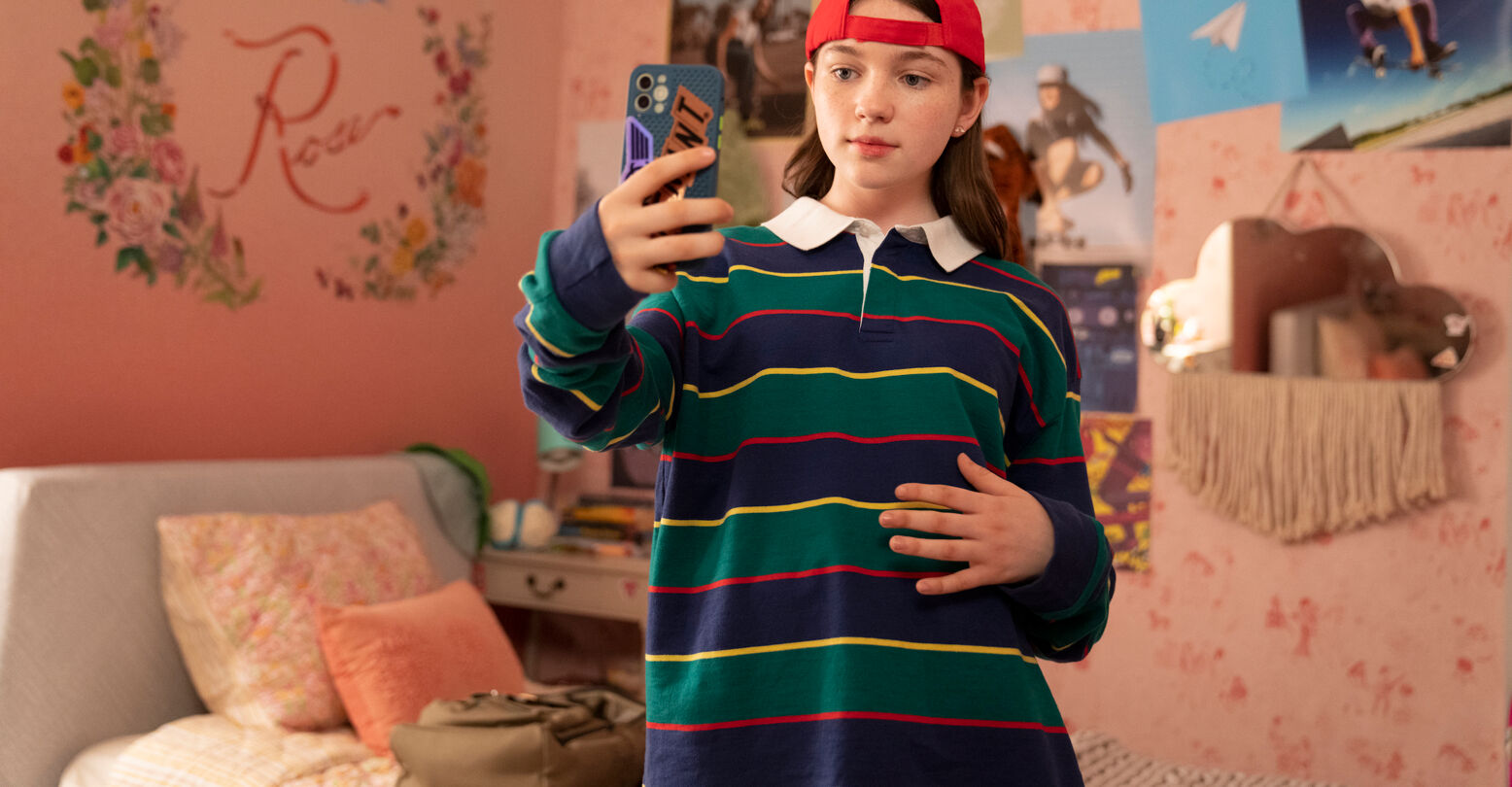 When Alexa Swinton was three years old, her mother, Inna, said she had an “acting spark.” From there, her passion for acting has since manifested into an impressive resume. At just 12 years old, Swinton, whose mother is also an actress and comedian, and whose “great aunt, I think” happens to be Tilda Swinton, has landed roles in movies like M. Night Shyamalan’s Old and on hit series like Showtime’s Billions.

In her latest role, on HBO Max’s Sex and the City revival And Just Like That, Swinton plays Rock, the nonbinary child of Charlotte York-Goldenblatt. Over the course of the first season, Rock changes their name, expresses their identity through fashion and through TikTok and finds joy in their personal aesthetic after cutting their hair short.

INTO chatted with Swinton about Rock, joining the cast of And Just Like That, and what her character has taught her about gender diversity.

Alexa Swinton: We had three scenes—two of which you’ve already seen, and one that’s not in the show anymore. But those two scenes were the scene in episode three. Where you were Rock [tells Charlotte] “I don’t feel like a girl”  And it was funny, because in the sides it said “make this comedic and light, not too serious,” which we actually only saw after we had [self-taped] the scenes. I was like ‘Oh shoot, we have to go back into it again, because we’re not making it comedic. It was kind of a dramatic scene. The second scene was more comedic—it was the one where it’s a rap and they’re ‘I changed my name.’ [Rock] was not the name at the time, but I still had to do the rap. And pretty darn well if I say so myself. I think 30% of the reason I got the part was because I did a pretty awesome rap.

Were your parents fans of the original Sex and the City?

My dad doesn’t say that he’s watched it, but he does know the names of all the characters, where they lived, and what type of character they were, so he’s definitely watched it. And my mom was actually once on the show.

What was it like working with Kristin Davis as your TV mom?

Kristin was really great to work with. It was pretty much a family connection almost instantaneously. I just loved her from the moment I met her and it made it easier to work on the role because she’s just such a warm person with such great energy. It makes it easy to play her child when you just like the person.

Rock and Che don’t really appear in any scenes together, but did you have the chance to meet Sara Ramirez who is non-binary in real life?

I did get a chance to meet them. I’ve been a really big fan of theirs on “Grey’s Anatomy,” so it was really cool to meet them. The thing about them is that they’re just such a cool person. The way they walk, their outfits, their hair and everything—-they’re just so cool. And I think they inspired me to make Rock a little bit more cool.

At the end of the sixth episode, we see Charlotte finally lets Rock cut their hair short. Did you actually have to cut your hair for this?

I did. It’s obviously a pretty big deal for an actor to cut their hair for anything. And so for me, it was really important that the story was authentic as it was for [creator Michael Patrick King], Kristin Davis, and everyone working on the show. They were definitely okay with me wearing a wig, but my mom and I didn’t want it to feel like it was a farce…I had a lot of discussions with MPK on the haircut we could do. My inspiration for this haircut specifically came from TikTok, where a lot of people that are gender non-conforming have haircuts like [Rock’s]. And I wanted to be as authentic as possible for [gender non-conforming people].

“Rock’s entire arc just resonated with me. Some people don’t have quite as easy a time being themselves.”

Is it awkward watching the show with your parents?

We skip over some parts in the show. But we were at the table read for the first episode, and we didn’t fully read the first episode to the very end, and I kind of skimmed over [a sex scene]. We kind of forgot there was a scene like that. It was a little bit more graphic [at the read] than it was on the final product of the show.

What would you say you and Rock have in common?

We’re both Gen-Z. We spend a lot of time on TikTok, which isn’t good. I also love skateboarding and practice as well. I actually got back into it because of Rock. I previously got into it, Because on Billions I needed to skateboard for a scene, and then I fractured my back and I kind of fell out of skateboarding. And then I got back into it because of Rock. I also love gaming, like Rock. Sims 4 has basically carried my entire quarantine. My screen time is probably, like, five hours a day because of it.

What has playing Rock taught you about gender diversity?

I’ve learned a lot from the writers’ perspective of character development. I’d love to write screenplays and television at some point, and I think I learned a lot about writing character development. I also learned that it’s okay to be yourself. I knew that before, but playing a character who was going through this experience, their entire arc just resonated with me that some people don’t have quite as easy a time being themselves. Rock had a fairly good time with their parents, but there are some people who don’t. To play a character who is 12 years old might reach out to some children who are watching and be like ‘I can tell my parents’ or ‘I can have a conversation with them’ And for the parents, [Rock] might make them feel like they can talk to their children who are feeling these things and make them more open for conversations.♦