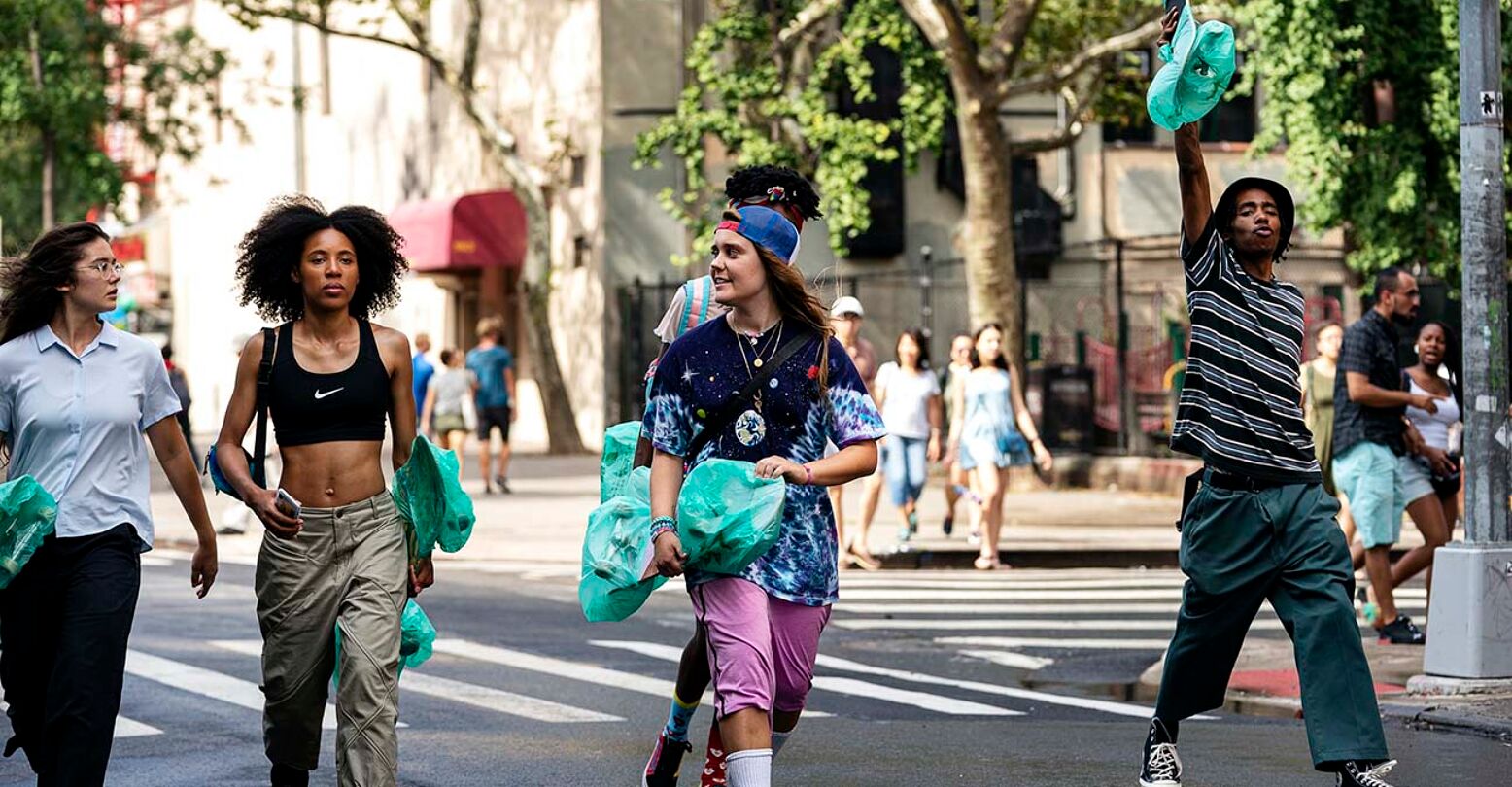 As a risk-averse, 50-something person, I’ve never been on a skateboard and probably never will be (in spite of quite a few women and nonbinary people who seem to have taken up skating during the pandemic.) But I can’t help feeling, at least momentarily, that I should maybe try after watching Betty,  the HBO series about young women who skate.

The show premiered last spring and started its second season on June 11. The new season’s first episode can be watched on YouTube for free, and acts as a kind of informal prequel to writer-director Crystal Moselle’s acclaimed 2018 film Skate Kitchen. Moselle also directs all of the TV episodes, and the ensemble cast skate through the streets together with the wind and sun in their hair, looking like a team of superheroes on a poster, if superheroes were a group of distinctively styled, young, mostly BIWOC (two of whom are queer) in New York City.

The same women who starred in the film play the main characters, and all of them are skaters and friends in real life as well as members of Skate Kitchen, the real-life New York women’s skating group. They also serve as consultants on the show. Rachelle Vinberg, who plays Camille, even has a writing credit on one of the new season’s episodes.

The first season (shot, like the second, on location) captured the boundless, pre-pandemic freedom of the streets and other places young women hang out held for them, like the bodega where the irritated clerk is on the verge of asking them to leave, and the block party where one woman confronts another who talked shit (that turns out to be true!) about her best guy friend.

These young women—some of whom are essential workers and most of whom are not white—seem somewhat cut off from, and jokey about, the pandemic.

Because the main characters are literally in the streets, season two of Betty is one of the few current TV shows that actually acknowledges the pandemic. All the characters wear face masks (though sometimes just around their necks) and Indigo (Ajani Russell) quits her job as a grocery clerk after a customer refuses to wear a mask (Indigo chucks a loaf of bread at the woman’s head.) But these young women—some of whom are essential workers and most of whom are not white—seem weirdly cut off from, and jokey about, the pandemic. They also don’t seem to have known anyone who has gotten seriously ill or died, which is unlikely in a city where nearly 1 in 5 people has had COVID, with a higher mortality rate for POC.

One of the great joys of the first season was how refreshingly irresponsible the main characters were (a quality that is often part of the charm of young male protagonists, but young, non-villainous women in movies and on TV are rarely allowed to have.) But throwing a huge, illicit Halloween party in a warehouse squat (as the characters do this season) hits differently when a pandemic is in full swing, no matter how much we enjoy seeing someone dressed as Tina Turner skate like a pro.

One of the best things about both the film and Season One were the part where the women just get to hang out and shoot the shit together.

“Where are your girls,” asks the forgettable male love interest, Sylvester (Andrew Darnell) of Janay (Dede Lovelace) this season. The same could be asked of many of the new episodes, which often feature the main ensemble separate from one another, when one of the best things about both the film and Season One were the part where the women just get to hang out and shoot the shit together. Camille has an equally bland male skater she spends too much of Season Two alone with, when last year she seemed to accept that her friendships with the male skaters were not as rewarding as those she had with the women.

Camille isn’t the only character who seems to be going backward: Last season, hilarious, long-haired, butch stoner, Kirt (Nina Moran) said after a mushroom-fuelled epiphany, “I want to stop hating the patriarchy and start helping the matriarchy.” But frustratingly, Kirt, who has a broken leg in the first part of this season (Betty and Skate Kitchen have never been shy about showing how much the women fall and get injured when they skate) spends much of her time as a sex and relationship guru for the skater guys then goes with one of their girlfriends, Shelby (Isabel Palma) on a “quest”.

That storyline, along with the largely non-judgemental one about Indigo’s foray into sex work (when she brings Camille along on a sugar daddy “date” they have a moment that will make audiences laugh long and hard) shows that even though the most recent episodes of Betty aren’t as good as last year’s, it remains a valuable, unique show–and includes a good amount of queer sex, plus a detailed G-spot tutorial! Moselle previously directed documentaries and Betty, by using its actors’ experiences and perspectives gives us a series better than so-called “reality” shows: it makes us believe in these women–no matter how many dull men get in the way. ♦