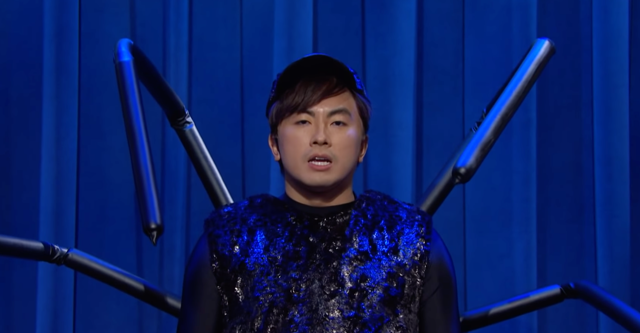 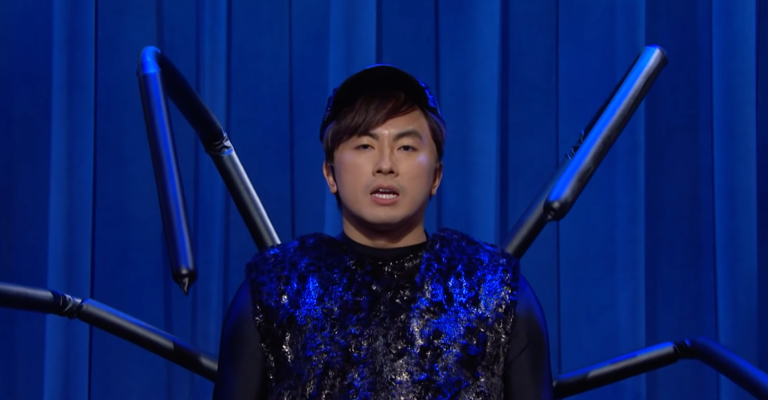 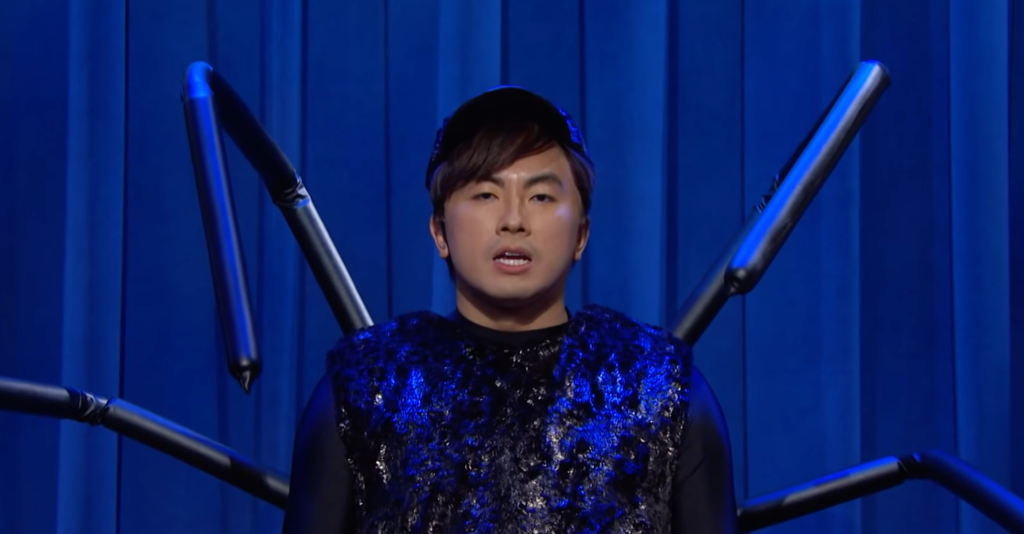 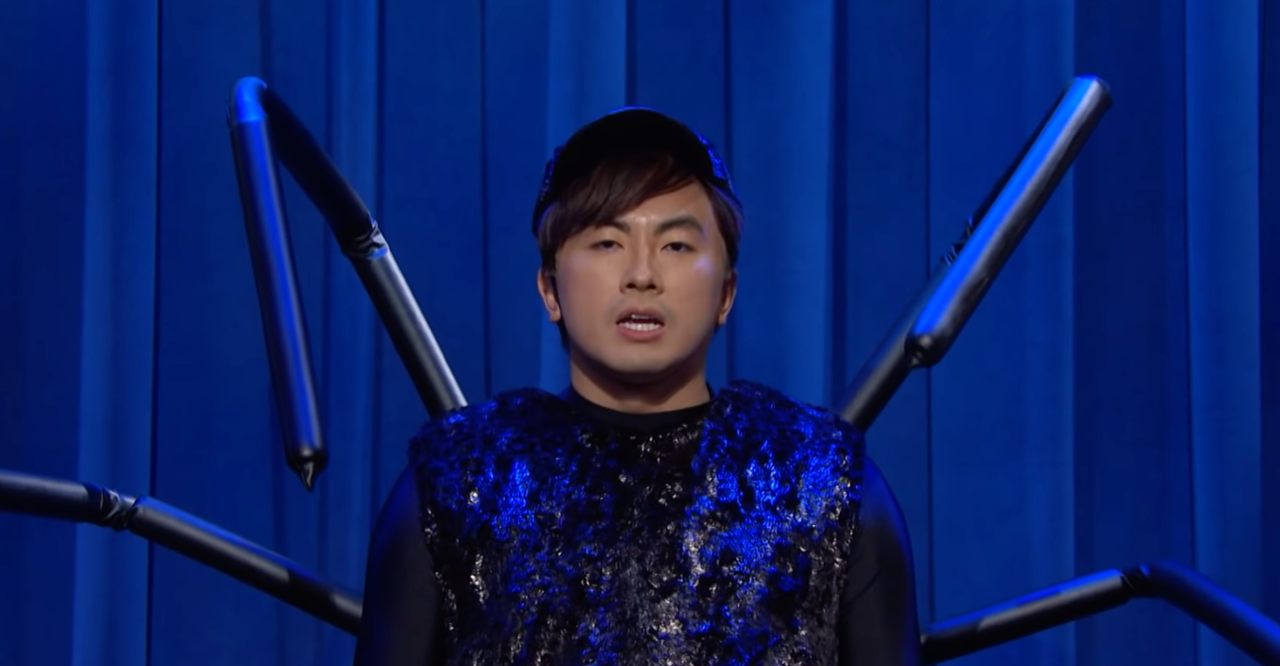 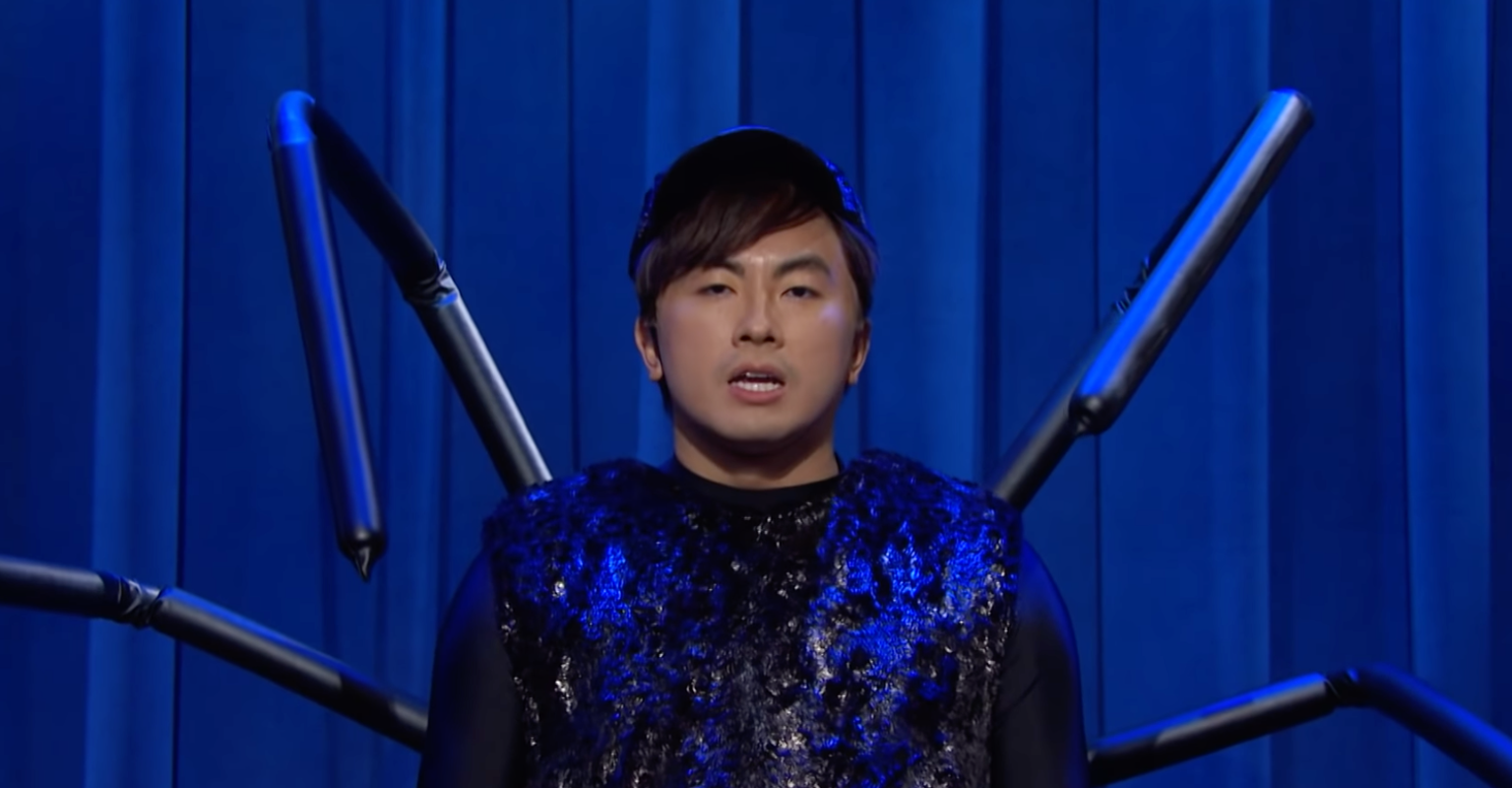 Comedian Bowen Yang first joined Saturday Night Live’s 44th season as a writer. Too funny to be kept behind the scenes, he became the first Asian-American actor to ever join the on-air cast as a series regular just one season later. With SNL just beginning its 47th round on the air, Yang’s unabashedly queer performances this past weekend (Oct. 16) reached hilarious new heights to match the enormous energies of Oscar winner Rami Malek and musical guest Young Thug.

After being propelled into stardom, Yang appears this year in SNL’s third episode with the star power of a veteran cast member. Seemingly having settled into a groove, he pulls off two character performances in one night: Russell the seventh grade Daddy Long Legs enthusiast and the other a proud, gay oompa loopa on strike. Both of which absolutely stole the show— catchphrases, outfits, and all.

The “Bug Assembly” sketch begins and immediately, there is Yang clad in a sparkly get-up and matching hat; eight flailing legs bring the arachnid costume together. Rami Malek, Andrew Dismukes, and Sarah Sherman don different insect-inspired costumes, and together the castmates star in the familiar setting of a packed auditorium. Intent on more than merely educating his middle school peers, Russell the Daddy Long Legs goes for the entertainment factor.

When it’s Rusell’s turn to present, Yang introduces his character drawing out each syllable with a frivolously flamboyant tone, “And I’m Daddy Long Legs.” Club music bumps out of the speaker, Yang dips his chin, and begins dancing in a way that can only be described as a serve—at one point, he even vogues.

In the interest of presenting facts about his beloved spider, Russell prepares to teach the auditorium audience what exactly Daddy Long Legs eat. Yang’s castmates play their parts perfectly, building anticipation for Russell, and when the spotlight comes back around to Daddy Long Legs, the comedic timing is right on queue,” And What does Daddy Long Legs eat?” Yang sets up the joke for a perfect delivery, “Boys. Boys. Boys.”

Teacher Kenan Thompson attempts to redirect Russell’s excitement, “Russell?” he inquires authoritatively. Keeping a stone-cold serious exterior, Yang inserts a momentary and dramatic pause with each word as he has his character insist: “Call Me. Daddy.”

Again an authority figure attempts to reign in Russell to present actual scientific information; and of course, Yang hits back even harder with a hilarious list of Daddy Long Legs facts: “I’m Hot. I walk Into the Party. I am respected. No more questions.” Upon shutting down the teachers, Yang dips back into the beginning of a death drop but stops short, claiming, “I got scared. I’ve only done it once. I didn’t want my ass to split open in front of the judges.”

Turns out one of Russell’s two gay dads is a Bravo executive and the other is a Republican. So when asked how Daddy Long Legs traps its prey, Russell reports, “I slam my credit card down and say: ‘Daddy’s got it.’”

Alongside presenting the night’s fresh take on Daddy as a term of queer endearment, Yang also plays a proud, gay Oompa Loompa on Colin Jost’s Weekend Update. Yang, powdered in the classic orange makeup and topped off with a green wig, has much to say about the viral photos released of his cinematic employer, Timothee Chamelet aka the young Willy Wonka, more recently recognized across the Internet as Twonka: the Twink Wonka.

Yang takes a skit mocking the upcoming Charlie and the Chocolate Factory prequel Wonka to all different levels. Having come out himself in real life, he portrays the experience of being outed on national television as a striking Oompa Loompa. Jost’s introduction and accidental outing of Yang itself is hilarious with the titular phrase, “proud, gay oompa loompa.”

Seemingly shocked but willing to continue with the strike, Yang reads from what appears to be a pre-written statement,““This twink Wonka, or Twonka, may look as yummy as lickable wallpaper, but make no mistake, he is…” Suddenly, Yang’s character ditches his script, “You know what? Actually, Colin, you just did me a huge favor, because now I can be honest – about everything!”

Liberated as a proud and out gay Oompa Loompa, Yang tells the truth about Wonka’s labor practices: and sure enough, Wonka runs his business in a strikingly similar manner to today’s major oligopolies: “Point blank, the man doesn’t know how to make chocolate! OK? He doesn’t, he’s an ideas man who’s never touched a machine, he just tumbles into the inventing room and says something like, ‘Oh what about a gumdrop that makes children dream silly dreams?’ and it’s like, ‘Yeah b***h, what about it?’

Mirroring unions and workers all over the United States, the striking Oompa Loompa voices his frustrations as he should, ​​“Meanwhile we’re up all night rehearsing the little song and dance we do when a child dies! The whole thing is sick!”

Basically, Bowen Yang killed it as a gay comedian busting out queer jokes that weren’t at his own expense; and given his track record, that’s exactly what he’s going to continue to do.