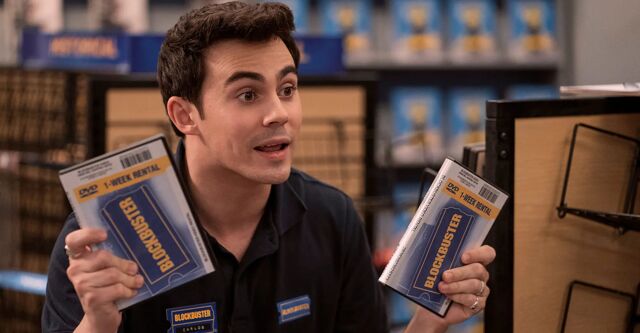 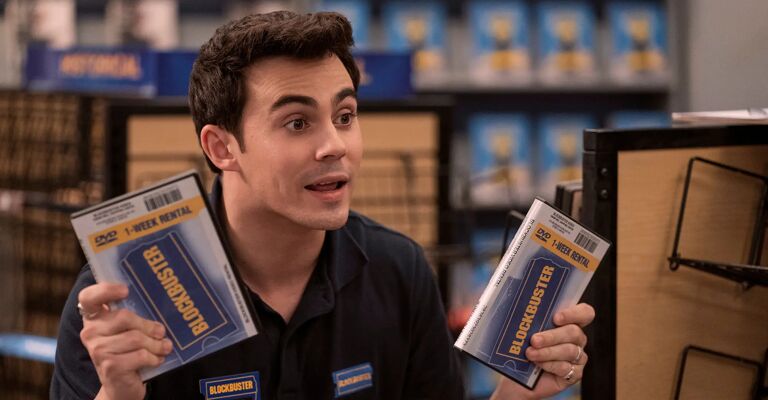 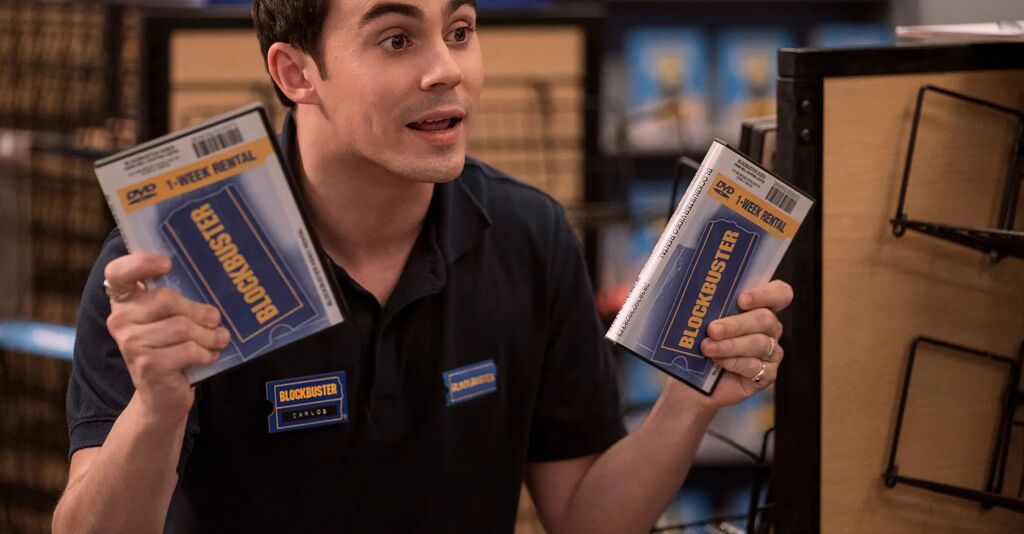 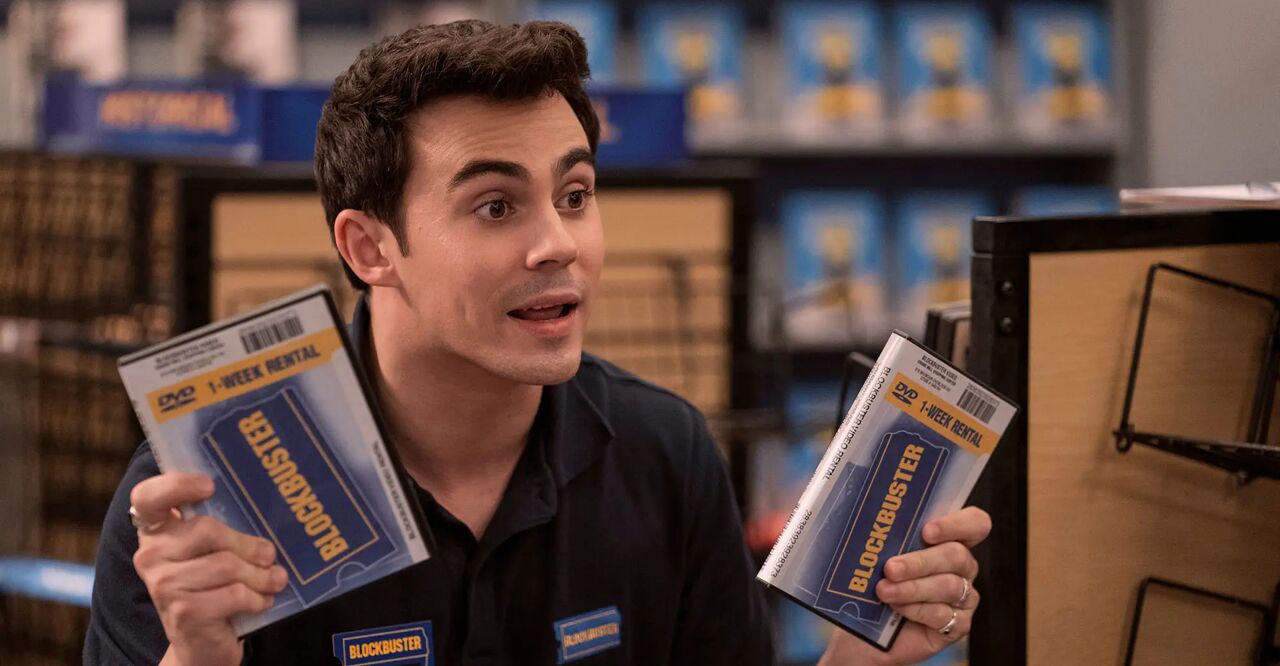 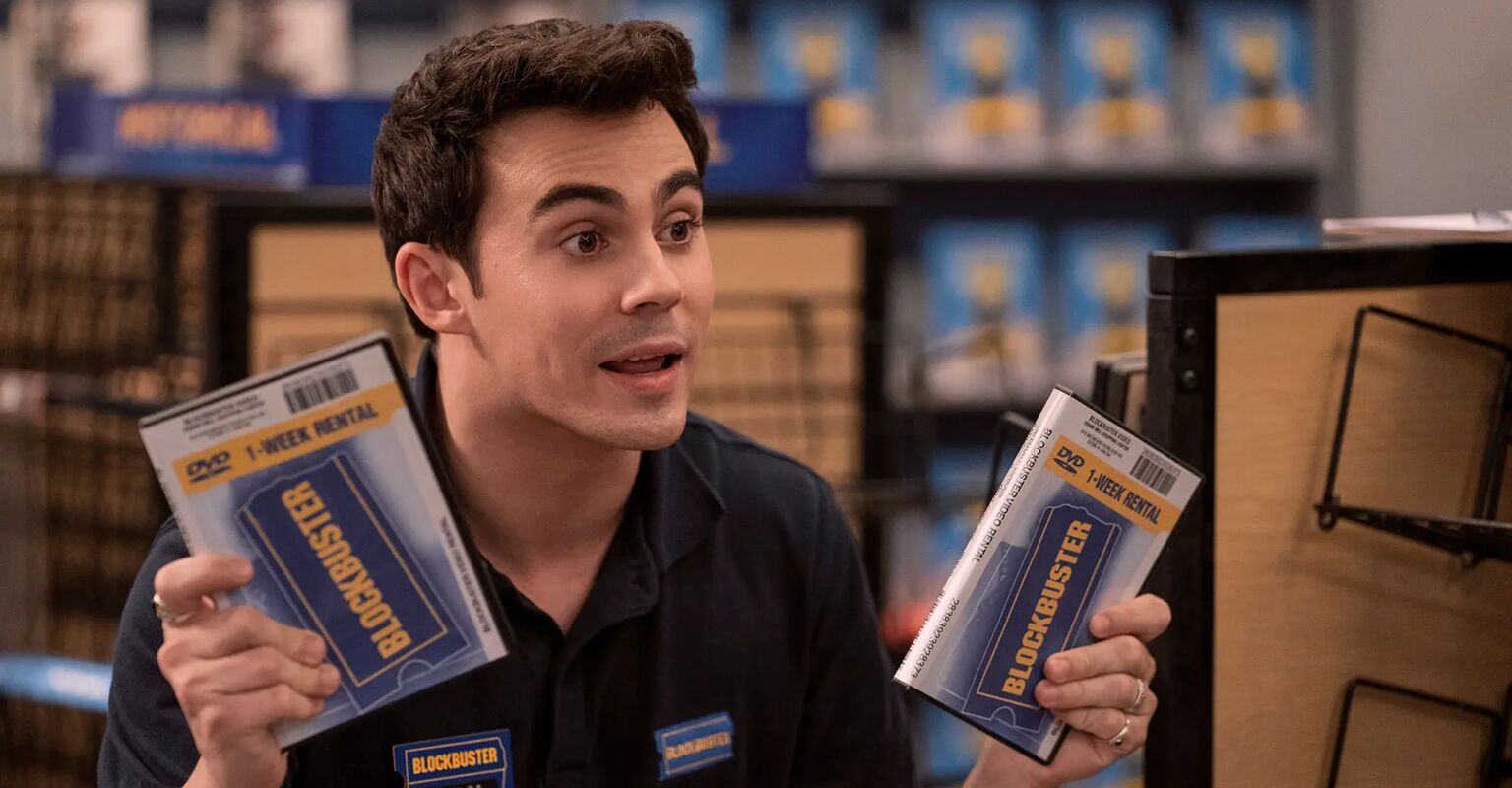 Tyler Alvarez is charming, compelling, and casually queer as Carlos, one of the endearing employees at the last Blockbuster store ever on Netflix’s new series. His character’s effortlessly embraced bisexuality makes the workplace comedy —very evidently created by the writers behind “Superstore” and “Brooklyn Nine-Nine”— worth watching.

“Blockbuster” (now streaming on Netflix) is surprisingly funny. Alongside the familiar beats of an in-store workplace comedy, the nostalgia of seeing people going into their local video store to rent DVDs—along with the irony of watching this in a show created by Netflix—you’ll find yourself regularly laughing out loud at outrageous standout lines. The premise? Carlos’ boss, Blockbuster store owner Timmy (Randall Park), is a vaguely incompetent businessperson whose strength lies in his misfit crew of employees, customers, and neighboring businesses. They help him explore a variety of misguided attempts at keeping the last Blockbuster on earth from closing down.

There’s a particular magic when comedies created for families to watch together choose to embrace a character’s queerness with the same weight as their many other qualities. It always feels significant and revolutionary to me when a character can be seen for all that they are, their queerness seamlessly blending into the humor and hope of the show’s overall tone. Because television has a wide reach and a tremendous impact on society, it’s a detail that can be so personal, and deeply powerful. For a mainstream audience, shows like “Blockbuster” may be the first time they hear the word “bisexual” out loud on screen —and here it is presented in a safe, welcoming space that moves swiftly along, asking nothing of them but to see and love and laugh with these characters as they live their lives. Depicting queerness as a part of enjoying our everyday lives is essential in the fight to build an inclusive world for ourselves and the generations to come. Carlos in “Blockbuster” is one of my favorites to ever do it: The way his bisexuality is joyously integrated into so much of the show feels both important and delightful.

We discover Carlos is bisexual in episode three, after we’ve learned of his filmmaking ambitions and childhood as an immigrant to America; In “Blockbuster” each of these characteristics holds equal value and depth. During his cute, competitive enemies-to-lovers storyline with Damon (Max Lloyd-Jones), a Blockbusters temp hired to help at the store for the Halloween horror movie rush, Carlos has the classic sitcom realization that he’s been misinterpreting Damon’s actions all day. After Damon confesses that he’s been trying to flirt, the two men share a kiss, which Carlos quickly interrupts, to clarify: “Wait, I know we’re making out in a closet, but I’m not in the closet. Openly bisexual and proud.” Later in the episode, while holding hands and drinking beer, they discuss their cinematic queer awakenings: It’s Rufio in Hook for Damon; “Young me wanted to bangarang him.” Carlos’ answer? “Hands down, Addams Family. I mean, Angelica Huston and Raul Julia?” When he adds Y Tu Mamá También to the list, saying “It’s totally straight for 90 minutes,” Damon joins in enthusiastically “—Until it’s not!”

For a mainstream audience, shows like “Blockbuster” may be the first time they hear the word “bisexual” out loud on screen.

Passionate and outspoken about his dreams to one day be a director, Carlos can trace his filmmaking pursuits back to when he first moved to the United States at age five. His family only had access to one TV channel, which frequently featured a local film critic named Hollywood Harold. “I learned English from the movies he played,” Carlos shares with his co-worker, Hannah (Madeleine Arthur). It’s refreshing that the only true struggle in Carlos’ representation of a young, ambitious out-queer immigrant—loved fiercely by his accepting parents—is “coming out” as an aspiring filmmaker instead of the accountant his family wants him to be.

In another episode, when Carlos discovers that his ex-girlfriend is getting married and wants to dive back into dating, his co-workers jump in to help by figuring out his type. Hilariously groaning at his proclamation that “I fall in love beyond type or exterior. I am attracted to souls,” they set out to prove that everyone has a type. The casual conversation covering his dating history and celeb crushes (including Tyler Perry as Madea, Tessa Thompson in the Taika Waititi-Rita Ora throuple, and Indya Moore in Escape Room 2) is fantastic, discussing different genders without a blink of an eye. Carlos’ type turns out to be narcissists, as revealed through his attraction to Quinn (Seth C. Marks), a gorgeous customer who uses they/them pronouns and won’t stop talking about themself.

Carlos proves the value of allowing queer characters to be more than vehicles for anguishing over who they love, a moral lesson, or an educational tool for ignorant conservative characters.

One of Carlos’ most meaningful storylines is about inspiring his co-worker, Hannah, who was raised in a thrifty household reliant on coupons, to lean into self-care, gently pushing her to spend money on herself sometimes and to dream bigger for her future. “Blockbuster” spends a great amount of time exploring the impact of parents and tumultuous childhoods on each of its characters. This encouraging, enlightening arc in Hannah and Carlos’ relationship is an excellent, quite emotional example of the way our parents’ struggles can hold us back in more profound ways than we recognize. Carlos’ open-hearted, determined support, which eventually leads to Hannah getting accepted into community college, shows how kindness can widen our worlds. He also proves the value of allowing queer characters to be more than vehicles for anguishing over who they love, a moral lesson, or an educational tool for ignorant conservative characters.

Queer people —on screen and in real life— should be allowed to have big dreams and spontaneous kisses, share their experiences of love, and be treasured by their family and friends alike. “Blockbuster” gives us all that and more with Carlos, and it’s a joy to see queer actor Tyler Alvarez shine in his portrayal of the bisexual filmmaker. ♦