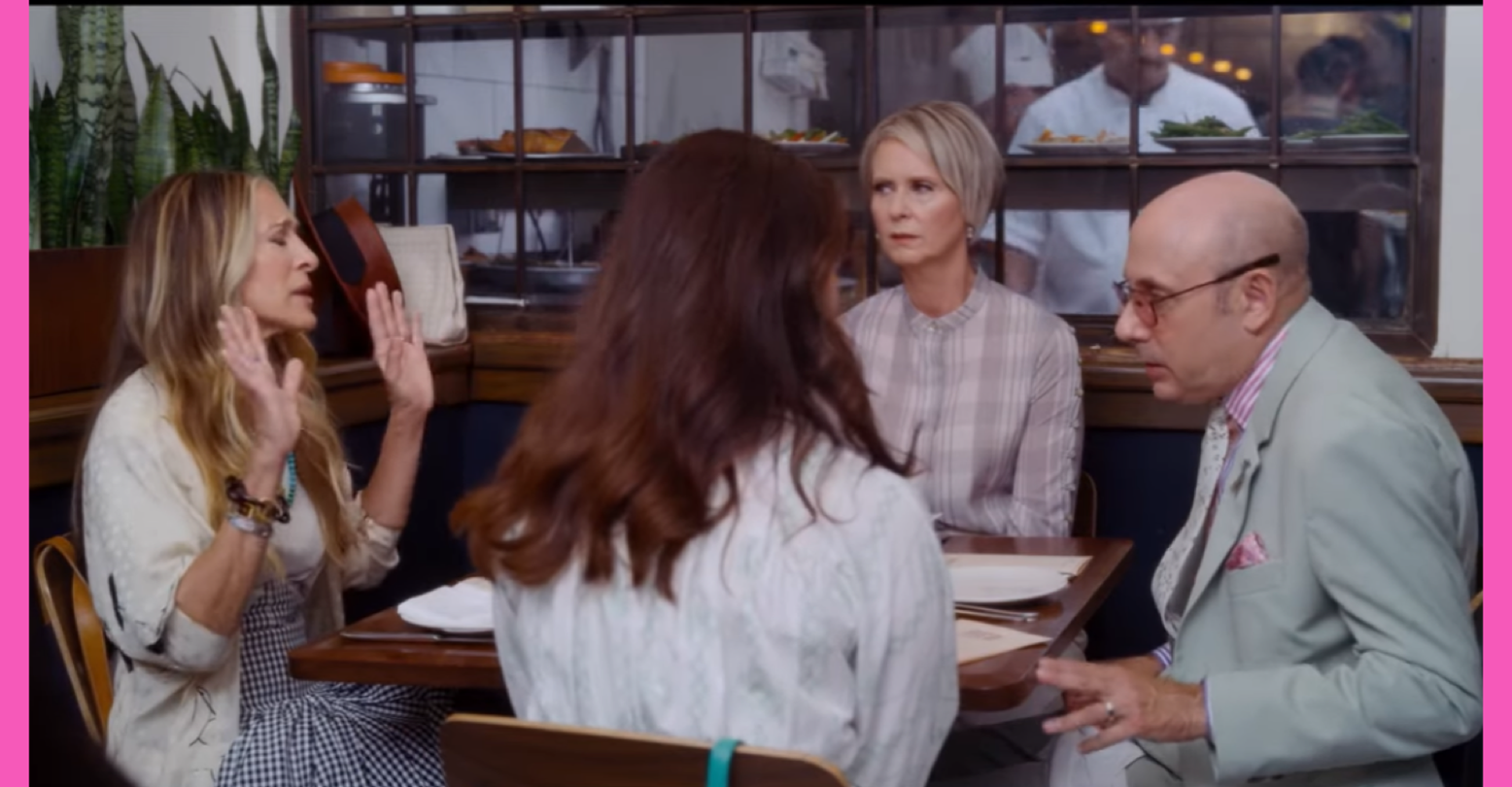 As we are (unfortunately) stuck in the franchise revival era of entertainment, we are currently being doused with the reboot of the Sex And The City (SATC) franchise, HBO Max’s And Just Like That… (AJLT).

If it isn’t clear yet, I’ll admit now that I’m not a fan of clear cash grabs with nostalgia and unoriginality, especially for premium television content. However, I did grow up watching SATC (sorry, mom) and the notion of the beloved show returning with its original cast of characters wasn’t the worst idea in the world — after all, the last visits to the franchise were not too long ago, with film Sex And the City 2 (2010) and the prequel CW series The Carrie Diaries (2013-2014).

That is, until it became news that Kim Cattrall wouldn’t return to the franchise or appear in the show. Beyond her alleged feud with Sarah Jessica Parker, there are several other reasons Cattrall chose not to return that have not only proven to be valid, but reasons why the show honestly shouldn’t have been made at all, even without her.

As we learned from Jennifer Hudson’s character in the Sex And The City movie, this show is only best approached from the understanding that it’s made by white people, from a white perspective, for white (now older) audiences. That, in of itself, is not even a bad thing, it’s just the fact of the matter. That alone doesn’t even make it a bad show; look at other HBO series such as Succession and Game of Thrones, for example. So the issue with diversifying solely in the name of “representation” as And Just Like That… does is that it terribly represents the diverse people they seek to show.

When SATC first aired, that was covered up by, among other things, the fact that what was being put on television was borderline revolutionary: open discussion of sexuality and gender norms. With AJLT, the show is so out-of-touch that you’d expect an Alec Baldwin cameo at some point. Honestly, that probably wouldn’t have hurt, in hindsight.

While those involved with Sex and the City recognize the show as one of the best of its time and know it was massively acclaimed, they still misunderstand why that was the case. And, as was the case for much of the last 25 years, the show’s production and everyone involved with it suffers from the pitfalls of today’s world: the failures of late capitalism, centering of whiteness, endorsement of the patriarchy, and yes, even though there’s a queer character in AJLT, insufferable heteronormativity.

For starters, Cattrall has revealed since the original show first ended in 2004 that she, and likely her other co-stars besides Parker, don’t get paid equitably. “I felt after six years it was time for all of us to participate in the financial windfall of Sex and the City. When they didn’t seem keen on that I thought it was time to move on,” Cattrall said at the time.

That means that while she was beloved for the role of Samantha Jones — the most beloved main character in the franchise and the only one with consistent development besides Parker’s Carrie, the focus of the show — there was very little incentive for Cattrall to keep starring on cable television’s top show for less money than that was worth. Even Parker admitted later that she was not wrong for speaking up about that. (Remember, Parker was an executive producer, and remains so, on anything SATC.)

The same year the show ended, rumors of the Cattrall-Parker (and everyone else) beef began to arise, largely fueled by the fact that Parker, Cynthia Nixon, and Kristin Davis all sat together, without Cattrall, at the Emmys. Meanwhile, Cattrall was going through a divorce and her father had gotten dementia when she decided not to return to the show.

“Are we the best of friends? No. We’re professional actresses. We have our own separate lives,” she later said in 2008.

Which is another issue with franchises like this anyway: Most people get sick of doing the same thing, for so long, and not gaining anything new from it. Cattrall put in six years on a show where she was paid less and given limited ability to grow and succeed! How many of us have learned to move on from situations like these already? Unfortunately, Cattrall remains attached to these women that may have very well not have ever cared for her (or vice versa) for a quarter-century simply because studios can make millions of dollars from their mere proximity. I’d be exhausted too!

Years later, she did return to the franchise for the blockbuster movie of the same name, because she felt “I was ready and strong enough to revisit Samantha.” Unfortunately, the rumors of the lack of a friendship between Parker and Cattrall continued to circle the franchise, and when a sequel was ordered, that did not improve.

“She and I are sick of this. It’s exhausting talking about it, and a real bore,” Cattrall said in 2010.

The expectation that women have to get along and be best of friends while working together, or else they’re amidst a catfight or feud, is plain old sexist. At best, Cattrall and her co-stars weren’t sharing meals together after filming eight-to-twelve hours, day after day, right next to each other. At worst, Cattrall and Parker didn’t care to speak to one another outside of work. And what about it? “They just didn’t do it to the Sopranos guys,” Parker said in 2016.

Still, a third movie was scrapped, and tabloid rumors put all the blame on Cattrall’s “demands” that her other projects in the works get just some of the amount of attention and dedication SATC has gotten. Cattrall was made out to be ridiculous and difficult in Hollywood circles simply because she wasn’t willing to sell herself short to play the same sidekick-adjacent character for the umpteenth time in a row.

That narrative is largely ineffective with the general public, especially now, as more people are learning that we all need to protect ourselves and deserve better from labor in America.

Cattrall tweeted in 2017 that her “demand” was that she just didn’t want to do it anymore. The following years saw her publicly, completely, blast any notion that she was going to return out of the water, making more and more clearer that she wants out of this cinematic universe, and who can blame her?

Anyway, I’m rehashing all of this not for the hell of it, but to put in perspective why And Just Like That… just shouldn’t have happened, because all of that is leagues more interesting than what the actual show put on air. Cattrall moved on from the show then, and everyone else should have followed suit this time around. Unfortunately, everyone but Cattrall signed on to return, and the result was a heaping mess of everything that made SATC imperfect, but amplified by less-than-stellar writing and failed diversifying.

The main cast — Parker, Nixon, Davis, plus Chris Noth as “Mr. Big,” all returning, and Sara Ramirez joining as Che Diaz — are all still top-notch actors. They clearly did what they could with the material. The material, itself, was also not outright terrible; the writer’s room did what they could to bring the show to the modern age, and that’s worth recognizing.

But the resulting plot and plot twist — Spoiler Alert: Skip to the next paragraph if you haven’t heard, somehow — leads to Mr. Big’s absurd death, in Carrie’s arms (while still breathing, and as Carrie doesn’t call 911) after a heart attack following a bout with a Peloton bike. Then there’s the even more absurd post-death emotional responses, complete with Carrie’s wanna-be Kennedy-esque funeral for him, and that’s just what happens in the first episode and beginning of the second.

I’ll admit, I only ended up watching this at the imploration of friends, and after a [redacted] amount of drinks, with a limited recount of the franchise’s events, and I still rolled around laughing from second-hand embarrassment. Carrie’s still suffering from insufferable main character syndrome, Charlotte and Miranda (and their writers) are still bumbling around to find their identity outside of her, and there’s no Samantha to keep us attentive in the meantime.

For those solely interested in the queer angle, Ramirez plays non-binary radio host and comedian Che Diaz, who Carrie now works with because God knows she would’ve moved to Substack otherwise. While Ramirez deserves the role and plays it well, it turned bad in true SATC fashion in a scene in the second episode where Miranda berates Diaz for allowing her son (unbeknownst to them) to take a pull on an e-cigarette. Miranda chastises Diaz in true Karen fashion, but for some Karen-y reason, relents when Carrie introduces the two without knowing they had already met.

Somehow, this leads to a plot point in the third episode, where Miranda (still married, if you cared!) and Diaz share a moment that leads to Miranda’s “gay awakening,” in Nixon’s words. This all doesn’t even begin to touch on Miranda’s repulsively cringe relationship with a Black professor (Karen Pittman) she takes a class with, or Charlotte’s ridiculous inability to not be treated like a ten-year-old for more than a few moments.

That’s not even mentioning the fact that Noth is being accused of sexual assault, the latest of decades of sexual misconduct allegations against him (which anyone remembering his hayday back as a Law & Order star could’ve reminded you of) — but in the meantime, he’s cashing in on Peloton ads.

And the entire “explanation” of Samantha’s absence, while plausible, leaves more questions than answers for the viewer, the main one being: Why did they even do this? Samantha is mentioned quite often, and even allegedly sends flowers to Carrie in her absence, which is ironic, considering Cattrall famously lashed out at Parker for making an Instagram post about Cattrall’s brother after her death.

AJLT left me feeling, quite likely how Cattrall feels now, after all these years: how can one not be exasperated from the torment of this never-ending mess, besides those earning residuals from it?

In the end, there is one — and only one — redeeming thing from this entire mess: the curtain call it provides for the late Willie Garson. While straight in real life (let’s save the straight actors-playing-gay roles debate for another, less absurd show), Garson’s turn as one of television’s first — and to date, one of the few — not-terrible-to-watch gay characters on a sitcom remains beautiful.

Garson’s character, Stanford Blatch, has a heavy role in the series, and while I can’t recommend anyone watch it, he is the only reason to give it a chance, especially if you’ve endured much of the franchise before. Or, as Garson said himself, if you have never seen anything related to it, you might be able to somewhat enjoy it because you’ll consider that it “has nothing to do” with Sex and the City. (In that situation, I envy you.)

How his character’s run comes to an end remains to be seen (he won’t die, like that other guy), and so I guess that’s something that might keep pulling people like me — who get their full of white, cishet, nonsense elsewhere — back to suffer for the rest of the 10-episode series.

Otherwise, as Cattrall once said, “I don’t want to be in a situation for even an hour where I’m not enjoying myself.” That’s reason enough for me, and anyone else, to bow out of this.

And Just Like That… should give viewers three revelations about the franchise, and television or society as well: Kim Cattrall was right about it all, one, and two: Goodness, the bar is low as hell.

Three: Rest in peace to the talented Willie Garson.

See Also: Fans Pay Tribute to Willie Garson, Who Spoke to a Generation of Queer Men

Tags: And Just Like That..., Kim Cattrall, Sex and the City, Willie Garson