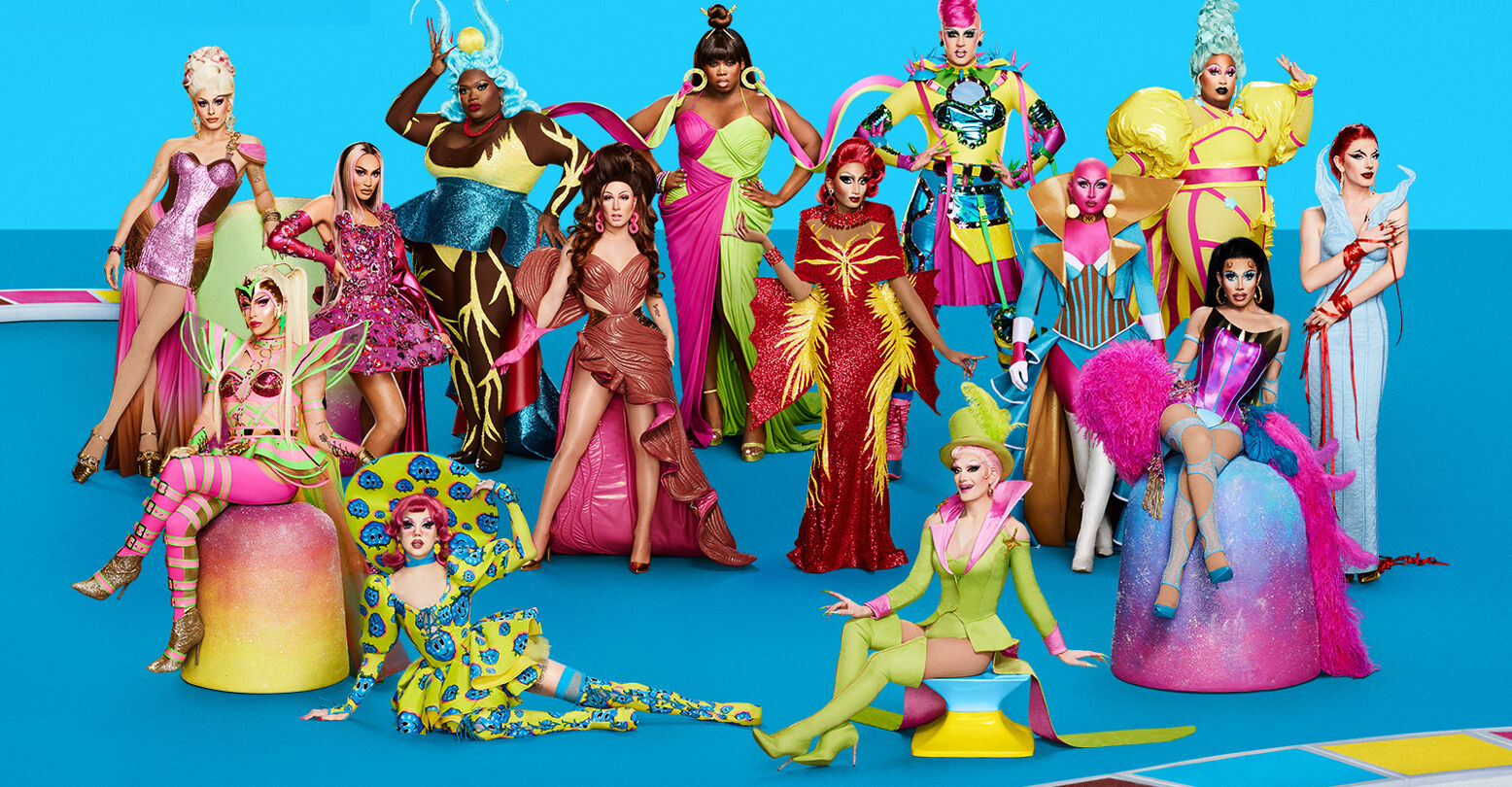 Welcome back to the INTO RuView, where we recap “RuPaul’s Drag Race” week by week. It’s a brand new season with a brand new crop of queens, and I have a brand new load of opinions to match. Let’s get into it.

The season opens with seven queens entering the werkroom, offering a tagline and a signature look. With just seven queens, I may as well rank them all, right?

For the first time in “Drag Race” herstory, two trans queens are competing on a regular season of the show! That’s Kerri and Kornbread, who both looked fabulous in their entrances, but Kerri takes the cake with this stunning interpretation of the trans flag. Apparently she also makes all her own hair?? I’m obsessed. She’s quickly become one of the most beautiful queens ever to enter the workroom.

Kornbread, of course, also turned it out. I love the creativity of those gold flexi rods in the hair, and this leather coat is tailored to perfection. Winner energy.

Okay LISTEN. This look has been the subject of much debate, and I am here to say that I stand by this look and its iconicity. It’s FUNNY. It says ANGLE. She’s wearing FLIP-FLOPS. I live for the Ashley-Tisdale-on-the-red-carpet camp of it all.

Meh of the Week: Bosco

Not a bad look! But not a standout among this group. Seriously, though, I kind of love Orion’s energy. She seems high 100% of the time, and I’m here for it.

Sue me, but I hate these fabrics together. This look’s biggest sin, though, is the way Alyssa held the bow and arrow when she posed. Girl, if you’re gonna carry a prop, learn how to use it!

June’s look is the only one I think is genuinely bad. The colors make no sense, there’s no story to be found — and, sorry, we’re coming for Willow’s choice but not June’s??

Ru appears to tell the girls that they’re the first seven queens of Season 14, and that by the end of the episode, one of them will sashay away. *Gay gasp!* This show’s been switching up the premiere format for the past few seasons, but this time seems to be a return to form, complete with a photoshoot mini-challenge!

Now, when I saw that giant wheel with Symone, Jaida, and Yvie on it, I assumed the queens would be spinning the wheel to decide who they’d do a photoshoot with. But thank the Lorde, “Drag Race” had a much better idea: spinning the queens like a medieval torture method!

Gotta be honest, I didn’t have high hopes for Kerri’s photo when I saw how her loose fabric was getting in the way. But the end result is stunning, so her win here is well deserved!

Ru announces the week’s main challenge, the Charisma, Nerve and Talent Show, or the C.N.T.s. “All that’s missing is you,” he says. Ba dum tss. I like starting off with a talent show! It gives the queens full creative control so we can see what they do best … or what they think they do best.

Before that though, we have to give a shoutout to this week’s guest judge, Lizzo, who looks STUNNING in silver. And a moment of … confusion? For RuPaul’s impromptu performance to her new song, “Catwalk.” It was weird as shit, and I lived for it.

First up in the talent show is June, whose dance abilities are fabulous. Unfortunately, she’s rough around the edges, with her headband falling in her face and her brown shorts showing under her dress. Even without those malfunctions, her energy peters out in the second half of the number.

Next is Bosco, who gives a lovely floral burlesque number. It’s not anything we haven’t seen before, but it’s very well executed! A truly safe performance.

Alyssa delivers a rock lip sync, complete with a tattooed bodysuit and a fake guitar. She says it herself in her confessional: “This is very different from who I am.” So while the performance is fine, it’s a bizarre way to introduce herself to the world.

Kerri’s jump roping is super impressive, though I wish the rope itself were more visible. Also, I wish she were jump roping for the whole number, because the first half was pretty lackluster. Still, I’d also put Kerri firmly in the safe camp.

Next is Orion. Oh, Orion. As she later admits, this was mostly improvised, and it shows. She’s naturally funny, but this skit didn’t have nearly enough punchlines to compete with the caliber of talent this episode.

Kornbread takes the stage. Say it with me: WINNER. ENERGY. She was captivating from beginning to end, and I agree with Bosco — the way she juts her head forward gets me every time. And these lyrics are too catchy. I have never heard the word “angular” used to such great effect.

And last is Willow Pill — or as Ru says, Wiwwow Piww. Now this, this is my kind of drag. Quirky, conceptual, batshit insane. Willow instantly became a favorite of mine with this performance.

Alyssa looks undeniably great. Those feathers are gorgeous, as is the beading on the dress. But this is another reflection of Alyssa’s apparent identity problem! Every look from this week has felt like a different queen. Hopefully next week we’ll start to get a better idea of her perspective.

I get the critiques about this look — I agree it would be better with some volume on the head. But it’s still a lovely look, particularly the material, and it’s fun to see a glamorous side of Kornbread that still feels true to her brand.

If Alyssa is all over the place, Willow’s brand is becoming crystal clear: She’s a weirdo! This color combo is unconventional, but I think I love it? That strong point of view is what elevates the look for me.

Meh of the Week: Bosco

Damn, I gave Bosco the “meh of the week” again? Well, I stand by it. She looks good, and she also has a strong brand. She’s the devil of the season! But I would like a touch more variety in the future.

Kerri, of course, looks gorgeous in the face, and the body is ridiculous. But there’s way too much going on here for me. What does the coat have to do with the dress? And what do the boots have to do with anything? Then there’s the unfortunate placement of all those Ks … she’s lucky there were lots of them.

I think what’s throwing this look off for me is the cut of the pants. Where they’re hitting June on the calf is, like, capri-length, which doesn’t scream glamor for me like the rest of the outfit. I’m also not a fan of these tulle shoulders, which read like an afterthought. But the stoning is great, and June’s makeup has been impeccable in every look.

For a girl whose last name is Story, I sure don’t know what story she’s telling. From the mushroom aesthetic to the Christmas colors to the rosy makeup to the furry nails to the three boobs … jeez, I’m out of breath. It’s just too much.

Kornbread, Willow and Bosco are the tops of the week, with Kornbread snatching the first win of the season! Well deserved for that stellar performance. I maybe would’ve given it to Willow, but I might just be stanning too hard. Regardless, all three are definitely big players this season.

Alyssa, Orion and June are the bottom three, with Alyssa being saved the lip sync. I agree, though if she had a weaker runway I might have swapped her with June.

That leaves June and Orion to lip sync to “Water Me” by Lizzo, a song I am so glad more people will be aware of from now on. A bop if I’ve ever heard one. Immediately, June has far more energy and expression than Orion, though I wouldn’t call it a total blowout. Orion has a wig reveal, some fun moves and even a jump split, but it’s not enough to save her from becoming the first out of the season.

I feel really bad for Orion. It must be heartbreaking to finally get on “Drag Race” just for it to be cut short in the first episode. But this show is known for its tricks, so who knows if we’ve really seen the last of her.

Coming out of this first episode, I’m a big fan of Willow and Kornbread. I’m excited to meet the rest of the cast next week and add a few more favorites to my roster. See you then!