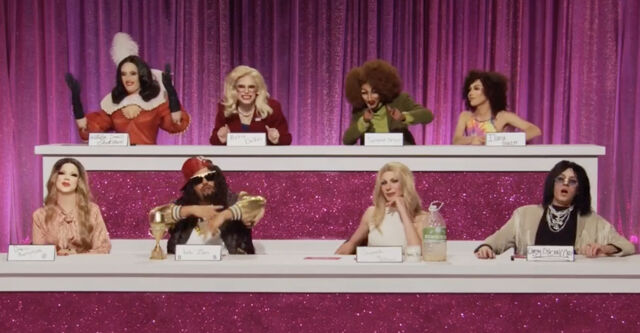 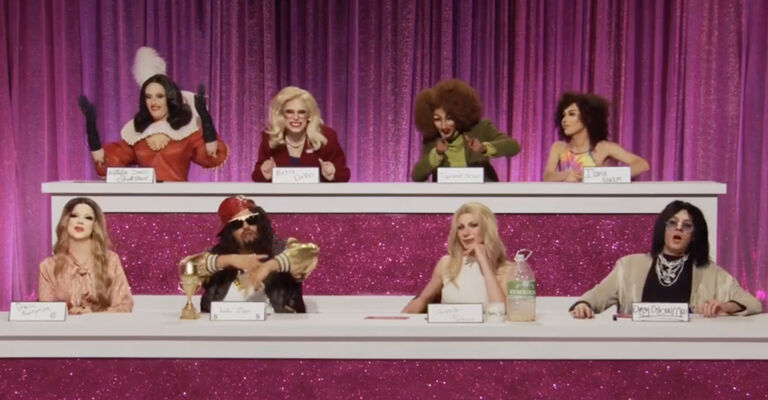 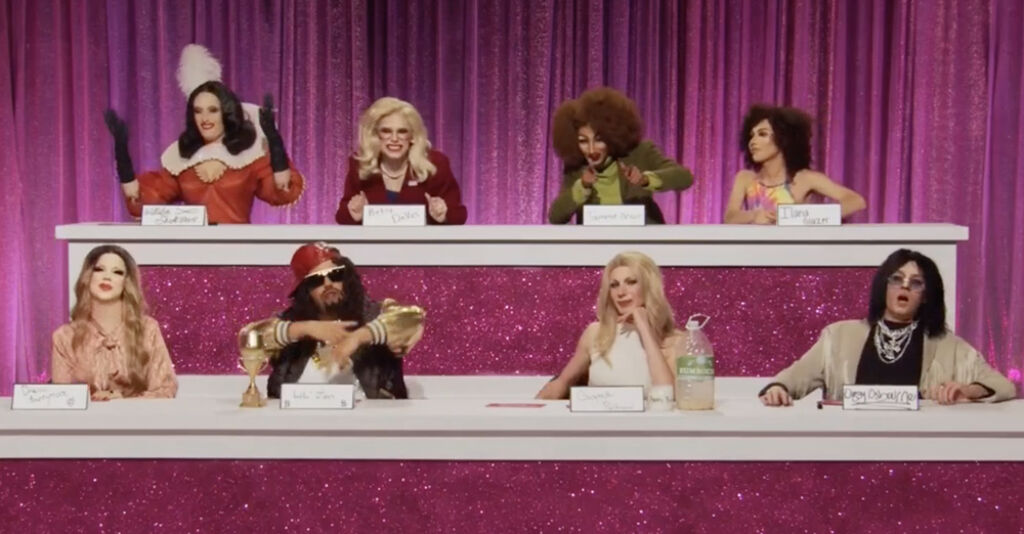 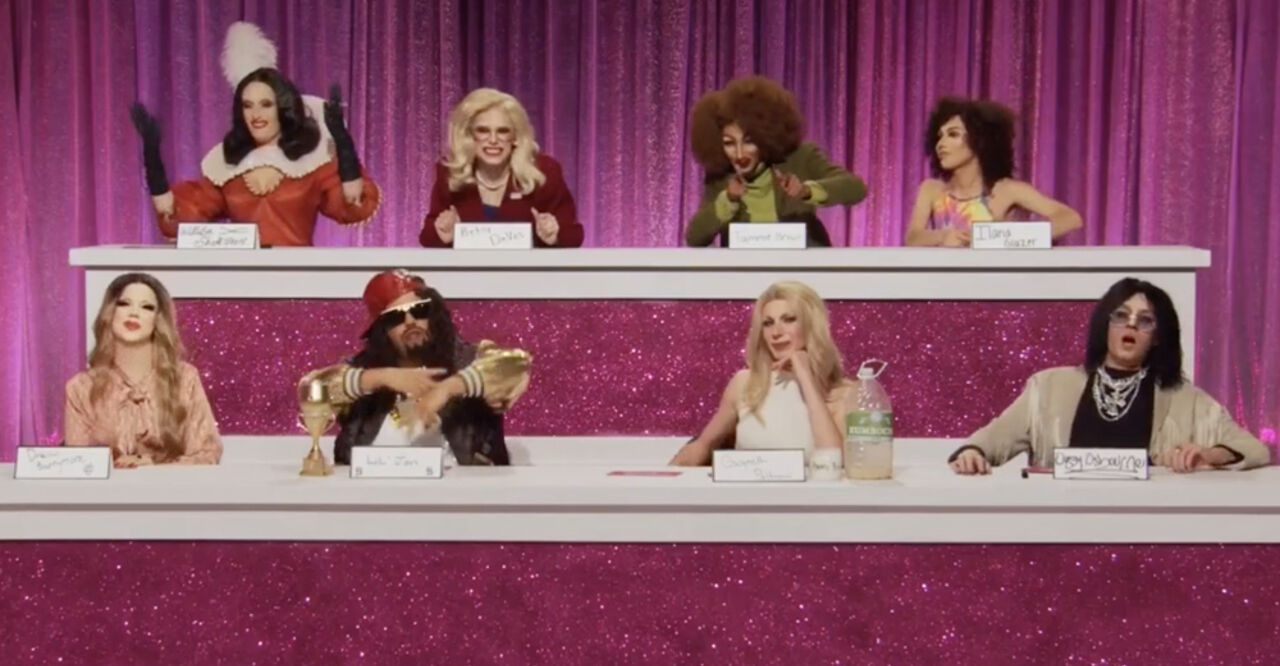 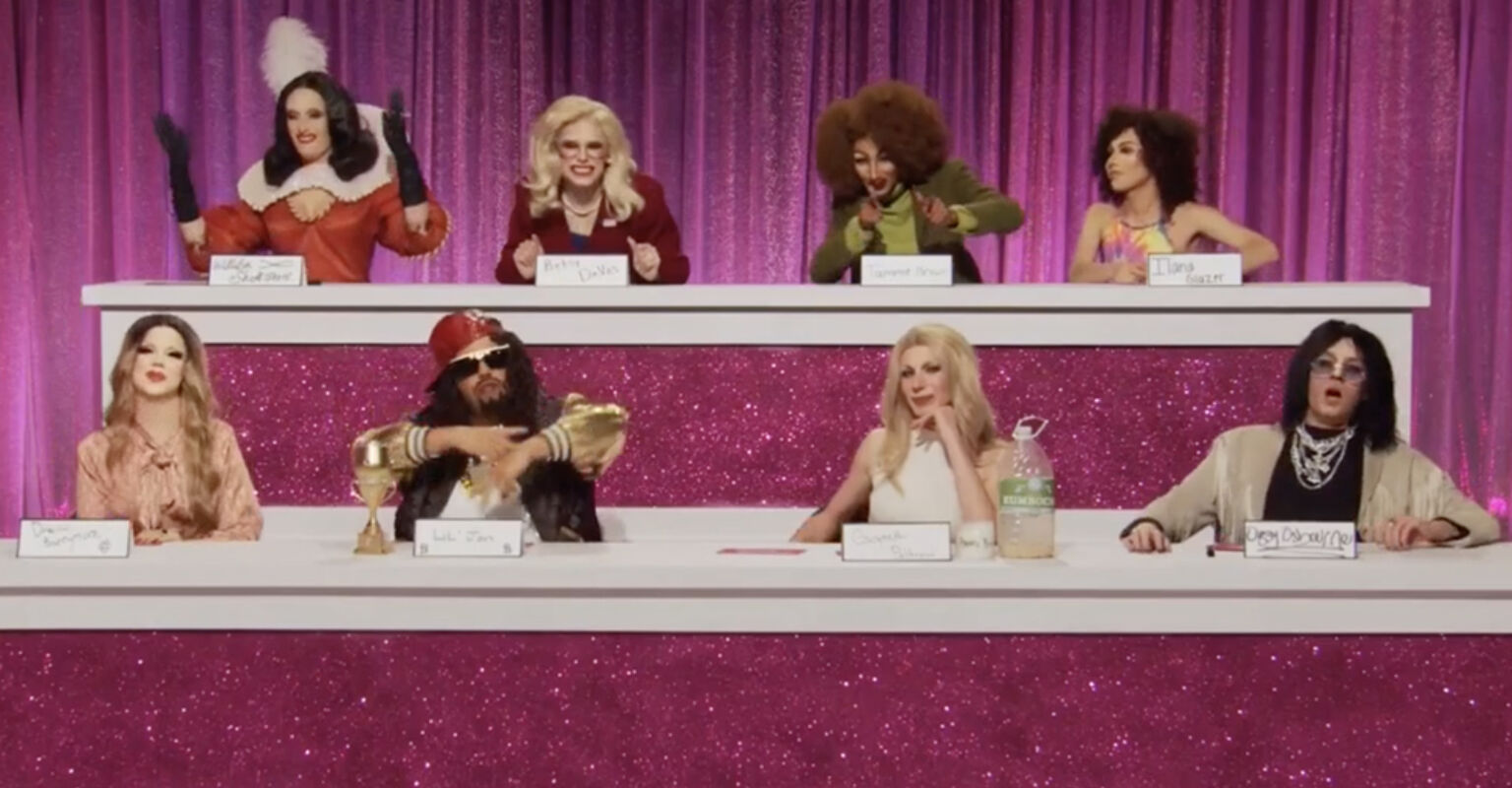 Welcome back to the INTO RuView, where we recap RuPaul’s Drag Race week by week. This episode, the queens played the Snatch Game! Well, “played” is generous for this rendition of the legendary challenge. Y’all, where did this group go wrong??

The episode picked up after the double shantay, where we got another helping of Daya’s villain edit. This time, she claimed the Jasmine/Jorgeous lip sync “wasn’t that good,” and that she’s annoyed there are still eight queens in the competition. I mean, I’m a little annoyed too, so I can’t blame her! I’m sure the season feels even longer from the inside.

We also get a tearful confessional from DeJa, where she laments always being second place, but never winning a challenge. Spoiler alert: don’t worry, girl, your safe streak is about to come to an end.

The next day, the girls compete in a mini design challenge, making red carpet looks from bubble wrap. Standouts are Angeria, whose outfit could literally walk the runway, Bosco, who’s the spitting image of Aquaria walking into Season 10, and Jasmine, who loses her wig in fabulous fashion.

Ru awards Bosco the win! She had the coolest silhouette, so I agree. Ru then announces that the time has come: they’re playing the Snatch Game. It only took 10 episodes, but it’s finally here!

I was really excited for this Snatch Game. This is a seriously witty group of queens. Bosco and Willow consistently crack me up, Angeria is effortlessly funny, Camden and DeJa are pretty clever, and even Jasmine and Jorgeous made me laugh in the acting challenge. And yet, this was the worst Snatch Game of all time.

Let’s break it down, queen by queen. First on the panel is Lady Camden as William Shakespeare. Honestly, this was the second best of the week, but it still pretty much sucked. Why were there so few actual references to Shakespeare? And, as Trinity the Tuck once asked, where are the jokes??

Next is Jasmine as Betsy DeVos. This is a case where the queen went way too realistic. She was literally saying Betsy’s platform on education, which, yeah, is not funny.

Angeria just gave a very bizarre, surface-level interpretation of Tammie Brown. There’s so much material there, but all she gave was thumbs and a hunchback.

Next is Jorgeous as Ilana Glazer. She’s just so far out of her element, but props for clearly giving it her all. If this Snatch Game had a top three, Jorgeous might actually make the cut! But that’s more a testament to how poorly everyone else did than a compliment to her. Also, this moment has been playing in my head non-stop. She looks like a living Boomerang.

this legitimately deserves an academy award. her resetting like a video game character selection screen pic.twitter.com/eZBgv1h1V2

Willow as Drew Barrymore … sigh. It just wasn’t funny. I think getting the detail about Ru wrong at the beginning really threw her off her game, and she never got it back. If this episode had a bottom two, I think unfortunately, Willow would be there.

DeJa as Lil Jon! Finally, some good fucking snatch. This was simple, funny and catchy. Yeauhh! Would this have won in a different season? Maybe not, but it was far and away the best of this bunch. I look forward to seeing her Abby Lee Miller on All Stars.

Bosco as Gwyneth Paltrow seemed to be relying on some pre-planned jokes that didn’t land. Where do you go from there? Only down, apparently.

And finally, Daya as Ozzy Osbourne. This wasn’t horrible, but it wasn’t particularly funny either. And copying someone else’s answers is only a good idea if you can back it up with a punchline of your own, which Daya didn’t have.

Shoutout to psychic Willow Pill, who predicted that there’d be “one challenge we’re all gonna bomb” a few weeks ago. What can’t she do? (Besides the Snatch Game.)

Does this have much to do with “holy couture”? No, not really. But I’m convinced that’s not the brief the girls were originally given, because several of them weren’t quite on theme. So, category aside, Willow’s look was my favorite.

The ruffled texture she used to create the mushroom shapes is gorgeous, and her makeup matches perfectly. And the idea of being on shrooms while also being a shroom? Inspired, as always.

I love this concept! The pope of weed — very Rihanna at the 2018 Met Gala. I love the details of her red eyes and purple hair. Plus, the garment itself is gorge. You see how good Jorgeous can look when she follows the category and has a concept??

This is also giving 2018 Met Gala, but in a bad way. It’s Florence Welch meets Zendaya meets Joan of Arc meets a craft store. The execution was just lacking. Luckily, DeJa did so comparatively well in the challenge that she could’ve walked the runway naked and still been safe.

I can appreciate that Camden loves this ‘90s popstar aesthetic. But I do not. And this is its ugliest rendition yet — this pattern is just not doing it for me. And I’m not a fan of this style of platform boot. At least the cape is lined.

This week, we don’t get a top three and bottom three. Instead, we get a top one and bottom seven. I can’t say it’s not warranted, but damn, I did not expect these queens to flop so badly. DeJa, of course, wins the challenge, while Ru announces that the other seven girls did so poorly that they’ll all have to lip sync for their lives in a LaLaPaRUZa smackdown.

The soundbite of the episode for me comes from Daya: “I am just as bad as Jasmine was this week??” No, you weren’t, but you sure weren’t good, either.

I gotta say, I’m excited for an episode full of lip syncs! We haven’t seen Willow, Angeria or Bosco in a lip sync yet, so I’m eager to see what they’ve got. And how many more lip syncs can Jorgeous and Jasmine possibly survive? And what will DeJa be up to??