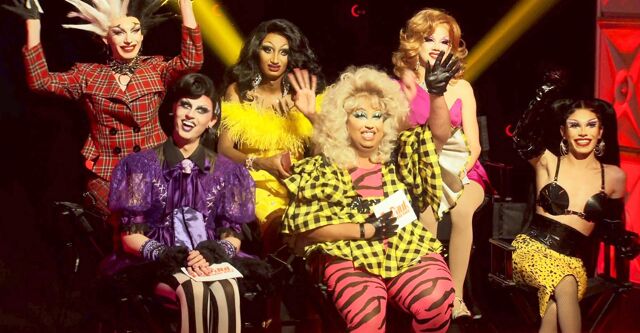 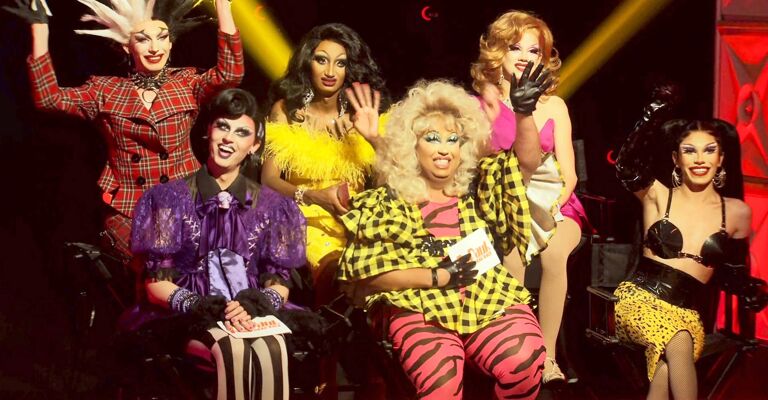 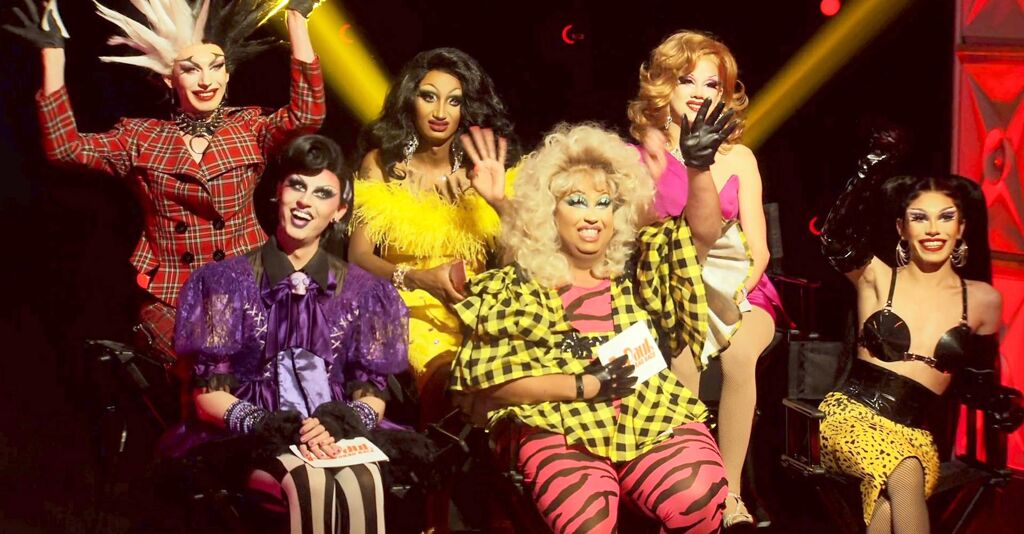 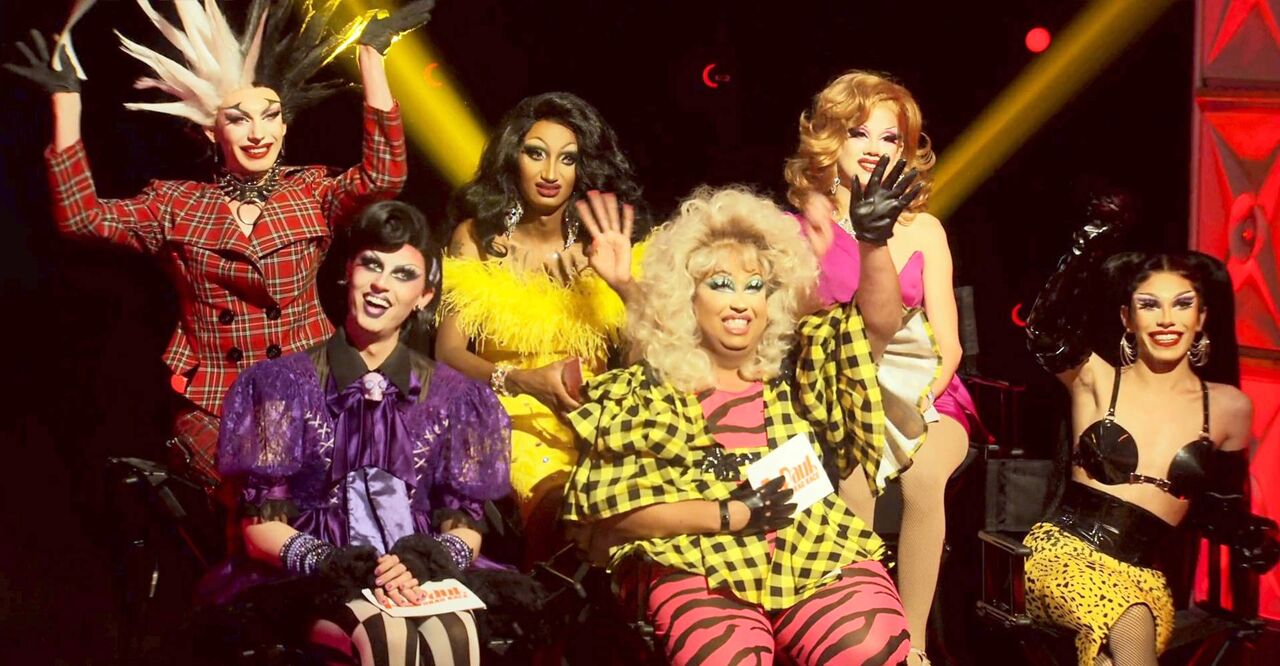 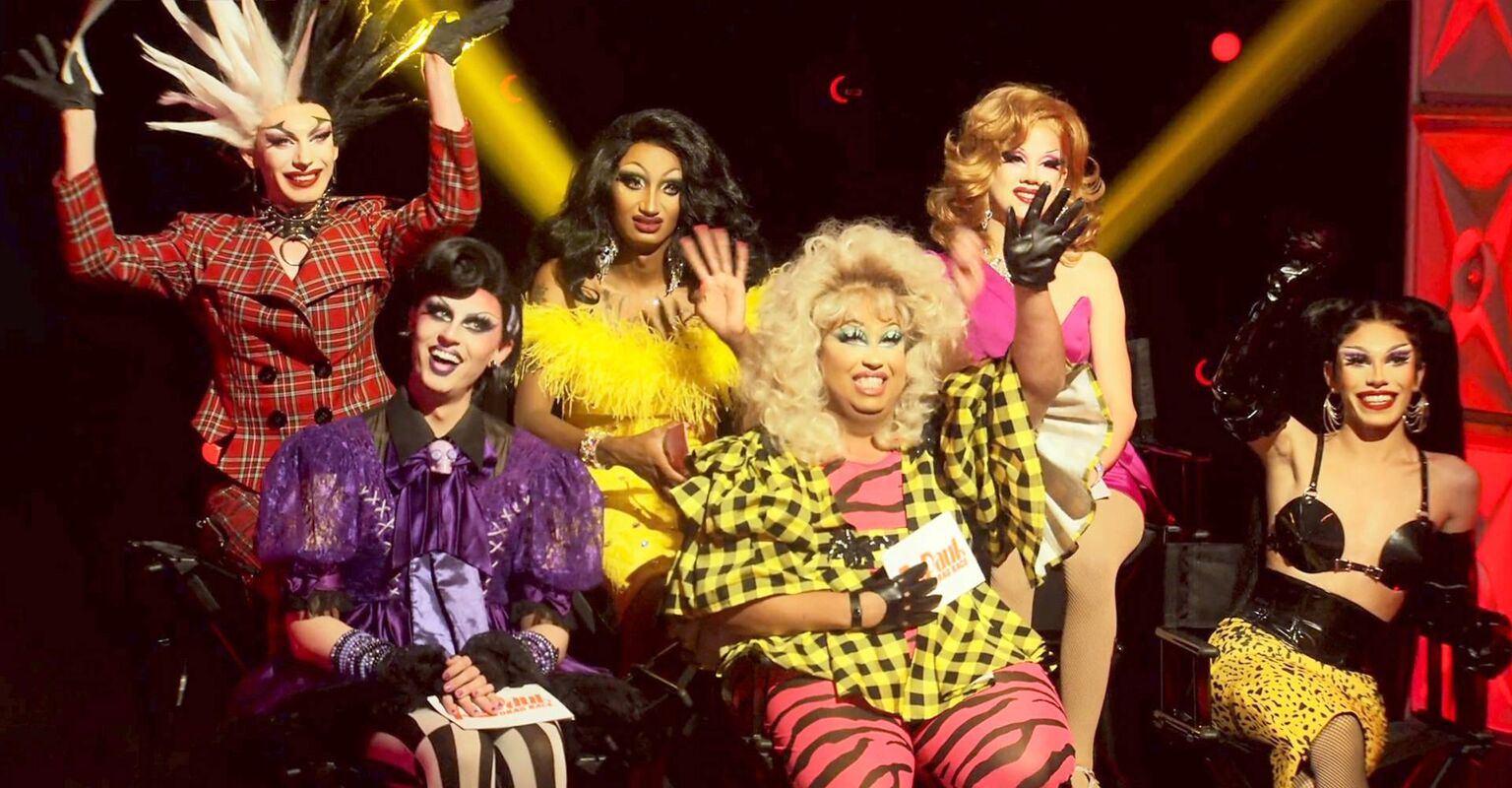 Welcome back to the INTO RuView, where we recap RuPaul’s Drag Race week by week. This episode, the queens flexed their insult comedy chops in a roast of the HiLaRiOuS Ross Matthews, and RuPaul finally decided to send some queens packing.

The episode picks up after Bosco’s lucky chocolate bar save, which, surprisingly, Daya Betty isn’t bitter about! But Jorgeous is. It makes sense — for having been in the bottom four times already, Jorgeous hasn’t actually outlasted that many girls. There are seven left, which is still half of the original cast! 13 episodes in, still having half the cast is … wild.

This week, we get a mini challenge! Always a welcome opportunity to get to know the queens a little better. This time, they split into two teams to paint massive portraits of Ru and Dolly Parton. Angeria, Jorgeous and DeJa absolutely butcher RuPaul’s nose, and his reaction (and Bosco’s reaction to his reaction) is one my favorite moments of the episode.

Needless to say, Camden, Bosco, Daya and Willow win for their mural of Dolly! As a reward, all four of them get to decide the lineup for this week’s main challenge: the Ross Matthews Roast. Ross is a tough guest of honor. You can joke about how he’s really, really gay … and then what? Well, that’s for the queens to figure out.

Speaking of which, the rehearsals are really just previews of the actual roast (shoutout to Dulcé Sloan, who was a great guest judge and mentor), so let’s just skip to the good stuff. For each contestant, I’ll highlight their best jokes — even if there were very few good jokes to speak of.

First up is Bosco, who is rocking a fierce liberty spike wig that she wiggles to great effect. She kills it — I’m a huge fan of Bosco’s dry sense of humor, so I expected to love her, but I’m glad the judges loved her too. A great redemption from her quasi-elimination last week.

Next is Jorgeous, who, bless her heart, does exactly as well as you’d expect Jorgeous to do in a roast. She was defeated from the get-go, so there was no real hope. She does get at least a few laughs, and she doesn’t entirely shut down, so props to her for that.

Willow is third, and she also does a great job! A few of her set-ups are too long, so her set drags a bit, but luckily, she’s got the punchlines to make up for it.

Angeria is next, and even though she doesn’t have the best jokes, she’s performing like she does. That’s ultimately Angie’s saving grace in this challenge: she’s so darn charming you can’t help but enjoy her set, even if it’s not actually that funny.

Daya is fifth, and she kinda ruins her set off the bat by telling the judges how nervous she is. From then on, it’s obvious how uncomfortable she is on the mic, and her weak punchlines can’t dig her out of that whole. I live for this gothic look, though!

After her is DeJa, who in my opinion is far and away the worst of the bunch. She didn’t listen to Michelle and Dulcé’s advice at all, leaving in jokes they told her to cut. Not a single punchline lands except for what she says as she’s leaving the stage:

The queen in question is Lady Camden, who delivers a solid performance to close out the show. It’s true, her echoing asshole jokes weren’t funny enough to warrant so much airtime, but they also cut her funniest jokes, which she delivered in rehearsal but weren’t shown on stage. I’m including them here anyway, ‘cause in my mind, they still count.

Category Is … Tutu Much

I expected a lot from Camden with this theme considering her ballet background, and she didn’t disappoint. This is like the leveled-up version of Brooke Lynn Hytes’ final runway from Season 11. The appliques on her skin, the rosy champagne color scheme, the classic beauty of the tutu itself — it’s a perfect glamor look, in my opinion.

I’m a SLUT for horror, and I’m so excited Bosco is bringing a bit of it to the runway. I’d totally watch the slasher where this look was the villain — or the victim. Bosco definitely had the most creative interpretation of the theme, taking a tutu silhouette and imagining how she could create that shape if not with tulle. That ingenuity is why she was saved by the “drag gods” — ie, the producers.

Willow always kills it in the concept department, and this plastic surgery addict Cruella DeVil is no exception. I didn’t like this quite as much as the judges, though, because it doesn’t scream tutu to me. Tulle skirt, sure, but is that a tutu? Maybe. I don’t care.

Meh of the Week: Daya Betty

Where Camden went full glamor, Bosco went full horror and Willow went full camp, Daya just gave us a pretty standard ballerina. A pretty ballerina, to be sure, and I appreciate that it’s all recycled materials (if her chopped up confessional is to be believed). And the shoes are an excellent choice, and they show her nerve considering her fall a few weeks ago on the runway in similar heels. Not a bad Daya look, just not the best of the bunch this week.

Jorgeous looks adorable, but this is far too basic. And there’s a fundamental disconnect between the dress and the accessories. If it was like a full leather daddy in a tutu moment, that would be sickening. But it’s not. So.

I guess technically this fits the category? But I’m just a little bored of Angeria in a gown at this point. I get it, it’s her brand, but if I’m gonna come for Bosco and Jorgeous, I have to come for Angie too. I put it below Jorgeous because the color is just repulsive to me. To each their own!

Ill-fitting and not really a tutu. Need I say more?

Placements are a little nebulous this week, but it seems that the tops are Bosco, Willow and Camden, with Angie floating in the middle and Daya, Jorgeous and DeJa making up the bottom three. I agree wholeheartedly. No notes!

I also agree with Bosco’s win! It makes her the only queen in the competition to get three wins, but considering she was just about eliminated last week, I’m not sure that I’d call her the frontrunner. Still, it’s great validation that it was worth it to keep her around.

Meanwhile, Ru pulls out yet another gag — it’s about the five-thousandth this season. All three of the bottom queens will have to lip sync, and that’s not all: only one of them will survive. I guess RuPaul used too many non-elimination gags earlier in the season, so now we need a double elimination to make it to the finale on time.

Daya, DeJa and Jorgeous lip sync to “good 4 u” by Olivia Rodrigo. I LOVE this song, and I’m pissed that none of them brought it the way I wanted them to. Jorgeous tried to dance her way through, which just doesn’t work for pop punk. DeJa was way too low energy. Daya definitely did the best, bringing angst in the face and some classic Disney knees, but she didn’t reach full potential either. No one did anything at the song’s big climax! Why weren’t they fully screaming on “Like a damn sociopath!”?? A wasted opportunity, in my opinion, and I demand a Paramore lip sync next season to make up for it.

Regardless, Daya does secure the win, and both Jorgeous and DeJa have to sashay away. I love both of these queens, but I can’t say I’m not glad to be down to a top five. Next episode will determine our top four, then we’ll have the reunion, and then the finale! For as long as this season’s felt, I can’t believe it’s ending in just a few weeks. Team Camden for the win!