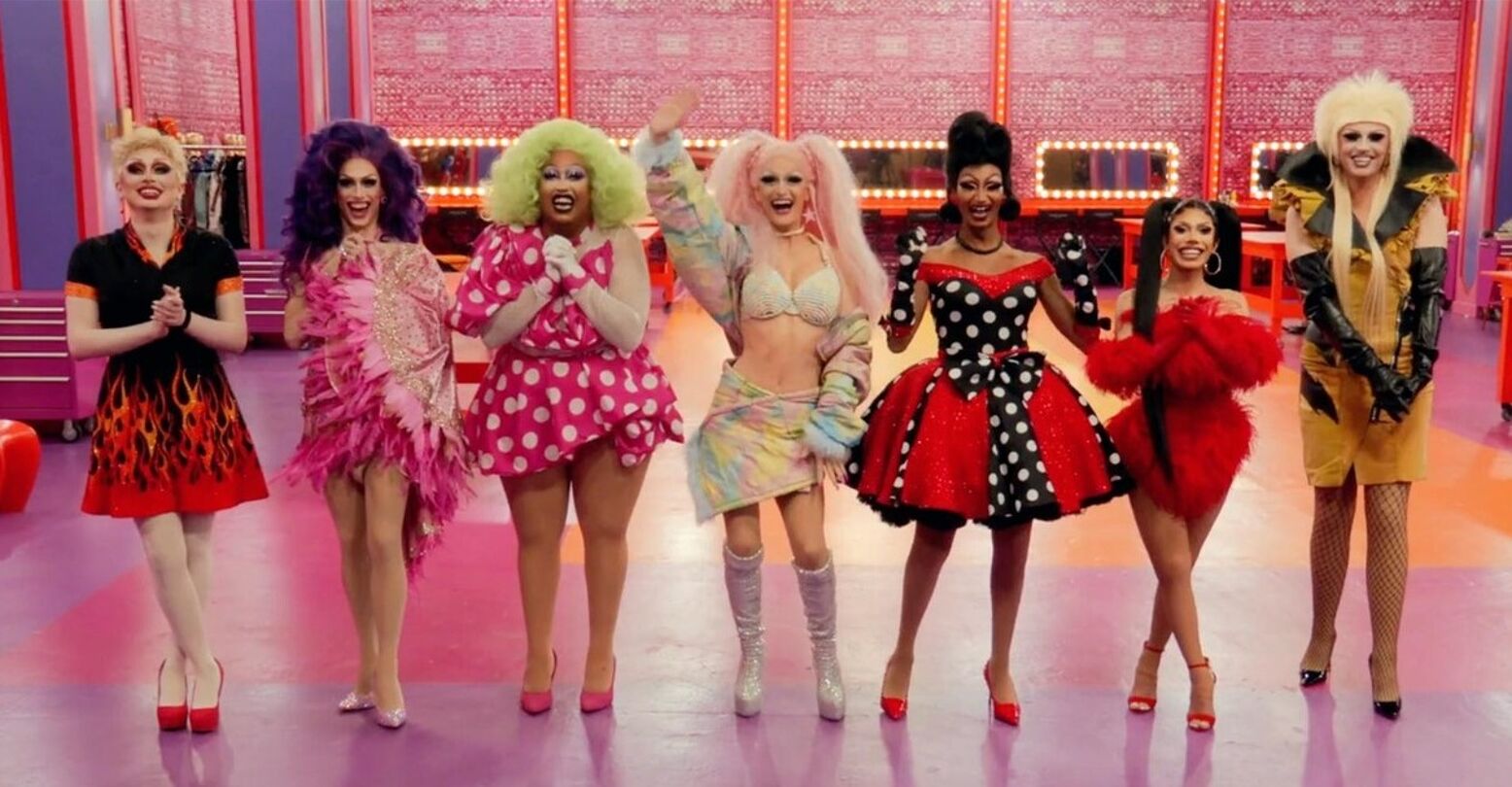 Welcome back to the INTO RuView, where we recap “RuPaul’s Drag Race” week by week. This episode, we met the remaining seven queens that round out the Season 14 cast and watched them compete in a talent show of their own.

First, the queens had to make an impression in their entrance looks — and not every impression was positive.

She said it herself: it’s gorgeous like Jorgeous. This hair, especially, is magical — is that human?? If so, Miss Jorgeous has BUDGET.

Angeria’s makeup always looks straight out of a cartoon, and this look is the perfect complement. Polka-dot perfection. She only misses the top spot because her hair got messed up almost right away.

Jem and the Holograms want what Daya has. I’m not crazy about the shape at the bottom, but this hair is to die for, and the overall aesthetic is killer.

Meh of the Week: Jasmine Kennedie

Jasmine is giving me different looks above and below the neck. But both look pretty good! I don’t think our aesthetics quite align, but I can’t deny that these pieces are solid.

It pains me to put this so low, because I’m OBSESSED with the concept. Maddy’s taking me straight to flavortown. But details like the lackluster wig and ghost white tights keep me from putting it any higher.

Lots of potential here! I think a candy bra could be sickening … if it were styled a little differently. And this wig is eating her up.

Nope. Sorry. Next. I don’t even understand what she was going for.

With all the queens in the room, Ru presents them with their first mini challenge: a photoshoot in a giant bowl of Tic Tacs! Almost everyone looks incredibly awkward, aside from Jorgeous, who arches her back on command, and Angeria, who doesn’t seem to have a bad angle. Angeria rightly wins the challenge! Apparently orange is her color.

Next, Ru announces this group’s maxi challenge, which is the same as the first episode’s: the Charisma, Nerve and Talent Show. I liked it last week, and I like it now.

Okay, time for a highlight of this episode. Miss Maddy Morphosis has become notorious for being “Drag Race”’s first cisgender, heterosexual contestant, something she hasn’t yet shared with the other queens. Which leads to the surreal but fabulous circumstance of RuPaul outing a queen on national television.

There’s just something so novel about a straight person trying to hide their sexuality. “Drag Race” is like that YouTube short film where the little girl is bullied for being straight — this one! Does anyone else remember this?? Core memory for me.

By the way, Alicia Keys is here! Behind a mirror. Guess being in the room with the girls wasn’t in her contract.

It’s time for the talent show! Jorgeous is up first, proving she’ll be a force to be reckoned with if she falls in the bottom. This bitch can MOVE. Her performance prompts RuPaul to shout “Yes, bitch!” no less than three times.

She’s followed by Jasmine, who’s also doing a lip sync number. I don’t like it as much as Jorgeous’, but it’s still solid, particularly that spinning jump into a split. Very clean! Very nice!

Next is Daya, who, unfortunately, is ALSO doing a lip sync number. The difference is Daya’s isn’t based on dance. But it’s not based on comedy either. It’s kind of … not anything? I was bored.

Lady Camden then graces us with a ballet number, done in stilettos. It’s maybe not the most exciting thing we’ve seen on “Drag Race,” but the technique is impressive, and her little faces are adorable. Between Camden, Jasmine and Jorgeous, we have some true dancing powerhouses this season. Here’s hoping for some legendary lip syncs!

DeJa’s up next with a comedic cheer routine. Well, “comedic” is generous. There are some funny moments, but if your talent is gonna be comedy, I need to be busting a gut from start to finish. It’s a miss overall.

Maddy takes the stage for an electric guitar number. She’s playing jazz, and at one point, she plucks the notes with her tongue. I know the straight jokes will get old quick, but come on — this is one of the straightest talents I can think of. Good on her for having a brand. As far as the actual talent, I liked this more than the judges! I understand it was a bit boring, but I’ll always prefer a rarer talent like playing guitar to something more common in the drag world like lip syncing.

Angeria is last, and she fully steals the show with an original song. Reveals? Check. Vocals? Check. What it takes to win this whole competition? Check.

This is pure pageant perfection, which is definitely signature Angeria. I think this is one of the most gorgeous gowns we’ve seen on this show, and though I usually prefer a conceptual look, there’s no denying that this is stunning.

Jorgeous also went the simple but beautiful route, and she wears it well. Is this ultimately just a bodysuit? Yes, but it’s bedazzled for the gods, and Jorgeous’ face card never declines.

She’s literally decapitated! We’ve seen a lot of Marie Antoinettes on this show over the years, but this is my favorite of the bunch. I know some people were reading this look for the shoes, but I honestly couldn’t care less. If I had to duckwalk down the runway (which, yes, is how Maddy pulled off this illusion), I’d want to be in flats too.

Meh of the Week: Daya Betty

I’m living for this look’s unique construction and primary palette. What I’m not living for is the massive rip in the back. I’m sure this is what Daya was planning to wear for this category, but with something as broad as “Signature Drag,” she really ought to have gone back to her luggage for a different option.

I think Camden looks super cute here. She’s a Y2K raver crossed with a white peacock. What’s not to like? Well, the shoes aren’t my favorite, and this rave aesthetic Camden keeps showing isn’t my personal cup of tea. But objectively, it’s not a bad look.

This look is also undeniably solid! But it’s really not up my alley. I’ve never cared for that slicked back pageant hair Jasmine is rocking, or for gratuitous nude illusion. It’s a solid execution of a look I just don’t jibe with.

Sorry to put you in last place again, DeJa, but this group had some strong runways! This busy fabric and bizarre hemline condemned you to the bottom of the heap.

Overall, though, where this group’s talent show may have been lackluster, its runways far outshone those from the first premiere. Really impressive showing all around.

Shockingly, I agree with all the judges’ critiques! It’s not quite clear who the tops of the week are — Jorgeous, Jasmine and Camden are all called safe — but Angeria is the clear winner! Just like Kornbread last week, Angeria snagged the win with an original song. Future contestants, take notes.

That leaves Maddy, DeJa and Daya as the bottom three. But Maddy’s talent and runway were the strongest of that trio, so she’s spared from the bottom. (But I would kill to see her lip sync in this look.)

That leaves DeJa and Daya to lip sync to “Fallin’” by Alicia Keys. C’mon, ballad! It’s been a while since we got a slow, soulful number like this for a lip sync. DeJa absolutely devours. I’m obsessed with how her movements perfectly match the cadences of the song. Daya, bless her heart, is putting up a good fight, but it’s not enough to save her from getting the chop.

Daya may not have lived up to the legacy of her drag sister Crystal Methyd, but she definitely still won the hearts of the audience. I would’ve loved to see more of her looks, though; her aesthetic was one of my favorites. I’ll just follow her on Instagram, I guess.

Next week, the two groups will finally unite and compete in a ball challenge! Lordy, that’s a lot of looks. But who am I kidding? I’m gonna eat it up.