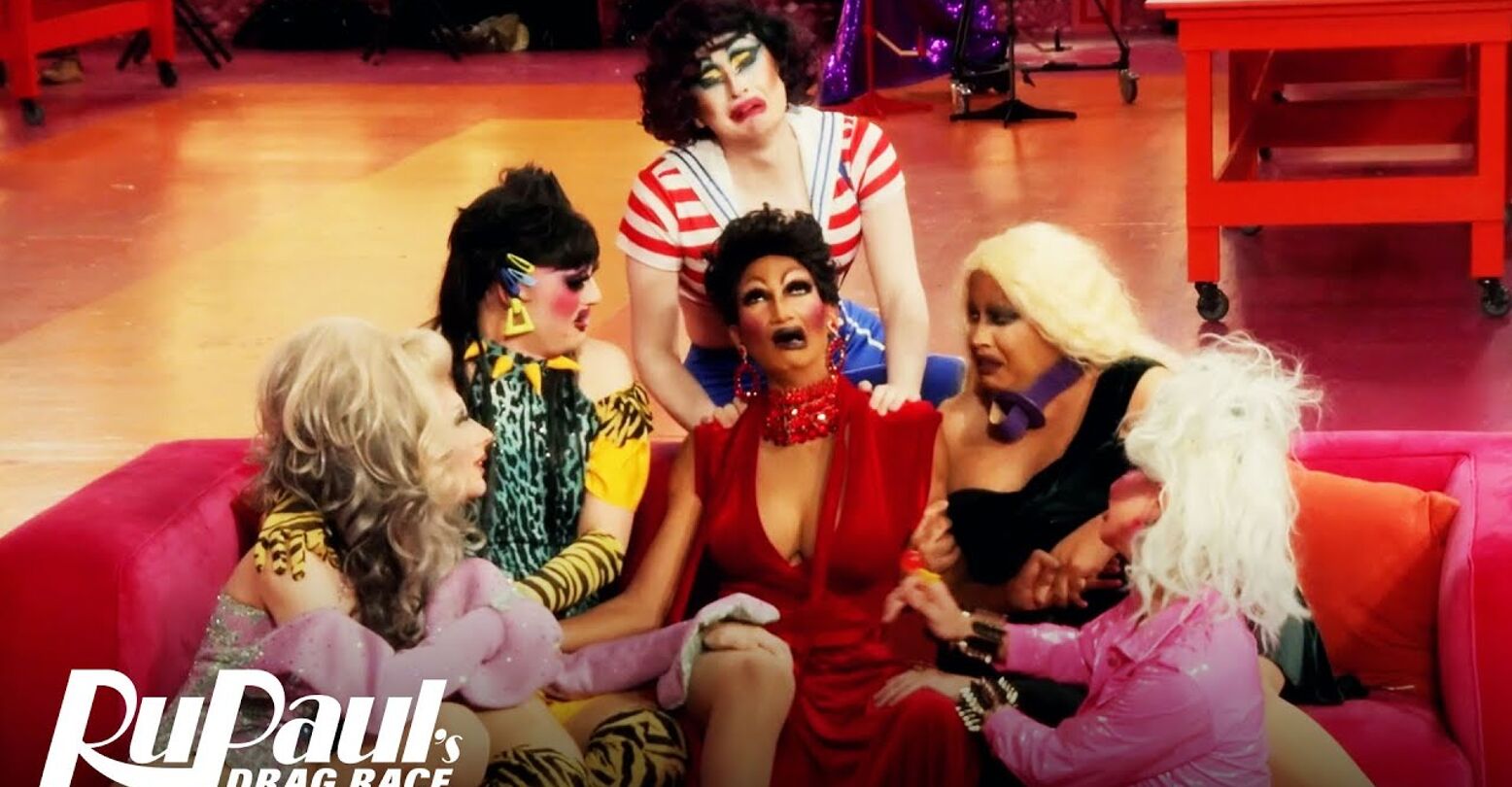 Welcome back to the INTO RuView, where we recap RuPaul’s Drag Race week by week. This episode, the queens got meta, making parody trailers of their own season of Drag Race.

The episode kicked off after June’s elimination, the first real elimination of the season. Immediately, we meet the star of this week’s episode: Jasmine Kennedie(‘s tears). She’s upset because she really, really wanted to win the ball challenge. I get it, it’s disappointing to not be in the top — but if you didn’t risk going home, I don’t think this level of tears are warranted. As Bosco said, and as Trixie Mattel said before her, “That’s a lot of emotion for safe.”

The next day, Jasmine keeps it up, positing that maybe there will be a ~second~ ball challenge! Girl. It’s getting desperate. Besides being an apparently sore loser, Jasmine will NOT shut up, which Kerri and Kornbread are quick to call her out for. Might Jasmine be a villain of the season in the making? Yeah. Yeah, almost definitely.

Ru comes in to tell the girls that this week, they’ll be creating their own super teases — extended trailers showing the juiciest moments of a Drag Race season. Loving this concept. For one thing, as a superfan, I love this kind of meta content. And I also love when this show gives creative control to the queens, because most of the time they’re much smarter about drag comedy than the writers.

The queens are doing a schoolyard pick for teams, a classic recipe for drama. As the top and bottom of last week, Willow and Maddy are team captains. Orion and Jasmine are the last two picked, with Jasmine being left as the least wanted. (Again: villain arc incoming!) She chooses to join Willow’s team because Kornbread is on it, and she wants to prove that she’s not actually annoying. That’s … quite a strategy.

During the planning phase, Alyssa and Jasmine stand out for the wrong reasons. Alyssa suggests that all the other girls make fun of her for being Latina? Which would definitely not come off very funny? Meanwhile, Jasmine once again pisses Kornbread off, this time by taking notes. Honestly, this felt a little unfair, especially because Kornbread then got mad at Jasmine for not taking notes. Jasmine isn’t my favorite queen, but I did feel a little sorry for her.

Filming is pretty uneventful. Jasmine is doing better than expected, Jorgeous is nervous as hell, Willow kills it as she literally always does.

This week’s runway category is Night of A Thousand J.Los. I’m only a fan of these runways when the celebrity has a metric ton of iconic looks, and J.Lo doesn’t quite qualify. There’s the one Versace dress … and yeah, that’s kind of it. But J.Lo does make an appearance on screen in the werkroom as the queens are getting ready, and though it’s clearly prerecorded, it’s still nice to see the girls get excited.

Category is … Night of A Thousand J.Los

I feel like a look that was so expensive in reality could easily come off super cheap when recreated, but Ms. Angie always looks expensive. She also chose a look that fits perfectly into her aesthetic — this is both signature J.Lo and signature Angeria. A perfect look for this category.

Alyssa is one of the only girls who did what I think this challenge demands: take an existing J.Lo look and not only replicate it, but elevate it. The look was great with the blazer, and even better without it with just the crystallized corset.

The judges seemed to like the changes DeJa made from the source material, but in my opinion, if you’re going to change a look that much, it has to be an elevation. And this is not elevated. The key elements of J.Lo’s version — the print, the harness, the hair — are all misses in DeJa’s version.

If your look is going to be almost entirely nude illusion, it really, really has to match your skin tone. Jorgeous’ doesn’t match, making the whole look a failure for me.

It’s time for the super teases! Honestly, they were both really solid as far as acting/improv challenges go on this program. Nobody was horrible, which is saying something! Willow stood out for her bizarre character, Camden’s take on being American was an inspired choice, and Angeria’s coining of the word “ug-a-lee” is already legendary. The standout moment of the whole challenge for me was DeJa’s emotional speech about being “born at a very young age.” Truly heartbreaking stuff.

The top three of the week are Willow, Angeria and DeJa, with Angeria claiming the win! I think I agree with the judges here — though I preferred DeJa’s individual performance, her runway was so much worse than Angeria’s that this was the only logical outcome. That makes Angeria the first queen of the season to get two wins, putting her in the frontrunner position. As she deserves! I’ll be shocked if she doesn’t at least make it to the finale.

The bottom three are Alyssa, Kerri and *gasp* Kornbread. Kornbread gets told that she needs to incorporate more levels, which I agree with, but it’s clear from her critiques that she’s in no real danger. Meanwhile, Alyssa and Kerri are left in the bottom two, meaning Kerri has to lip sync in J.Lo’s ACTUAL VERSACE DRESS. This rich bitch.

The two lip sync to “Play” by, of course, J.Lo. Now, we all know that Alyssa won this lip sync. Money gun malfunction or not, she ate this performance, serving face, body and dancing the house down. While Kerri … put up a good fight. So I was shocked that Ru called Kerri as safe and sent Alyssa packing.

I am torn here — I think Alyssa won the lip sync, but I don’t think Kerri should have been lip syncing. In my opinion, Jorgeous should’ve been there for a lackluster showing in the challenge and on the runway. But as it stands, Kerri should’ve gone home out of this bottom two.

And yes, Alyssa really is leaving — her bar is just chocolate. I crack up every time they play that little horn when the chocolate is revealed. Brilliant sound design.

Next week is a PSA challenge featuring some first-out queens of seasons past. I cannot express how excited I am to have Jaymes Mansfield back on my screen. She came in first for a reason!