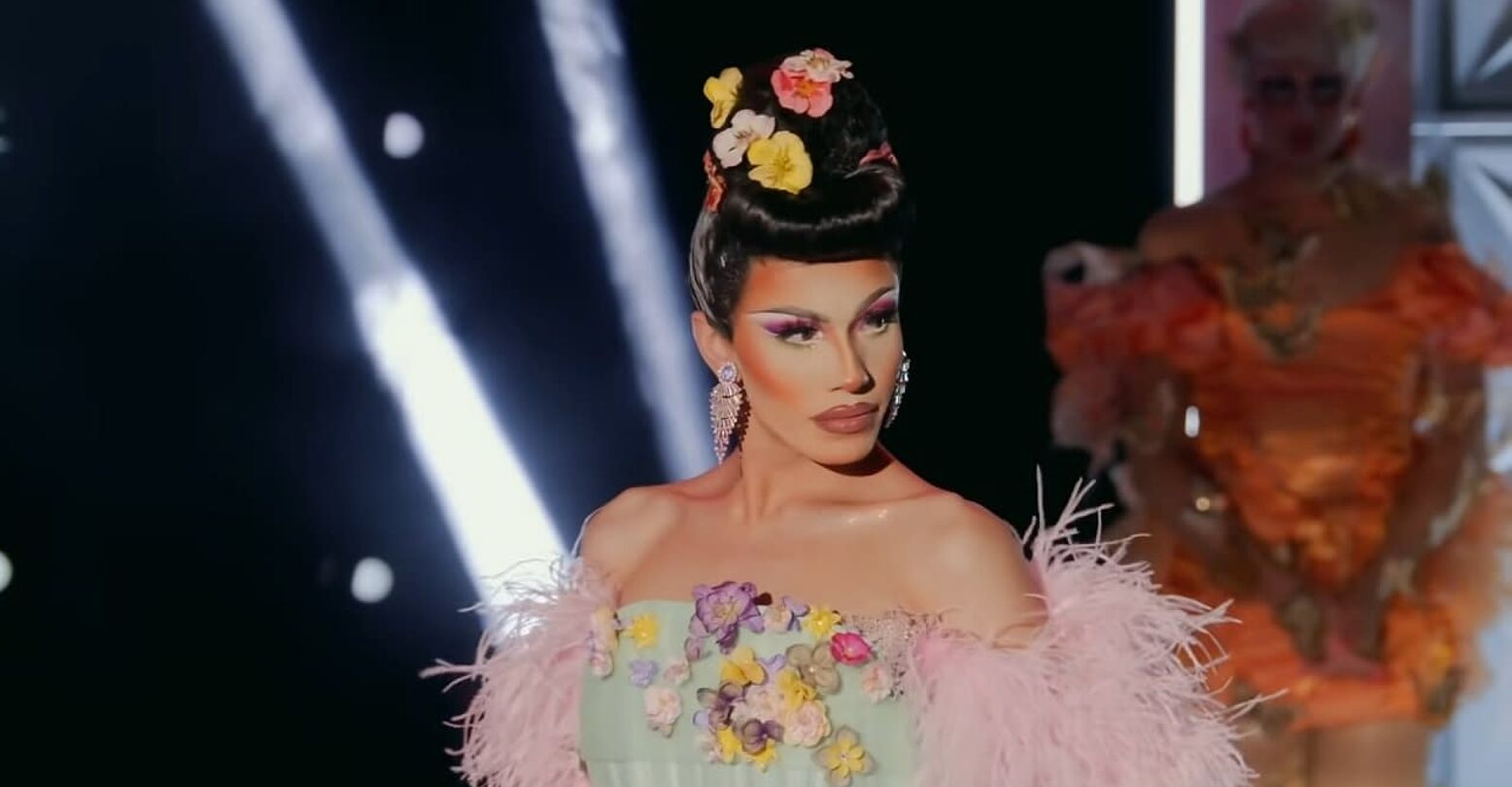 Welcome back to the INTO RuView, where we recap RuPaul’s Drag Race week by week. This episode, the queens produced tear-jerking PSAs for less fortunate divas, culminating in the birth of a lip sync assassin.

The episode opened with a heartbreaking discovery: Kornbread “The Snack” Jéte is out of the competition. Apparently she injured her ankle during last week’s acting challenge, I assumed when she rolled off that table. It feels like such a waste! Kornbread was on track to make it to the end of this season, if not win the whole thing. If she’s not on Season 15, the gays will surely riot.

The other girls look just as sad as I did watching it. But I’m sure some part of them is relieved — every other queen’s shot at the crown just got a whole lot bigger.

Welp, no use crying over spilled bread. Let’s get to the mini challenge! It’s not so much a challenge as it is team selection with extra steps, but those extra steps are very entertaining. Every queen has to grab a balloon, then thrust it against a pit crew member’s butt until it explodes with confetti — your confetti color determines your team.

This is the kind of stupid fun I love from Drag Race. Jorgeous being the world’s biggest bottom, Maddy’s conversion to homosexual, Angeria and Orion’s foursome. Good times all around.

With teams decided, Ru has one more surprise for the girls. Into the room step icons Tempest DuJour, Jaymes Mansfield and Kahmora Hall, the first-out queens from Seasons 7, 9 and 13! The teams have to make Sarah McLachlan-style PSAs advocating for these poor, unfortunate queens, one for each group. Kerri, DeJa, Angeria and Jorgeous are paired with Tempest; Maddy, Willow, Jasmine and Orion with Jaymes; and Camden, Bosco and Daya with Kahmora.

Another great challenge concept! It’s self-referential, giving underutilized queens a chance to shine, and, most importantly, it lets the queens write their own material. Maybe, just maybe, we won’t have to sit through a scripted acting challenge this season? We can only hope.

For some reason, all the PSAs have to rhyme. Did the Sarah McLachlan PSAs rhyme? It’s a bizarre added layer, but I’m not mad at it.

We’ll dive into the challenge performances, but first, it’s time for some runway.

Category Is … Spring Has Sprung

I may be a Maddy stan! I’m not ashamed to admit it! This isn’t the first storm cloud look to be on Drag Race, but it’s by far the best. This is the correct amount of fringe for a fringe-based outfit, by the way.

Willow is so goddamn creative it’s getting annoying. The “HELP” written in blood on the back? I think I want Willow to win the whole season at this point.

This isn’t horrible, but the details really throw it off for me. That includes the bizarre shape created by the fuzzy boobs and the mismatched wig choice. If you’re wearing pink lingerie, why would you go for stringy dip-dyed orange hair? Make it make sense.

Kerri did say she was going to break out “Scary Kerri” this episode, but I don’t think this is what the judges were looking for. Honestly, it wouldn’t be that bad, but the cheap ankle-length skirt really kills it. Did her entire budget go last week’s J.Lo dress?

Oh, and an honorable mention for the best dressed returning queen. They all presented their brands flawlessly, but Kahmora Hall just cannot be beat in terms of beauty. C’mon, Mackie doll!

It’s PSA time. Honestly, a very strong showing across the board! This is a super solid group of queens, and they’re proving it challenge after challenge. A few girls do stand out for the wrong reasons: Orion, for talking, y’know, how she talks; Jasmine, for being robotic; Jorgeous, for writing too much material and failing to deliver it. Oh, and not wearing lashes. NEVER a good idea.

Meanwhile, my favorite performances came from Bosco, Angeria, Willow and Camden. They really understood how to infuse their own personalities and play into the melodrama of the PSA format.

The official top placements go to Bosco, Camden and Angeria — yes, Angeria has yet to place below high this season. But the win ultimately goes to Bosco, adding another frontrunner to the board after Kornbread left a spot open.

The bottom three, predictably, are Jasmine, Orion and Jorgeous. When Jasmine is called safe, it’s clear that Orion’s story will be quickly cut short. Because Jorgeous’ knowing smirk says she’s about to destroy this song.

And destroy it she does. It’s “My Head And My Heart” by Ava Max, and Jorgeous hits every beat from beginning to end. Meanwhile, Orion’s bunny ears and shoes fall off as her wig slides back. It’s no contest. It’s fitting that Kahmora was here this episode, because it’s giving “100% Pure Love” from last season.

Jorgeous, of course, shantays, while Orion has to open her chocolate bar to reveal, womp womp, it’s just chocolate. Well, Orion already got one second chance this season, so it’s only fair that this time she really has to go.

With two girls having gone this episode, this season’s intensity is really ramping up. Next week is an unconventional design challenge, one of my favorite challenges to watch. I’m thinking Bosco, Willow or Angeria could snatch this one — and no, not just because they’re the only three challenge winners thus far. Because they’re simply fabulous.