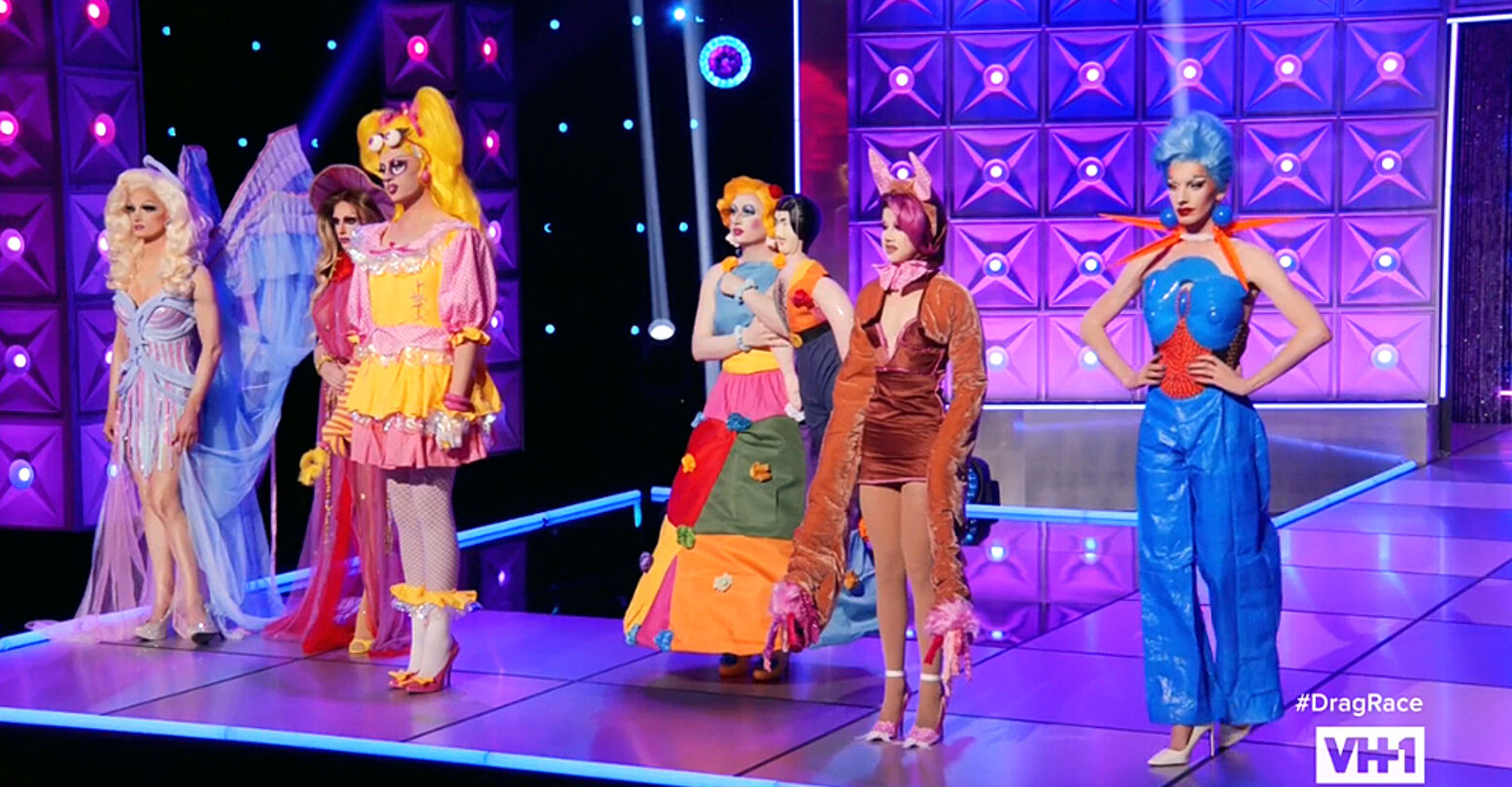 Welcome back to the INTO RuView, where we recap RuPaul’s Drag Race week by week. This episode, the queens created outfits from random online shopping detritus, leading to a win that’s, uh, QUESTIONABLE, to say the least.

The episode picked up after Orion’s murder — sorry, elimination — at the hands of Jorgeous. Jorgeous reads one line of Orion’s mirror message before deciding it’s too hard and giving up. Respect! Know your limits!

Jorgeous also whips out one of my favorite Drag Race-isms, saying that this lip sync “lit a fire under her ass.” Take a shot whenever a queen says this.

The next day, RuPaul wheels in a metric ton of “Glamazon” packages, the result of Michelle Visage’s online shopping addiction. With all these leftover products, may as well have a fashion show, right? Each queen has to make a high fashion look from these unconventional materials, and they’ll have to open the boxes to see what materials they have to work with.

It’s a little weird to have another design challenge so soon after the ball, but I’m here for it! It’s always cool to see what the queens can come up with on their own, especially from unconventional materials like this.

Now tell me why no one could help Willow open her damn boxes?? Could production not spring for a pair of scissors? Instead, she’s left scrounging for scraps. Like, I wasn’t worried about her performance in the challenge, ‘cause it’s Willow, but it would’ve been nice for her to have a fair shake at the materials.

Some notable moments from the queens’ time in the werkroom:

No use wasting time. This is a design challenge! Let’s talk designs!

This is simply gorgeous. Considering how long they had to put these looks together, the construction of the wings and the detail on the bodice are crazy impressive. Camden isn’t necessarily a look queen, but this was angelic. Plus, her lips look better! Thanks, Mama Ru.

Maybe a controversial pick, but I love a weird-ass design. Willow is both cute and creepy in this Freddy-Kreuger-meets-stuffed-animal monstrosity, and I could totally see this on an avant-garde runway.

More is less for Jasmine this week. From the dumpy crotch to the massive earrings to the hat-that’s-just-a-brim, this outfit desperately needed Coco Chanel to tell it to take one thing off.

Bless Maddy’s heart. This construction is just horribly awkward, and her storytelling, though admirable, did not come across on the runway. I mean, she had a whole blow-up doll to use, and all she did was carry it? There was potential! But the execution was not it.

Notice anyone missing from that list? Maybe Jorgeous, whose design wound up being perfectly safe in my eyes? Here it is — a nice enough dance costume, but nothing to write home about. Solidly in the middle of the pack, right?

Well, the judges disagree. Because their top three are Jorgeous, Camden and Angeria. Camden, yes, I agree. Angeria, sure! I thought it was a little boring, but undeniably well-made. But Jorgeous? I just don’t see it.

So imagine my confusion when Jorgeous was not only in the top, but WON THE WHOLE CHALLENGE. I really think was some kind of conspiracy to make the other girls jealous, because what the hell? People I think deserved to win over Jorgeous: Camden, Willow, Angeria, Daya and Bosco.

If the producers wanted to piss people off, they succeeded! I think Daya was about to explode, first when she was called safe, then when Jorgeous was announced as the winner. Verrrrry curious how Daya’s story will unfold in the next few episodes. She’ll either get a win and sail through the rest of the season, or this torture will continue until she spins out spectacularly. Either way, it’ll be great TV.

Meanwhile, the bottom three are DeJa, Maddy and Jasmine, with Maddy and Jasmine winding up in the lip sync. I agree on all fronts — maybe I would’ve put Kerri down there instead of DeJa. But this storytelling is next level considering how Maddy and Jasmine got into it in Untucked. I don’t usually dive into Untucked in these ruviews, but I just have to say: Jasmine is so iconic. I cannot wait for her to get into another fight.

Jasmine and Maddy lip sync to “Suga Mama” by Beyoncé. C’mon, budget! This is the first Beyoncé song to ever be used in a lip sync battle on the show, and it’s long overdue. Now, Maddy put up a good fight, in my opinion. But Jasmine was never losing this lip sync. When she and Jorgeous inevitably wind up in the bottom together, BUCKLE UP. It’ll be a lip sync for the ages.

When Maddy opens her chocolate bar, it’s just that: chocolate. So Maddy and Daddy Morphosis sadly have to sashay away. I actually loved Maddy this season. So what if she’s a straight man! Nobody’s perfect! I wish she at least made it to Snatch Game, but alas. Maybe on All Stars?

Next week is an acting challenge, which might be rough for this group. They’re not the strongest public speakers on average. That Jasmine/Jorgeous lip sync prophecy might even come true! And I, for one, can’t wait to lose my shit screaming at the TV.