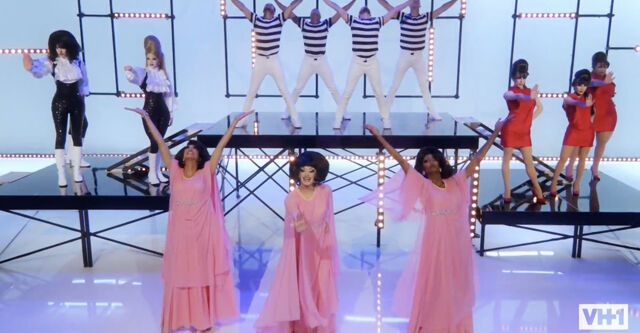 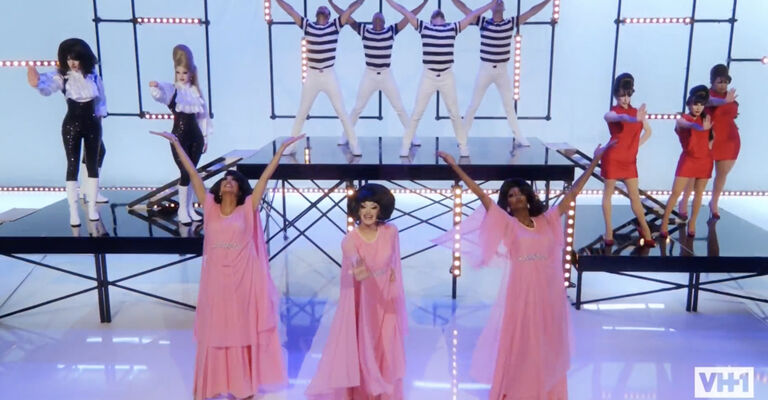 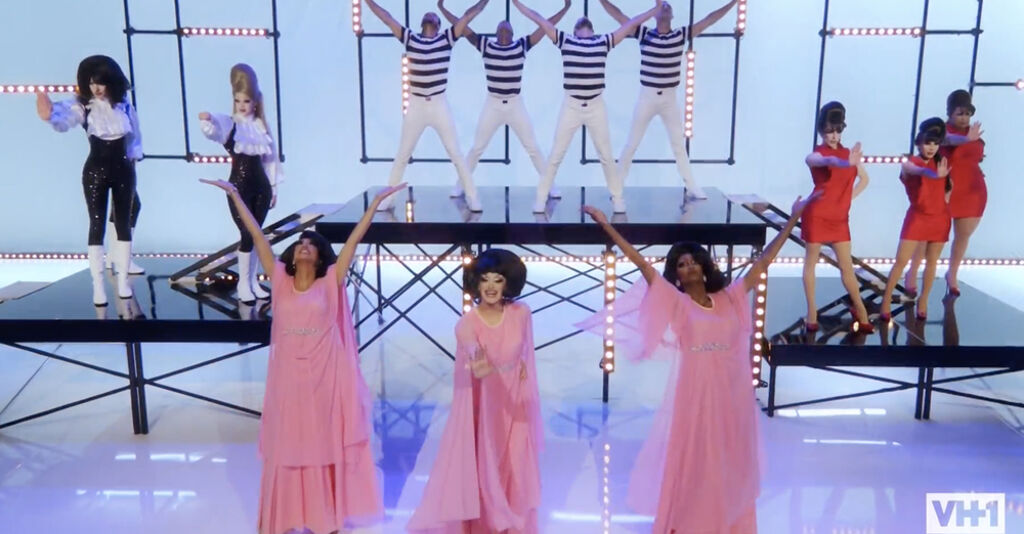 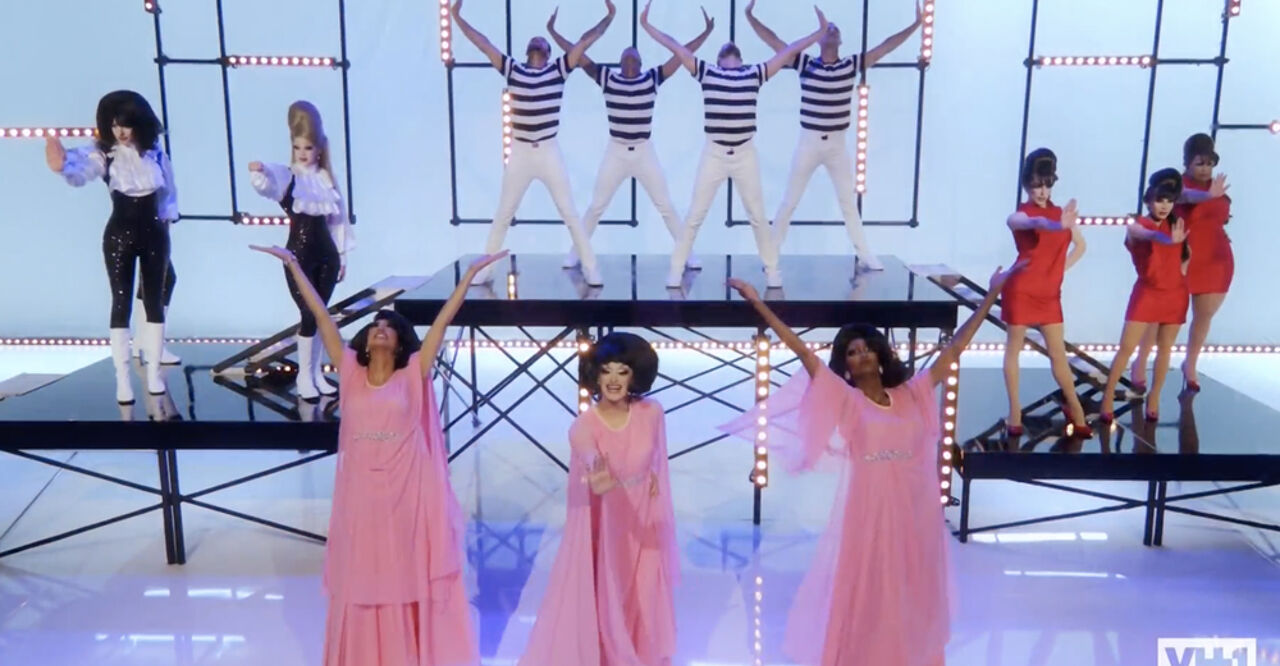 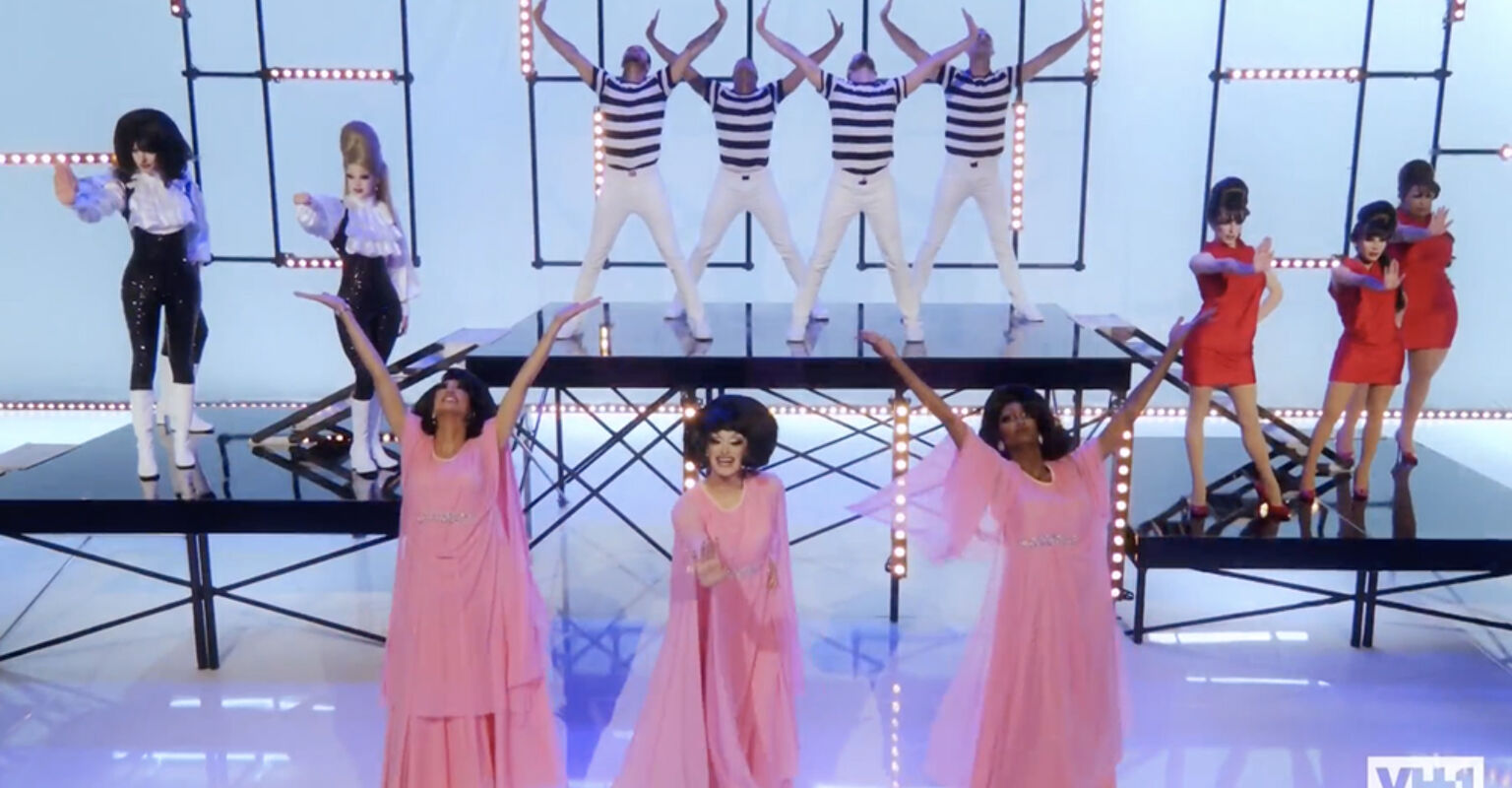 Welcome back to the INTO RuView, where we recap RuPaul’s Drag Race week by week. This episode, the queens sang and danced in ‘60s-inspired girl groups, but only one performer could reign Supreme. Get it? You get it.

The episode kicked off with one of the best reading challenges in Drag Race herstory. Seriously! This shit had me rolling. Here are my personal favorites:

I agreed with RuPaul — Bosco was the clear winner, with Camden as a very close second. But nobody fully bombed, so I’m looking forward to a roast challenge this season.

RuPaul reveals that he’s “setting the Drag Race time machine to 1964” for a retro girl group challenge. The queens will break into three teams — the Shang-Ru-Las, the RuNettes and the RuPremes — and they have to divide up the teams themselves.

Naturally, drama ensues. Daya, stubborn as ever, sinks her claws into the Shang-Ru-Las and makes it painfully clear that she won’t be letting go. It shakes out to a fight for the last Shang-Ru-La spot, and ultimately, DeJa gives up and joins the RuNettes. Now, if I were there, I’d be a touch annoyed, but it worked out for Daya, so I can’t blame her.

The groups end up as Daya, Bosco and Willow as the Shang-Ru-Las; DeJa, Jasmine and Jorgeous as the RuNettes; and Angeria, Camden and Kerri as the RuPremes. Through recording and choreography, the Shang-Ru-Las stand out as frontrunners. They’re the only ones with comedy in their lyrics and the only ones who don’t struggle to pick up the dance steps.

That trend continues when it comes to the performances. The Shang-Ru-Las are up first, performing “Bad Boy Baby.” Spoiler alert: this trio is far and away the best. Their lyrics are funny and original, their choreography is intricate and precise, and they even look the best! But production provided the outfits, so I guess they just got lucky on that front.

Next up are the RuNettes with their single “He’s My Baby.” This group is rough. Jasmine’s vocals are grating, Jorgeous’ face is dead and DeJa is … also there. And why weren’t they wearing earrings??

Finally, we have the RuPremes singing “My Baby Is Love.” I guess people in the ‘60s really had a thing for babies. Anyway, this group also missed the mark. Angeria is definitely the best of the group, giving a great Diana Ross, but no one knocks it out of the park. The choreo is somehow both overly simple and out of sync, and everyone’s makeup looks batshit insane. I straight-up could not recognize Lady Camden.

Category Is … Heart On

I’m obsessed with Bosco. I’m not ashamed to admit it. This vampiric all-white take on the theme stood out in the best possible way — she’s giving me the eldritch horror lesbian The Hunger vibes I am constantly hungry for. And I always live for an ass reveal.

No one can touch Willow when it comes to an original silhouette. An outfit made of panties?? Come on. Willow is walking proof that creativity is king when it comes to a successful drag look. Oh, and the ultra hot photoshoot she did with Season 13 fan favorite Denali doesn’t hurt.

The tea is that Bosco and Willow were the only two whose looks I actually enjoyed — Daya’s was also good, but the whole cast kinda dropped the ball with this category. Still, someone has to be at the bottom, so…

Again with the lingerie! This looks like a redux of her chaps look from last week … and her entrance look … and her Glamazon Prime look. Listen, I like Jorgeous, but I really need to see some more variety and ingenuity in her runways. And if you’re just gonna do lingerie, at least do it well. That off-color panty isn’t doing her any favors.

Unflattering undergarments strike again. The judges were right, that harsh line where Kerri’s fishnets end and her skin begins is super distracting. So is the black panty she chose to wear. And Kerri put her prop heart on the wrong side of her chest. It’s a perfect storm of confusion. Bless her heart — literally.

Considering how Bosco, Willow and Daya blew everyone else out of the water this episode, both on the runway and in the challenge, I think this would’ve been a perfect time to judge in teams. But instead, our top three this week is Daya, Angeria and DeJa. Color me confused — for me, DeJa and Angeria belong firmly in the safe camp this week.

And the bottom three are Kerri, Jasmine and Camden. I’m just amazed that Jorgeous made it through this week scot-free, but given the favoritism she’s already been getting this season, I guess I shouldn’t be surprised.

The winner is … Daya Betty! It’s her first win of the season, and frankly, I’m excited to see a season’s villain in a frontrunner position. It’s so much more dramatic! Plus, Daya did deserve it. Her runway and performance were both great, though personally, I’d have given the win to Bosco.

And Kerri and Jasmine wind up as the bottom two. Honestly, heartbreaking considering the connection we saw between them in last week’s Untucked. Luckily, the lip sync song is here to “Un-Break My Heart.”

Neither of them fully kill it, but Jasmine’s one-shoed performance is weirdly impressive, especially considering how other girls in this season have simply gone shoeless. I also feel like Jasmine has more to show than Kerri, so I was glad for her to get the shantay.

For the first time, the girls in the back are actively rooting for the eliminated queen to get the gold bar. But alas, Kerri just has chocolate, and she really does have to sashay away. She may not have won Drag Race, but Kerri will go down as one of the most gorgeous queens to ever grace the franchise.

Next week, we’re getting a DragCon challenge! I do enjoy the public speaking challenges, but seriously: where is Snatch Game? What do I have to do to get some Snatch around here??