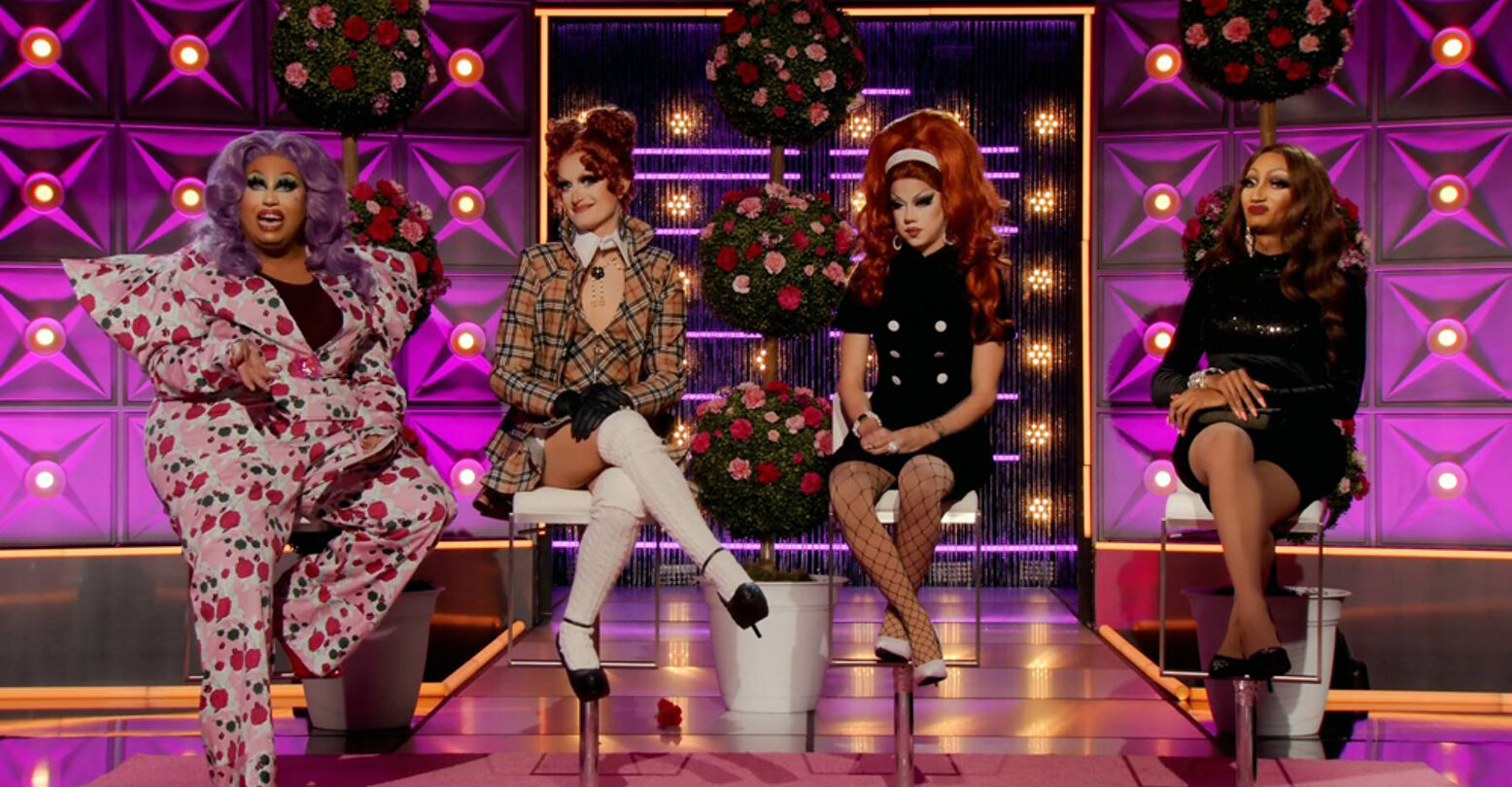 Welcome back to the INTO RuView, where we recap RuPaul’s Drag Race week by week. This episode, the queens hosted DragCon panels on everyone’s favorite topic: men.

The episode picked up after Kerri’s elimination, where it became clear to me that Ms. Colby will be snatching this year’s congeniality crown. The other girls adore her, as they should! Anyone with any common sense stans Kerri, the Thanos of drag. (Congrats to Willow Pill on coming out as trans femme, by the way! This is the transest season ever, by a long shot.)

Well, since u brought it up baby 💖🥰 pic.twitter.com/BCkMXVQprS

The next day, the queens compete in a photobomb mini-challenge, posing with the world’s most famous men. From the looks the queens chose, you’d think this was a club kid challenge. Willow is the most entertaining, showing that she can apparently stand upside-down on her forearms?? All while dressed as a washed-up Olympian. No surprise, she wins the challenge.

That means Willow gets to choose her own team for this week’s challenge: creating DragCon panels all about men that strike a balance between comedy and realness. Willow opts for DeJa, Angeria and Camden. Definitely a strong team, but I’m shocked she didn’t choose Bosco or Daya considering how much they’ve already worked well together.

Meanwhile, Bosco, Daya, Jorgeous and Jasmine make up Team Leftovers. It’s immediately not looking great for this group. Jasmine and Jorgeous have shown time and time again that they’re not excellent public speakers, and it wouldn’t be hard for them to drag Bosco and Daya down with them.

Each team has to choose a moderator to run the panel. Team Willow quickly chooses DeJa, while Team Leftovers first has to explain what a moderator is to Jorgeous. Jasmine then volunteers to take the role, which Daya immediately shuts down. Bosco takes the role instead — it’s definitely a better choice, but damn, I feel for Jasmine. This group has no faith in her.

Quick shout out to this week’s guest judge, Nicole Byer, who is always a pleasure. Her reaction to LaLa Ri’s bag look still lives in my head rent-free.

First up in the challenge is Team Willow. Everybody kills it! DeJa seamlessly weaves everyone’s answers together, Angeria’s southern charm is on full display and Willow’s quick wit is unstoppable. “I’m an anarchist who feels men should be punished for their crimes against the world, but I do find them very attractive,” she says. So true.

Camden is probably the weakest on this team, accidentally saying she has a crush on Blake Lively instead of Blake Shelton. But who could blame her? Blake Lively transcends sexuality.

Team Leftovers is next, and Bosco kills it right out of the gate, delivering the best soundbite of the episode.

“When I think of men, so many questions come to mind. Questions like, why? For what? And, honestly?”

Despite Bosco delivering some of the biggest laughs of the whole challenge, the rest of her group is seriously struggling. Daya is perfectly passable, if pretty boring, while Jorgeous keeps tripping over her words and Jasmine is somehow saying too much and not enough. I know Bosco’s back is HURTING after carrying this team.

DeJa is the only one who got the point of this category. You’re drag queens with the assignment “shoulder pads,” and only one of you thinks to play with silhouette like this??

Even if the rest of the category was disappointing, DeJa absolutely devoured. This jacket is everything to me, and this is my favorite DeJa look yet.

Willow undeniably looks super cool. This hair, stoned suit and sock garters are all fashionable as hell, and I want all of them in my closet. But those shoulder pads could be about 10 times larger — that’s what’s keeping her out of my top spot.

I appreciate Angeria’s attempt at mixing patterns, but it didn’t pay off. Mixing these houndstooths just looks overly busy. But what really drags this look down is that unlined train. Angeria, you’re better than this!

Lots of people missed the point of this category, but only Jorgeous failed to wear any shoulder pads at all. Babe. Those are puff sleeves! She can’t keep getting away with not meeting the category!! But I admit, the hair is to die for.

This week’s top three are Bosco, DeJa and Willow. Absolutely agreed. These three were the strongest across the board, though Bosco’s runway was definitely disappointing. Combined with the fact that her group did better overall, that’s why I would’ve given the win to DeJa, not Bosco. Plus, I think DeJa’s gonna lose her mind if she doesn’t get a win ASAP.

But instead, Bosco scores her second win! I’m not mad, I live for Bosco. I’m just not sure this was her week.

Meanwhile, the bottom three are Jasmine, Jorgeous and Daya. Is anyone surprised? The rest of the episode plays out exactly how you’d predict. Jasmine and Jorgeous wind up in the bottom two, ready to give us the lip sync battle we’ve been expecting from them all season.

They face off to “Something’s Got A Hold On Me” by Etta James, not a super danceable song for two talented dancers. But I really appreciated getting to see a different side of their performance styles. The moment where they did backbends to the “Oh!”s in unison had me screaming, and they both proved why they’re lip sync assassins.

If I had to pick a winner, I’d personally choose Jasmine. I think she gave better face, and her slow split was perfectly timed. But I’m not mad at the double shantay Ru issues out here; Jorgeous was also fabulous.

But it does mean this season is starting to drag, just a little. Knowing that there’s still another non-elimination episode to come with the chocolate bar, I just hope this season can keep up its momentum. Because it is a really strong season! Let’s hope it doesn’t overstay its welcome.

We’re still at a top eight, so of course, next week is finally Snatch Game! I’m hopping Willow and Bosco can impress me with their wittiness once again, or that DeJa can snag her first win. And despite this double shantay, I don’t think Jorgeous and Jasmine are long for this world.