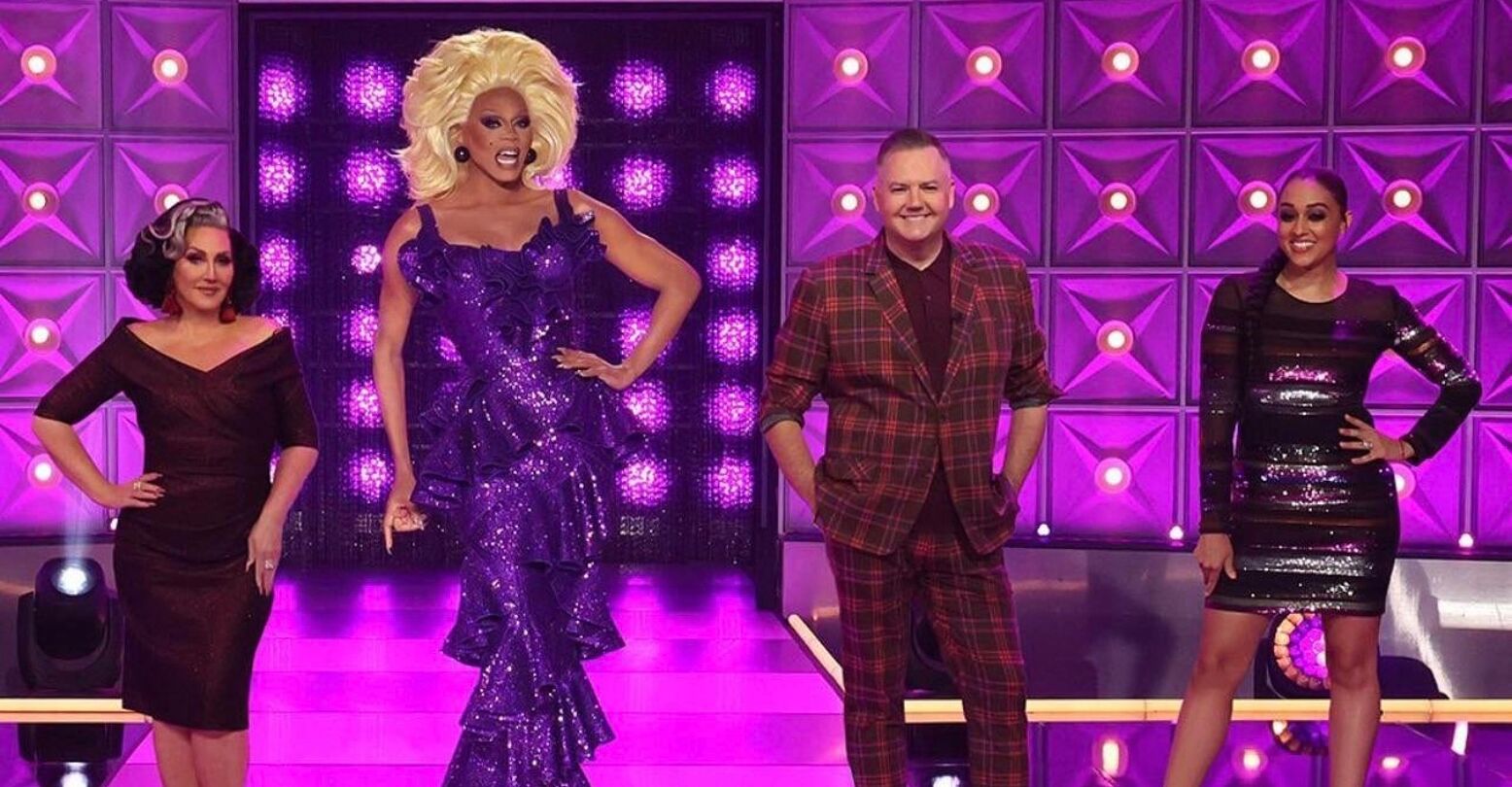 Spoilers for RuPaul’s Drag Race All Stars Season 6 Below!

Welcome back to the INTO RuView, where we recap “RuPaul’s Drag Race” week by week. The third episode of All Stars 6, “Side Hustles,” saw the queens tackle the staple commercial challenge, culminating in a truly unforgettable lip sync and a heartbreaking goodbye. Let’s dig in.

The episode opens with the queens returning to the werkroom after Jiggly’s elimination. Kylie reads the group’s votes aloud (“We have one for Jigg-i-ly, we have two for Jigg-i-ly…”), revealing nine votes for Jiggly and two for Yara. One came from Jiggly, and the other from Trinity. This, of course, follows Yara choosing Trinity’s lipstick the previous week, though Trinity denies that that’s the reason for her choice. Do we smell a rivalry forming, perhaps?

The group is greeted the next day by Jiggly’s lipstick message, where she wrote, “You may call me Jiggly.” A sentiment the queens immediately ignore by screaming her out-of-drag name, Bianca. Still a cute moment, even if it proves they can’t follow directions.

As the queens wait for Ru to come in, Silky imagines what their next challenge might be: Ru-hovah’s Witnesses, handing out pamphlets to the community. An incorrect guess, but frankly a wonderful idea that RuPaul should steal.

RuPaul reveals that this week’s challenge is actually to create a commercial showcasing the queens’ side hustles. They’ll be working in teams — now, team selection often goes sour on “Drag Race,” as when they’re arbitrarily assigned, it can stink of producer riggery. But this time, teams are chosen by height: the shortest girls (Ginger, A’keria, Jan and Silky), the tallest girls (Kylie, Scarlet and Eureka), and the mediumest girls (Trinity, Pandora, Yara and Ra’Jah).

First up to film are Trinity, Pandora, Yara and Ra’Jah, who were told to be Drag Fixers — drag handymen, essentially, but for literally any problem. Ra’Jah’s look is eerily similar to her Season 11 promo look — just a little easter egg for us fans, I guess?

The whole group does a good job, but Trinity is definitely a scene stealer. I could watch the scene of her showing off her cliffhangers on loop.

Next up are Kylie, Scarlet and Eureka, who were given the prompt of Drag Exorcists, because why not? When they were preparing, Eureka and Scarlet seemed keen to rely on improv, which Kylie was rightfully wary of. IMPROV IS NEVER THE MOVE IN THESE CHALLENGES. Did Nina and Tina teach us nothing?

The actual shoot goes … okay. Kylie and Scarlet do perfectly fine, while Eureka stands out as a dragged-up Linda Blair, actually breaking the headboard of the bed she’s using. It’s okay, girl, we’ve all been there.

Last to shoot are Ginger, A’keria, Jan and Silky, who are offering a Rent-a-Queen Service, or RAQ, for short. A’keria is stumbling over her lines, Silky is nervous about her lack of screentime, and the whole group seems to have planned way too much for a 45-second commercial.

“Is it all gonna fit?” asks Michelle Visage.

“With poppers,” replies Jan. We’ll see about that.

While filming, Ginger busts out a robe printed with Jan’s infamous face-crack from Season 12. Rosé wore the same robe during the commercial challenge on Season 13, which she won. Maybe they were hoping to channel that winning energy.

As the queens get ready for the runway, as per usual, there’s an emotional moment in front of the mirror. This time, Silky gets the spotlight to reflect on the hate she faced after Season 11.

Let this be a lesson to the audience: it’s perfectly okay to have opinions on the queens (I mean, here I am, writing a whole review), but there’s never any excuse to send them hate. These are real people with real emotions and real careers, not just the characters we see on our TV screens. The hate Silky received made her scared to show her true self on this season, which was ultimately her downfall this episode. Just be nice, or at least be quiet. It’s not that hard.

It’s time for the runway, and this week’s theme is one of my favorites: Rudemption. The queens get to redo their worst look from a previous season. This runway has only been used once before, on All Stars 3, but it should absolutely be a staple. I’m so happy they brought it back! Here are my top and bottom looks of the week.

Scarlet rudeemed her Season 11 entrance look, which incorporated the same Renaissance print but to much less effect. Here, she looks like a literal goddess. And she’s actually wearing makeup!

Kylie revamped her Season 2 Snatch Game look as Lady Gaga. Then, she was giving bootleg Fame Monster. Now, she’s giving Chromatica down. The glasses with “TRUST,” a reference to Kylie’s catchphrase in that Snatch Game, are the cherry on top.

Well … it’s better than the original. That much ruching isn’t flattering, period, and the crown mask, while a cool concept, seems to have prevented Ginger from putting on lashes. You can’t walk the runway without LASHES. Come on!

This isn’t horrible, it’s just pretty blah. The silhouette is nothing special, and the green detailing seems like an afterthought.

At last, we get to see the completed ads!

Kylie, Scarlet and Eureka, the Exor-Size Queens, had a cute commercial, though it felt a bit too narratively driven to actually be an ad. Eureka also completely stole the show from Kylie and Scarlet, who both need to come out of their shell just a little bit more to secure more top placements in this competition.

Trinity, Pandora, Yara and Ra’Jah absolutely kill it with their slogan of “FIX IT BITCH.” Having drag queens only know how to fix things with duct tape was a stroke of comedic genius (and painfully relatable). The standout, thought, was Trinity’s deadpan performance and dissatisfied reactions. What a comeback from her struggles with acting challenges on Season 6!

Finally, Ginger, A’keria, Jan and Silky show off their escort service, RAQ. The final ad isn’t horrible, but even with poppers, there was simply too much jammed in, with not enough laugh-out-loud moments to justify it.

The judging is, in my opinion, entirely correct, which is a rare occurrence on “Drag Race.” The Drag Fixers are the winning team, with Trinity snagging the overall win. As she should. The Exor-Size Queens are safe, while all of RAQ is up for elimination.

Upon returning to the werkroom, Ginger immediately congratulates Jan, “for breaking her safe streak.” Shady! The bottom girls then start pleading their cases, making no attempt to congratulate Trinity on her win. Which, understandably, pisses her off. Who doesn’t want their flowers when they do a good job? Still, I have to say she was a little overdramatic.

“I don’t know what it feels like to win! That was a first for me! So please understand where I’m coming from,” she said, prompting Ra’Jah to instigate a cheer for Trinity. Was it entirely genuine? Maybe! Or maybe they just wanted to appease her.

The moment did provide us with this top-tier reaction image from Ra’Jah, so it’s a net positive in my book.

Trinity then launched into an emotional speech:

As she meets with the bottom queens one by one, Trinity assures all of them that “they’re good.” But ultimately, she has to choose somebody, so she’s lying to one of them, right?

After all the girls cast their votes, they return to the mainstage to meet this week’s lip sync assassin. But the curtain rises, and nobody’s there. Until we hear perhaps the best entrance line of all time: “Oh, y’all wanted a twist, eh?”

YES! It’s Laganja Estranja, who then performs a JUMP SPLIT and says, “C’mon All Stars 6, let’s get sickening, okurr?” Oh, and this is all before the lip sync even starts. My life is now complete. Best moment of the season so far.

Trinity could see the writing on the wall — she wasn’t about to win this. “That first stunt don’t count,” she says.

The music starts: it’s “Physical” by Dua Lipa. That marks the third season of “Drag Race” this year to feature a song off “Future Nostalgia” — at this rate, they’re going to perform the whole album, and I’m not mad at it. I’m a proud Dula Peep stan, thank you very much.

The lip sync is jaw-dropping. Trinity is a fabulous lip syncer, but she can’t keep up with Laganja’s fully choreographed routine, chock full of stunts and reveals. Now that is how you assassinate a lip sync!

Laganja wins, naturally, and reveals the group’s vote: Silky. It’s heartbreaking to see her go, especially after her earlier speech about receiving hate. Luckily, I think Silky has more than redeemed herself this season, and I hope her fanbase will only continue to grow from here. Plus, who knows? Maybe she’ll take advantage of this mysterious “game within a game” and return down the line.

Next week is a Superbowl-themed rusical — I mean, Jesus, if Jan, the queen of sports and musical theater, doesn’t win, I think she might literally explode. I’m still team Ra’Jah for the overall season win, but I hope that queens who are being less favored by the edit right now, like Pandora and Scarlet, are able to shine along the way. Till next time, stay sickening, and watch out for Laganja — can’t be too careful when there’s an assassin on the loose.