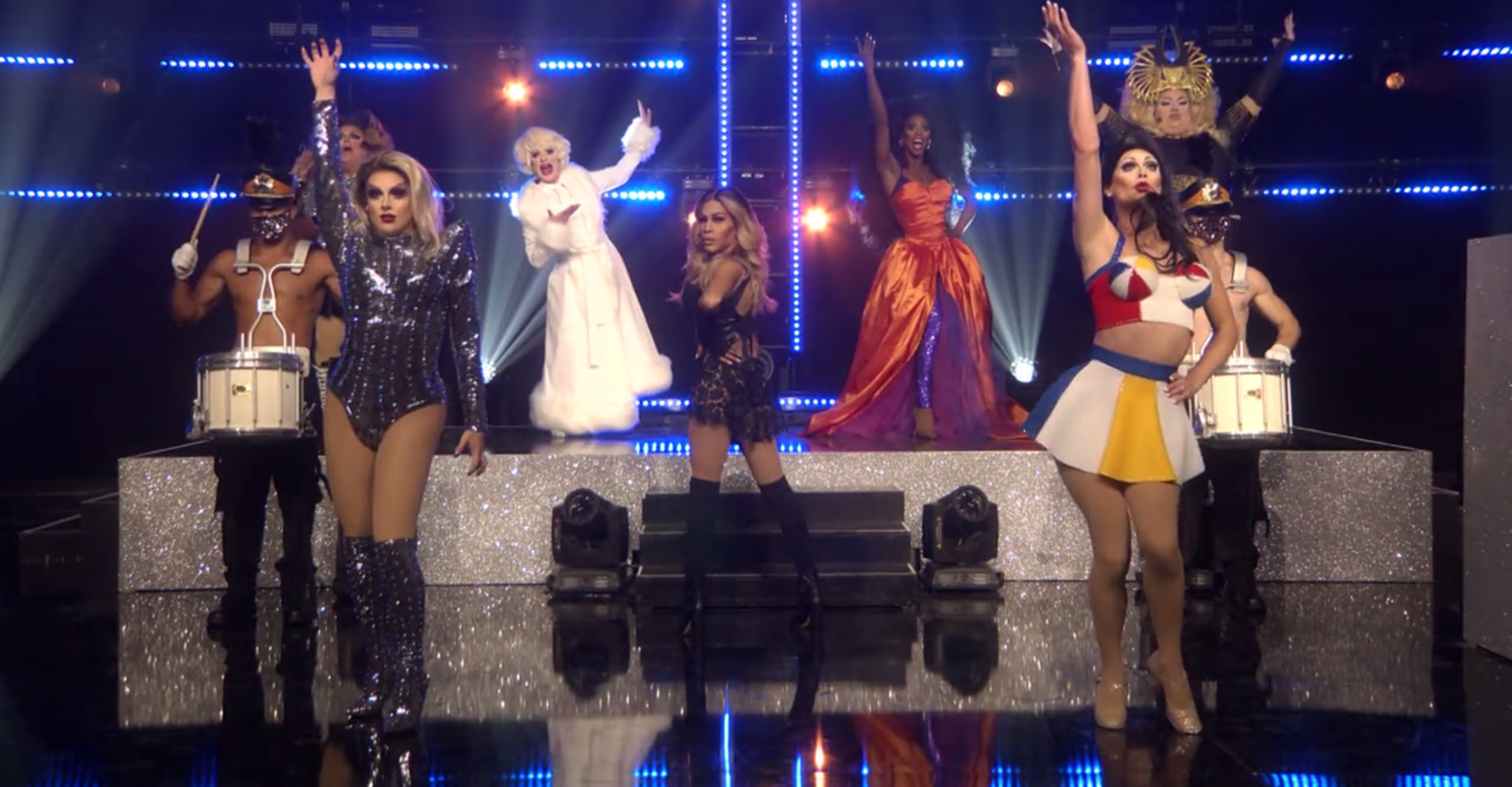 Welcome back to the INTO RuView, where we recap “RuPaul’s Drag Race” week by week. The fourth episode of All Stars 6, “Halftime Headliners,” is themed around … sports?? A football game of some sort? What a rich cultural exchange.

When the queens return to the werkroom after Silky’s elimination, Pandora finally gets some screen time when she reads out the votes. It’s the closest elimination yet: four votes for A’keria and six for Silky.

Eureka, Ginger and Ra’Jah all admit to voting for A’keria, which, sure, but wouldn’t it be fun to be a little more shady?? Sow some chaos by leaving it a mystery?? I know they’re sisters, but it’s also reality TV and I would be amused.

The girls return the next day to find Silky’s mirror message: “#AllBlackLivesMatter #TransLivesMatter.” I really did miss her presence this episode — I’d love for her to make a comeback.

Jan seems to have selectively listened to her bottom critiques last episode: “I don’t think that mine or Ginger’s critiques necessarily warranted us to be lipstick-eligible,” she says. Hey, who likes a drag queen that isn’t at least a little delusional?

Ru comes in and announces that this week’s challenge is an homage to iconic Super Bowl Halftime Show performers — except, he doesn’t say that, because clearly they weren’t allowed to say Super Bowl. Instead, this episode is full of references to “the big game” and “sportsball.” Camp.

One thing this season is getting correct is stepping back from overproduction. When the show’s done this kind of challenge in the past, the queens have been assigned roles/celebrities to portray, dooming queens to bottom placements regardless of their performances (#JusticeForThorgy). But this time, the queens were apparently allowed to choose whatever Halftime Show performer they wanted from the tradition’s 50-year history. So, if they chose a boring performer, it’s on them instead of on production, which feels much more fair. Of course, it’s still “Drag Race,” so the producers are gonna meddle — just a little bit less than they usually do.

A few of these choices stand out. First, A’keria and Kylie are both portraying men, which is becoming increasingly common on “Drag Race,” especially during Snatch Game. Clearly, the judges and producers can get down with male-presenting drag — so why have we never seen drag kings on the show?? Or even on a spinoff? Seriously. It’s well past due. Drag kings are just as talented as queens, and a platform as large as “Drag Race” should be doing its part to elevate them to the same level of notoriety. Make it happen!

Next, Trinity as Beyoncé. Beyoncé has been portrayed three times on “Drag Race,” all of them during Snatch Game, by Tyra Sanchez, Kenya Michaels and Asia O’Hara. All three performances are legendarily bad. Not to mention that during her original season, Trinity was called out by Bianca Del Rio for not being a good Beyoncé impersonator: “Trinity looks more like Sammy Davis Jr. in a Beyoncé wig.” Trinity says she’s here to “break the Beyoncé curse.” Here’s hoping, because Beyoncé absolutely deserves to be done right.

Finally, Eureka’s choice to do Madonna is dredging up some bad memories for Jan. Who could forget her infamous face crack after narrowly losing the Madonna Rusical on Season 12? Not me. I can’t. She’s clearly out for vengeance, in the form of a killer Lady Gaga impression.

At this point, we get the best moment of the episode: just Scarlet chilling in a Left Shark costume while listening to other queens’ issues, and nobody acknowledging it. I said it once, I’ll say it again: camp.

The queens head to dance rehearsal with choreographer Jamal Sims, who is: hot. Not much to report on here — Trinity is killing every Beyoncé-ism, which comes as no surprise given her history of Beyoncé impersonation. Yara is apparently a Shakira purist, as she keeps arguing with Jamal about the inaccuracies of the moves. Doesn’t bode well.

As the girls get ready for the performance, we see a cute getting ready moment between Trinity, Ra’Jah and A’keria, both about their upcoming Halftime numbers and, for the second time this season, if Trinity qualifies as trade.

“I don’t give a damn how much pubic hair you put on your face. I’m never calling you trade,” A’keria says. It’s honestly just so fabulous to see the joyful side of drag, because All Stars especially can get bogged down in the sad fact of eliminating your peers. More moments like this, please!

It’s especially lovely to see Trinity exuding positivity, because in her original season, she was constantly down on herself.

“On Season 6, I didn’t take the initiative to build friendships. This time around, I came in here with the mindset that I am going to make friends, so that when times get rough, we will have each other to fall back on,” she says. “It means the world to have that.”

On the runway, RuPaul looks impeccable. Like, certainly the best she’s looked this season, and maybe a few seasons before that too.

Before I really get into it, I just want to say that this challenge and runway prove why this is shaping up to be one of the best seasons ever. Nobody flopped in either category. These are ALL. STARS. But, there do have to be tops and bottoms.

To me, there were a clear top two performances: Jan and Trinity. Jan’s embodiment of Gaga was top-tier, and she nailed the “Stupid Love”-esque choreo. Trinity WAS Beyoncé. Like, she just was. That was so impeccable.

Kylie and Pandora were also standouts to me! Kylie’s Steven Tyler was a perfect embodiment of rock’n’roll frontmen who ride the line between masc and femme, while Pandora’s reprisal of her Season 2 Snatch Game character in musical form was a brilliant change of pace from the other queens.

At the bottom of the heap, unfortunately, were Yara and A’keria. Yara’s Shakira had hips that didn’t lie, but a face that could rival Pinnochio. You could tell how hard she was focusing on the dancing (which she did kill!), but it took away from the overall performance. A’keria, meanwhile, wasn’t bad by any means, but she didn’t nail Prince’s mannerisms. At least she proved her ass is, indeed, almighty.

Category Is … The Frill of It All

Okay now BITCH. This was stunning from head to toe. And it was a spectacle. And it had a reveal! Literally what more could any “Drag Race” stan want? This absolutely should’ve kept her out of the bottom.

This color scheme and concept just scream winner to me, particularly when contrasted with the pastels and bright colors most of the other girls brought. And the makeup is stunning. To me, this pushed Jan to the win over Trinity.

Call me crazy, but I don’t see any frills on this outfit? I mean, it’s definitely flamboyant, but I mean frills as in “a strip of gathered or pleated material sewn by one side onto a garment or larger piece of material as a decorative edging or ornament” — thanks, OED. She looks nice, but I think this fully misses the boat on the category.

The judges were living for this, but I wasn’t. Sorry! The flimsy shiny cowboy hat just really drags this down. Also not a bad look! Just not as good as the others.

The tops of the week are Jan, Trinity and Eureka, and the bottoms are Ginger, A’keria and Yara. Personally, I would’ve swapped Eureka for Kylie, all things considered. The bottom three I agree with, but when it was narrowed down to a bottom two, I would’ve put Ginger there instead of A’keria. That runway was just too good.

But! I am not in charge. Jan wins the challenge! I agree, even if it does feel a little forced given her iconic near-win in the last musical. Oh well. Still happy for her! And we wind up with a bottom two of Yara and A’keria. It’s almost correct — but, once again: oh well.

During deliberations, the group runs into a dilemma: Yara has objectively done better than A’keria in the competition so far, but A’keria is fighting so much harder to stay than Yara is. Just like the last time she was up for elimination, Yara says she doesn’t want to beg. YOU’RE SUPPOSED TO BEG. That’s what you signed up for!

This week’s lip-sync assassin is … Jessica Wild, from Season 2! I love this drink. Now, is Jessica necessarily an “assassin”? Absolutely not. She only had one lip sync on the show, and she lost it to Tatianna. But am I glad to see her back, and happy that this may mean a spot on All Stars is in her future? AbsoLUTEly.

Jan and Jessica lip sync to “Womanizer” by Britney Spears. (FREE BRITNEY, BY THE WAY!) Now, I love this song. I often strut down the street with this song blasting in my ears. I’ve performed my own lip-sync to it a few times in my bedroom. It has everything you need for a show-stopping lip sync battle. Unfortunately … the girls didn’t deliver. Jan seemed to get caught up in a robotic shtick, and Jessica was more focused on whipping her hair than delivering lyrics. But she was still pretty fierce, and she absolutely deserved this win over Jan.

That means the group vote determines who goes home, which is … Yara Sofia. Damn. Her kooky energy is truly unlike that of any other contestant in the history of the show. Though I think it was the right decision versus A’keria, I’ll still miss her. I feel like I’ll be saying that about every elimination this season, because these queens are just too good!

This season is honestly incredible. I’m so glad the show is getting back into its groove after the relative snoozefest of All-Stars 5 (though I, of course, stan Shea Couleé). Can’t wait for next week, for a challenge that’s not sports-themed so I can catch more of the references!