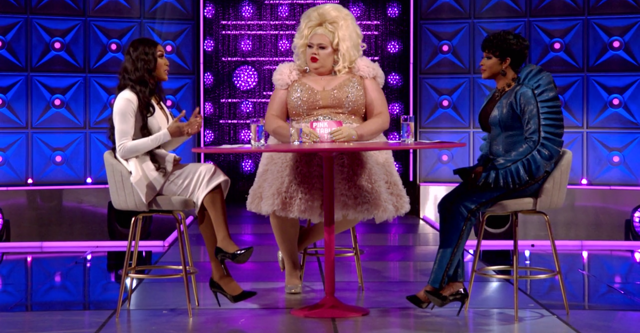 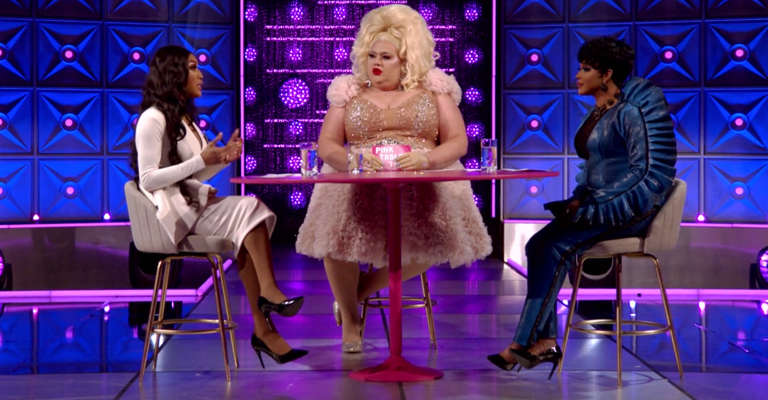 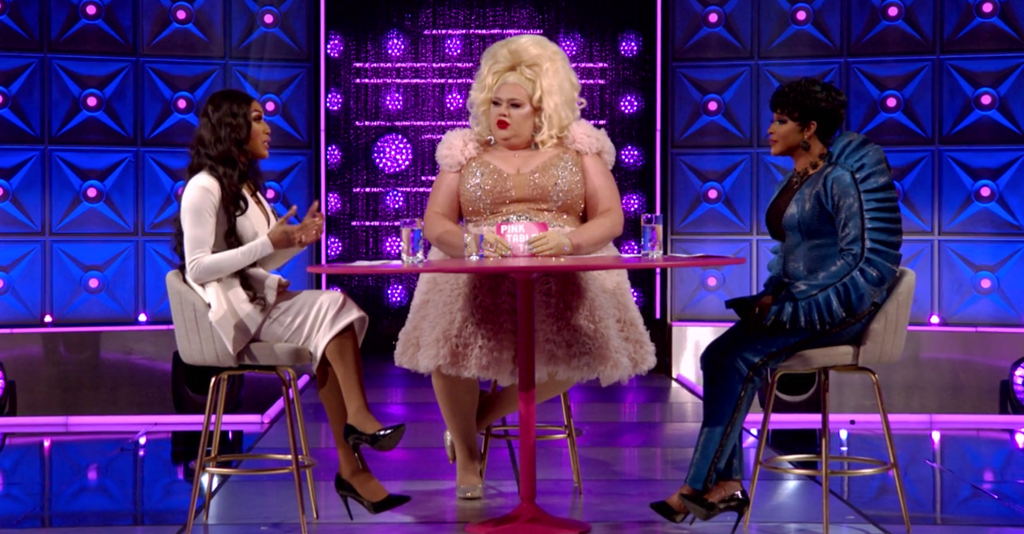 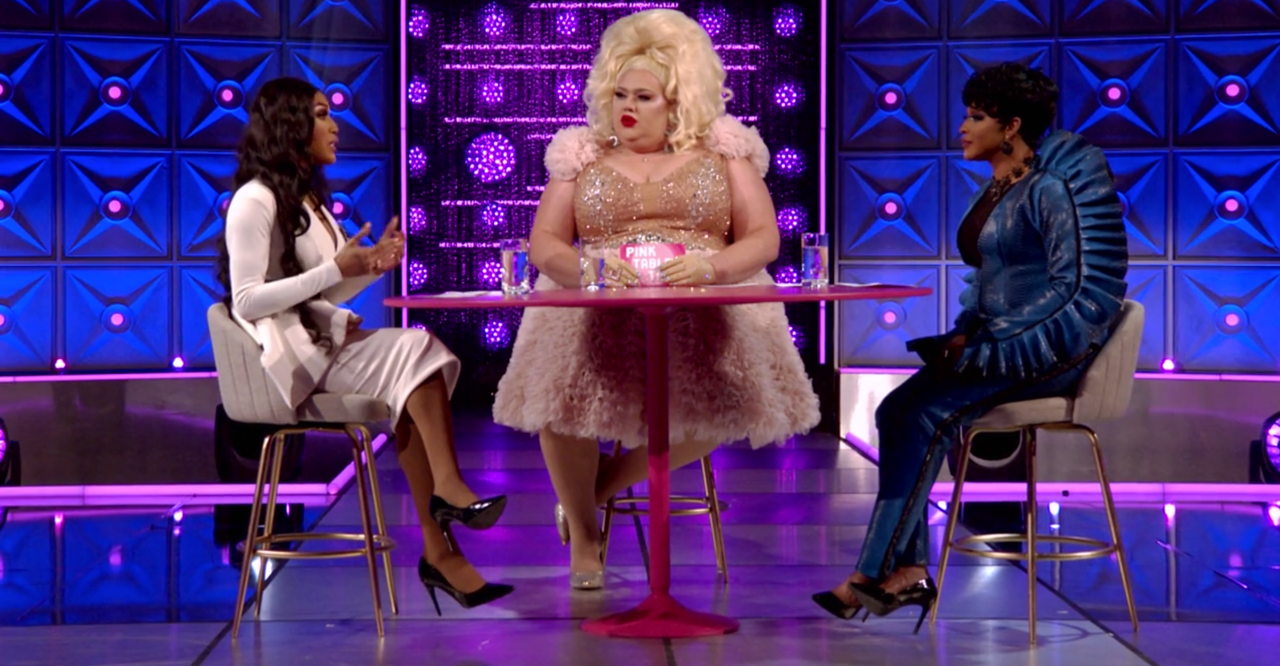 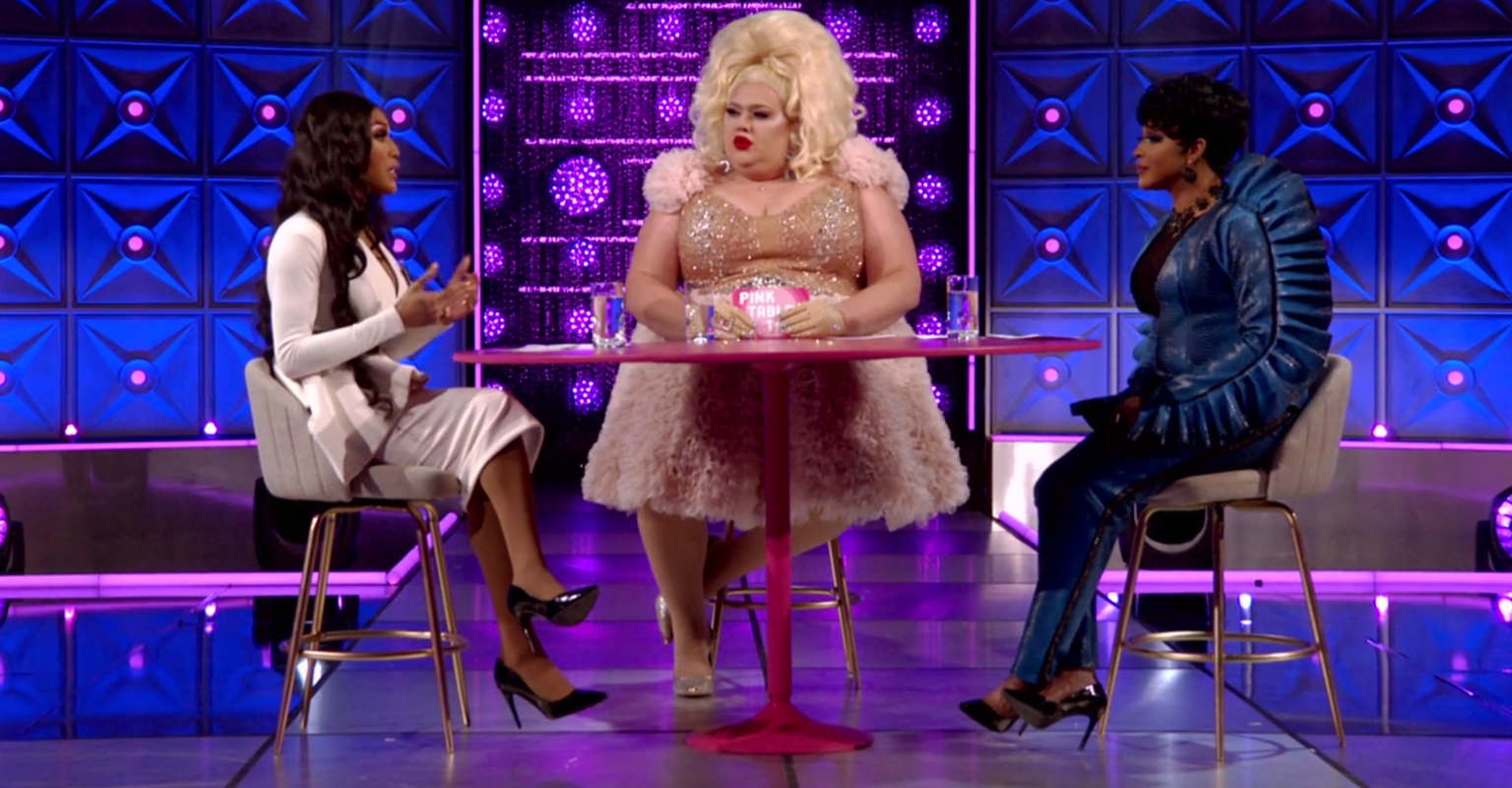 Welcome back to the INTO RuView, where we recap “RuPaul’s Drag Race” week by week. The fifth episode saw the queens getting deep for a heartfelt talk show — an interesting challenge for a show so steeped in parody.

The episode kicks off with a return to the werkroom after Yara’s elimination. Jan reveals the group’s votes — lipstick after lipstick says Yara’s name. “Is it gonna be anonymous?” asks Kylie. “You mean … unanimous?” replies Ra’Jah. God I love this cast.

As it turns out, the vote was anonymous — I mean, unanimous. Everybody voted for Yara. Except Jan, who chose A’keria only because she thought that’s what the group would want based on track record. Of course this would happen to Jan. Bad luck is the true Jantasy.

Anyway, she enters panic mode and tries to backpack, backpack, backpedal. The group isn’t buying it. Just own your shit, Jan! It’s okay. No hard feelings.

The next day, the queens find Yara’s mirror message. Jan reads it aloud: “You Gaston hilarious.” Except it actually says, “You guys are hilarious.” This is the episode of misplaced words, and I live for it.

Ru comes in to explain the week’s maxi challenge: Pink Table Talk, where in groups of three, the queens need to create and host talk shows that are “intimate, provocative and entertainting.” They get to choose their own groups and their own topics out of three options: sex, motherhood and body.

Scarlet wants motherhood so she can talk about her two moms, but Ginger also wants motherhood because she’s trying to become a mom herself. As “Drag Race” disputes are always settled, they play a round of rock paper scissors. (Okay, not always, but it’s weird that it’s happened twice, right? Monet X Change and Trinity the Tuck also used it to pick roles on All Stars 4.)

Scarlet wins, meaning she, Kylie and Ra’Jah have motherhood. That leaves Ginger, Jan and Pandora with body and A’keria, Eureka and Trinity with sex.

This challenge seems to be a little uncomfortable for some of the girls. It would be uncomfortable for me, too — this show may love its Emmy-winning tearjerker moments, but the queens aren’t usually forced to have them on the mainstage, or be literally judged for not opening up enough. It does lead to a painfully relatable confessional from Pandora: “Guess who has body issues! I do! Guess who doesn’t like to talk about them! It’s me!”

In her group, Kylie wants to take on the role of moderator, which is understandably concerning to Scarlet. Kylie’s amazing, but she’s not known for being much of a talker. But hey, she’s gotta prove herself at some point.

First up are A’keria, Eureka and Trinity to talk about sex. They completely ate this challenge. Their whole segment was very sincere and deep, but still lighthearted — like, this is something I would actually put on in the morning in the background while I do the crossword. A’keria opens up about once identifying as a trans woman, but having “re-transitioned” to live as a man. It’s great to see trans narratives on this show beyond those that cis people are most comfortable with. Gender is messy! Get into it!

Trinity also discusses having sex as an openly HIV-positive person, sharing the all-important message that undectectable equals untransmittable. Y’all hear that?? UNDETECTABLE EQUALS UNTRANSMITTABLE. Now stop it with the stigma.

The second group is Scarlet, Kylie, and Ra’Jah discussing motherhood. It’s not horrible by any means, but Kylie is a little quiet and Scarlet is a little robotic. Ra’Jah is the clear best of this group, sharing her complicated relationship with her mother. Kylie gives her some advice, and arguably the best quote of the episode: “Don’t let that hurt child make your grown-up decisions.”

The final group is Pandora, Ginger, and Jan talking body. Out of the gate, Jan seems a little out of place — a sparkly leotard doesn’t really give talk show vibes, and her amped-up energy just doesn’t fit the mood. But Ginger KILLS it. She’s charming, vulnerable, an excellent moderator, everything you need to be in this challenge. Pandora is also there! And she does fine.

As the girls get ready for the runway the next day, Ra’Jah breaks down talking about her mother, wishing to return to the closeness they once had.  “I don’t blame her for my childhood, but I don’t want to keep holding on to it. I want to move forward,” she says. It’s heartbreaking, and I wish I could just give her a hug. Luckily, A’keria’s there to do it for me.

Category is … Clash of the Patterns

For the second week in a row, A’keria is my top toot. I love when queens take a prompt in a completely unexpected direction: sewing patterns. Genius! And it looks fierce as hell too. I want that pincushion purse yesterday, please.

Maybe this outfit only impressed me so much because Ginger’s runways are so hit-or-miss, but damn she looks good! I think the safari motif is a cute touch we haven’t seen on the runway before, and a look with any conceptual element, for me, will always win out over plain-old pretty.

Sorry babe. This silhouette is just so scrunchy, it doesn’t flatter her at all. And Michelle Visage was right on with her critique — it would be wayyyy better without the chaps.

Pandora said this was an homage to Sally from “The Nightmare Before Christmas,” which I would love if she just took it all the way there. Where’s the blue face paint, Pandora?? Not even some stitches on your face? Without them, this just reads as a kind of ill-fitting dress thrown together from scraps.

Ru says that A’keria, Eureka, and Trinity are the best team of the week. Absolutely correct. BUT she also says that Ginger is the top all-star. Don’t get me wrong, Ginger was great this week, but so was all of the winning team. Why not throw a win to Eureka, or give A’keria her full redemption from the past two weeks? I’m not mad, just confused.

The whole judging process is a little off-putting this episode, just because it comes very close to judging the girls on their trauma. The worst moment is when RuPaul tells Scarlet that her performance made her “uncomfortable.” Like, damn, you’re gonna force these girls to be extremely vulnerable and then read them down for it? I think they could’ve been a little more intentional with the criteria here.

Regardless, Scarlet, Jan, and Kylie are up for elimination. Can’t say I disagree, but it is sad to see three fan favorites in the bottom. Ginger asks Scarlet how she was critiqued, and Scarlet says got “rave reviews.” Hm. Not quiiiiite the truth. But I can’t really tell if Scarlet is trying to manipulate Ginger into saving her, is genuinely misremembering what was said, or if the edit told us a different story than what really happened.

Either way, Jan isn’t having it. Both Jan and Scarlet name drop each other to Ginger in the one-on-one convos. So it seems like Kylie’s off the table. As she should be.

Jan also shares her frustration with being told she’s not real enough. I get it — Jan truly is just an over-the-top, energetic, can’t-turn-it-off typa gal, and getting told over and over that it’s not the real her must be super disheartening. But frankly, maybe “Drag Race” just isn’t her gig if that’s all that she’s delivering.

The girls return to the mainstage for the lip sync. This week’s assassin is … Bianca Del Rio? Who famously is great at every aspect of drag except lip syncing? Bold move. So bold, in fact, that it’s not true. Bianca’s just there for the gag! Between Laganja’s entrance, Jessica’s chicken mask and now this fakeout, I hope the lip sync assassin reveals just keep getting more and more dramatic.

The actual assassin is Mayhem Miller, the eyes of Season 10. Fierce! Mayhem didn’t really shine on her All Stars season, so I’m glad she can get another moment in the spotlight.

Ginger and Mayhem lip sync to “Phone” by Lizzo. BITCH. They both DEMOLISH it. But Ginger is the clear winner to me — her imitation duckwalk had me howling.

And indeed, Ginger wins the lip sync, along with $30,000. That’s more than Bebe Zahara Benet got for winning Season 1. Good for her. But it does mean she has to reveal her elimination choice, which is … Scarlet. Boo! Scarlet was robbed of so many high placements this season, and now she’s unceremoniously out of the competition. I really hope she can return, because I know she has so much more to show — then again, so do all the eliminated girls. Any of them could come back and I’d be pretty stoked.

Next week is an acting challenge. The scripts on “Drag Race” are always hit-or-miss, usually miss, so here’s hoping the girls’ performances can make it worthwhile. Honestly, this season won’t be the same without Scarlet. We’ll miss you!