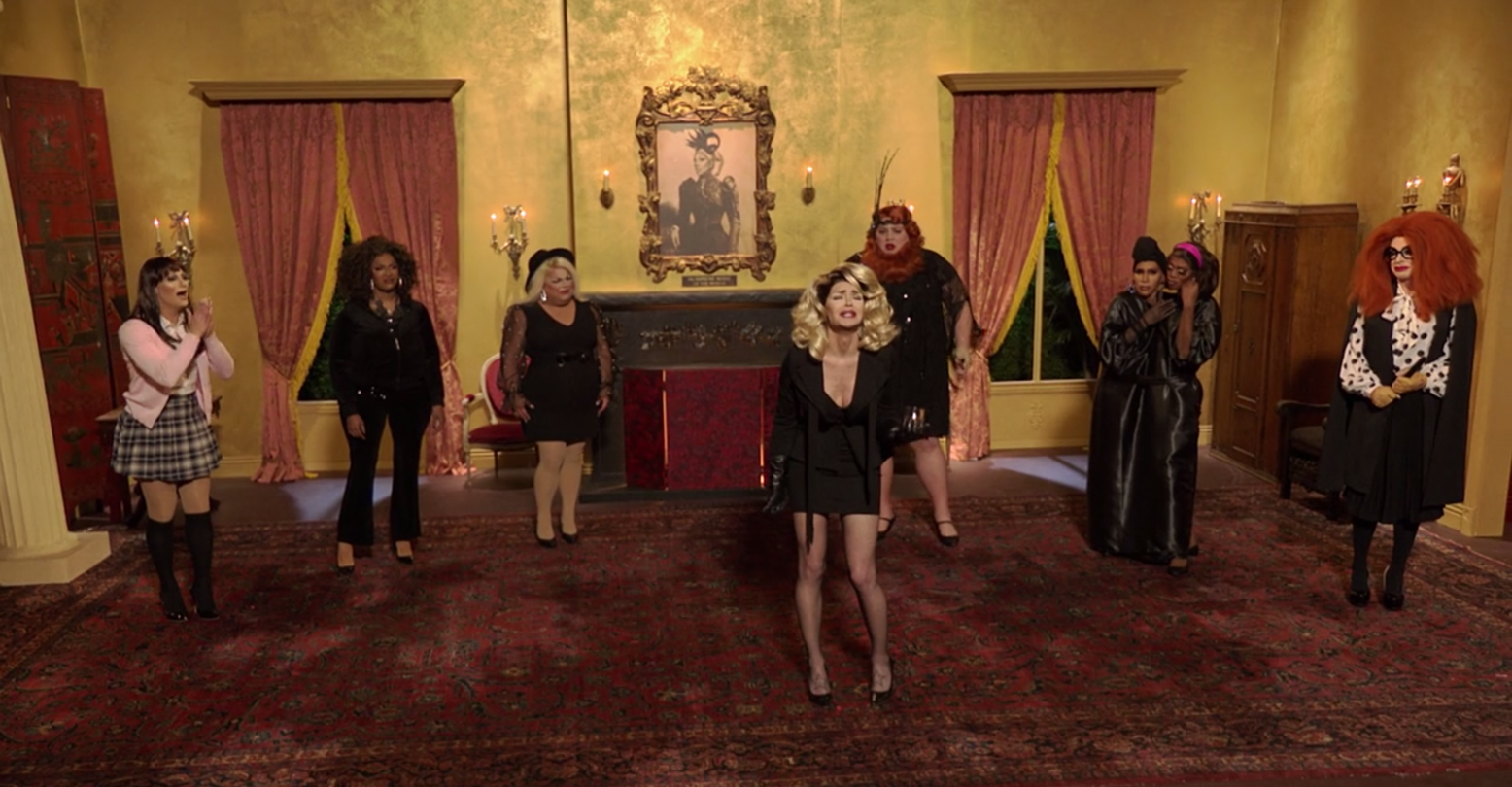 Welcome back to the INTO RuView, where we recap “RuPaul’s Drag Race” week by week. The sixth episode saw the queens flexing their acting chops in an acting challenge dedicated to the Ryan Murphy-verse — a true horror story if I’ve ever seen one.

The episode kicks off after Scarlet’s elimination, where Pandora once again reads out the group’s votes. It’s Pandora’s box after all.

The final tally was four votes Scarlet, four votes Jan — for the first time in All Stars history, it’s a perfect tie. What would have happened had Ginger lost the lip sync? Some production fuckery, no doubt, but it would’ve been entertaining.

While the other girls have fun speculating, Jan is unamused. She’s less than unamused — she’s pissed. She thinks having won the previous week should’ve protected her from elimination, which, sorry, is not how it works. Jan was really rough last week, whether she wants to admit it or not.

Jan is so thrown off, she straight-up asks the other girls if she was as bad as the judges made her seem. “I didn’t feel like I was up there the entire time,” she says, on the verge of tears. “Was I?”

“Yeah,” says a chorus of voices.

“…Thanks,” says Jan. Heartbreaking, yet hilarious.

The next day, the girls come in to find Scarlet’s mirror message: “Bubbles pop — keep blowing!” A reference to her bubble burlesque talent show, or, as Ra’Jah put it, “referencing this dream being her bubble, and y’all popped it?” Shady, but a reminder of the Ra’Jah/Scarlet friendship I’ll so dearly miss moving forward.

Ru comes in to reveal this week will be a scripted acting challenge — Rumerican Horror Story: Coven Girls. Certainly not the worst concept the show has cooked up, but they have a pretty horrible track record with scriptwriting. Who could forget My Best Squirrelfriend’s Dragsmaids Wedding Trip from All Stars 3? Breastworld from Season 10? Even Sex and the Kitty Girl 3 from All Stars 4? Truly some of the most painful episodes of “Drag Race” to watch. Maybe this one will be better…? Not getting my hopes up.

The girls get to choose their own characters, which are all parodies of figures from Ryan Murphy’s extensive list of television shows. Well, actually there are seven characters based on “American Horror Story” and one character based on “Glee”: Lea, a Rachel Berry parody that I’m fairly confident was included specifically for Jan to play.

Indeed, Jan snaps up the role and immediately bursts into song. Pandora sums it up: “If there was ever a role that was tailor-made for Jan, it’s this one. It’s peppy, it’s annoying.” Read her, why don’t you.

Based on Jan’s recent critiques, an over-the-top Rachel Berry impression is the last thing she should be doing. But hey, stick to what you know, right?

Eureka is Kathy, the bearded lady; A’keria is Gabby, the human voodoo doll; Pandora is Frances, a Myrtle Snow-turned-Joan Crawford knockoff; and Ra’Jah and Trinity are conjoined twins Sarah and Angela.

That means Kylie gets Jessica while Ginger is left with Emma, the young fashionista — not quite Ginger’s typecast, but she’ll no doubt make it work.

Prior to taking on the challenge, the girls get a video visit from Angela Bassett!! They all lose it, as they should, and though I’m sure Angela gave some great advice, everyone seemed too distracted by her radiance to take it all in. Can’t say I blame them.

Now, off to filming! Ginger and Jan immediately stand out as the best actors. Take it from A’keria: “I think Jan was acting in the womb, and I think Ginger gave birth to her.”

On the flip side, A’keria and Eureka are giving very flat performances, while Ra’Jah’s bizarre choice of character voice seems to be holding her back. Kylie is also struggling — just like last week, she’s simply not going big and loud enough.

In an attempt to help Kylie, Michelle does something I absolutely despise: she gets up and acts out the part for her. Bitch, what, you just want her to copy you exactly? No original thought or Kylie touch in the mix? Line readings always irk me to no end.

It does seem to help Kylie somewhat, as she cranks her performance up a notch. Honestly, I like what she’s giving. It’s a little more subdued than, say, Ginger’s performance, but I don’t mind a more realistic take. Also, she looks so impeccable, and so much like Jessica Lange! I don’t know if she’s just really good at painting or if Kylie’s always been her doppelganger, but either way, it’s a killer illusion.

Prior to the runway, there are some fun werkroom moments. Eureka and Trinity are apparently cooking up a showmance? Real or produced, it’s fun as hell to watch.

And A’keria apparently has a “crazy passion for funeral homes,” and wants to run one?? Somebody make that happen and put cameras on it IMMEDIATELY. Television gold.

This week’s runway is goth couture, and I’ve gotta be honest: I loved it. I loved every single look! I am a part of the Addams Family at heart. But we must have tops and bottoms regardless, so here we go.

Category is … Oh My Goth

Of all the dramatic black looks on the runway today, A’keria’s takes the cake. The cross headpiece is gorgeous, and the scalloped texture of the whole garment is super creative.

Like I said, no one was bad. Eureka was just the least good. This outfit has very little spark for me — it looks like something Eureka would have brought to Season 10, not All Stars 6.

I hate to do this, because Pandora was truly pretty good on this runway. Her makeup is cool, the dress is high-impact — it’s just the most obvious gothic look possible.

At last, we get to see the challenge. And afterward, I wish I hadn’t seen the challenge. It’s everything that’s wrong with “Drag Race” skits: boring, overly referential, lacking in comedy, and at least five minutes too long. Jan’s Lea Michele character did stand out to me, perhaps just because I’m a reformed Gleek, but she was the only one to make me laugh. I won’t waste any more time on it.

The tops of the week are Kylie, Jan and Ginger. I agree, they were the strongest three, though I could’ve seen Trinity up there too. Eureka, Ra’Jah and A’keria are the bottoms, which also makes sense — none of them are the strongest when it comes to acting.

The overall winner is … Kylie! Her performance didn’t really wow me, but just for that runway, I’ll allow it. This marks the sixth unique challenge winner in six episodes — not since Season 5 of the main series has a season of “Drag Race” felt so evenly matched. And I LOVE it.

Ra’Jah and A’keria are announced as the bottom two. As much as I love them both, I wouldn’t put anyone else down there, meaning it’s a well-deserved battle of the apostrophes.

As Ra’Jah points out during deliberations, Ra’Jah and A’keria were also in the bottom together on Season 11, when A’keria sent Ra’Jah home. But Ra’Jah doesn’t see it that way: “It wasn’t her that sent me home; it was me that sent myself home, basically, being defeated in my mind.” And this time, Ra’Jah’s head is in the game. She’s won a challenge and has never placed in the bottom, while A’keria has been in the bottom twice already and has yet to win. I love her, but to me, the decision here is obvious.

Still, a vote has to take place, and Kylie has to make a choice. Let’s just take a moment for this shot of Kylie, okay? One of the most gorgeous queens to ever grace this show.

The lip sync assassin is revealed to be: Manila Luzon! Now, Manila can eat up a campy lip sync for sure, but this week’s song is “Dirrty” by Christina Aguilera. Kylie gets to do an Xtina song on the mainstage?? Maybe I do believe in god.

Predictably, Kylie absolutely slaughters Manila. I will say, however, the whole time she was performing, I was terrified for her titties in that teeny little crop top. Whatever kind of adhesive she’s using, I wanna invest.

Kylie reveals her lipstick: A’keria. At least she went out looking sickening, as she always did.

Next week is a girl groups challenge, which are always fun (and occasionally lead to chart-topping hits). It does raise a few questions: where the hell is Snatch Game?? And when do we finally get payoff for this “game within a game” twist? Only time will tell.