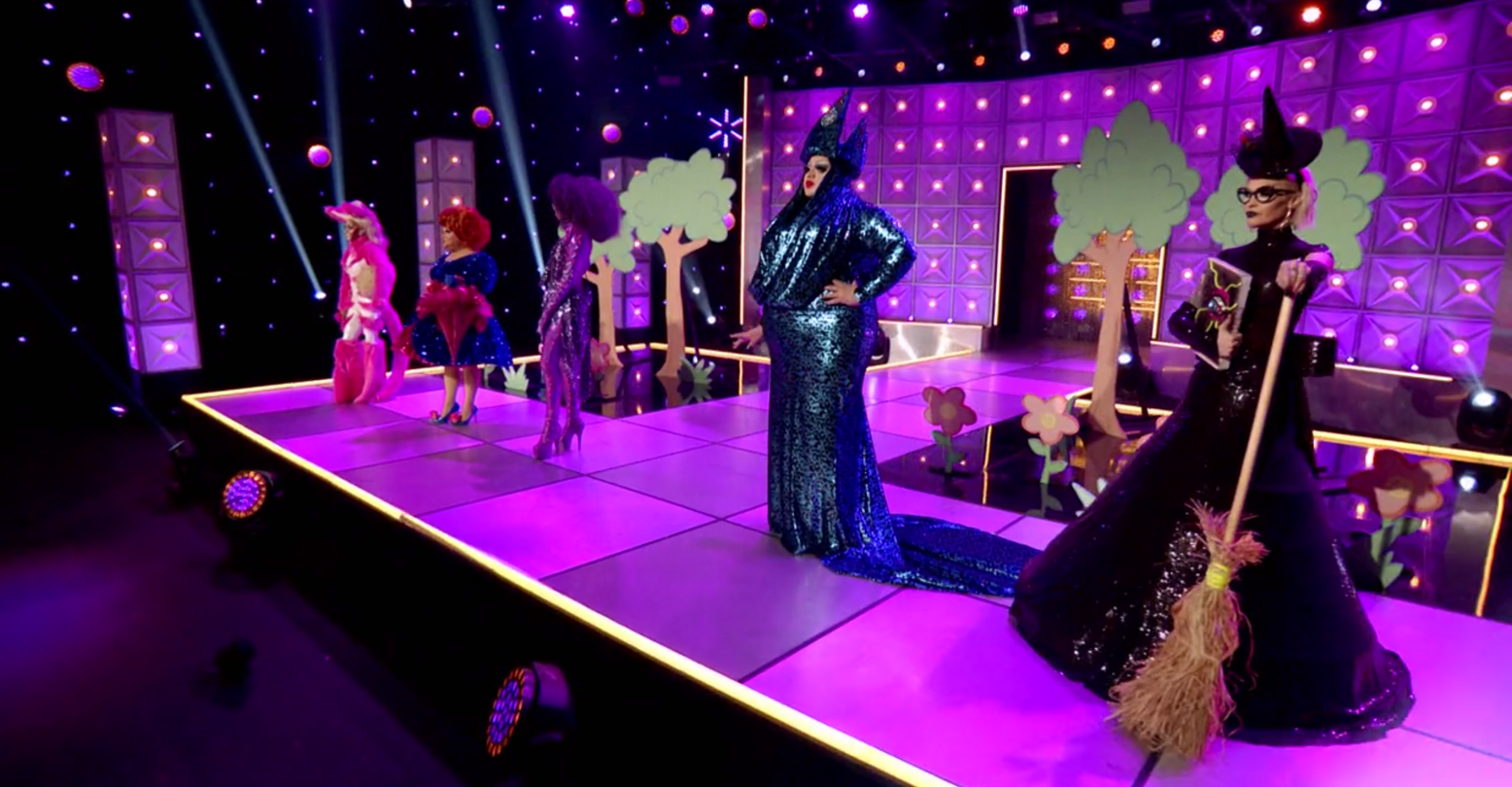 Welcome back to the INTO RuView, where we recap “RuPaul’s Drag Race” week by week. The ninth episode of All Stars 6, “Drag Tots,” saw the queens creating characters for a drag-inspired kids’ cartoon. Drag usually isn’t kid-friendly, but it’s certainly whimsical, so let’s see what they whipped up.

The episode kicks off after Pandora’s elimination, where Trinity wastes no time digging into the box of votes. She reveals that the vote was unanimous for Pandora. “My girls!” she exclaims. Let’s be real: unless there was some shady Manila business happening, Trinity was never going home last week. But she now has another ding to her track record, meaning she’s been in the bottom more than any other queen, so she definitely needs a redemption ASAP.

The girls find Pandora’s mirror message the next day, which ends with a cute reference to “Hitchhiker’s Guide to the Galaxy”: “So long, and thanks for all the fish.” We stan a nerdy queen!

Ru comes in and announces a mini challenge, only the second of the season. The queens will be voting in class superlatives, and get points if they vote in the majority. It comes complete with a classroom set. Cute!

Surprisingly, this challenge actually stirs up quite a bit of drama. Most of the categories are fun and games — prettiest, most likely to steal your boyfriend, most likely to be president — but others aren’t so lighthearted. Eureka gets stuck with a load of negative categories — messy, gassy, bossy, shady — while Trinity gets labeled moodiest, which she ironically immediately proves to be true by being moody about it.

The last category is most likely to go home next. Trinity and Eureka tie with two votes each. Trinity feels some type of way, which is silly, because she voted for herself and otherwise wouldn’t have won the category!

In every season of “Drag Race,” there’s one episode where Ru seems to be on something. This is that week. He’s highly animated as he talks with all the girls about their concepts. Ginger plans to be a shady southern belle, and Eureka wants to play a villain. Ra’Jah tell Ru her character will be named Queen Seeme, which Ru accurately clocks for sounding like Queen Semen. He then goes on a rant about the word Mexicatessen?? I’ll have what she’s having, thanks.

These sewing challenges are always fun to watch, because we get to see all the queens’ personalities shine in the werkroom as they create. With this cast, that means seeing Trinity strut around with a pool noodle between her thighs, and Eureka execute barrel rolls while cutting out her fabric. Doesn’t seem like the most efficient method, but I’m no seamstress.

Kylie is, unfortunately, seeming to struggle the most. She’s made fierce looks in the past, both on her original season and for this season’s Blue Ball, but her sewing machine is not agreeing with her. Worst comes to worst, she truly could walk the runway naked and no one would complain.

Before we get to the challenge, Ru once again proves she’s feeling extra this episode. She …. vogues? Down the runway? Okay, werk.

This week, challenge and runway are one and the same. And since we’re down to five girls, I’m just gonna rank them, best to worst.

Ra’Jah was the hands-down winner for me. Her character, I’Siya Queen, was by far the most creative, and had the best message: “If someone makes fun of you for being offbeat, you just tell them, ‘Baby, you can’t hear my song.’” Using googly eyes to show the “power of perspective” and pulling off a flawless purple makeup job are the cherry on top. I’d watch her cartoon anytime.

The judges may disagree with me on this one, but Kylie’s look as Miss Behave was near perfection to me. The tailoring was on point, the details were there, and the bitch made props. THE BROOM STOOD ON ITS OWN. Witch, please. No, really, please!

Meh of the Week: Ginger Minj

Ginger’s garment is one of the best things she’s worn this season. That fabric is gorge. Unfortunately, Ginger’s shady southern belle, Terra Belle, was a little too in her comfort zone to be impressive. But I can’t deny she looks stunning.

Okay, Trinity completely ate this cat makeup as Fierce Furlicia the Feline. And the outfit looks so hard to construct — I mean, she deserves so many props. But on the negative side, I’m just not a fan of the aesthetic. It’s a little too furry for comfort.

Not a bad look, especially for a design challenge! But Eureka’s character, Alexandria McQueen, lacked depth and energy, and the look isn’t strong enough to redeem that.

Everybody did well this week! If there were more girls left in the competition, these five would probably all be safe. But them’s the breaks, and somebody has to go.

Ra’Jah is rightfully announced as the winner — duh! We see you, I’Siya! And at this point in the competition, everyone else is up for elimination. Yikes.

During deliberations, Eureka is especially teary. At this point, it seems like it’s between her and Trinity to go — Eureka has no wins, and this is Trinity’s third bottom. But considering Trinity’s look was better than Eureka’s, the writing’s on the wall, and she knows it.

This week’s lip sync assassin is … Kameron Michaels! Another queen who I hope to see on All Stars 7. Bitch, she looks STUNNING in this hair and outfit.

Now, I expected them to do a Charli XCX song — she is this week’s guest judge, after all — but what occurred on that stage was blatant homophobia. They’re doing “Boom Clap.” “Boom Clap”!? “Vroom Vroom” was right there. “Blame It on Your Love” was right there. Imagine how iconic this could have been.

But no, two incredible lip syncers, Ra’Jah and Kameron, are somehow supposed to turn it out to a sleepy mid-tempo drunk-at-the-club song. Kameron does win, but neither really turns it out.

Kameron reveals that the group has voted for Eureka to go home. Not a surprise, but it is tragic to see her leave without a single win considering how well she did on Season 10.

But wait — Ru appears on the screen, and instead of her typical game-within-a-game message, she catches Eureka by surprise. Eureka just took her headpiece off, but she refuses to be caught without hair on. “You’re not gonna get me without a wig!”

Ru tells her to get to the mainstage immediately for a lip sync. Against who?? To what song??? It’s FINALLY time for the game within a game to be revealed! It’s been 84 years, but it’s here. I cannot wait to see what the eliminated girls have been up to, and any kind of lip syncing challenge is guaranteed to be a good time. And once it’s over, we’ll have our true top five. It’s really still anyone’s game. Ahhhh!