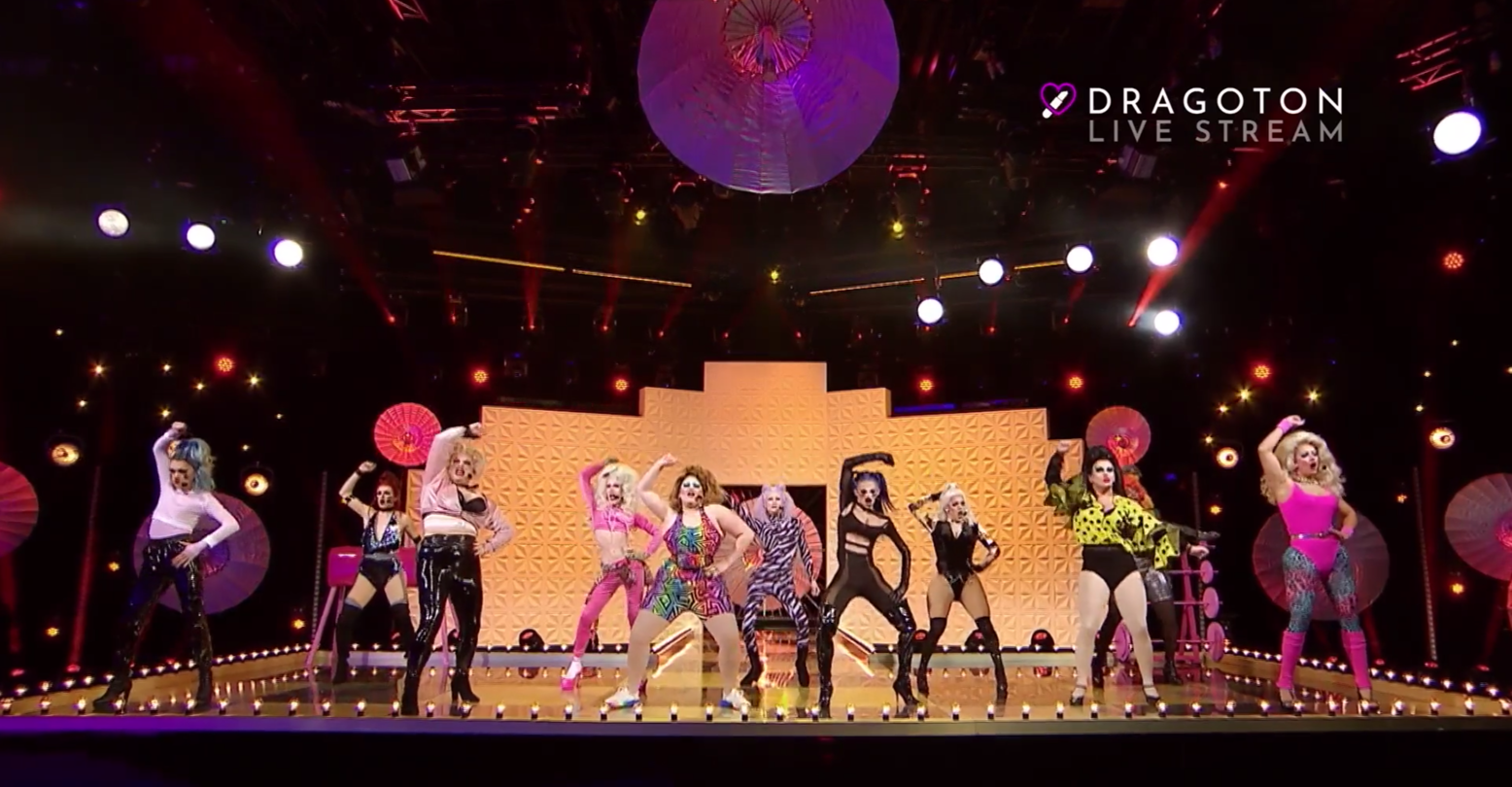 Welcome back to the INTO RuView, where we recap “RuPaul’s Drag Race” week by week. The second episode of “Drag Race UK” Season 3 saw the queens work up a sweat in a dance challenge … that’s also a Peloton parody? Sure, why not.

The girls return to the werkroom after Anubis’s elimination. Elektra goes to wipe it away, but she’s too short. If only they still had a ladder in the werkroom — y’know, like they did in the background of the very first “Drag Race” episode?

Concerningly missing is Victoria, who apparently injured her knee during the Top 2 lip sync and is getting it checked out. Knee injuries are, for some reason, the greatest villain of the whole franchise — just ask Eureka. But Victoria’s still around for now.

The next day, Krystal is bragging about getting the first win and how she plans to win many more. To which Veronica says, “I can’t get over the fact that her head is so small. And yet so big.”

This week’s mini-challenge isn’t much of a challenge at all, considering Krystal’s the only one playing. Ru tells her to assign labels to the other queens in a “Supermarket Sweep” parody. Ru asks if she’s shady enough for the task — yeah, I think she’ll manage.

The first category is “Star Buy,” the biggest competition, which she gives to Victoria. It seems like a compliment — at first. We’ll get into it.

Next is “Bargain Bin,” the queen with the trashiest taste. It goes to River Medway. ExCUSE you, that traffic cone look was HIGH ART.

The “Hot Deal” label is for the trade of the season. Krystal chooses Ella, which … yeah. Yeah.

“Out of Date,” a totally irrelevant queen, goes to Veronica Green. I mean, her run on the previous season sure wasn’t irrelevant, considering she earned a win before her disqualification … but sure, Krystal. We’ll see.

Last is “BOGOF”: the queen Krystal thinks will be next eliminated. It goes to Elektra Fence. No spoilers, but, uh, Krystal may be onto something.

Everyone in the room is immediately put off by her distasteful joke — body shaming hasn’t been funny since the early 2010s, and even then, was anybody laughing? Krystal doesn’t let up, either — she throws deep shade at every one of the contestants she gave a label to. Choriza sums it up perfectly: “This is savage.” And she gives us this great face, too.

Ru announces the maxi challenge, a dance and characterization challenge inspired by Peloton, called Dragoton. Is that really the best pun we could come up with? RuPauloton was right there.

Ru divides the girls into teams, seemingly based on the order they’re lined up in. That means Choriza, Vanity and Elektra are the Ride or Dies, dancing on stationary bikes; Krystal, River, Veronica and Kitty are the Ball Busters, busting a move on exercise balls; and Charity, Victoria, Scarlett and Ella are the Babycizers, mothers working out with a baby on their hip.

Each team quickly establishes a group dynamic: Krystal is the dead weight of the Ball Busters, Victoria’s knee is the saboteur of the Babycizers and Choriza, a non-dancer, is working alongside the two strongest dancers on the Ride or Dies. In classic reality TV fashion, almost everybody’s got something to prove.

It’s time for rehearsal with “Strictly Come Dancing” winner Oti Mabuse, who, frankly, is too good for this shitshow. She’s an outstanding guest, and this weird challenge isn’t doing her any justice.

Regardless, the big takeaway from rehearsal is that this choreo is HARD. Even the dancers are struggling, either with their cumbersome exercise props or just with the intricate steps. Oh, and Veronica is wearing a silly little dance outfit. A response to being called “Out of Date”? Mayhaps.

The next day, Victoria has a chat with Krystal about her fatphobic comment the previous day.

“You never know what someone’s been through,” she says, sharing her experience with eating disorders and body shaming in the dance and theater communities while acknowledging Krystal’s own journey with self-love.

The conversation opens up to the whole group: Elektra talks about coming to love her freckles, which she once wanted to use bleach on, and Vanity was called the “dark sheep” of her family for her complexion, which she’s since come to love. She also calls out the fact that she’s the only Black queen on the season — let’s do better next time, production. The UK has a wonderfully diverse selection of drag artists to choose from, so why not show that off?

“What a lovely conversation that just happened,” Victoria says, “all stemming from Krystal calling me fat yesterday.”

Challenge time! Wow, was this rough. Everyone was constantly doing different dance moves, so I could never really tell who was actually getting the choreo right. Positive standouts were Choriza, Kitty and Veronica, who all at least killed it in the character department, while Charity, Elektra, and Victoria didn’t give much of anything.

Is Choriza the surprise runway queen of the season?? I’ve loved every one of her looks! Here, I’m living for the playful patterns and the amazing hair sculpture. It’s a wonderfully camp take on a red carpet, but it wouldn’t be out of place on one either. I’m kinda obsessed with Choriza, if you couldn’t tell.

Charity may have bombed the challenge, but she ate the runway, at least for me. First of all, she’s already proving she can deliver glamor when necessary, and second, the bitch made this! Yards upon yards of fringe and koi headpiece and all! That’s pure talent, and the look is simply stunning.

“Why have you come here dressed as a wizard?” An apt question Elektra would later face during critiques. This is giving the worst-dressed citizen in the Capitol. Nope. Sorry. Next.

It’s not Victoria’s fault she couldn’t wear heels on the runway, but that doesn’t mean she doesn’t look rough here. She admitted herself on Twitter that this dress wasn’t her first choice, and I can see why — it has almost no shape to it, and though it’s pretty enough, it’s not a showstopper by any means.

Also, not sure how much of a hand production had in this, but the girls sorta make a rainbow when all 11 stand in order! Gay rights!

This week’s tops are Krystal, Veronica and Kitty. I would’ve swapped Krystal for Choriza, but I’ll take it, I guess. And the bottoms are Elektra, Charity and Vanity. Sorry, but Vanity had no business in that bottom three, let alone the bottom two. What madness is happening on this day!?

The winner of the challenge is … Krystal? But why? Call me crazy, but she was solidly middle of the pack both in the challenge and on the runway. And she just got the win last week, so it’s not like she needed a boost. Is production just really pulling for her to win the whole season, so they’re throwing badges at her whenever possible? It’s a bizarre choice.

And Vanity and Elektra are the bottom two. Again, some weird-ass judging! But it does result in a fabulous lip sync to “Moving On Up” by M People. Remember last week, when I asked who’d be able to beat Elektra? I got my answer. Vanity fully embodied the song, while Elektra was simply doing too much. Michelle couldn’t even hide her confusion when Elektra started breakdancing. She straight-up says, “What the fuck?” I died.

Elektra sashays away with an apparently improvised exit line: “Never let anyone tell you you can’t be something. Show those bullies that you can be something. Smash it, smash the world, and peace.” I mean, I hope that wasn’t rehearsed.

The episode isn’t over, though — Ru calls Victoria forward to tell her she needs to get her knee checked out by a doctor. If the injury isn’t too serious, she’ll continue in the competition — but if it’s not safe, she’s out of the running. Damn. Of course, I hope Victoria gets to keep competing, but things aren’t looking good. Season 4, here she comes?

Next week is a design challenge, which are always among the most entertaining. I’m expecting big things from Choriza and Charity — I’m not expecting much from Veronica and River. But who knows what’ll happen? Until next time, remember the immortal words of Alexis Michelle in seminal classic “C.L.A.T.”: don’t pop the knee, it’s showtime, folks.