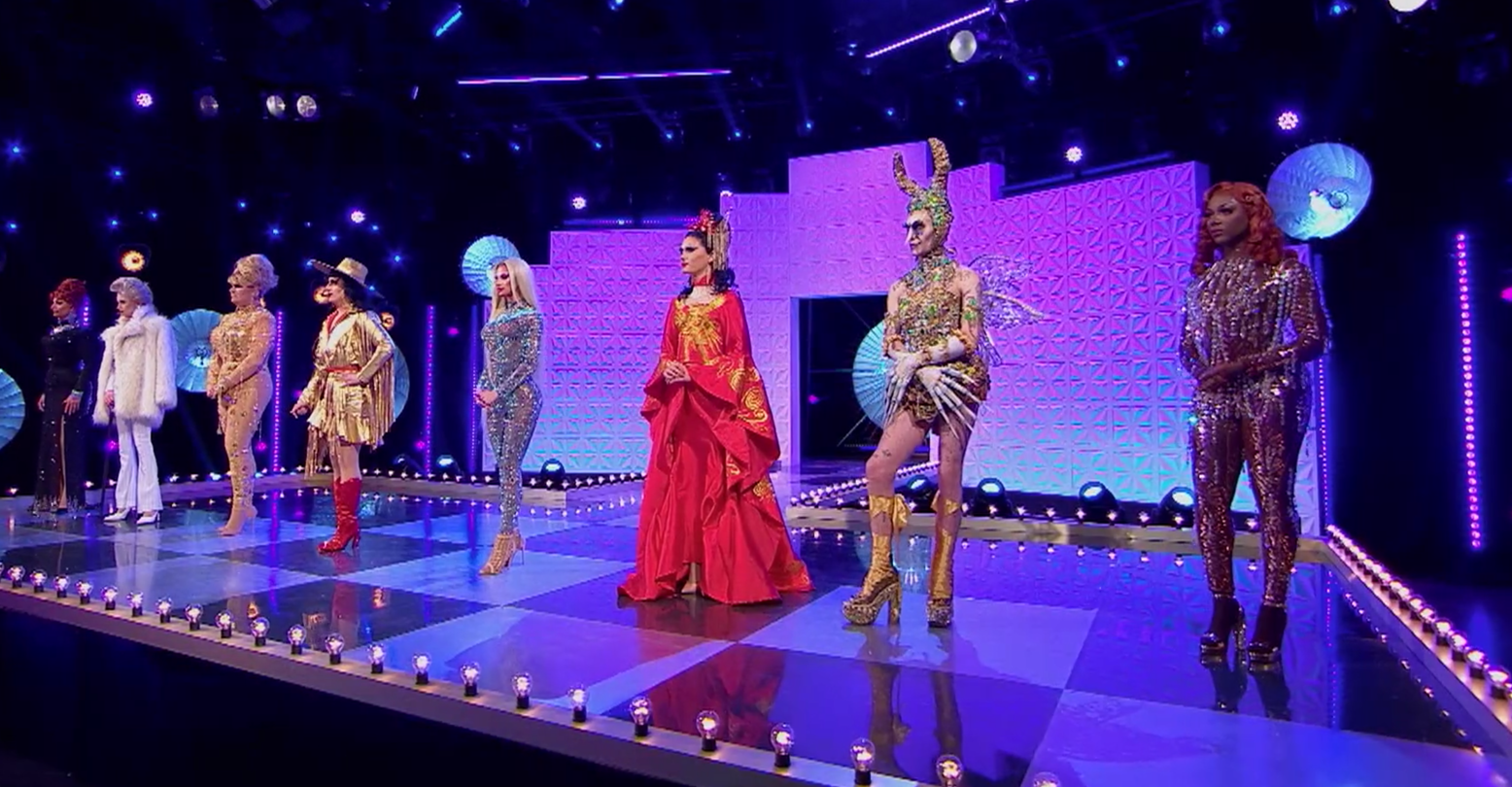 Welcome back to the INTO RuView, where we recap “RuPaul’s Drag Race” week by week. The fourth episode of “Drag Race UK” Season 3 saw the queens creating infomercials for a robotic personal assistant. Wow, this was bad.

The girls return to the werkroom after the double shantay. Both Scarlett and Charity have a great deal to prove — Scarlett that she’s not on a one-way trip to the bottom, and Charity that she can … I dunno, do drag the way the judges want her to? To be honest, Charity has deserved better throughout this competition (a trend that will painfully continue in this episode as well).

Meanwhile, Scarlett, brash as ever, points out that Charity and Kitty are now the only two without wins after Pick’n’Mix’s joint victory. Quite rude! But true. Usually, a comment like that sets up a queen to win or go home. In any other episode, that’d be good news for Kitty. But this is Draglexa. All the rules are out the window.

The next day, the queens compete in a mini challenge: RuPaul’s dog race, a partnered challenge where one queen is the dog and one is the trainer. They get to choose their own teams. Scarlett immediately grabs her east London sister Charity — who has other plans. “I wanna be with Kitty!” she yells, pulling herself out of Scarlett’s hug and running across the room to Kitty. DAMN. Savage.

This challenge produces some … interesting looks. How Charity had time to apply a full prosthetic for a quick drag challenge is beyond me.

It’s not the best challenge I’ve ever seen, but the leftover pair of Krystal and Scarlett turn it out — mostly Krystal, whose “cool mom” realness wins Ru over. They win the challenge, each receiving a trophy. Gotta love the BBC and its rules against giving out prizes with any real value.

For this week’s maxi challenge, the queens will “promote and personalize” the Draglexa, a digital assistant modeled after a real-world equivalent with a suspiciously similar name. Usually these advertising challenges are done solo, giving each girl a chance to prove her branding and comedy skills independently, but instead, Ru says that Scarlett and Krystal are team captains. This is the episode’s first major misstep — there simply aren’t that many comedy queens left. Why not let them shine individually instead of forcing them to collaborate, especially coming off of a team challenge last episode?

On Team Scarlett, Scarlett herself is taking the lead, desperate to redeem herself, while on Team Krystal, Charity is at the helm, maybe for the same reason. But both of their teams put up some resistance; Scarlett’s “Mommie Dearest” reference lies on the cutting room floor, while Krystal shoots down Charity’s concepts for not being funny enough. Both groups seem to be on the struggle bus.

Ru comes around for a walkthrough, and each team gets one standout moment. As Vanity describes one reason you might need the Draglexa (“Are you tired of doing your makeup yourself?”), Ru interrupts with a rare kernel of truth: “I’ve never done my makeup myself.”

And while critiquing Choriza’s meaty tuck, the Spanish queen throws innuendo out the window. “I do have a very big penis, yeah. That’s why I named myself after a Spanish sausage,” she explains. “I’ll stick it up my bum bum.”

Filming the commercials goes about as well as you’d expect — that is to say, poorly, from what we can see. Usually, this is a cute fake out moment in episodes like this, only for the final product to be hilarious. Hm.

Prior to the runway, Scarlett opens up to Kitty about her previously strained relationship with her mother, which only improved in recent years, just in time for her mother to become sick with COPD.

“We have the best relationship now, because she loves me for everything I am,” Scarlett explains. “The hardest part about that is I know that’s gonna be gone soon.”

Ultimately, Scarlett says, she just wants her mom to see her succeed before she’s gone. Damn, this season is really for the moms, huh? Tear-jerking as stories like Scarlett’s and River’s may be, it’s also beautiful to see mothers being so supportive of drag, when stereotypically drag is something kept hidden from biological family.

This runway theme isn’t the most tasteful, considering this season was filmed during a pandemic that left almost every live performer strapped for cash. But River found a way to personalize the theme by honoring her East Asian culture, and looking positively stunning in the process. This is the best River has looked yet, and she blew the other girls out of the water this week.

Of the several queens who went for a dripping-in-money look, Kitty executed it best. Like River, she’s never looked better on the runway, and seeing her look so sickening in this catsuit silhouette makes me wonder why we haven’t seen it more often.

Never thought I’d see Krystal, the “look queen,” at the bottom of my rankings, but here we are. This doesn’t look expensive — it looks like a stock costume owned by every drag queen. It’s especially unfortunate on Krystal, considering she wore almost the exact same outfit and wig is last week’s challenge. Yet she’s not the one critique for versatility this episode … how inch resting … oh, and the shoes are a hate crime.

Y’all know I love me some Choriza. But this really missed the point of the assignment. This fabric is about as far from “expensive-looking” as you can get. She seemed to get caught up in her gold rush concept, but she escapes the bottom for the simple fact of having a concept in the first place.

It’s time to watch the commercials, and straight-up, I don’t want to talk about them. These are capital-B Bad. So bad that the queens’ performances in them don’t even seem relevant to the rest of the judging, considering RuPaul pulls out a twist and opts not to choose a winner at all. Nobody even gets a high placement.

This strikes me as a touch unfair — maybe nobody did amazingly this episode, but some girls still did better than others. If this is the cast you chose for the season, and every single one of them flopped, the best of the worst is still technically the best, right?

Maybe I also disagree with this choice because, based on critiques, the win clearly ought to have gone to River, whom I stan. Oh well.

Notably, in critiques, Charity is singled out for not being versatile because she’s doing more monster drag on the runway. But, Charity has been versatile. She did glamor in Episode 2, and even in this very episode, she did glamor for the infomercial. The annoying thing about this critique is that it’s only ever given in one direction: alternative queens like Charity are told they need to show they can do mainstream, but mainstream queens like everyone else on this cast are never told they need to do alternative. If Ru wants to keep casting alternative queens (which he should; they’re sickening), he needs to start judging them fairly. Make everybody do every kind of drag, or just let people stay in their lane, but you can’t have it both ways.

Ru pulls yet another twist on the runway: it’s that time of the season where the girls have to say who should go home and why. Kitty chooses Vanity, Ella and Scarlett choose Charity, and Choriza, Krystal, River, Charity and Vanity all choose Scarlett

Even on the runway, it’s clear Scarlett is pressed. After she gets her first vote, she interrupts to tell Ru her “hilarious” Joan Crawford joke from the werkroom, blaming her team for shooting down her material. Girl, you simply weren’t that funny.

This gets even more dramatic in the werkroom, where the tension blows up into the biggest backstage fight “Drag Race UK” has seen yet. Here’s what it boils down to: Scarlett is pissed that she got the most votes to go home, and in her most ironic move yet, cannot stop interrupting people while being told to stop interrupting people.

This escalates to Scarlett walking out of the room and standing dramatically in the alley. I feel for her — I’m sure she was really going through it — but there’s a certain level of comedy to seeing someone have a full breakdown while dressed as a knockoff Miranda Priestly.

She cools off, comes inside — and immediately starts arguing again. The issues really don’t find a resolution, and it seems Scarlett’s doomed to this being her storyline for the season.

Ru announces the winner — ope, no she doesn’t. Soz, I forgot. She announces the bottom two: Scarlett and Charity, for the second week in a row. The exact queens saved in a double shantay lip syncing again the very next episode? Camp.

They lip sync to “Big Spender” by Shirley Bassey. Okay, now this really is camp! Charity is amping up the goblin energy of her outfit, and it’s a fun take on the song, but Scarlett’s more direct theatrical take wins out. At one point she straight up pushes Charity away — not the nicest move, but it do take nerve. She’s told to shantay, and Charity sashays away.

Honestly, I just feel like it’s such a waste to lose Charity at this point. She’s consistently presented the most creative drag in the competition, doing things no other artist on that stage would even conceive. I understand “Drag Race” may not be the format for her, but the fact she was never even praised for the times she did do well … I don’t know, it doesn’t sit right with me. Hopefully we haven’t seen the last of Charity — “Dragula” Season 5 is calling her name.

Next week is Snatch Game. Hoo boy, I’m nervous. Maybe this cast can shine when they’re in charge of their own individual comedy instead of working in a group? I hope so — the last thing this flagging season needs is a lackluster Snatch.