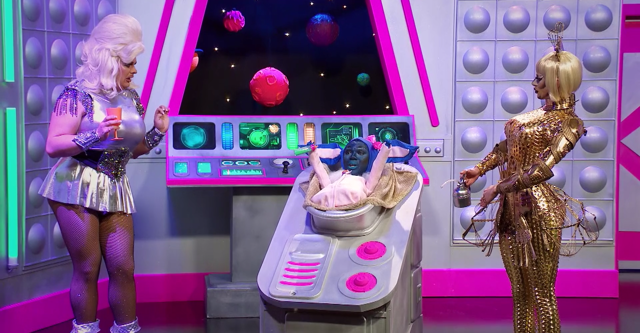 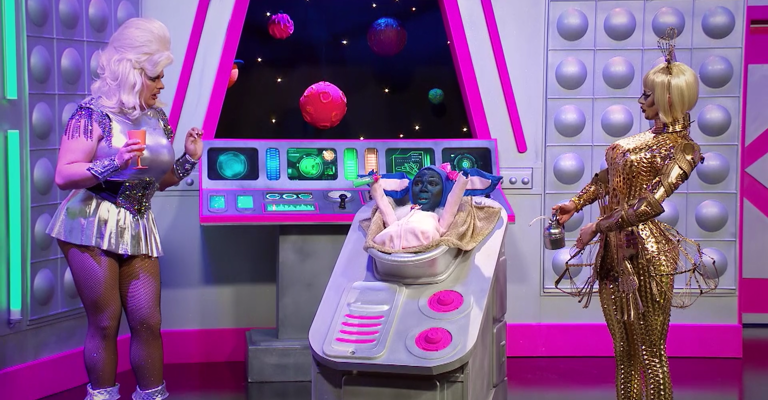 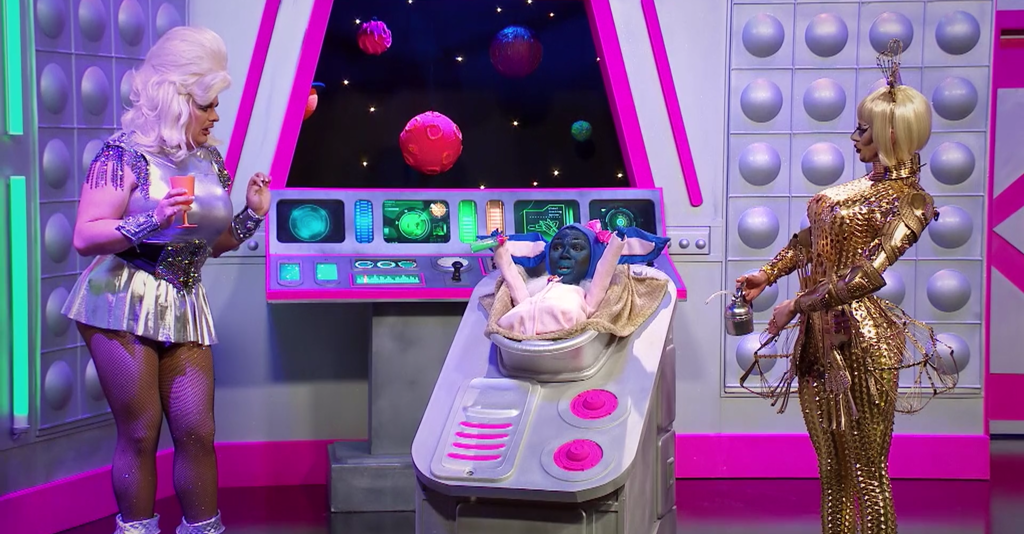 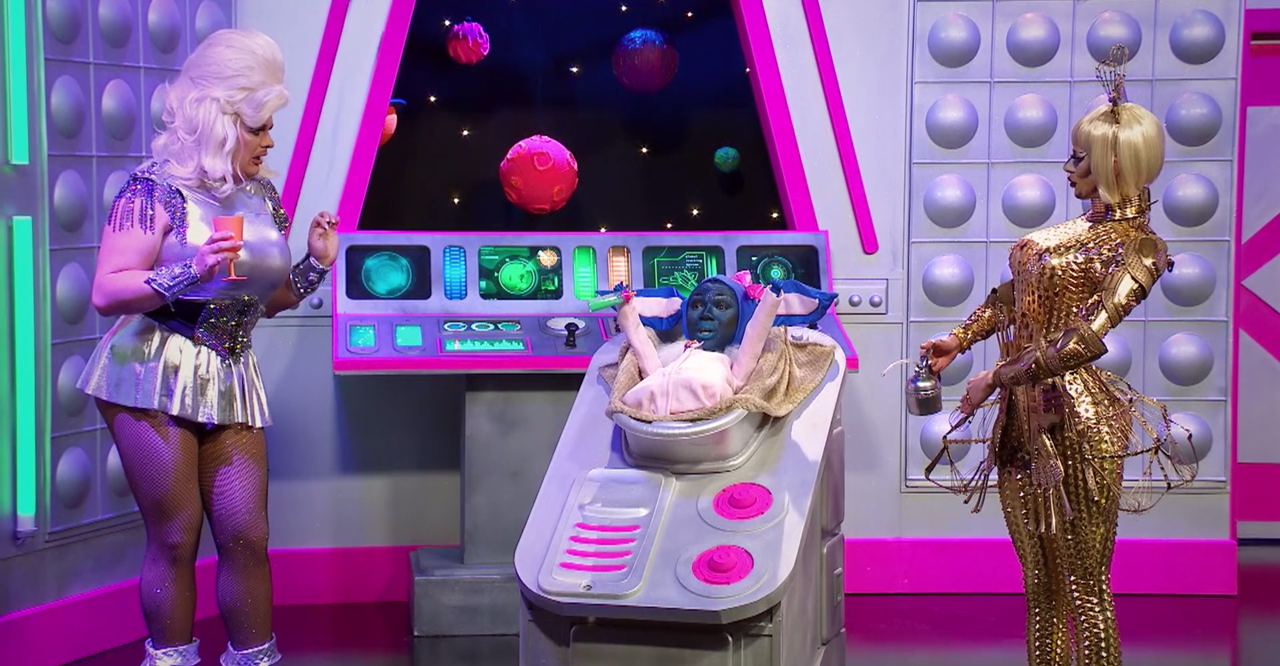 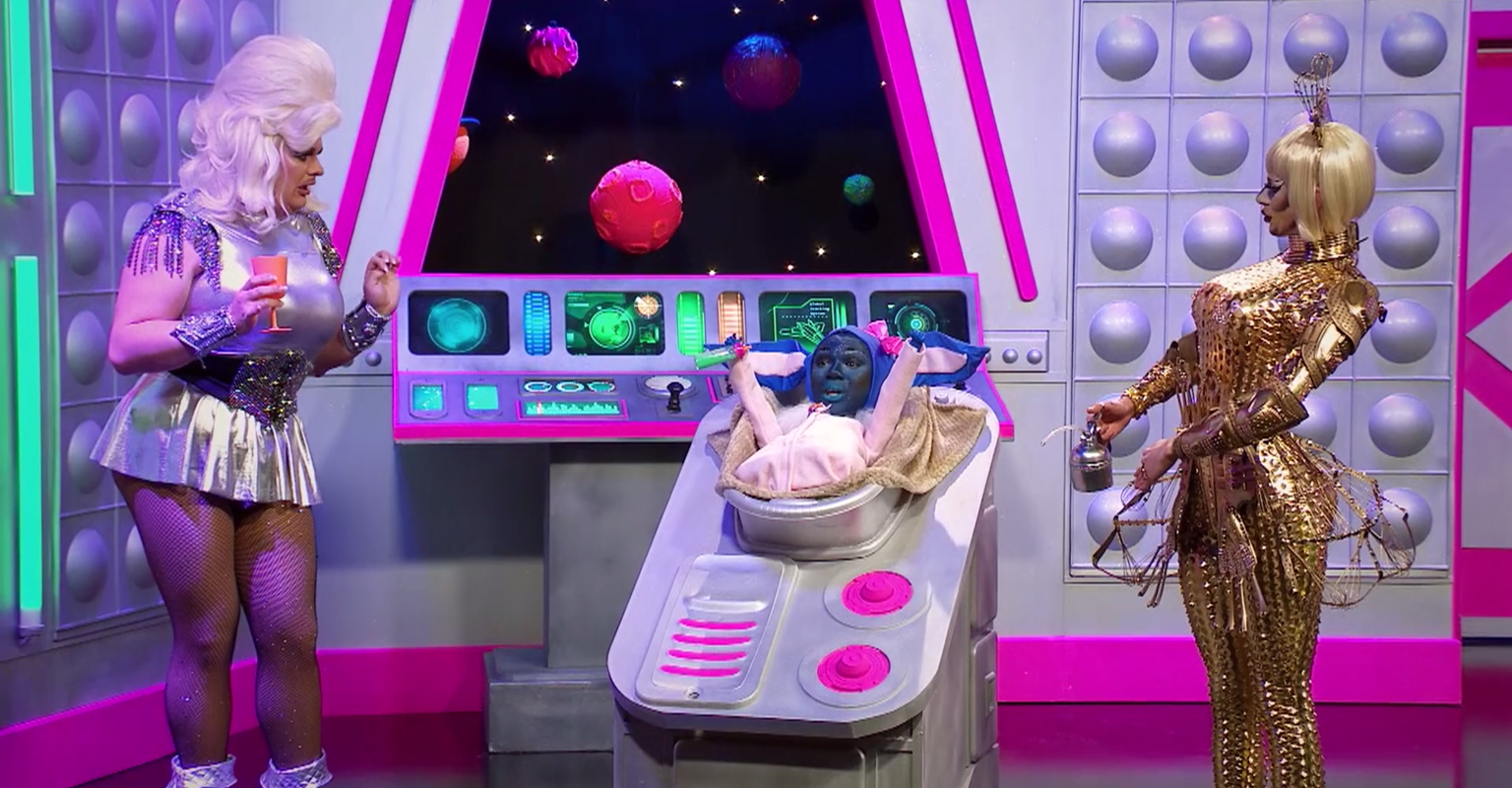 Welcome back to the INTO RuView, where we recap “RuPaul’s Drag Race” week by week. The eighth episode of “Drag Race UK” Season 3 saw the queens overacting in a classic scripted parody challenge, to … interesting results.

We pick up after Scarlett’s elimination, which left us with a top four of Ella, Kitty, Krystal and Vanity. And they’re pretty evenly matched — apart from Vanity, who’s lip synced three times. No one else has lip synced even once. The writing’s on the wall: if Vanity doesn’t win this week, her time is up.

Even though that’s kind of obvious, I wouldn’t have said it outright. Politeness and all. But Kitty puts it out there, saying she thinks Vanity is next to go. And Vanity just asks if anyone could actually beat her in a lip sync. Honestly? I’m not sure.

The next day, Ru comes in to announce the week’s challenge: Bra Wars, an acting challenge parodying sci-fi, particularly the “Star Wars” series. Not sure why we couldn’t have gone with a British reference as our source material — Doctor Ho was right there. But Bra Wars it is, and as last week’s winner, Kitty gets to assign all the roles.

She quickly snags the lead, Brabarella, for herself. But she can’t make up her mind on the other three parts. So naturally, she fabricates an entire casting agency. Welcome to the Kitty Scott Talent Agency!

Ella, Krystal and Vanity cycle through their absolute worst accents and Yoda impressions. Ultimately, the whole thing seems pretty pointless, but thank god Kitty’s injecting some fun into this season.

We end up with Ella as Daft Shader, Krystal as She-3PHO and Vanity as Baby Yolo. And on set with Michelle, the girls … look good.

Immediately, it becomes clear that Vanity has the weakest role, mostly because she has no hope of pulling off physical comedy. She’s a head in a box! Despite that, her performance seems, uh, fine. Certainly not the worst we’ve seen in a challenge like this.

Kitty is doing well — she’s the most natural speaker of the bunch — but she does trip up on one phrase: “space nut milk.” Why that phrase is in the script at all is anyone’s guess, but I like Kitty’s version better: space baby nut. But that’s a very different movie.

Krystal is trying her best, god bless her, but she’s just not as confident as the rest of the cast. And Ella, even while struggling with her costume and stumbling over some lines, seems like a natural actor. In other words, this challenge is going exactly how you’d expect.

The next day in the werkroom, the girls get into an overdue conversation about the dangers of doing drag in public. In a “Drag Race” bubble, it’s easy to forget that not everybody is a fan of drag queens, and being so visibly queer makes them especially vulnerable to homophobia.

Oh, and they touch on consent between queens and patrons. For some reason, folks at drag shows often feel entitled to touch drag performers at will. As someone who’s done drag myself, I’m all too familiar. Hopefully, getting these topics on TV means audiences of drag shows will know to be more respectful.

Is this look revolutionary for Krystal? Absolutely not. Does she look out-of-this-world gorgeous? Is her styling impeccable? Am I obsessed with that Cruella wig? Yes, yes and yes.

Ella gets the most points for creativity. Everyone else chose a protagonist, or a villain — Ella chose a true scene stealer, a minor character like an Oompa-Loompah who makes a big impression on their movie. Plus, this silhouette is super original. I’ve never seen anything like those … geometric chaps? Honestly, I don’t even know if I love this look. But I love the concept so much, I don’t really care.

Kitty is giving us “Titanic,” and she’s doing it pretty well! I only wish the hat were a touch less floppy, and that the skirt reveal were a touch less obvious. But I do love seeing Kitty in a different hair color for once. As she says herself, she’s showing the judges versatility!

This isn’t a bad look at all, but Vanity was done a few disservices here. First, by herself, choosing to wear this same orange color and SAME EXACT WIG (sans the top portion) on the runway last week. And second, by Symone and Utica over in the U.S., who pulled off this exact same “B.A.P.S.” look on Season 13 to much greater success. Overall, it just amounts to a “meh” for Vanity this week.

It’s time to screen Bra Wars: The Fempire Claps Back. Honestly, not the worst acting challenge the show’s ever churned out. All four girls are really committing to the bit, and there are no obvious bombs. But for me, Ella stole the show, particularly in her final scene. As the judges point out during critiques, her struggling to run her hands up her latex thighs is enough material for a film franchise of its own.

The critiques make it clear that nobody did bad this week. But we still need a bottom two, and everyone can see who it’ll be: Krystal and Vanity, who were just fine in the challenge next to Ella and Kitty’s amazing. So in Untucked, Ella and Kitty leisurely sip their cocktails, not a care in the world. I mean, there’s no way they’re lip syncing, right? Weeeeelllll….

Back on the mainstage, Vanity is called safe. Uh, Ru, you sure about that? Next, Krystal is called … safe. Leaving Ella and Kitty up for elimination. You can see the shock and terror clear as day in Kitty’s eyes. It’s perfectly valid — this judging makes no sense.

No sense, that is, until Ru reveals Ella and Kitty are the top two of the week, not the bottoms. There’s no elimination tonight — I guess Ru got a little slap-happy with that double elimination a few weeks ago. We’re running out of queens! So we get a non-elimination episode with a lip sync for the win. Kinda anticlimactic, but at least we get another week of all four of these queens who I’ve grown to love.

Ella and Kitty lip sync to “Something New” by Girls Aloud. Ella’s mostly giving sex (depsite being dressed as an Oompa-Loompah), while Kitty goes for comedy. And both are killing it! Personally, I think Kitty won the lip sync. But I wasn’t mad at all to hear Ru announce a double win, considering Ella did better in the maxi challenge. Besides, more badges for all means a closer race heading into the finale!

So, we’re still at a top four. And the actual challenge to decide the top three is a roast of the eliminated queens. Huh. Honestly, I don’t have much faith in these four to turn out a comedy challenge. But hopefully they can at least be iconic, as “Drag Race” roasts so often are. Exhibit A: