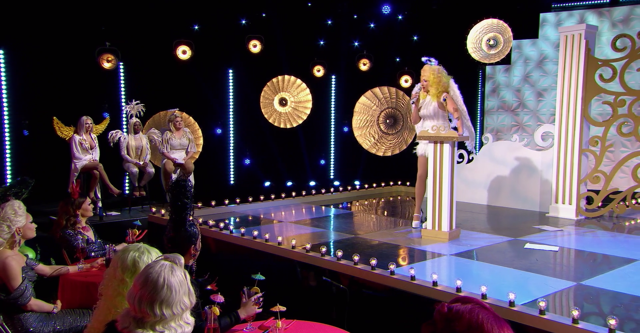 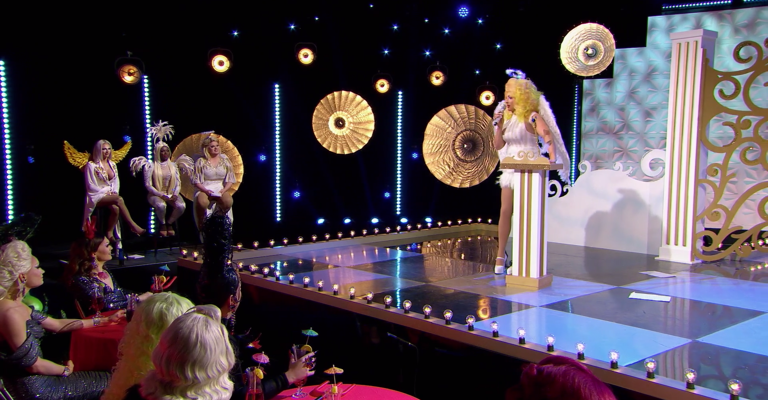 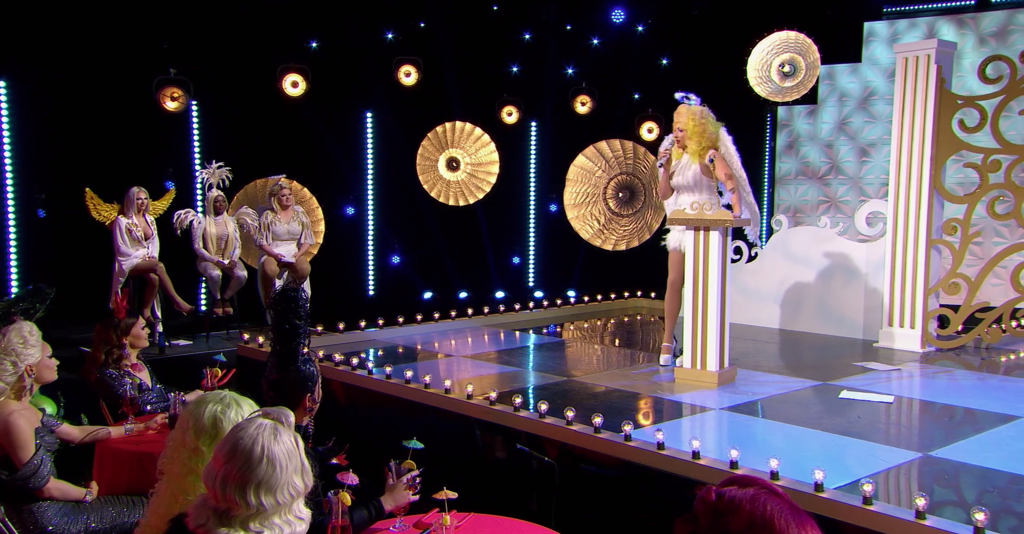 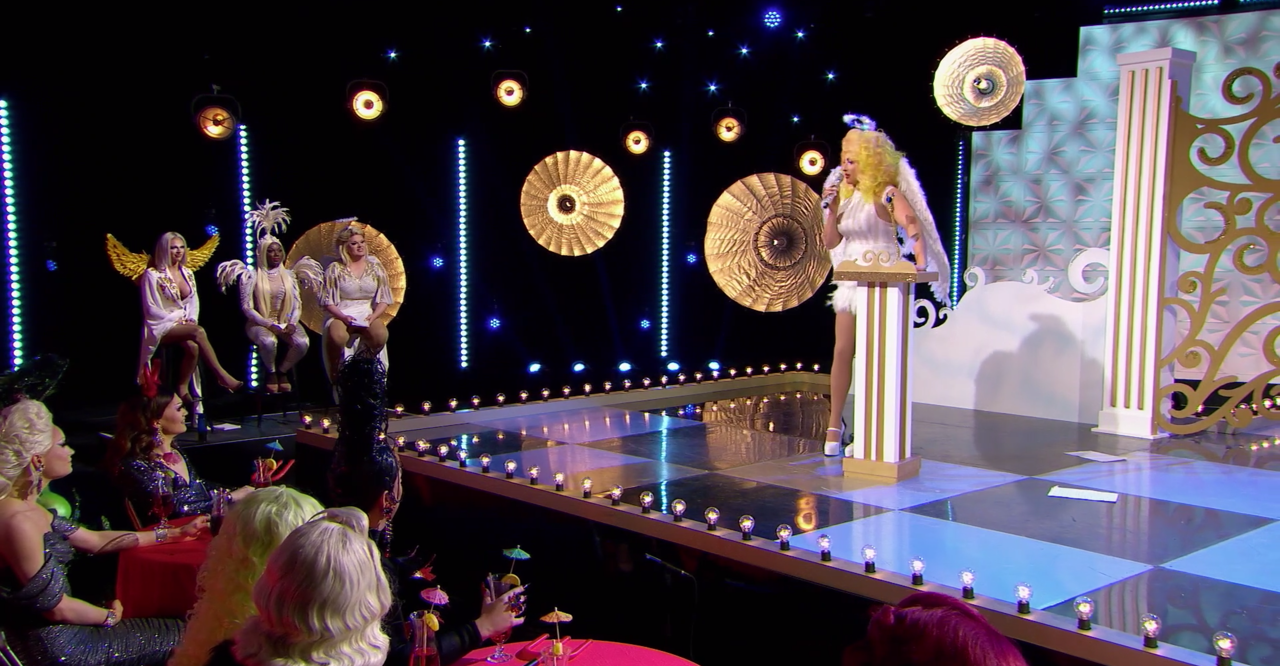 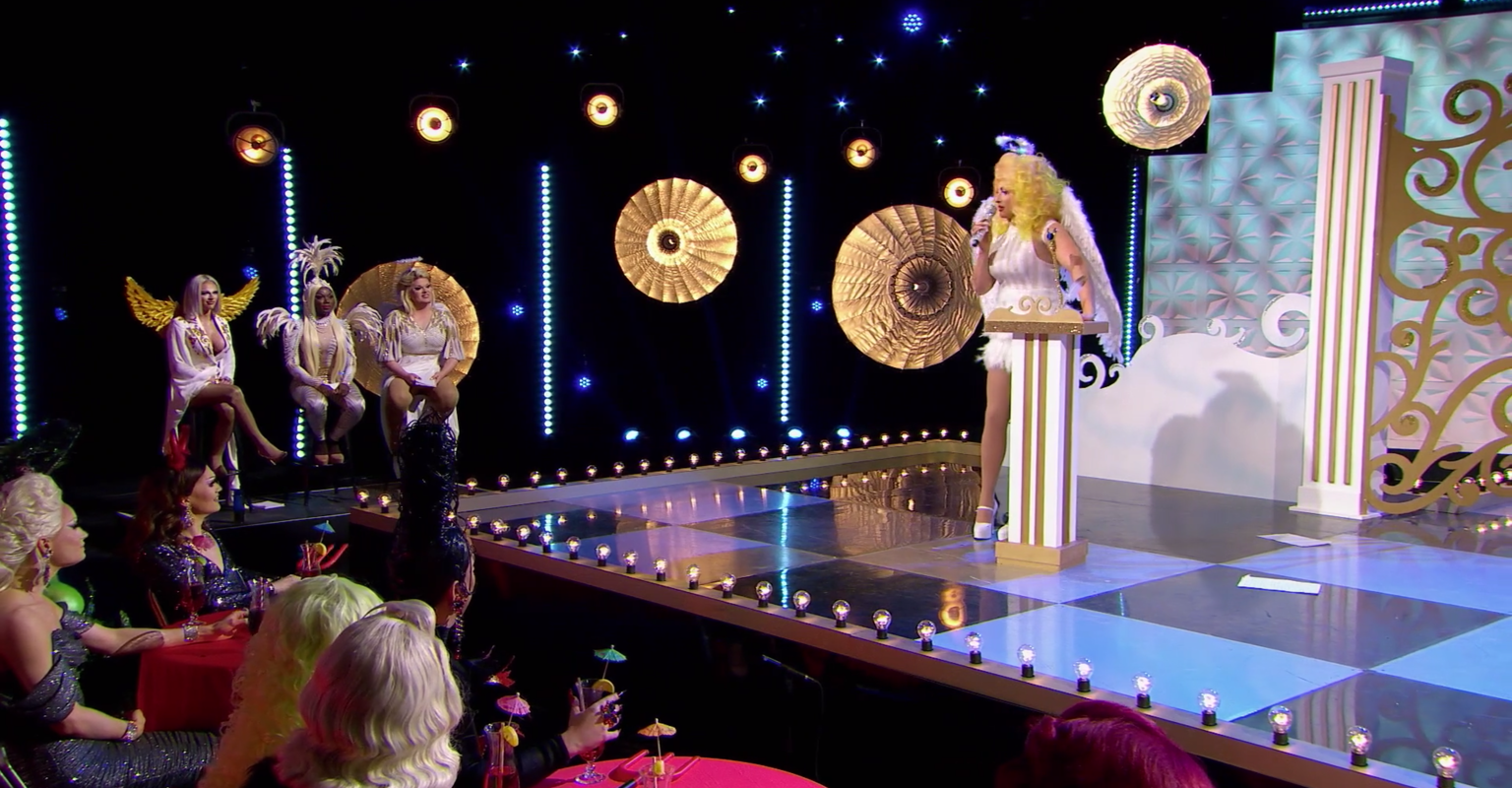 Welcome back to the INTO RuView, where we recap “RuPaul’s Drag Race” week by week. The ninth episode of “Drag Race UK” Season 3 saw the queens making fun of themselves, the judges and the eliminated contestants in a roast with some serious highs and lows.

We pick up after last week’s non-elimination and double win for Ella and Kitty, still leaving us with a top four. Ella decides to take stock of everyone’s track record — easy to do when you have the best one. She’s now sitting pretty with three wins and no bottoms, just ahead of Kitty and Krystal with two wins and no bottoms each. And Vanity … is still here!

“So I guess that means I’m in the lead, right?” Ella asks. Okay girl, yes, but let’s not get a big head. That big wig will suffice.

The next day, Ru announces the challenge that will actually determine the final three: a roast. The Pearly Gates Roast to be precise, in which the queens have to deliver reads on themselves and on an audience of their eliminated sisters.

Hearing the challenge’s premise alone, you can pretty accurately guess how it’s going to play out: Ella and Kitty will come out on top, and Krystal and Vanity will duke it out in the bottom. It’s just the details that are fuzzy, so let’s get into them.

The first complication: Ella, as the queen with the most badges, gets to choose the show order. Does this actually have any bearing on queens’ performances? Not really. Does it always stir up drama regardless? Without fail.

As it happens, though, the other girls’ requests perfectly line up with Ella’s scheming, so everybody’s happy! Krystal will go first, followed by Ella, then Vanity, then Kitty.

Next, the queens take the time to write their jokes. Kitty can’t stop chuckling at her own comedy — I’m getting Season 5 Alyssa Edwards. Anyone else? No?

All of a sudden, the girls are doing their makeup. No going home and coming back for elimination day?? Apparently not — the episode just chugs along. Having to write a roast set sounds stressful enough, but having to write it on a time crunch, get into drag and immediately perform it? A Herculean ordeal.

That means we’re already to the challenge. Krystal opens the show. Honestly, it could’ve been much worse, but it wasn’t good. As Ru later calls out in critiques, all of Krystal’s jokes center on her age and her virginity, even when she’s roasting other people. It doesn’t leave her much room to be versatile.

Ella kills her set, literally from the first words out of her mouth (“Hello hes, shes, theys — and Michelle Visage”). My favorite joke of hers was directed at Krystal: “If I’m ever in need of a brain transplant, I’m picking yours, because it has not been used yet.” There’s zero dead air, she’s oozing charisma, she’s rarely looking at her cards. It’s a masterclass in roasting.

Vanity is, sadly, the worst of the week. She lack both confidence and comedy. There’s a moment where it seems like she’s about to read everybody to filth, stepping out from behind the podium and pointing at Charity in the audience. “Oh, you bitches trying to come for me? Sitting there looking like the, the, the, the — some green ass bitch.” Damn. It was almost something! But it wasn’t.

Kitty is last, and she does well! Frankly, the funniest part was her anecdote about being mistaken for her own mom’s mother at age 14 — which, by the way, she’s since provided photographic evidence of:

Just sharing some snaps from my holibobs when I got mistaken for being a mum of 6 aged 14 pic.twitter.com/d8hGdAtga1

Though she’s funny, Kitty’s jokes do ride the line of just a little too mean. She’s also overly reliant on those note cards. Not to harp on the negatives — she’s funny! — it’s just a shame we’d already seen Ella’s superior set at this point.

Category is … Oh My Goddess

Kitty has never looked better. Actually, nobody’s ever looked better — this is my favorite look of the season. I’d also have gone the Greek goddess route for this category, so I was glad to see it represented. Beyond that, I mean, come on. I see literally nothing wrong with this. It’s a shoot from me.

In classic Krystal fashion, this look is polished and expensive as hell. There are few things I love more in this world than velvet. No complaints.

This is a different look for Ella, and it’s a nice change of pace! The bodysuit is gorgeous, if a touch simple. She points out that it’s her first time wearing a human wig, and unfortunately, it doesn’t really pay off. This look would have been served by some sky-high synthetic hair.

This is a good look. Had this category happened early in the season, Vanity would likely be middle of the pack. But at this point in the competition, details like her exposed undergarments and relative simplicity of her outfit drag her to the bottom of my ranking.

Backstage, each queen gets a message from their loved ones. It’s cute, but I can only watch so many encouraging words before they start to blend together. Moral of the story: everyone is very loved, and everyone has a new fire under their ass to fight in the competition.

Ella is announced as the winner of the challenge! So deserved. Every time Ella wins, it’s indisputable, to me. Winner material, methinks.

And there’s no need for suspense: Kitty is safe, leaving Krystal and Vanity in the bottom. It’s Vanity’s fourth time, so she stands almost no chance of winning, but it’s still a good fight. The two duke it out to “Hallucinate” by Dua Lipa. This year alone, we’ve seen “Drag Race” lip syncs to “Break My Heart,” “Don’t Start Now,” “Physical” and now this. We’re getting into non-single territory here — before long, all of Future Nostalgia will get the lip sync treatment, and I’m not mad at it.

I think getting the chance to lip sync is actually great for Krystal at this point. She’s been flagging for weeks now, so the opportunity to flex her moves is a good reminder that she is, in fact, a truly excellent drag artist.

At the song’s climax, both girls do a split. I tried to capture it. It didn’t work.

Krystal stays, of course, and Vanity sashays away as one of the season’s brightest stars. Her “Scandalous” lip sync will go down in herstory, and if a UK version of All Stars ever hits our screens, I hope to see her there.

Next week, it’s finale time. Objectively, Ella’s done the best, nabbing four wins and never even placing below safe. Of course, we saw how well getting four wins worked out for Bimini last season … really, it’s anyone’s crown for the taking, and I wouldn’t be mad at any outcome. But for what it’s worth, Team Ella!