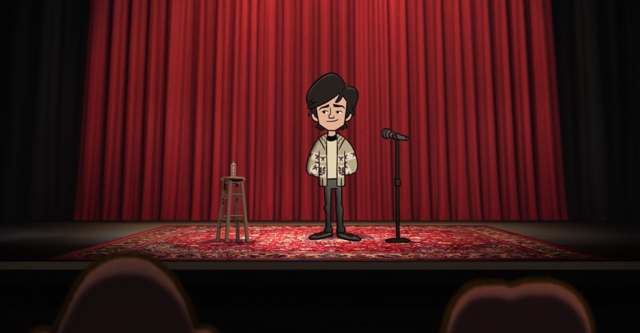 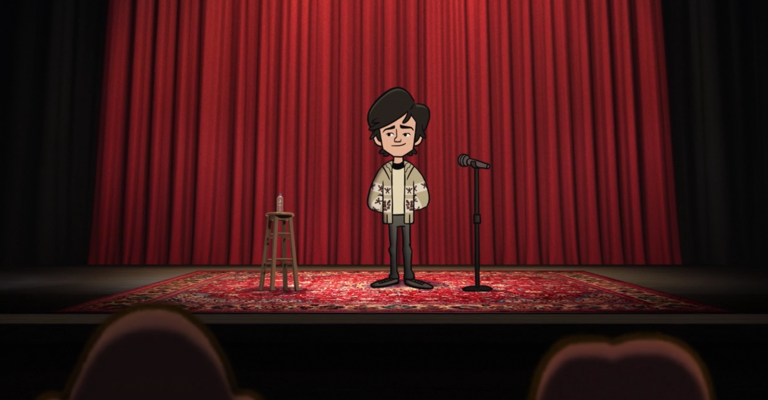 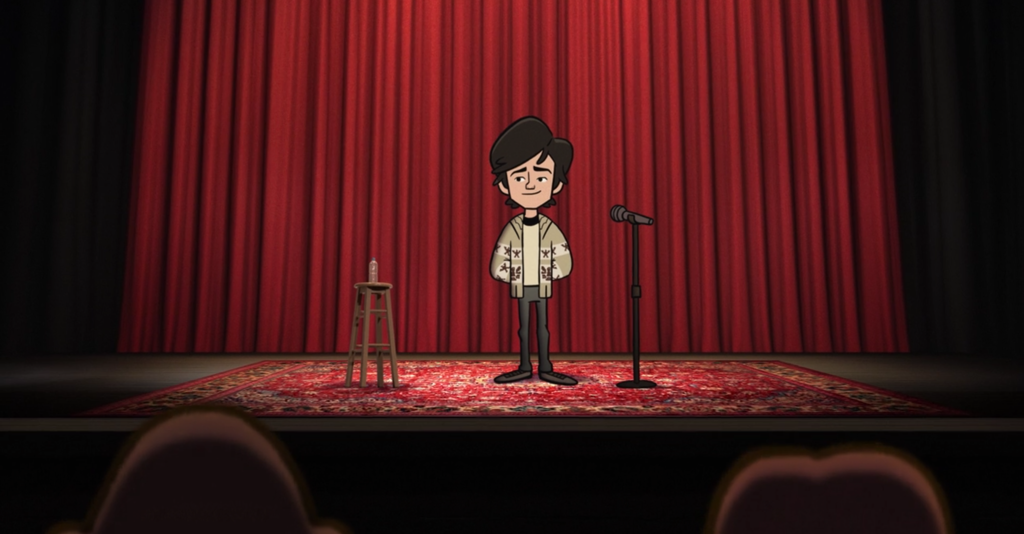 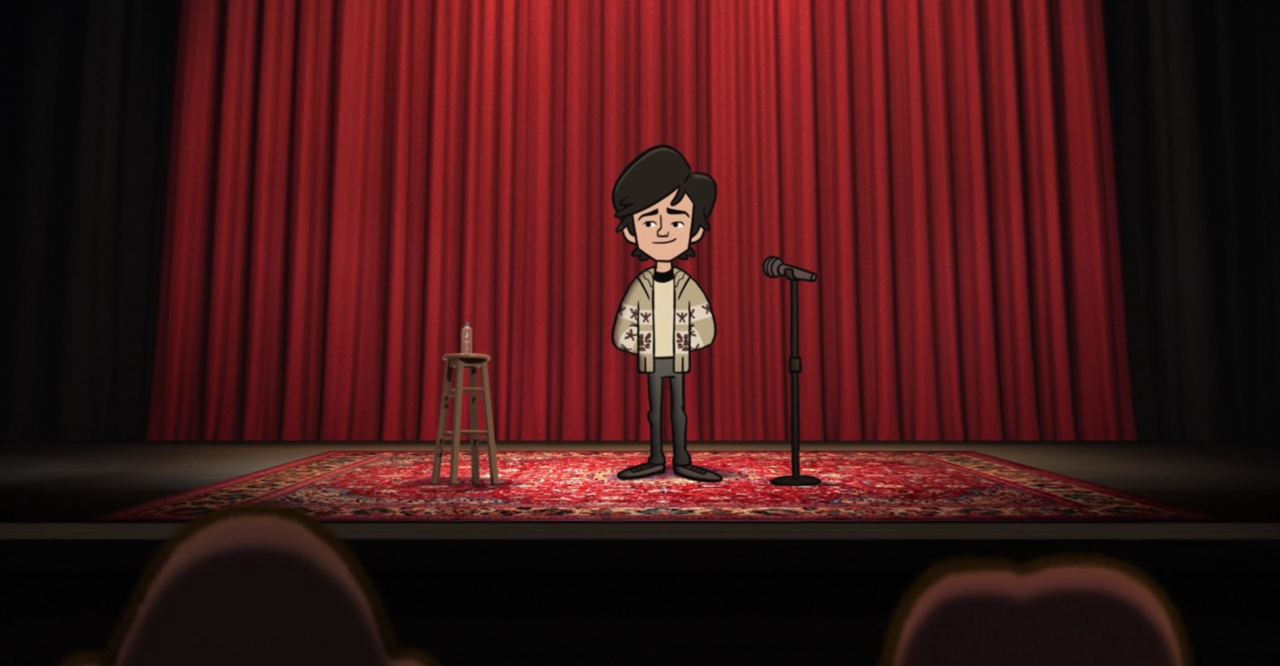 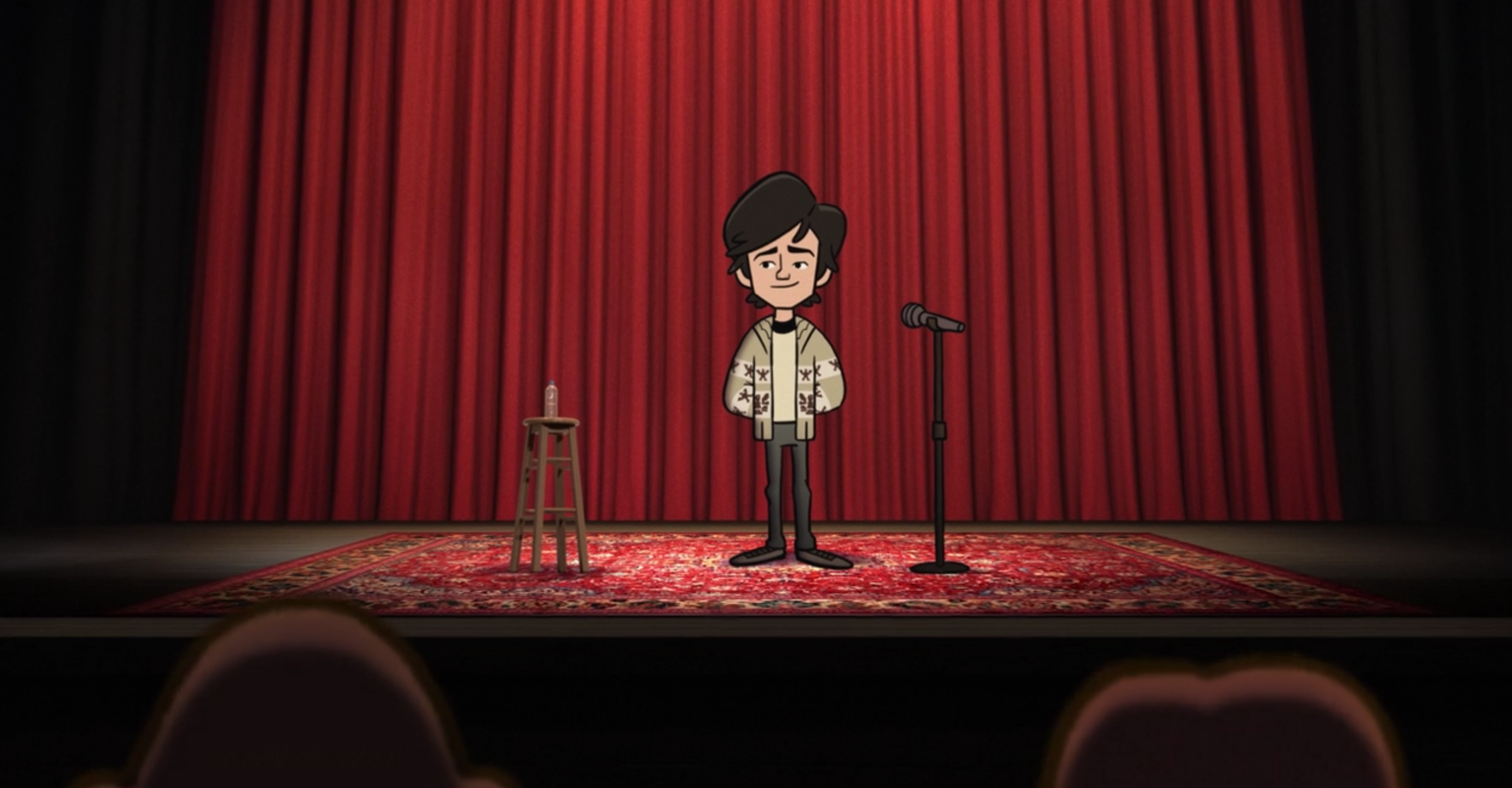 I’ve never been a big fan of illustrated specials. That’s not to say I haven’t tried to like them: I was raised on the animated version of Mel Brooks and Carl Reiners’ “The 2,000 Year-Old Man” and, for a time, got really into the “Idiot Abroad” animated specials. But mostly, they’re not my bag, baby. I find them often cutsey, over-literal, and just kind of unnecessary. Comedy, at its best, looks inward rather than outward for laughs, so the concept of an animated special can often have the opposite of its intended illuminating effect.

But once I found out Tig Notaro was doing an animated special, could wild horses tear me away from watching?

No, they could not.

“Drawn” is lesbian comedian Notaro’s latest stand-up special, and it’s got a few standout themes. Extreme pain is one of them, the lie of self-sufficiency is another. At the core of all Notaro’s stories about pain and illness is a sense of gratitude. To borrow the title from her 2018 stand-up special, she’s still “happy to still be here,” even if she’s still kind of fuzzy on the details of how she survived it all. If you’ll recall from Notaro’s past work, a few years ago the comedian was hit with the double-whammy of a cancer diagnosis and the death of her mother. And that was hardly the end of it.

The 2015 Amazon original series “One Mississippi” fictionalized this plotline, showing Tig (a version of her) returning to her Southern home in the wake of her mother’s death and her own cancer diagnosis to try and sort out the problems of life and death alongside her emotionally stunted brother and WASP-y father-in-law. The show was heavy, deep, and often hilarious. It was real and honest about loneliness and dating and trying to piece together the story of a traumatic childhood sexual assault. It was a sweet, quiet show that only lasted two seasons, not because it wasn’t wonderful (it was and is) but (probably) because Louis C.K. executive-produced the show before the #MeToo movement kicked off. After C.K.’s abuses of power surfaced, the show drew attention to this subtext via a call-out plotline, only to fail to be renewed for a third season. Pamela Adlon’s wonderful “Better Things” suffered for its C.K. associations as well. But while that show finally got back on its feet after a long hiatus, “One Mississippi” remains lost. And while “Drawn” draws on some of the previous show’s source material, it doesn’t leave a lot of room for the same kind of thoughtful tenderness that became the show’s trademark.

“Drawn” has a few standout themes: Extreme pain is one of them, the lie of self-sufficiency is another.

That’s not to say that “Drawn” doesn’t get deep. It does, and quickly: one moment, Notaro is recounting her double-mastectomy, joking about how her boobs have probably ended up “in a dumpster in Hollywood” somewhere¹. The next, she’s talking about how she discovered an ex didn’t reciprocate her love. How did Tig find out? When she asked to be driven to and from the hospital for a wisdom tooth removal procedure, the girlfriend (self-employed) declined. The story that follows—about Notaro driving herself home from the hospital without painkillers—is harrowing, but not as harrowing as the dozen other health-related anecdotes that find their way into the special.

Notaro has experienced, in the course of a few years, internal bleeding, a cancer diagnosis, incontinence, and chronic pain. Her pain doesn’t leave a lot of room for friendships or relationships, but she finds a way to prioritize them anyway, relaying a story about proposing to her wife, Stephanie Allynne, while hospital attendants attempted to place a bedpan under her after an onstage collapse. She talks about a fantasy she had during one road trip, in which the soundtrack to the drive, Dolly Parton’s “Two Doors Down,” becomes the chilling accompaniment to a brutal, imagined car accident. All in all, we get a peek into the mind of someone for whom chronic illness isn’t just a nuisance or a constant struggle. For Notaro, illness informs the way she sees the world. “Drawn” gives us just a sample of what it might be like to live in a world where there is no assumption of physical safety, where the very body that’s keeping us alive might decide to betray in some new horrible way overnight. It’s a scary, but very honest world, and I’m appreciative of this glimpse into it.

But does it compare to the glory of a Tig Notaro sitcom? Not really. Will we ever get another chance to see something like “One Mississippi,” or is the time for all that past? I hope not.

Honestly, whatever Tig’s got for us, we’ll take it. ♦

¹I, too, have had a double mastectomy and I often wonder where my boobs ended up, so this struck a chord.