Shequida Hall (AKA Gary Hall) is a classically trained opera singer, songwriter, and playwright who migrated from Jamaica to New York and eventually trained at Juilliard. But then drag happened. Now she’s combining her spellbinding voice with sickening lewks to take drag performance to a classy new level. We chatted with her about her love of opera, her unexpected career transformation, and why she should be able to sing in any damn role she wants. 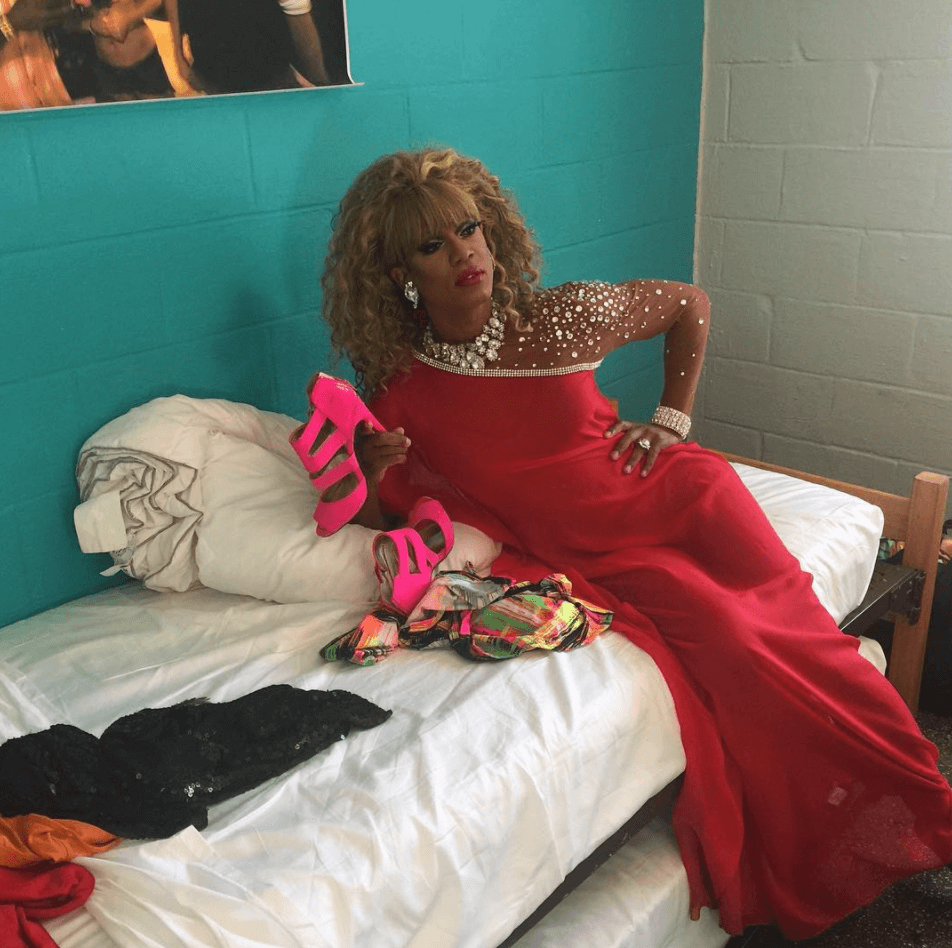 Grindr: What memories do you have of Jamaica?

Shequida: I was very young. A 12-year-old in Jamaica back then is not quite the 12-year-old you find nowadays – especially in New York. I have some great memories. Jamaica is a beautiful place. Ultimately, we left because the relationship between my mom and my dad was terrible. Luckily for my mom, she decided to leave and take us with her.

First of all, I had never been on a plane in my entire life. Then, I got off the plane and my mom was standing there and I was like, “How is my mum on the plane” and my sister was like, “You dummy we got off the plane an hour ago.” I didn’t know because in Jamaica you had to actually go down onto the runway and here in New York there’s a jetway and everything, so it was quite a learning curve. The one thing I learned very quickly was racism. There’s no racism in Jamaica because we’re all black. 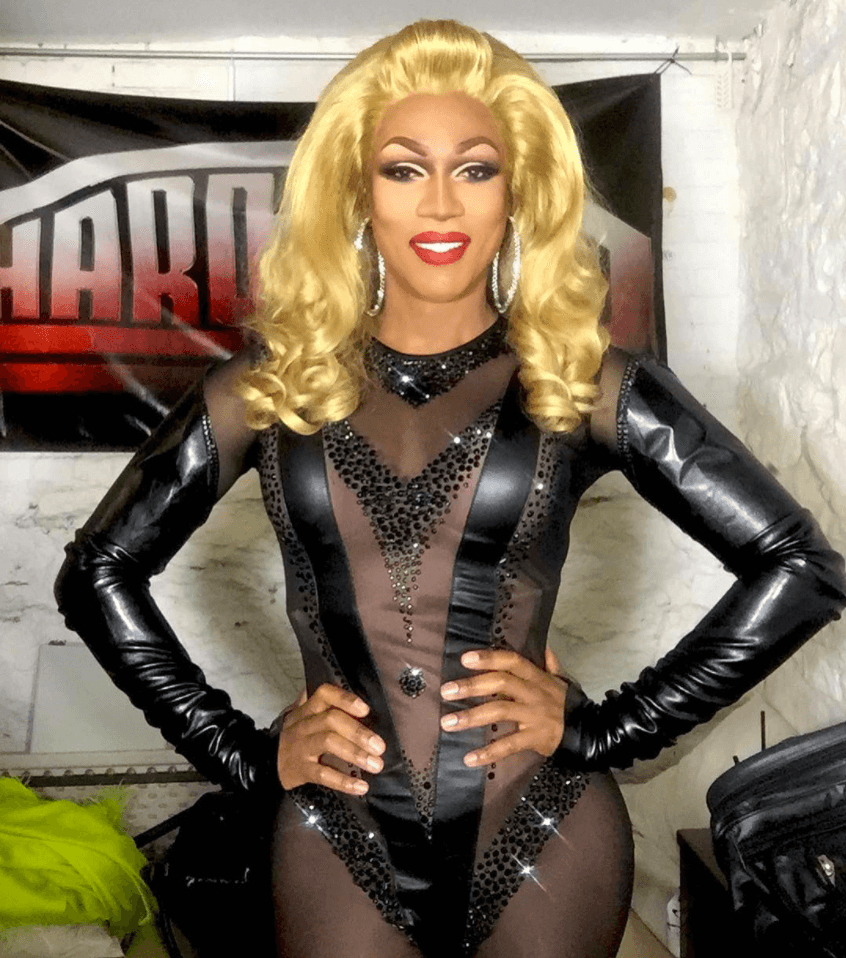 When you say you learned about racism, what do you mean?

I just realized moving here that people treat you differently because of the color of your skin, not because of what you do or who you are. I think the first time I realized that was when I was getting on a bus and the bus driver yelled at me for not paying my fare when it was some other guy who didn’t pay his fare, and that guy was white and I was black. My mom tried to explain it to me, but I was so naive that I didn’t understand. I would see black women pushing strollers of white babies, and I thought, “Oh my god, black women in New York are so generous they adopt white babies” and then my sister was like, “No silly, they’re the nannies.” It was stuff like that that I had to learn very quickly.

Did that influence or inspire you to pursue drag?

The struggles of being not accepted or racism and prejudice in this country did not have an effect on me doing drag. In fact, I never wanted to be a drag queen. I never really was a feminine guy. When I first moved here, I used to have long straightened hair and people always thought I was a girl – I remember going to Macy’s once, and the counter girl was like, “Would you like something for your little girl?” and I screamed, “I am not a girl! I am not a girl!!” So I never wanted to do drag, it was so out of my realm. I thought I was going to be an opera singer and it was going to be great. And then I went out once and somebody put some crap on my face and put a hat on my head. They said it was a costume party – you had to be in costume or else you wouldn’t get into the club. I was 19 and thought, “ok, whatever.” At the time, my mind was so laser focused on the classical world that I had never been to a club before, I had never had a drink before, I didn’t know what nightlife was. Then I went to this club in a crazy get up, and I was the first one picked out of the entire group of us to go in and then someone offered me a job that night. They said “you look great, do you want to work here?” and I said, “Do you want to pay me for this? Okay.” And that’s how Shequida began. 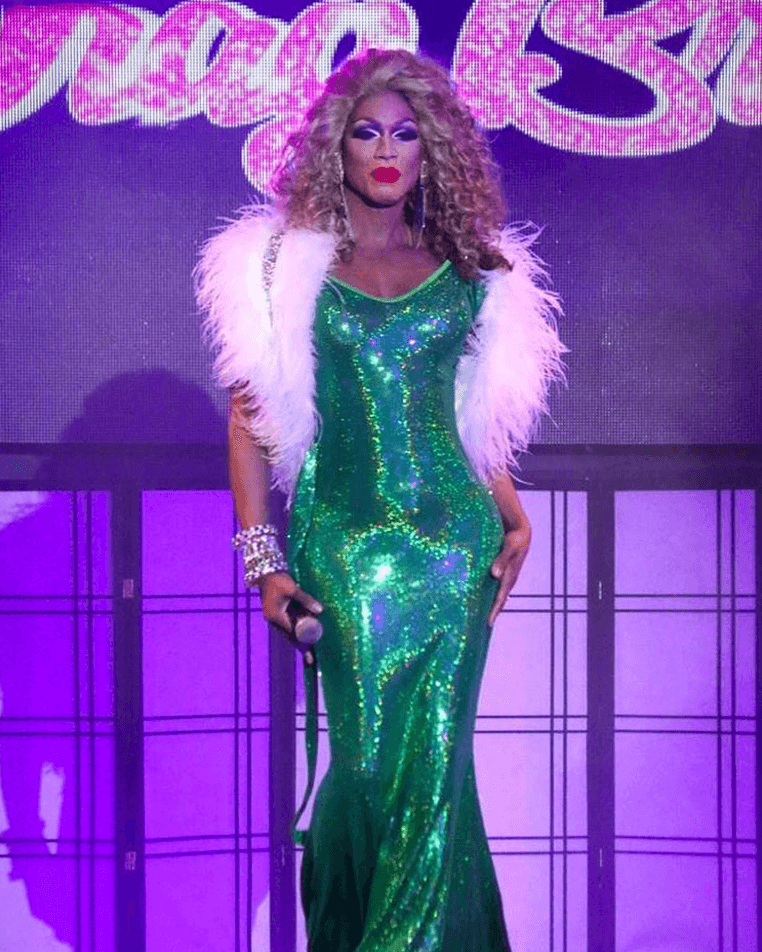 Did Shequida stop you from pursuing a career in opera?

Shequida and opera were, for me, two separate things. Shequida, in the beginning, was a side job, a weekend job, a way to make money. I didn’t really think anything about it. I wasn’t that invested in it. I went to work on the weekends, did my drag, then went to school during the week and studied opera, so they were completely separate entities.

Can you tell us about the beginnings of your opera career?

I started falling in love with opera when I was 14 years old. I was always singing; I was always an actor/ singer – I did a lot of commercials in Jamaica. When I moved here, I went to a performing arts school for a couple of months before going to LaGuardia High School of the Arts to study singing. Then, in my sophomore year, they took my entire class to the New York City Opera to see “Mephistopheles.” If anyone wants to get into opera, just show them that. It is just brilliant; I was hooked after then. So I told my teacher that I wanted to study opera and, sure enough, she said, “You can never go to another gospel chorus.” There were so many restrictions and I thought, “Gosh this is a lot,” but I loved the music and drama so much. There’s so much force behind it, so much energy and power, so I started studying opera and then I was one of three students ever, at that time, to graduate LaGuardia and go to Juilliard.

Then I studied for three and a half years at Juilliard, and just got more and more disillusioned. Once again that whole racism thing crept in, and while I love opera – and I realize this sounds terrible – but I don’t really see race. I don’t realize I’m the only black person in a room until somebody points it out. My teacher was a super famous opera singer at the time, Simon Estes, and he started grooming me. I said I wanted to sing certain things and he would be like, “oh no… you’re black.” There was always this racist fight where I was told, “You’re only going to be signing Negro spirituals for the rest of your life.” I was like, “Negro spirituals?? I don’t even know what a Negro spiritual is.” It’s just a cultural thing. I guess if you grew up African American then yes…but I grew up Jamaican and became American so it wasn’t what I wanted to do, and I got more and more disillusioned. So I left, and I didn’t know what I was going to do and drag just sort of became more and more and more. 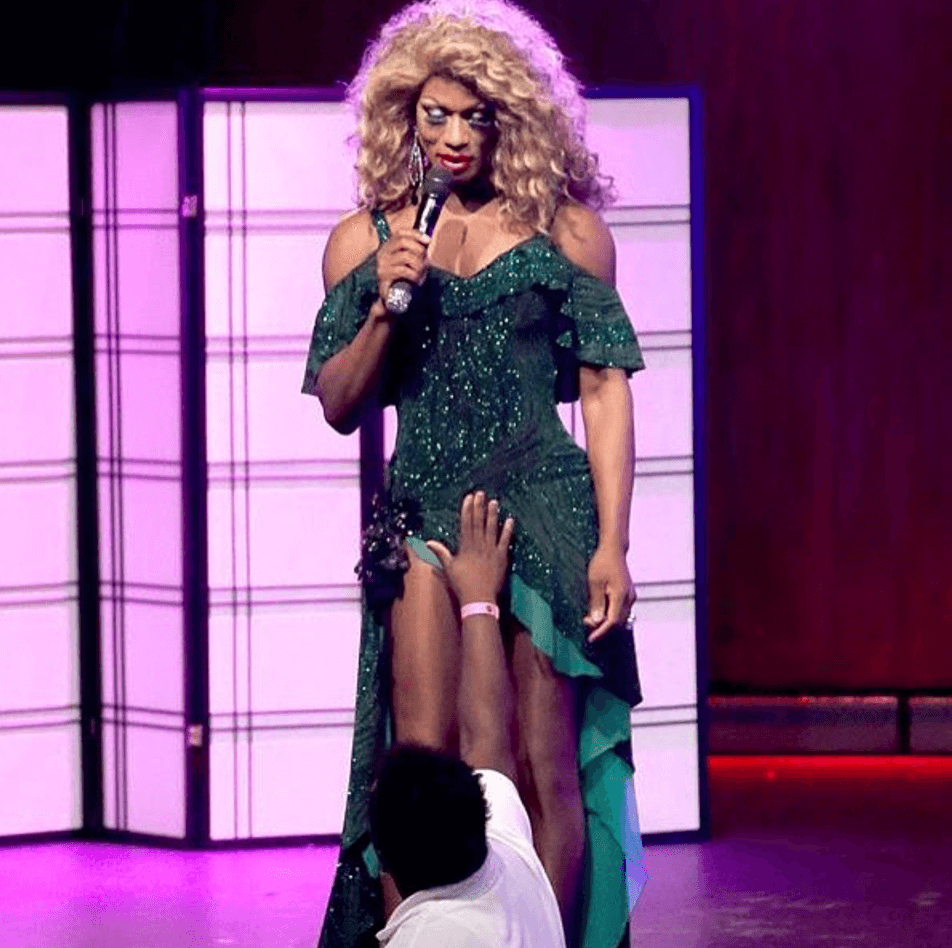 Has the classical world informed or influenced your drag?

What did it mean to you to return to the opera 20 years later after you had had difficulties there when you were younger?

When I returned, I did that special guest spot at the New York City Opera. I was frightened – because this is the New York City Opera, this is the big leagues. This is not a nightclub, this is not a bar where people don’t really know. These are trained professionals. These are people who spend hundreds of thousands of dollars to see opera. So to go back there, it was completely nerve-wracking, but it was also a full circle. I remember seeing some of the ushers I knew. I would go up to them and say, “Hi do you remember me?” and they would be like… yeah, Gary, the annoying little 17-year-old boy.” Because I was always running around the opera house singing and just being young – for them, they were in their forties or fifties that was their career, and I was just like, “Oh my god, let’s be amazing – we’re young!” So going back and performing was amazing. I got the full treatment and I thought, “Now I see how people can turn into divas when you’re treated like this.” It was great. 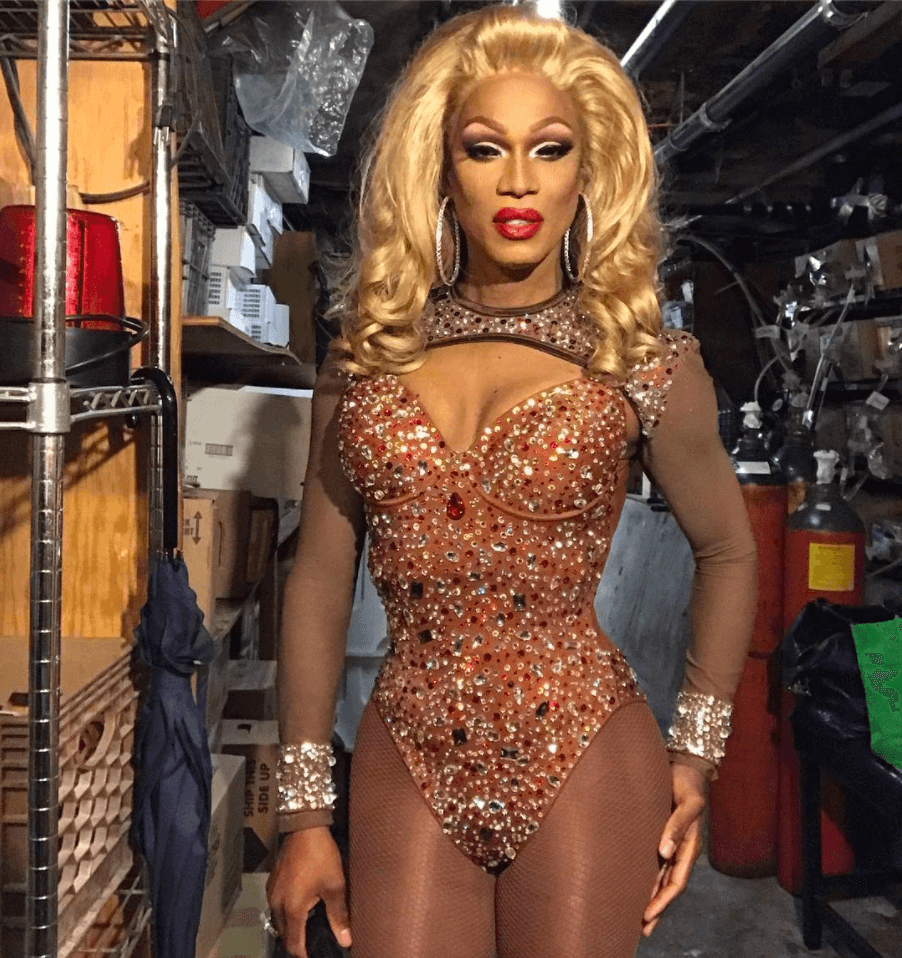 What do you envision for the future of opera and drag?

For the future of opera, I hope it embraces the alternative and evolves as the world is evolving. We see that you can have a black person lay a Mozart role, you can have thin, fit people that are opera singers. They don’t all have to be 700 pounds. You can have countertenors – you can have contralto – you have all these different types of voices. My voice teacher was this amazing, very strict, tiny woman, super famous in the music world. I remember her saying something to me which blew my mind. She said opera is totally fake. Signing is not a natural human state. When you hear an opera singer putting down a pop singer or the other way around, or you hear different kinds of voices putting each other down, I always go back to the same thing that she put in my mind. Singing is not a natural state; it’s literally taking something that’s unnatural and creating a sound. We speak in a four or five note range, but Mariah Carey would sing in a five-octave range and that’s not natural. So I could listen to someone like Janis Joplin or a pop singer and say that she’s just screaming, but she’s making a sound which is affecting people. Opera singers make a sound which affects people – heavy metal and rock singers make a sound which affects people. They’re all completely different. When you have a drag queen or a man that sings a five-octave range it shouldn’t be weird. It’s a sound that is literally affecting you. That is art. 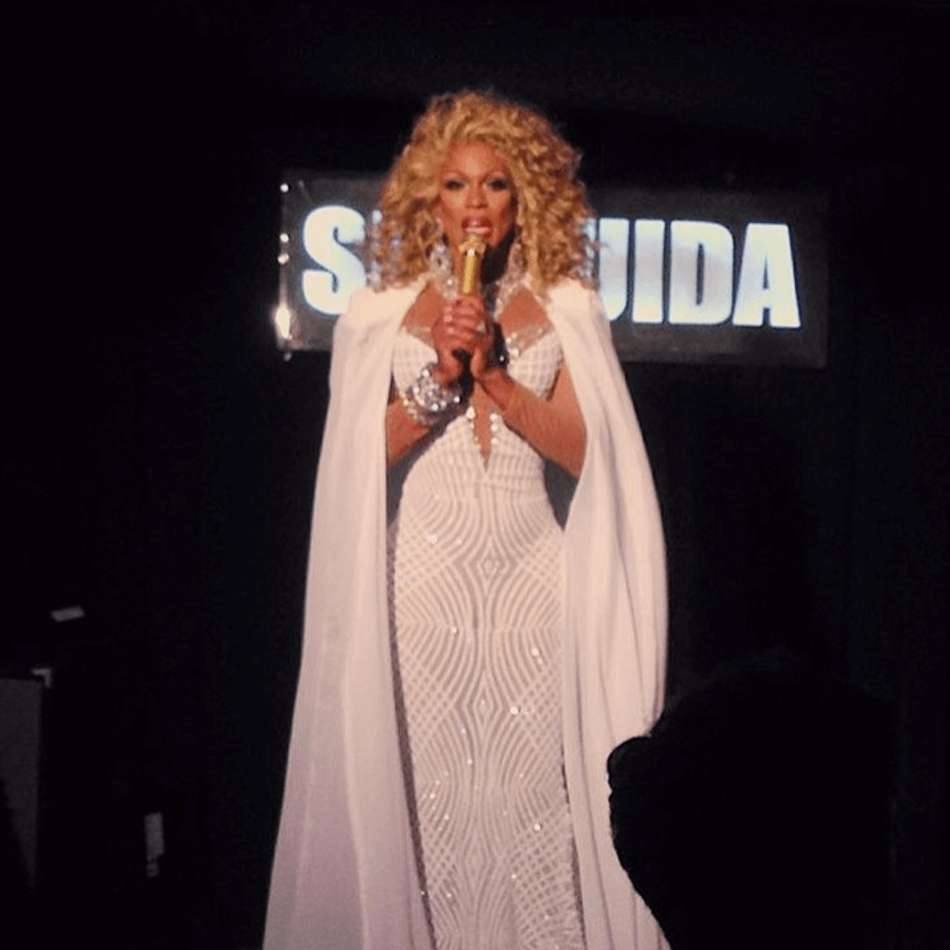