Over the weekend, word spread about a new website, C*ckblocked, that tells users how many and which Grindr users have blocked them. (In order to access this info, users have to give up their Grindr user name and password, so, as usual, exercise caution before giving those out.)

“About two weeks ago I discovered that Grindr actually gives each user the profile IDs of all the users who blocked you on the app,”Trever Faden, the creator of the site, told Queerty. “They don’t display it anywhere on the actual app itself, but the data is there.”

“So, I decided to build C*ckblocked,” Faden said. “Basically you can login with your Grindr creds and it’ll show you all the users who blocked you on the app.”

While many on the internet found the app to be a fun distraction, some men of color on the app found a pattern among those who had blocked them: mostly white men who had they had never spoken to.

I asked men of color to share who blocked them on Twitter, and most of the answers were the same.

Oh how funny. Mine is about 10% people I know, 10% people I messaged, and the rest are strangers. Of the strangers, about 75% of them are white and at least half of those are the headless buff torso variety.

Blocked by 725.
A lot are in my neighborhood, but a ton are in different cities – even international. 🤷🏿‍♀️ pic.twitter.com/9906lFtwOM

Mine is literally like 90% white or white passing guys but Boston is also very white, especially on Grindr so 🤷‍♂️ 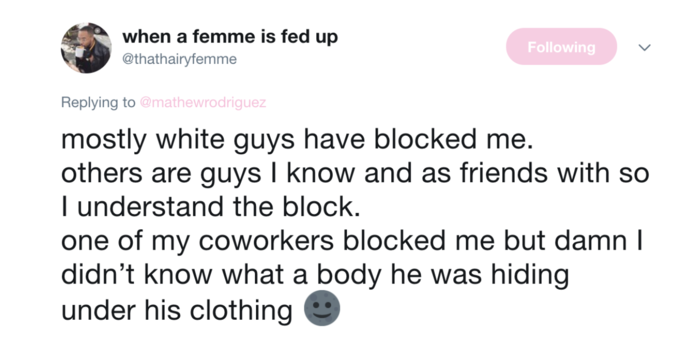 One person, Harry, who used the service told INTO that he was “genuinely surprised” by the list of men, mostly white, that had blocked him.

“I don’t interact with a ton of people on Grindr, so seeing 700+ blocks took the air out of my lungs a little bit,” Harry, who preferred to go by his first name, says. “I sat there for a second and wondered what I could’ve possibly had done to warrant the ire of some of those people.”

He adds, “When the racial implications got brought up, it was a little disheartening. It was just another reminder how much race is an issue for this community. It was a bit of a bummer! But I found out shortly before going to a bar so I felt better immediately after.”

Another queer friend of color urged his friends on Facebook not to check their answers “unless you’re ready to cry.”

Most of my friends of color were not upset about their being blocked. Rather, they were surprised to see how many people around them had just chosen to block a person of color without speaking to them. These people may never know they were blocked, but C*ckblocked did raise the question of whether they were blocked solely for their race.

It’s no secret that it can be difficult to be a person of color on Grindr and that white gay men are often allowed to discriminate without repercussion. No, my study was not scientific at allbut it’s no coincidence that a lot of men of color found that white men they’d never interacted with had blocked them for seemingly no reason.

This site serves as a reminder that, while there is blatant racism on dating apps, there’s also a lot of covert waysmicroaggressions, if you willthat people can show their discrimination.