Like most closeted 17 year olds raised in an Orthodox community, I did not think being gay or Jewish was remotely chic. Eventually, I graduated from high school and came out; three years, two Lady Gaga albums, and one British boyfriend later, I loved being gay. But I could not forgive my Jewish schools, teachers, synagogues, and mentors for leaving me in the dark my first 17 years. Out of anger, I did my best to create a life devoid of any Jewish affiliation. I failed epically, primarily because…I am the most Jewish person ever. Everything about my curly hair, chest hair, mild anxiety, and Barbara Streisand obsession screams American Jew. It got to a point where people would laugh in my face when I tried to deny that I was Jewish. Faced with a serious problem. I used the gay heritage I loved as a framework to understand my inextricable but wholly unwanted Jewish heritage. I found that I like being Jewish for the same reasons I like being gay. This comes as no surprise because the gay and Jewish communities have a lot in common.

Jews and gays have always existed and lurked in the shadows of history. They often experience prejudice and violence at the hands of the same oppressor. Anti-Semitic societies tend to be homophobic, and Jews and gays were murdered alongside each other in the Nazi concentration camps. Most importantly the gays and the Jews are both survivors. Despite societal intolerance, systematic governmental oppression, and genocide, both groups thrive today.

Ruth Bader Ginsburg recently said, “The true symbol of the United States is not the bald eagle. It is the pendulum. And when the pendulum swings too far in one direction it will go back.” On one hand, both communities have legal protections, governmental funding, and media visibility. On the other hand, we have a sharp rise of anti-Semitism since Trump’s election and a new Attorney General who voted against every major piece of LGBTQ legislation since serving in Congress. How can a gay or a Jewish person ever feel truly safe?

Therefore, in these moments of relative peace and acceptance, it is vital that the Jewish community and cisgender gay community stand by others who need help. To me, being gay means protecting anyone anywhere who is discriminated against for who they love or their gender identity. To me, being Jewish means taking a stand against any type of religious or racial discrimination. Since Trump took office, I have seen both of my communities step up in a very serious way.

I saw a massive Jewish presence at the Trump travel ban protests. At least five signs blared the Elie Wiesel quote, “No Human Being Is Illegal,” and kipot dotted the crowd. In Battery Park, hundreds of Jews chanted “Never again” as the Statue of Liberty stood behind them. The night Trump rescinded federal protection for transgender students, I posted on Instagram about a rally at Stonewall. Thirty friends met up with me beforehand so we could walk over together- all gay men. We carried signs that said, “Fuck with our sisters and you fuck with us.”

I love having two communities I can turn to in a crisis. My ancestors, my friends, and I have all been persecuted. Therefore we know to show up when others are persecuted. When I feel weak or broken I find strength in the challenges my ancestors overcame. I think to myself that if they can do it, so can I. Anybody who is gay or Jewish or black or Muslim or Mexican or an immigrant or part of any previously oppressed group can call on that same power. My intersectional identity allows me to draw from two incredible power sources. And I think that’s just the chicest thing ever. 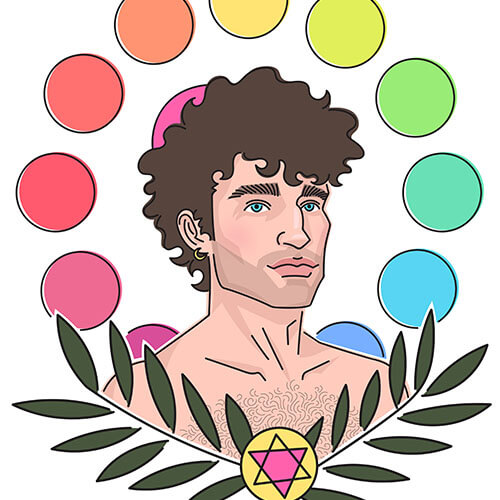