By now, you’ve probably read all the articles about Rebel Wilson singlehandedly torpedoing the debut of the trailer to her upcoming film Isn’t It Romantic. You probably know that she stuck her whole ass into her mouth. You probably also know that she went on a mass blocking spree against mostly Black creatives and critics. You probably also know that after watching her flop for at least four days, her PR team finally stepped in, helped her issue a half-assed apology and made her unceremoniously (and probably to her utter embarrassment) unblock said critics—particularly if they had a blue check mark next to their name.

You probably know all that. And that was all important as well as hilarious enough.

That said, unless you are fat like myself or your politics are extremely intersectional and include some much-needed self-awareness about how casually fatphobic you can be on an average day (you are, everyone is), you probably missed many of the fault lines that Wilson exposed in the body positive movement during that fateful weekend. To be clear, two weeks ago, Wilson not only showed her yansh to the world in the most completely avoidable way, but she also exposed levels of racism in the body positive movement that hadn’t been shown in such a public way in a little minute. I mean, granted, every time Jameela Jamil opens her mouth about being “body positive” and supportive of women (after spending several years tearing said women down) and parrots what fat and plus-sized Black women have [already] said, this kind of happens but Ms. Wilson took it into the stratosphere this time.

What do I mean by that? Well, let’s start with numero uno:

1. Her “benign comments” reminded many of us that racism in the body positive movement dictates that milestones for fat and plus-sized Black women exist in a “gray area” that doesn’t count towards the rest of the movement.

There’s irony in this point, mostly because it is Black women who came up with the body positive movement. But much like every movement that is kickstarted by a particularly marginalized group of people, it has been hijacked and watered down for mainstream consumption and to the point that White women like Wilson believe they can dictate our place in it.

But of course, history aside, her comments insisting that Mo’Nique and Queen Latifah’s films, overall body of work, and even physical bodies existed in a “gray area” and therefore should not count as groundbreaking (unlike her so-called romantic movie, which actually is a glorified spoof) were not surprising to me. Mainly because she unintentionally implied that she does not see herself in those women, she cannot relate to those women, and the representation that they embody is not something she can get down with. Anyone who has done extensive academic, as well as cinematic work in regards to representation, knows that this is just a thing for White people in general. They can relate to, say, an anthropomorphic hot dog, but God FORBID you attempt to sway them into empathizing with a Black person. Suddenly, it’s “unrealistic.” Too PC. Too much change and way too fast.

And the implications don’t stop there either. Wilson’s comments were also a callback to how White and out-of-touch fat representation is and why Queen Latifah and Mo’Nique (problematic as she is) matter to begin with. In both Latifah and Mo’Nique’s films where they exist as normal women living normal lives and falling in love, particularly Latifah’s long career with classic shows like Living Single, they never used their weight as a punching bag. They never engaged in the well-known disarming tactic of belittling themselves and their weight through comedy or body humor that seeks to degrade their fat bodies. Nope. They were regular ol’ women doing their thing and didn’t once pause and assume that they weren’t entitled to lively sex lives and attractive men (or people) of their choosing because they were fat.

This isn’t even the case for Wilson or recent and so-called “fat-affirming” media. That just so happens to match Wilson’s goalpost-moving definitions and happens to meet her extremely White standards. Wilson’s whole shtick is poking fun at her fatness before anyone else can (think Fat Amy in Pitch Perfect). Beating them to the punch. Her upcoming film even continues this trend by stealing the plot of I Feel Pretty and making it so that a fat woman literally has to hit her head and suffer from amnesia before she can believe that she is indeed attractive and worthy of [male] attention—meaning she leans all the way into that “disarming” bullshit.

Sierra Burgess Is A Big Loser (perhaps the most toxic piece of media pertaining to fatness that I consumed in the last decade) was rife with White privilege and tacitly implied that abominable behavior is expected and even excused when you are fat and unattractive (a horrendous message really). And even This Is Us (which is notable for its frank conversations about race* [*by White standards]) completely dodges every and any opportunity to portray Kate Pearson, a fat White woman, as a normal person who just so happens to be fat.

But yeah, Latifah and Mo’Nique are definitely the ones who should be put in a “gray area.”

It’s easy to dismiss her comments as simply “racist,” but it’s actually a combination of that, as well as a general lack of empathy with Black women. Which is also compounded by that inferiority-superiority complex, in regards to White women.

And it does not stop there. These comments also remind me of a different kind of racism. The tropey kind.

2.  Her comments inspired other asinine comments from plus-sized White women, most of which asserted that fat and plus-sized Black and Brown women did not face fatphobia in our communities and if we did, we were too strong or “confident” for it to ever affect us.

While Wilson’s comments erasing and other-ing the careers and bodies of Black women like Latifah and Mo’Nique were extremely offensive, she was not alone in making them. She was highly visible, but not alone.

Which is where dear Nicole Michalik enters the picture. Michalik was not a part of the initial shit-storm, but she was sure to jump in as the storm winded down, as seen below: 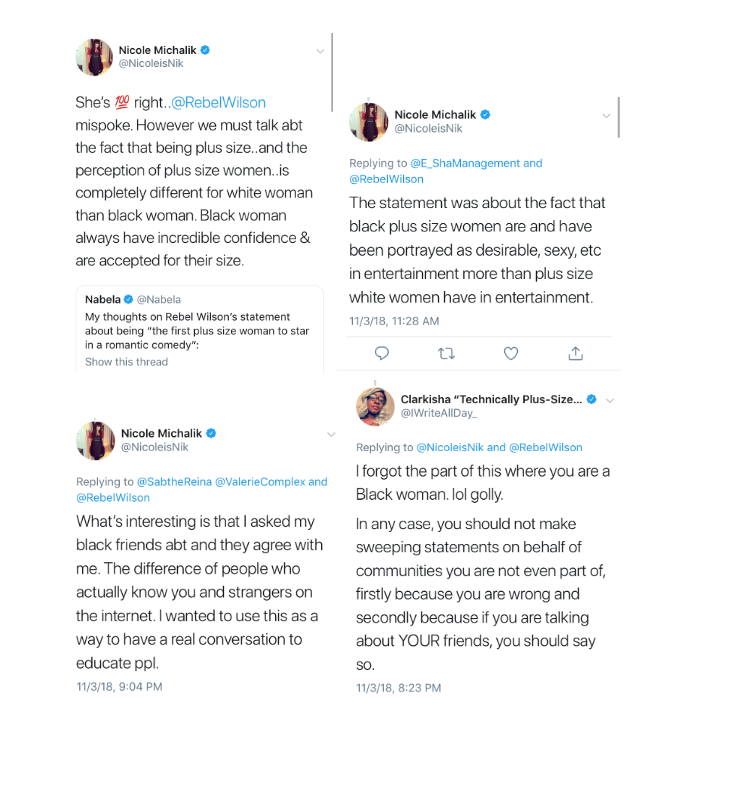 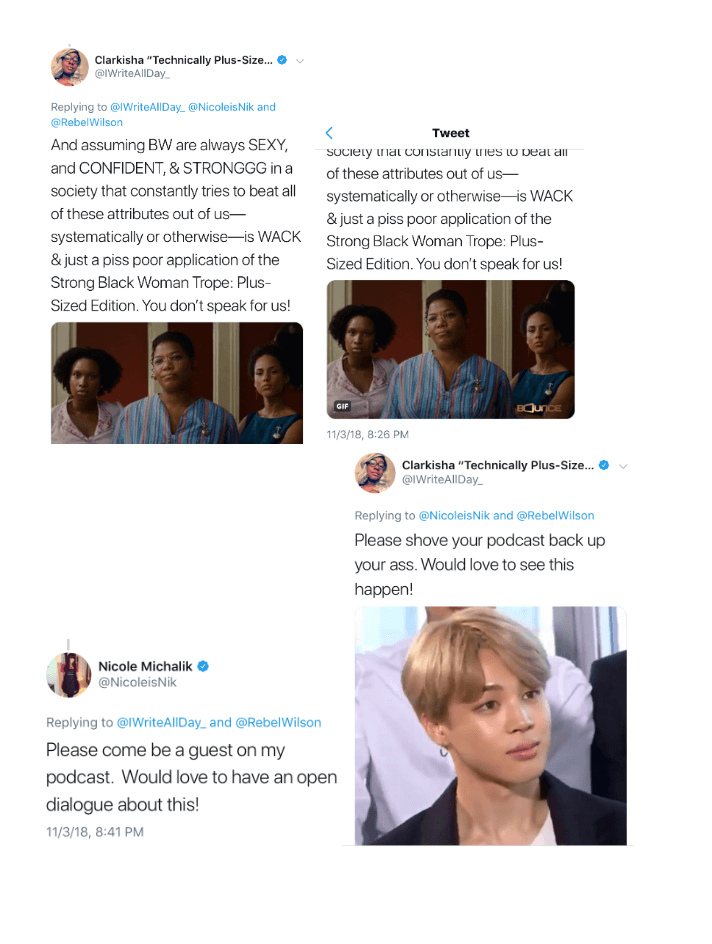 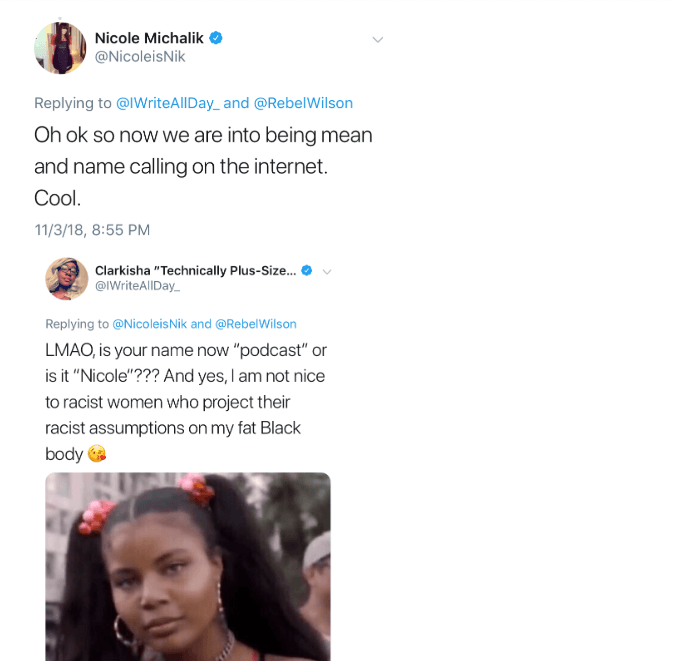 To restate all of the above for you, Michalik suggested that Black women do not face the same kind of fatphobia (if at all) that White women do in general. And on the rare occasion that we do in fact encounter the unicorn known as racialized fatphobia, our overwhelming strength and confidence are enough to make that shit bounce off of us like we are the collective human personification of Henry Cavill’s hairy chest in Man of Steel. And then had the Caucasity to invite me on her podcast like she could ever afford me. 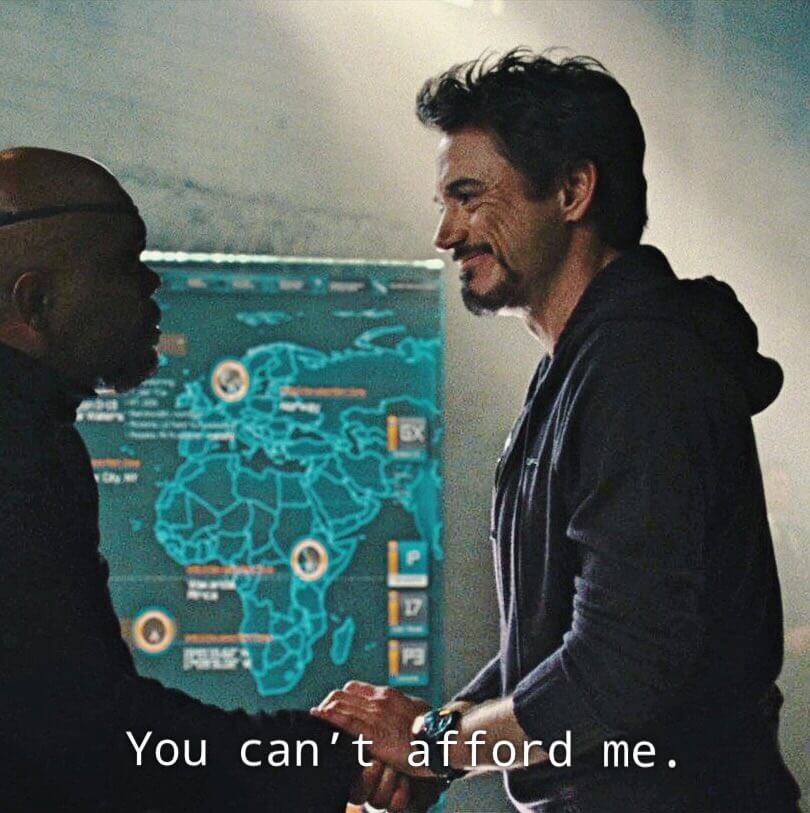 Contrary to popular belief, not much on the internet gets under my skin. But these comments did. For several reasons. A variety of reasons, actually. Michalik had me fucked up in an assortment of ways.

However, there were two big ones that stood above the rest. The first was the fact that she was invoking the age-old “strong Black woman” trope, but put a fat spin on it this time, which is doubly traumatic for those of us in fat and Black bodies. The second way is the fact that in an effort to center fat White women as the sole sufferers of fatphobia, she tells a blatant lie and erases the very real struggle of racialized fatphobia and how it complicates our existences under White supremacy.

The former is a trope Black women know very well. For it is the same reason doctors refuse to believe us when we say we are in pain (doubly so if we are fat). The same reason we die of easily curable diseases or childbirth at high rates. The same reason we die in “medical-related incidents” more often than most other marginalized groups. The same reason our domestic violence/intimate partner rates are so high and yet nothing is being done about it. This positive stereotype of the unending strength that Black women possess is an excuse to nullify our humanity and convince the world-at-large that there is nothing you could ever do to us that could really hurt us because, at the end of the day, we are “unhurtable.” This not only absolves society at large of any violence it carries out against us, but it is also detrimental to our well-being and makes it so that we are supposed to take disrespect, denigration, defamation, and above all, abuse with a smile. We are supposed to shoulder it with grace. Without a single drop of sweat to be seen or our edges out of place. And by invoking this same exact trope when speaking of fat and plus-sized Black women, Michalik implied that we are quadruply-stronger in comparison to our slimmer counterparts, implying that all our complaints at their best are nonsensical and exaggerated or at worst, are completely false.

This attitude is what makes the latter implication of White women being the sole sufferers of fatphobia so insidious, so toxic, but also immensely complicated. Because on one hand, I believe there is an overdue conversation to have—amongst White women—about how extremely toxic conversations pertaining to body image and fatness can get in White circles and how supremely destructive ideas on attractiveness and its ties to thinness are passed down by White matriarchs. There are definitely more strict and obsessive definitions of “fatness” in those same circles.

On the other hand, absolutely none of that invalidates the realities and lived experiences of plus-sized and fat Black women, even if people like Michalik do not personally see them as fat or plus-sized. And with those realities being the case, fat White women could never claim to be the sole group afflicted by fatphobia. Because the same malevolent and malignant forces White women have to deal with (the same ones that they are also responsible for perpetrating as the foot soldiers of White supremacy and for which societal beauty standards are modeled after) are the same forces we have to deal with as well. Only ours is complicated by a variety of other intersections (i.e race, gender, sexuality, disability, etc). And see, that might confuse some of you because attributes like curviness and thickness are purportedly praised in communities of color and simultaneously emulated by spicy White folx who are fetishists or who want to be “down” or who want all the benefits of being Black without actually being Black.

Still. Understand that none of these various complications are enough to invalidate our inclusion in a movement that we created. But this need to jump to invalidation and self-victimization does highlight the fact that fat White women like Wilson and Michalik, like any other marginalized group is that is White, feel resentment that they cannot access the full range of their privilege due to their fatness. And honestly? Rather than take that shit out on us, you could have a come-to-Jesus moment as a group and engage in some much-needed self-reflection.

Or you could not…and be dragged in kind.

The choice is yours.