A few years ago, I found a cute V-neck T at Cotton On that had “FEMME” written across the chest. I thought wearing it would be kind of tongue-in-cheek, as the brand surely didn’t intend for lesbians to be buying them as a declaration of identity. (I was all-too-aware that fast fashion companies were fans of French verbiage and that the translation of “femme” was “woman,” and ultimately, that’s what Cotton On was looking to express.) But once I posted a photo of myself in the shirt on Instagram, I had other femmes asking where to get one of their own, and I shared the wealth. Sure enough, one of them popped up in her own pic soon after.

As a femme lesbian, I’m used to having to putting something on if I want to be read as queer. I own a sweatshirt that professes “Gay Power”; a pink triangle necklace; a ring in the shape of a mythological goddess’s clitoris that isn’t as obvious but that I love to explain to any who will listen. Outside of that Cotton On T, I purchase these things from lesbian-feminist creators at shops like Otherwild or from individuals on Etsy. A fellow femme friend recently purchased a “Femme Ain’t Frail” T from Feminist Apparel, an an independent clothing company who profit-shares with the feminist-identified artists who submit and sell their work through the site, and I started to notice that more and more queer-specific slogans were making their way onto trendy Ts. (The most famous, of course, is “The Future is Female,” but no one really looks into the lesbian herstory of this specific look; just that it expresses woman power and, apparently, has no real copyright so copycats can do whatever they want with the phrase.)

So this week, when a T-shirt popped up at Topshop reading “Femme Forever,” it wasn’t super surprising. We’re all expected to be Francofiles (guilty!) and with the kinds of things that end up on such shirts, it was only a matter of time that “WOMAN” was one of them. However, “femme” means something more to us who cling to it as an identity, and who feel ownership over it as such. And it wasn’t just TopshopForever 21 and H also have “FEMME” on sale. Last night while Christmas shopping, I spotted “La Femme” on an overpriced Anthropologie sweatshirt. 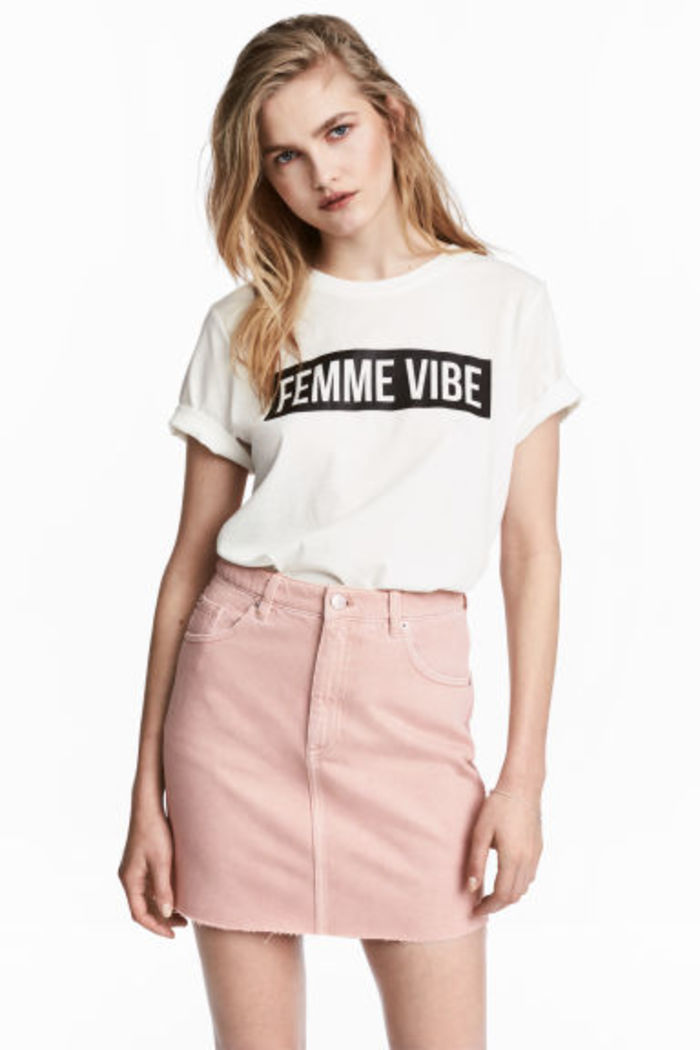 Fun fact: “femme” is in Miriam Webster as “a lesbian who is notably or stereotypically feminine in appearance and manner,” which means that, in America, the assumed pervasive meaning of such a word would be as listed in our dictionary. So, are these mass-market stores effectively selling our identity? And who is buying it?

Here’s the thing: I know many queer women who shop in both gendered sections of Topshop and H stores because they’re generally LGBTQ-friendly and are not egregiously priced. They’re on trend and mildly accessible, especially if you live in a larger city, where queers tend to migrate whenever and however they can. So is it possible the stores wanted to offer something they thought we’d want to wear, or were they blissfully unaware that it was something tied to our community in the first place? OR did they know and not care because they’re hoping women of all identities would want to wear a T that says “Femme Vibe,” thus further confusing all of us as to who is remotely homosexual in today’s sexually fluid age.

One of the issues at hand is that straight women have been co-opting “femme” for their own purposes and, just like their using of the word “girlfriend” to mean a platonic gal pal, it’s frustrating for lesbians like me who are using the lingo we’ve long-held on as our own. When straight girls use the word “femme,” they generally intend it as a shortened version of “feminine,” like when Zooey Deschanel once told Cosmopolitan, “It’s a shame to reduce smart, talented women to clothes models. But you can be a feminist and femme. I don’t see how those things contradict each other.”

First, Zooey, they don’tfemme feminist right here. But what I believe she’s saying is that she believes she can dress feminine and also be a feministthe two aren’t mutually exclusive. But getting into the semantics of who owns what word and its meaning can be a daunting debate on linguistics, and what it really comes down to is that being femme doesn’t just mean feminine. It means existing as a queer persona queer womanwho is not adhering to societal ideas of what a woman should look or dress like, but instead reclaims femininity through a sense of style and fashion that might align itself more with conventional ideas of womanhood than, say, what a more masculine-of-center person might wear.

I feel most comfortable, most sexy, most me when I’m wearing something femmeand that could be a ball gown with a pair of Loubs or my Stan Smiths with some jean shorts and a tank top. But whatever I’m wearing is queer as fuck, because it’s an extension and expression of who I am. If the outside world assumes that I’m heterosexual because I “look” straight, that’s their misconception, and I love proving people wrongmostly because it just comes with the territory. 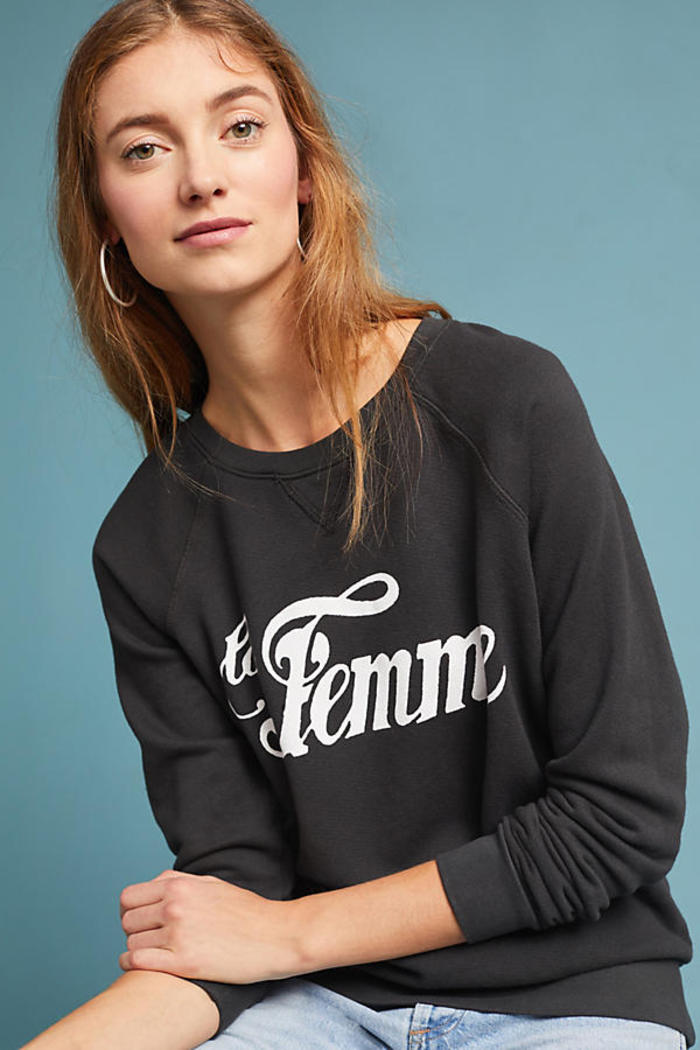 It can get tiring, though, educating people that my long hair and penchant for black dresses with booties doesn’t mean I’m looking to meet a man, so the desire to profess my queerness through a piece of super-queer clothing can be strong at times. But more often than not, I’m buying these items because they are made for us, by us, which is to say, not from Forever 21. Even that Cotton On T only made a few rounds of wear before it got buried inside of my dresser and, eventually, discarded after my identity became on trend yet again. (Lesbianism is SO CHIC every few years or so.)

But do I begrudge another who might see the familiar phrase while shopping and decide she needs it for the next time she’s going into the patriarchal society we live in and hopes it could fend off some feral menfolk? Nah. Partly because that would make me a hypocrite, but mostly because I don’t know that it will be that successful. Once a straight woman wanders into one of these shops and Googles “femme” to see what she’s going to be boasting boob-length, she might just put it back on the rack. Or maybe I’m giving her too much credit. Maybe she even likes that mystique.

In a country populated by heteronormativity, perhaps these “femme” Ts can give us a new talking point when we see them out in the world. Should you see one on an unsuspecting trendy fashionista, feel free to ask her “What’s your favorite Tegan and Sara song?” and then quiz her on some herstory. I grant you permission to pass on your femme knowledge and know-how and to school her on why the word is so important to us who use it on our daily lives; who find it inherent and not something we put on because we simply feel like it; because we think it’s cute or funny or temporarily en vogue.

Whatever you do, please don’t ask her to remove her shirt in public.