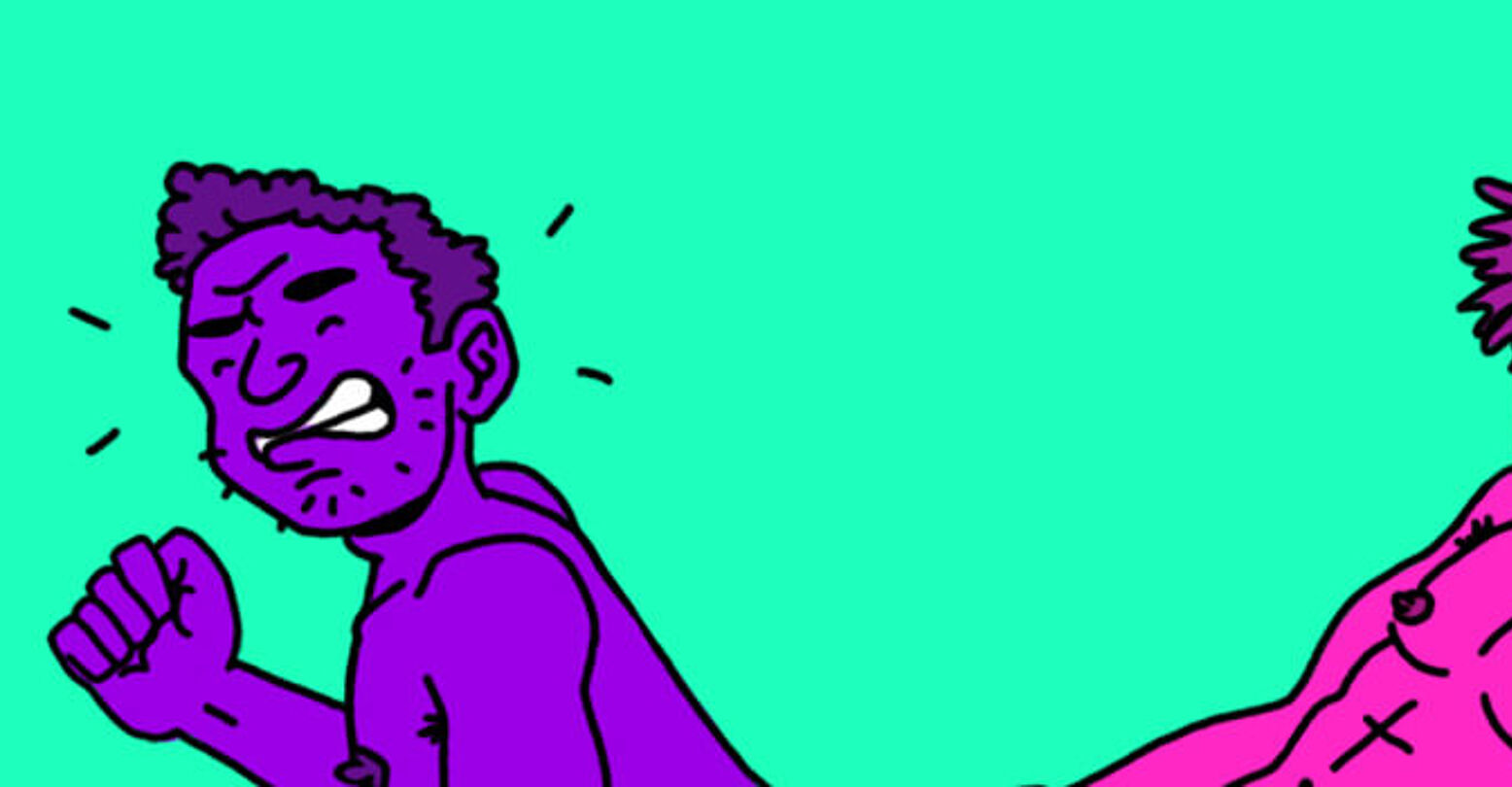 So, it’s happened. You’ve shit on a dick. First, breathe, and remember that you are a beautiful, wonderful flower of the universe. You deserve the best: Girthy dicks. Excellent tanktops. Open bars. Now, with that in mind, let’s talk about the dick you just shit on. Some people don’t care about this. So, check in with your partner, and if he’s good and you’re good, then it’s possible to just say nothing and burn these sheets after he leaves.

Second, remember that this is a perfectly normal reaction to having something inserted in your anus. Internal medicine specialist, Dr. Butt, says, “Are you fucking kidding me? Of course it’s normal to shit when someone puts something in your ass.” Now, with this in mind, let’s move on to practical steps. Step one, I want you to carefully dismount and assess the damage. Are we talking “banana dipped in a couple of walnuts” here, or is that condom now a pinstriped suit? If it’s just a few stray legumes, then it might be possible to confidently wipe and keep going. If not, excuse yourself, and offer a towel to help your partner clean up if needed.

It is of particular importance that you be careful once you’re in the bathroom. Mishandling fecal matter can result in the transmission of norovirus, shigella, and even the transmission of cholera if you happen to be on the Oregon Trail. So, be careful and be sure to wash your hands. This is a time to be both polite and thorough. Once the clean up is concluded, this may be the end of your encounter. Learning what someone had for dinner without them having to tell you can be a turn off, so perhaps it’s time to pack it in, offer a handy and a cool beverage and begin to emotionally prepare to say ‘Nice to meet you” the next time you see this man.

So, it’s happened. He shit on your dick. The first thing I want you to be is both gracious and grateful. Your partner, in his infinite kindness and generosity, allowed you to put your dick in his butthole. He may have eaten nothing but ice cubes all day. This is not a time for shame.

Now, it’s time to slowly and carefully pull out. Slowly and carefully, because you don’t know what you’ve dislodged. There could be more there there. Move deliberately but with caution, and you’re much less likely to find out. If you’re using condoms, thank yourself, because as the doctors say – PrEP doesn’t cover everything. Once you’ve exited, politely excuse yourself to the bathroom to carefully clean up.

While the water is warming up, ask yourself – did I miss something here? When one wants to top, sometimes we can be … pushy. Did he warn you? Did he tacitly warn you? Did he say “I had a bunch of tacos earlier, but if you want to come over and watch The Crown, that’s cool?” We have to listen to our partners, and it’s possible that in this case, you missed the sign.

But even if he was Very Well Prepared, this is just part of playing in the body’s compost bin. Dry off, and if the night is over, this may be time to offer a handy and order your Lyft.

So much of the awkwardness of sex can be avoided by conversations that we’re often too scared to have. Sex is intimate, and to make it good requires a combination of self-knowledge, communication and empathy that can be hard to come across. But sometimes good sex means asking questions – if it’s important to you, it’s okay to ask the man who you’re going to top if he douched. It’s also okay to tell someone who wants to top you that doing so may not be a great idea right now. That way, everyone gets to make informed decisions, even if it’s one that surprises you. Grown up behavior requires grown up conversations, and if that feels awkward, it’s no more awkward than putting your dick in someone’s ass.

So, have at it, my friends. Fuck away, and pro-tip: no matter whether you’re top, bottom, vers or side, keep some baby wipes in the bathroom for when things get out of hand.