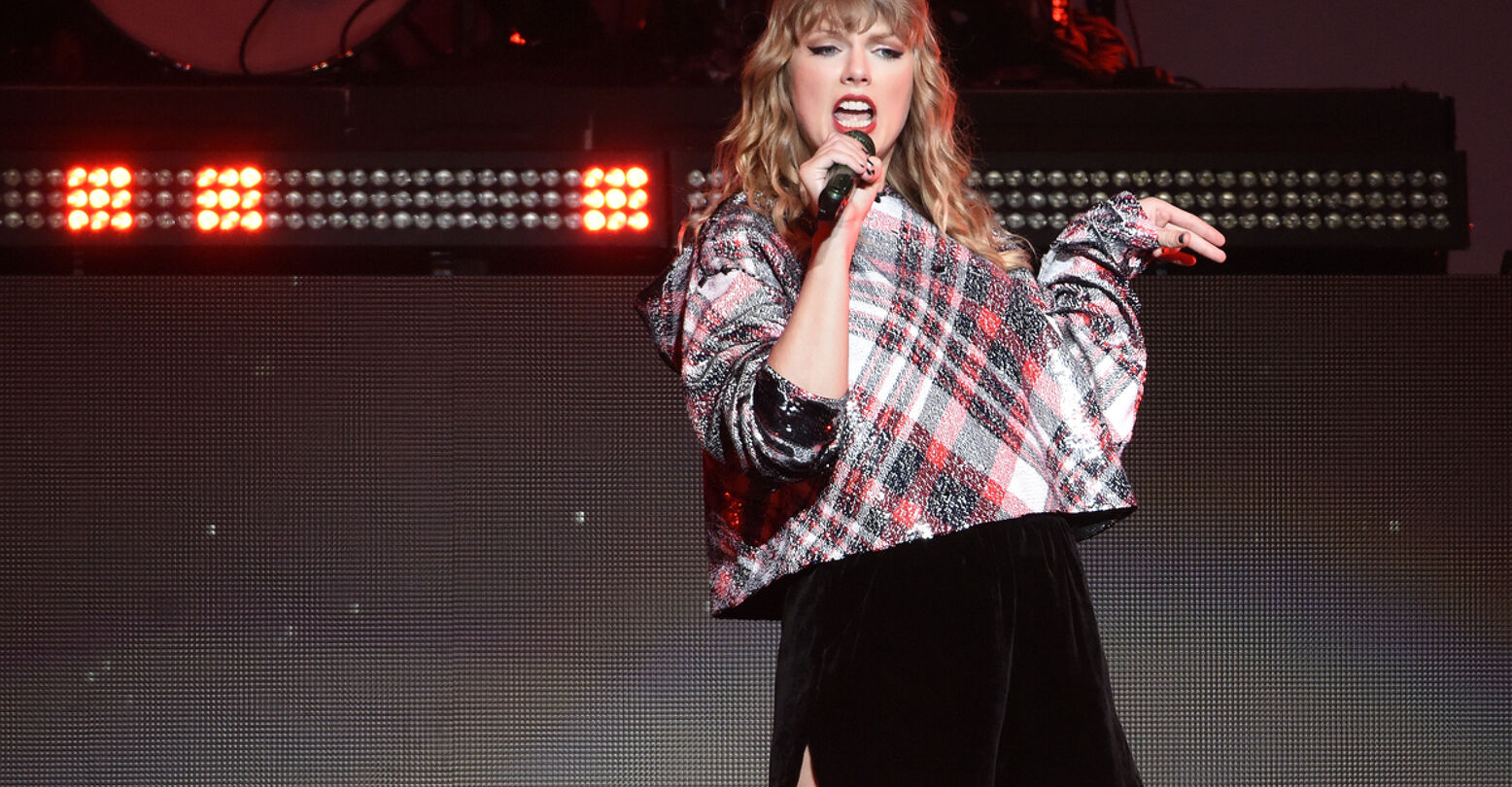 Taylor Swift wants you to know that she’s the victim here, guys.

Just hours after ending her nothingburger of a feud with fellow pop star Katy Perry, the one-time country singer addressed her ongoing strife with the Kardashian West clan. In the most recent volume of what feels like a generations-spanning Russian novel, Kim Kardashian leaked audio in 2016 which appears to show that Swift gave her husband, Kanye West, permission to rap about her on the track “Famous.” The line in question references their infamous run-in at the 2009 VMAs.

“I feel like me and Taylor might still have sex,” West says. “Why? I made that bitch famous.”

Swift has spent the past two years denying the accusationalleging that while she may have known about the song, she never approved the word “bitch.” It’s a spurious claim, but the 28-year-old upped the ante in revisionist thinking this week to nuclear levels. While in concert on her Reputation tour, the singer referred to their ongoing feud as “bullying” on the part of Kardashian and her never-ending flowchart of relatives.

“A couple of years ago, someone called me a snake on social media and it caught on,” Swift told an audience in Glendale, Arizona. “And then a lot of people called me a lot of names on social media. And I went through some really low times for a while because of it. I went through some times when I didn’t know if I was gonna get to do this anymore. I wanted to send a message to you guys that if someone uses name calling to bully you on social media and even if a lot of people jump on board with it, that doesn’t have to defeat you. It can strengthen you instead.”

Let’s get one thing out of the way right now: what happened to Swift in July 2016 is in no way bullying. Swift spent the better part of a decade banking off the image of her as an innocent torn asunder by Kanye’s anticsshe the lily-white heroine; he the hulking black menace.

For a while, this characterization was profitable for both parties. West’s best album, My Beautiful Dark Twisted Fantasy, allowed him to lean in to his heel persona. On “Monster,” he sums up America’s 2009 hot-take on him: “Everybody knows I’m a motherfucking monster.” “Runaway” asks the listener to raise a toast for the “douchebags,” “assholes,” and “scumbags,” and the suggestion he’s addressing VMA-gate only gets more explicit from there: “I did it, all right, all right, I admit it.”

But while temporarily lucrative, the narrative wasn’t entirely true. It also played on centuries of racial dynamics depicting black men as a threat to the purity of white women. By releasing the audio on Snapchat, it called attention to the fictiveness of their assigned rolesas well as the historical context for why the public is so willing to buy into those characterizations.

To reduce what actually became a nuanced conversation about white fragility and the exploitation of black masculinity to “bullying” is an absurd attempt to pivot from Swift’s very bad 2016, and 2017, and 2018.

In the span of two naked firemen calendar cycles, the pop star went from virtually untouchable to radioactive. Around the time of 1989, it seemed Swiftwho had recently come out as a feministcould do no wrong. She was dancing on stage with everyone from Lisa Kudrow and Julia Roberts to St. Vincent and Alanis Morissette. The power move was designed to assert her own impenetrable A-list status: Swift is so popular that she can get anyone to hang out with her, even the entire Algonquin Round Table or former First Lady Eleanor Roosevelt.

But Reputation finds her in a more precarious position following a botched album rollout timed to a number of ill-advised PR gaffes. Instead of denouncing white supremacy, Swift attempted to sue bloggers who asked the singer to distance herself from her fanbase of literal Nazis. It didn’t help that the former Nashville queen wouldn’t say who she voted for in the 2016 election (while her best frenemy, Ms. Perry, was stumping for Hillary). It only ignited nasty rumors she voted for Trump.

In an ironic instance of parallelism, Swift attempted to solve her PR crisis by having what Kanye was having: leaning into the antiheroine qualities behind her calculatedly wholesome persona. Her sixth EP portrays her as both the siren and the shipwreck. Never one for subtlety, she sings on the transparently titled “I Did Something Bad”: “They say I did something bad/But why’s it feel so good?/Most fun I ever had.”

But as her meth-hocking forefather Walter White once warned: “Never go half measures.” Swift’s heart isn’t in playing a villain because she doesn’t seem to truly think she did anything wrong. This message is casually beaten to death on Reputation. “All the liars are calling me one,” Swift sings on “Call It What You Want.” The lead single, “Look What You Made Me Do,” reinforces her not guilty plea: “I don’t like your perfect crime/How you laugh when you lie.”

Even on “I Did Something Bad,” Swift wants to have to both ways: confessing and placing blame. “They’re burning all the witches, even if you aren’t one,” she claims. “They got their pitchforks and proof/Their receipts and reasons.”

The confusing metanarrative of Reputation resulted in what was her least commercially or critically successful work to date (although “Getaway Car” is a too-rare standout). Thus, it makes a certain amount of sense that Swift, thrust into the maelstrom of an identity crisis, would return to her most well-worn of tropesthe victim. You know her: She wears T-shirts, she’s too young to be messed with, and she knew you were trouble.

But despite the brand-friendliness of claiming Ms. Kardashian is victimizing her, there’s something particularly pernicious about using bullying to further a narrative that was never true to begin with.

Swift released the song “Mean” in March 2011, just months after Rutgers student Tyler Clementi took his own life after being outed by his roommate. The singer dedicated that trackwhich was actually written in response to a harsh music criticto victims of bullying, while talking openly about her experiences of being ostracized by her classmates in school. Swift told People magazine about being “dumped by this group of popular girls” as a preteen for not being “cool or pretty enough.”

As someone who allegedly knows how difficult it is to actually be bullied, Swift should know better than to compare the very real harassment and violence young people face every day to a feud between two wealthy white women.

Queer and trans youth who are misgendered in their classrooms, called anti-LGBTQ epithets in the halls, and forced to use bathrooms that don’t align with their gender identity don’t have the ability to release chart-topping songs about it. In fact, it can be difficult for these students to find supportive teachers, counselors, or parents who will listen to them at all. Fifty-six percent of LGBTQ youth claim to have heard homophobic remarks from faculty and staff at their schools. Ninety-five percent overheard similar statements from other students.

Swift has had a tough few years, undoubtedly so. It can be challenging for public figures to learn in real time and overcome their missteps while navigating the stresses of keeping a multimillion-dollar empire afloat. It’s even harder for female celebrities, who are held to a standard of ethics and responsibility our culture has only recently begun to ask men to live up to. (Note: We’re so not there yet.)

But if Swift has the urge to continue exploiting the very real epidemic of bullying to buy herself a few sympathy points, I ask her please: exclude us all from this narrative, one we never asked to be part of.