Still, of all the things this show and its cast members could have clung to for the sake of consistency, maligning members of the community it largely steals from should have been its lowest priority.

On last Sunday’s episode, viewers were treated to the sight of gay men once again being accessorized on the show along with a casual dose of transphobia.

First, there was NeNe Leakes’ “Gurls & Gays All White Affair.” As Derek J noted to Cynthia Bailey, something was off about the theme. This show has a habit of using gay men as props, and while I know Black folks typically love an all-white party, considering Leakes is the same person who harped on her love of gays once upon a time, then denigrated a gay Black man on the show as a “queen” and used “girl” as a pejorative descriptor, this party doesn’t suggest that she’s learned anything from her past mistakes. Nonetheless, she’s already announced a second annual party in 2018 and toasted “the haters” for garnering the event sponsorship.

I still find the title cringeworthy, but if Baloo can keep her “queen” related insults under her wig, I suppose we can leave her scalp alone. Having said that, if she tries us again, I hope she spills red wine and Hennessy on her white pants, and may her top be stained with hot sauce and catfish grease and let any dry cleaner she take it set the shit on fire right in front of her. Bloop.

As for Kenya Moore, may this fake ass Valerie Cherish whose entire existence on this has reminded me of a Build-A-Bear store, lying ass people on social media, and y’all’s president’s fabrication-filled Twitter timeline twirl right on into the abyss. 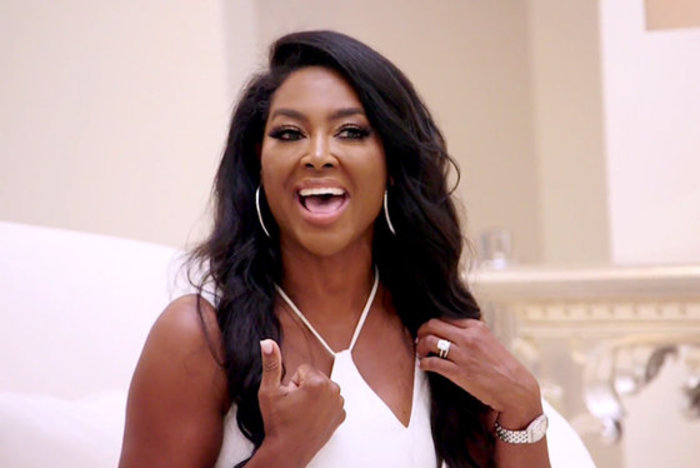 Get it? Kim Zolciak used to have a penis and, apparently, that penis has a hard-on for Kenya Moore because Kim decided to troll Kenya about her secret marriage the same way Kenya came for her at Chateau Shereé awhile back. But, like, Kim got it cut off because she’s not really a cis-woman and that’s purportedly some kind of an insult. That’s so funny I could tell Kenya Moore to shut her simple, transphobic ass the fuck up! Insert laugh track here.

I couldn’t see Kenya Moore’s tweets because I recently learned that she blocked me? Why? The hell if I know. She strikes me as the kind of thirsty celebrity that searches her name so maybe she saw that I mocked her fake relationship with Walter. Or pointed out that she’s been copying previous cast members’ storylines to get airtime. Or laughed at the idea that anyone besides Mr. Magoo six months after he died would mistake her for Beyoncé. Or that she had some nerve trying to come for Kim Fields’ career as if being on the set of Martin for 15 minutes 20 years ago gives her the right to insult a legend. I don’t know and I don’t really give a damn either way.

However, I did learn that she addressed the criticism of her remarks on Twitter. She quoted someone who wrote this and added “Reaching”: “Nothing @KenyaMoore said was transphobic. It was just a major read. Slowly rewind the episode and listen what she said. #StayMad #RHOA”

You can rewind it, chop and screw it, remix it, and play it another a Metro Boomin production for all I care and most of us with sense will still know what Kenya said was indeed transphobic. Kenya’s intent was clear. It was just as clear a few seasons back when she insinuated that Kim Fields’ husband was gay. Like many of the women on this show, they want to flank themselves around queer people, use them for their wit, culture, and labor but the second someone pisses them off, they use their identities as a means to insult.

That is blatant disrespect, a lack of regard for our humanity, and most of all, intellectually lazy. Kenya Moore has two options: She can apologize or she can continue being an insensitive, hypocritical moron whose little quip adds on to pathetic lingering prejudices about trans women that we need to collectively rid ourselves of. If it helps her reach the latter, more humane option, she can even borrow someone else’s apology lines so long as she remains sincere with it.