Jack White kicked off his Canadian tour this weekend with a show in Edmonton where two women — a couple — reported being kicked out of the venue for kissing. One of the women, Allyson MacIvor, took to Facebook to write about the disturbing incident, detailing that an employee at the concert venue, Rogers Place, allegedly forcefully placed her hand between them and deemed the kiss “inappropriate sexual behavior.”

“That’s not allowed here,” the usher said as she wagged her finger in MacIvor’s face. According to CBC, MacIvor was watching White perform “Seven Nation Army” when she turned to her girlfriend for a kiss, and that’s when the usher confronted them.

“I embraced my girlfriend, and some staff member came in between us, and she said, ‘This is not allowed here,'” MacIvor said. “It was very violating and invasive. It’s not something I’d ever imagine experiencing, honestly.” The usher brought the two women to the venue’s manager, where they subsequently filed an incident report.

The most heartbreaking part of the story: Allyson’s Facebook post was the first time she announced publicly that she was gay — and under such terrible circumstances.

As a gay woman, this story was hard to swallow, because I — and probably most queer people — have been made to feel this way with a partner in public, even if we weren’t forced out of the venue. I’ve received all sorts of harassment for showing any range of PDA with another woman in public. I’ve held hands with a woman on the street and been questioned by a male pedestrian if we were “just friends” or “together,” which led to further pointed questioning, and both of us feeling extremely unsafe. I’ve kissed a girl in a gay bar, only to open my eyes and see that a straight man, by himself, had been watching us the entire time — and asked us to keep going. I’ve held hands with a girl in a club and been followed out and down the street by a suspicious-looking man. I’ve kissed an ex-girlfriend at a concert and drawn bewildered stares and gapes from other concertgoers.

Each time I choose to engage in any form of PDA, I become hyper-aware of my surroundings, fearful of what might come next, to the point that it becomes stressful for me, and not worth it.

Each experience is disheartening and so discouraging — it makes me feel like I can’t live my life like a “normal” straight couple can. Because the reality is: I can’t. I live in Los Angeles, one of the most progressive cities in the nation, and each of the aforementioned incidents happened here. I can’t even imagine what it’s like for LGBTQ couples in more conservative areas if I, an LA resident, feel like I’m looking over my shoulder everywhere I go — and being made to feel shame for such minuscule and normal displays of affection. 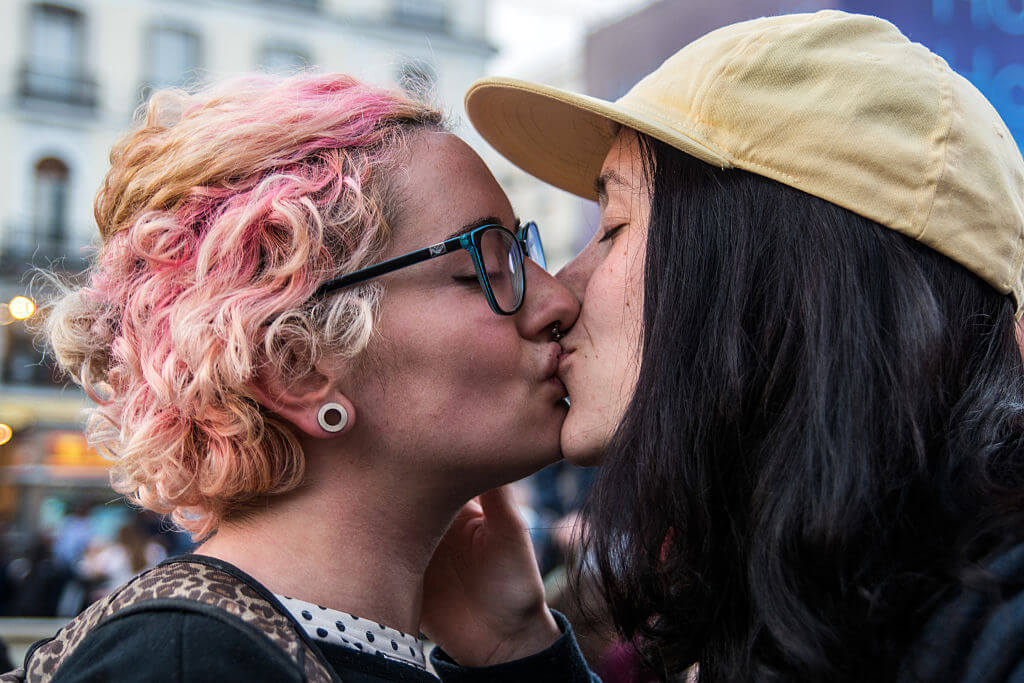 Many LGBTQ people still feel unsafe expressing any type of PDA in public with a partner, and that’s a totally fair assessment — even if you’re OK with drawing unfair stares and attention from onlookers, you have to worry about your actual safety after doing something as mild as holding hands with a partner—something straight couples never lose sleep over. Unfortunately, we are still unsafe in most areas. We never know how a person or a group of people is going to react to a hand-hold or a peck on the lips — will they shout at us? Will they become violent? Will we bleed?

The incident at the Jack White concert is the stark reality of the world LGBTQ people still live in. And it’s commonplace — in June, a lesbian couple reported being kicked out of an Uber for exchanging a peck on the lips. Queer people are not only common targets of public harassment and denigration but also of violent crimes. According to a report by the National Coalition of Anti-Violence Programs (NCAVP), 2017 was the deadliest year ever for LGBTQ people, with an 86 percent spike in homicides as a result of anti-LGBTQ hate crimes. Of the 36 hate crimes that were counted, 75 percent of those lost were people of color, and an astounding 16 of them were transgender women of color. That should be a hard pill to swallow, not just for LGBTQ people, but for allies, friends, and family members too.

When I first came out and was dating my first girlfriend, there was one night when I grabbed her hand on the street while walking home from a bar. She quickly removed her hand from my grip, and upon watching my face fall, said she “felt weird” about PDA. At first, I was hurt by it. But after years of being out and gay, and walking through numerous bars, clubs, street corners, concert venues, convenience stores, and restaurants with various significant others, I’ve learned to forgive her for that moment. And I don’t just forgive her, I understand where she was coming from. I don’t think I’ve been with one other woman since then who has felt totally comfortable holding hands or kissing in public — and I don’t either. I’m scared of what harassment or retaliations we’ll receive, or even what looks of awe or surprise we might draw — and I have the numbers and the reported horror stories, like Allyson MacIvor’s, to justify such fears.

Of the Rogers Palace incident, Jack White said, “At the next show in Calgary I dedicated the song ‘Love Interruption’ to the two women and encouraged everyone in the crowd to kiss their loved ones.” He added, “Let’s promote love and acceptance wherever and whenever we can.”

Jill Gutowitz is a writer and humorist currently living in LA, originally from The Void.