Cristy C. Road’s artwork is a visual soundtrack for the revolution, illustrating uprisings and protests, centering people of color, queers, messy punks, people with disabilities, every type of body, all of them roiling with passion and rage, big emotions and beauty. Her work is iconic, and often her gaze is turned on herself, as in her illustrated memoirs Indestructible: Growing Up Queer, Cuban and Punk in Miami; Bad Habits: A Love Story, and Spit and Passion. 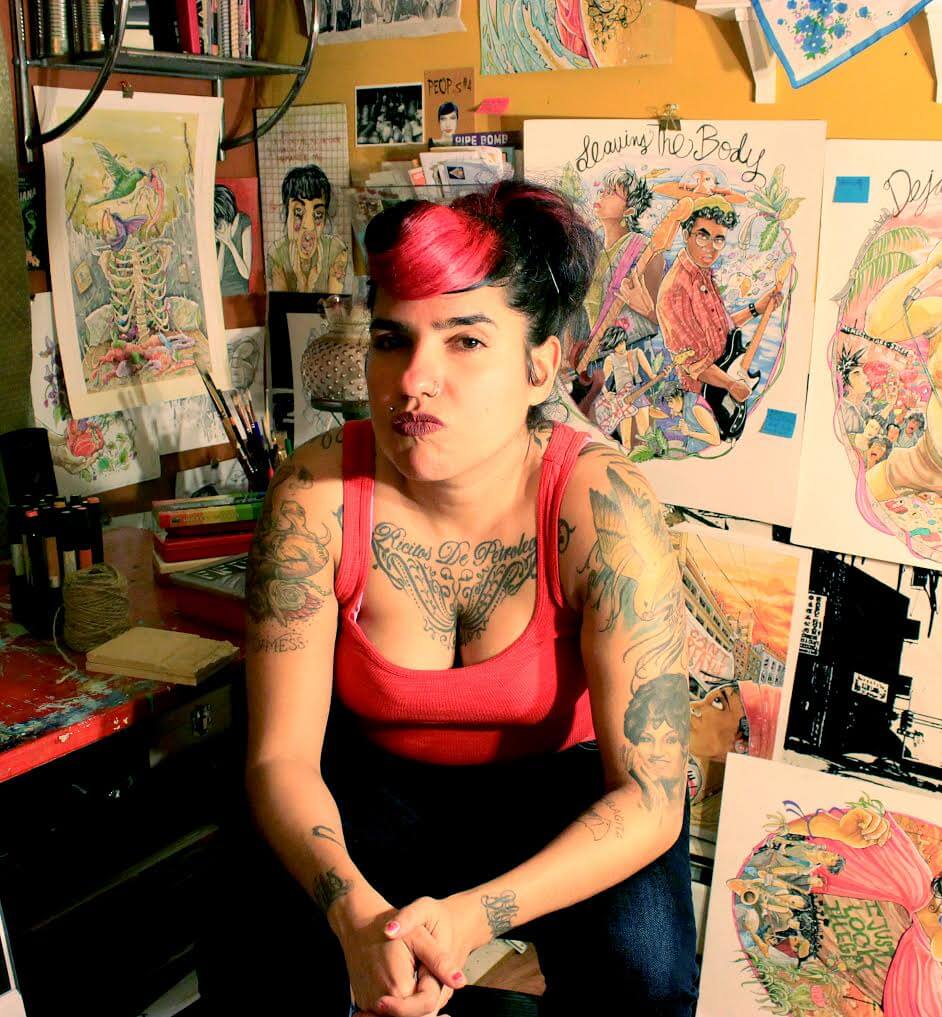 Last year, Road produced a true masterpiece: The Next World Tarot, a groundbreaking tarot deck featuring the individuals who have long populated Road’s work: femmes and fags, old and young, fat girls and genderqueer punks, all of them rebuilding our world in the wake of an apocalypse. It is gorgeous and gritty and goes a long way to correct the skinny, white heterosexual bias of the traditional tarot. It’s an important work. Long obsessed with her visual art, today Road is prioritizing her band, Choked Up, while waiting for the deck to go into its next printing.

I loved spending time with her on the many Sister Spit tours we shared and was psyched she took the time to answer my same 15 questions!

Oh damn, there are so many that are kind of expected — random bullshit, the government, etc. But I want to reminisce about that time we were on Sister Spit tour and we got lost in a Swedish forest in the dead of night. Our driver wasn’t using GPS or familiar with the territory, so we ended up in a dark foggy forest where our car was the only source of light. That was cool except no trolls. I always retell that story!

What is in your bag right now?

Not very exciting today, but a great look into my soul: My computer, a pack of my band’s stickers just in case I see something to put them on, two bandanas for crying/boogers, a wallet filled with pennies, guitar picks, bobby pins, my headphones, my RFID blocking wallet, my weed bag which just happens to be a tiny leopard print clutch thank you very much. 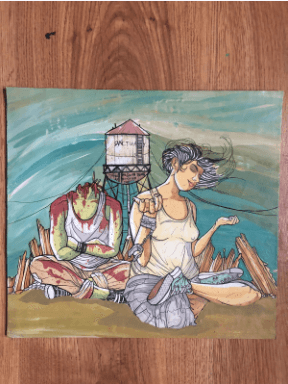 Holy crap, you’re a magical witch! It’s a picture of this unfinished painting from 2009.  It’s about healing from trauma. I really want to finish it! I’ve been thinking of posting this version to social media, but then that would involve this whole essay about healing and punk and the Me Too movement and the ’90s and accountability movements in punk and —  I don’t know right now, I need to think.

I’m a GEMINI. I love caps lock, talking, tangents, writing memoirs, being very organized but with LOTS of color coding + aesthetics before function [or grammatical rules]. I love all animals and talking and singing to them. The most grounding things are potlucks, family BBQ’s and performing to a crowd. I’m a visual artist because that is a gift I can wield into important work, but I’m a musician because that is what I LOVE to do. I’ve been writing songs since I was a kid, and punk songs since 1995.

My journey to now, where I’m prioritizing music, is where the Gemini stops. I’m a Cancer rising and moon. I’ll never forget the time you didn’t believe I was a Cancer rising because of my Aerosmith performance at karaoke in maybe Germany (I was drunk), so you double checked, but I mistakenly gave you the wrong birth time, and I spent almost 10 years thinking I was a GEMINI RISING, and therefore uncharacteristically anti-social and protective, and also depressed but in a creative way (like a Jawbreaker song). I validated I actually was a Cancer rising a few months ago — thanks, Mom. It’s what most people are going to get until we hang out at a BBQ and someone brings up flan or pop-punk and I can’t stop yelling for some reason. I’m also a Gemini Mercury. I’m just Greta Gremlin except constantly needing to feel at home.

Book: Love Is In the Earth: A Kaleidoscope of Crystals; Song: Estoy Aqui by Shakira; Movie: Hereditary.

Chorizo with cornmeal pudding and roasted potatoes, and I had put out fruit so it’s healthy but I forgot to eat the fruit….

Space / the moon, but in a safe and comfortable way.

I guess I’ll talk about my favorite songwriter — Billie Joe Armstrong from Green Day — the first songwriter I ever actually related to as opposed to just enjoy their music. The first time I met Billie Joe Armstrong it was 2000 and I was “Press” at the Warped Tour (for my zine the green’zine,  which started as a Green Day fanzine four years earlier, but at this point included interviews and reviews of other bands + feelings). I met him watching this band, One Man Army, from the side of the stage, and I said hi — he said it was so cool to finally meet me — definitely felt the magic and died inside (obviously, I haven’t forgotten) but I don’t remember being very nice — apparently cause I’m a Cancer rising, that’s the place of power where I go to when I am nervous? I remember complaining about my camera being broken, I also remember being sad and not very upbeat.

I spent most of the day eating BBQ backstage, hooking up with a cute roadie who I never talked to again, and just straight up being sad doing sad author things. My band and my boyfriend had just broken up with me — but at least I had life and art and punk and a prospective future of maybe more feminist narratives from my actual experience that I only hear in a few songs by mostly men? I just wanted Green Day to go on so I could LIVE again. I saw Billie again before Green Day’s set and he got me and all my friends in, to watch from the stage! Obviously, the Green Day stage was restricted….. But Billie dedicated “Who Wrote Holden Caulfield” to me. They also played “Christie Road” in the same set. I don’t know if that was a mistake but I guess I don’t want to know because “Who Wrote Holden Caulfield” is about anxiety and coming of age…… That was WILD and magical– I definitely died and did not care one bit that my tape recorder had JUST been smashed by a stagehand! Anyway, he was super supportive of my work back in the ’90s when I started the green’zine, and still is of everything I’ve done since– so that’s an inspirational tale for everyone. If you admire or relate to any cultural creator, write a zine about them, and hopefully, they aren’t assholes!

I’m always coughing stuff up, burping a whole bunch, but trying really hard to stay human and get work done, except every now and then I just hack something. If I can’t stay human, I’m not very exciting — just grumpy yet self-sufficient to the point where you can’t tell if I’m sick until I burp or hack something.

I’m obsessed with the secret process of releasing The Next World Tarot’s second pressing, and also my band. I love working on that project with a publisher who works primarily with comics, and also through this process that is way more internal than self-publishing. I’m excited about my band in a new way—I guess playing music has always been this need and obsession, I’ve always been obsessed with my bands, but I think this one feels different because I can see myself before I see anyone else’s take on me for the first time ever. I’ve been integrating readings from the deck with shows and also seeing fans of my art being present at shows; but in a way I’ve never seen before, because these fans aren’t always into “punk,” but believe in the same things and enjoy the music. I’m obsessed with all the tables being turned in all of the punk sub-communities I’m a part of — so many women-fronting melodic punk bands, people of color fronting bands of all genres, discussions on race or gender being inherent to so many stages from basements to arenas in forms I’ve never seen before. I hate what the world has come to, but it’s important for me to appreciate when entire communities raise their consciousness.

The uprising of white supremacy is at the forefront of my rage and the walls I’ve built around myself lately. I think this way of thinking is adjacent to misogyny and homophobia, too, so I don’t think I even need to elaborate how this consciousness (that is so old, yet hip) is a bigot-end-all. I’m upset about folks who have the power and ability to alter the problem but would rather focus on neutrality instead of place themselves in the world.

I literally forget every dream these days. I just remember vague details from most recent years. I do remember some exceptionally wild ones from throughout life, though. The most recent is from 2012. I was in a group of good friends who were all gushing about how talented my ex is and how they all want to do projects with him. I was very uncomfortable and wanted to cry but eventually snapped and was like WHO CARES?!?!? And walked away.

In real life, I was in a romantic friendship situation with said ex, and that instability would constantly make me feel horrible, since I was deeply not over this person. So I leave the party and go to the back patio which happens to be FULL of baby tigers and some mother tigers laying around the pool. I got on the couch and snuggled with one and started talking to it, asking when things will be easier. I noticed my mom walking out in the yard with trash bags, collecting the baby tigers—SO I TOLD HER TO STOP. I said they were my friend. THE END.

(Spoiler alert: I actually researched this dream and found out tigers represent personal power and dealing with insecurities; which makes this less funny.)

I always get Gemini about this question because everything I pursue is my “dream”- my band, memoirs, tarot deck. So I’m going to stick to something I don’t have control over: Maybe a tour festival, like Warped Tour (we all get RVs) with Choked Up featuring, like, I don’t know … Green Day / Against Me / Downtown Boys / Alice Bag / Rancid / RVIVR / Los Crudos / Bad Cop Bad Cop / Bombpops / Propagandhi / and maybe a Spitboy Reunion? I don’t know, it’s just a thought.

I don’t know, probably being anti-social in nature? Tuesday will be my actual weekend, because Choked Up is playing with ALICE BAG and NYC Latinx pokeras Ratas En Zelo in Brooklyn. It’s on a roof so I hope it doesn’t rain.